The 25th edition of the Crocodile Trophy kicked off in Cairns under blue skies, dusty trails and searing temperatures as it headed for Ringers Rest. Australia’s most iconic mountain bike stage race would treat riders from around the world to a day filled with tough ascents, wicked descents and a trip to Davies Creek Mountain Bike Park before reaching Ringers Rest bush retreat.

They say the Crocodile Trophy is the most Aussie-Euro mountain bike event on the calendar. For years, Europeans have flocked Down Under for a true Australian Outback experience. More often than not the race is dominated by overseas entrants both on the start list and at the top of the results but this year former road professional Michael England showed his class by taking line honours at Ringers Rest and with it, captured the first leader’s jersey of the eight-day race.

Sprinting to the line ahead of Brandan Marquez Fernandez (ESP), the born and bred North Queenslander England might be here to enjoy the atmosphere but there’s clearly still a little racing spirit in the tank. Third place was Alan Gordon from South Africa, a name I was familiar with from last year’s Pioneer, who took the final place on the podium. Nearly eight minutes after Michael crossed the line, I came in with a charging Bram Saeys from Belgium.

‘Sorry I wasn’t much help at the end, mate’.

In the Elite Women’s category Angelika Tazreiter, the 2018 Austrian national marathon champion showed she’s a force to be reckoned with for the overall classification with a seriously impressive 13th-overall. Given Angelika’s climbing ability witnessed up the first climb to Copperload, I wouldn’t be surprised to see her steadily chip away into the top-10 come Port Douglas. 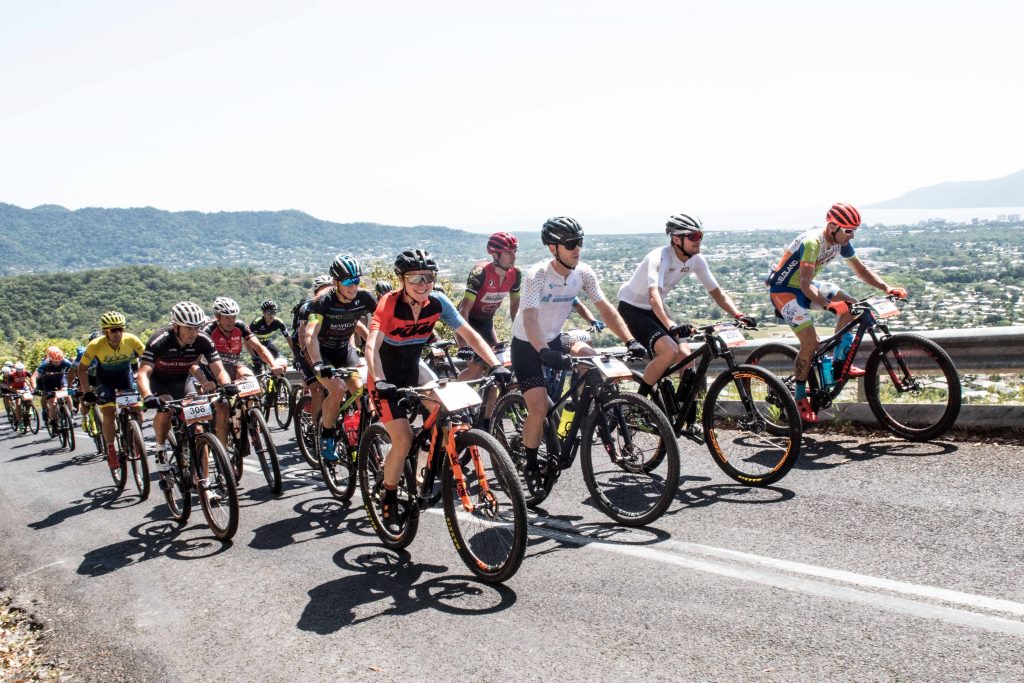 Two years ago I lined up for my first Crocodile Trophy full of enthusiasm. I’d found a renewed love for off-road and had thoroughly enjoyed spending a large part of the year building up for the event. If you love cycling and adventure, the Croc should be on everyone’s ‘to-do’ list. Despite any preconceived ideas of the race, it’s bucket list stuff. But I’ll be honest, finishing the week in Port Douglas two years ago left me feeling content but I wasn’t buzzing to come back again. The race, in my opinion, needed some work to bring it up to the high standards many of us currently expect from cycling events.

The 2017 Croc was everything I was promised but I wanted more. It’s a big ol’ country and there just seemed to be something missing from making it truly great. Fast forward two years and there’s a local guy called Bren Skerke who is steering the course design ship. This bloke has ridden all the trails, knows the ones to skip and the ones that must be included and has taken the all-important task of putting the stage plans together. It’s a huge change and perhaps it’s too early to call (I’ve only ridden one stage) but my feeling is he’s given what is needed to attract more Aussies up this way. 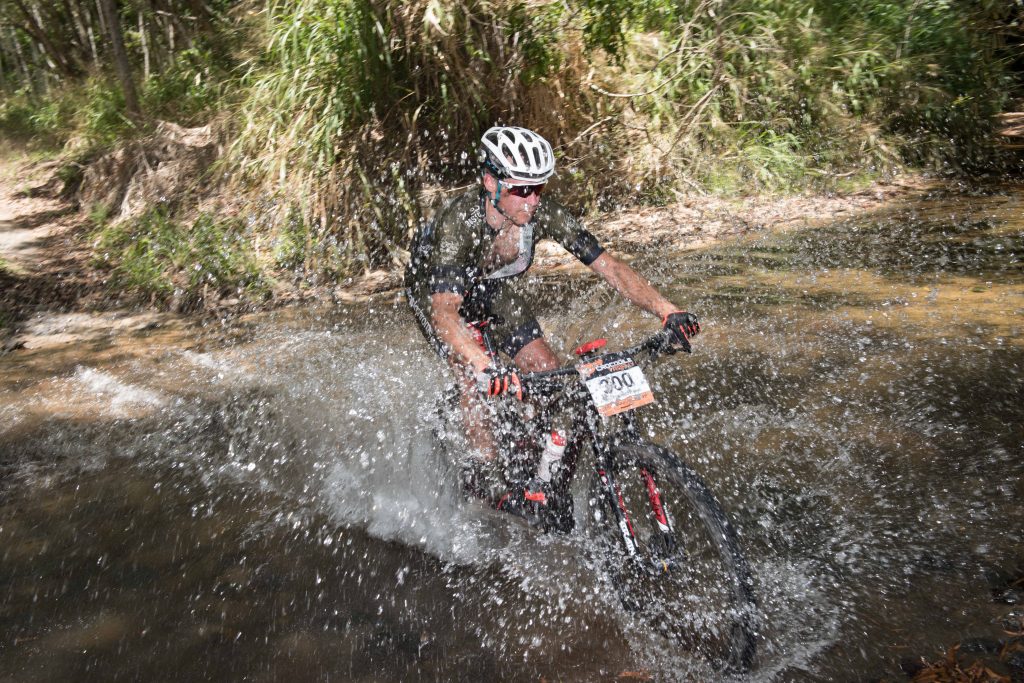 Now I’m here riding the 25th edition with one Croc, two Pioneers and a Mongolia Bike Challenge in the cycling memory bank. These events – call them races if you wish – really are about taking each day as they come while simultaneously thinking about the next. Don’t go too deep too early. That’s the ticket. But in similar vein to Michael, my brain doesn’t always listen to the body once that number is pinned on. This year I’ve decided to really try and do things differently and not go out guns blazing, spraying the TSSs all over the shop, until the race’s end is really in sight.

The stats for Stage 1 don’t really tell the full story because with an average heart rate of 162bpm for over three hours (my threshold is around 168bpm), you’d think I failed at riding within myself. I’m hoping however, my ‘feelings’ of intensity mean that I didn’t go too far into the red and that I’ll have a greater chance of riding consistently throughout the rest of the week as opposed to collapsing after four days.

The heat was the main factor today with exposed roads and trails seeing many riders’ heart rates sit towards their ceiling for the duration of the stage. It was so hot by the end that I drank close to two litres of fluid in the final 20km. That’s warm! Fingers crossed I’ve rehydrated and recovered sufficiently to go at it again with the same calmness tomorrow.

A relaxing 45 minutes in the NormaTec Recovery Boots will certainly help things along. These have been generously provided on loan for the Croc but – this is between us – they might get ‘lost in the post’ when it comes time to give them back.

Tomorrow’s stage starts and finishes at Ringers Rest and features 76km of quite hilly terrain with just under 2,000m of climbing. The race booklet says we’ll enjoy around 20km of solid uphill across three main climbs called the Mt Edith Loop but thankfully, all that up is rewarded with plenty of down. As mentioned above, Skerke’s course design means we get two nights here with the next stop being Wondecla – where we also get two nights. If you’ve done one of these sorts of events, I don’t need to say how nice it is not to pack up each morning. It’s the small things that make the difference. 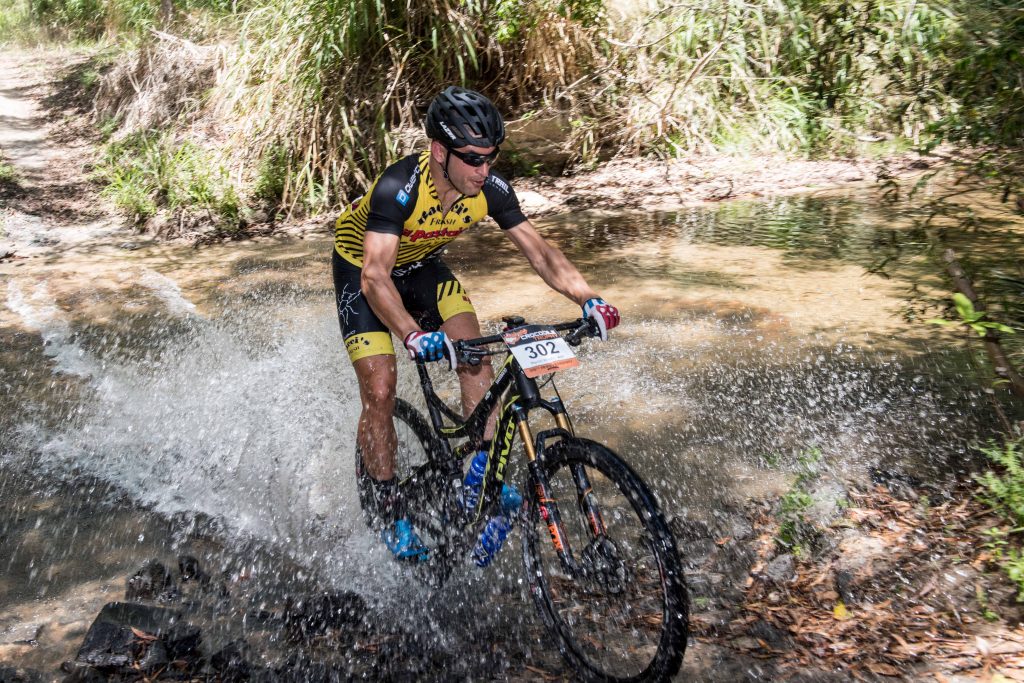 A couple of nights ago Michael England told me he wasn’t here to race. We were at a local Thai joint in Cairns and he was enjoying a drop of red with his meal. Not racing? Cool, I’ll have a glass of pinot too. Michael certainly looked ready to race but having hung up the professional wheels back in 2011, there was every chance the mid 30-year-old was really here to soak up those Croc vibes.

It seems that’s not quite the case.

“I’m born and bred in Gladstone, North Queensland and so I tend to do well in these sort of conditions”, Michael told Cyclist during lunch under the shade of the Ringers Rest bush ‘restaurant’. 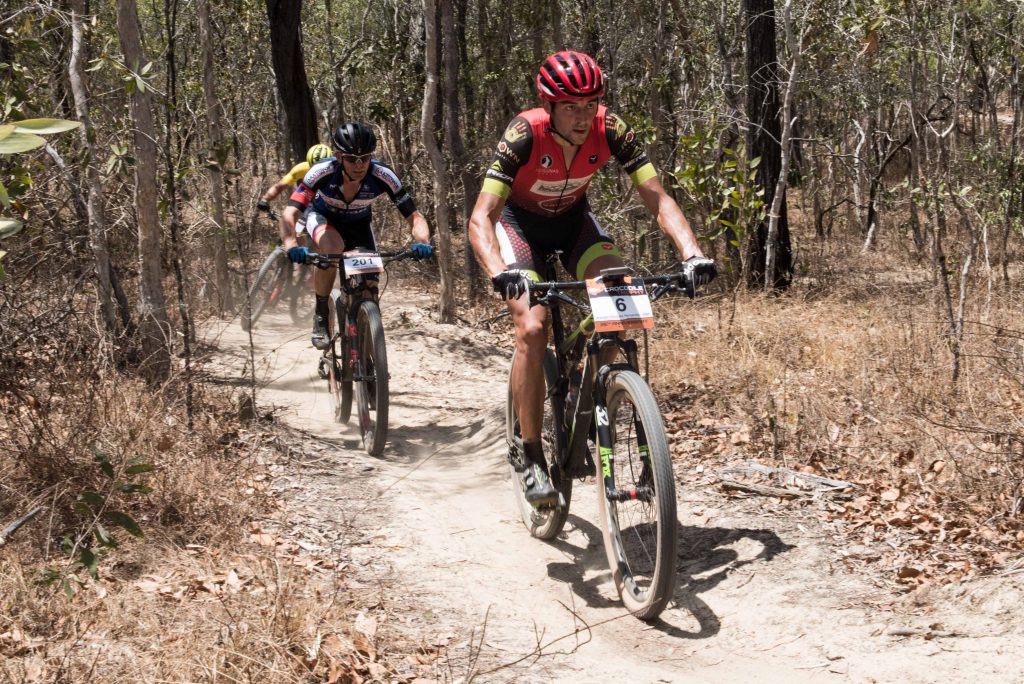 “The idea was, and still is, to ride the Croc with a super relaxed attitude. Perhaps that’s what played in my favour today as I really didn’t have overly high expectations. I love to race but I want to enjoy the whole atmosphere too. That was the main driver to sign up. I still love riding and I simply enjoy pushing myself as hard as I can. If that lands a result then it’s a huge bonus. As someone who’s raced full time, I don’t think that will ever stop. I love the challenge”.

Now that Michael is wearing the leader’s jersey and goes into Stage 2 with somewhat of a target on his back, I asked if that meant he was now ‘really racing’?

“I’ve done a few shorter off-road stage races including Easter in the Alice and The Redback but I retired back in 2011 and it’s not like my fitness is anything close to what it was back then. I’m not sure I can maintain this sort of pace for the entire week but who knows…I always enjoyed the hillier road tours”.

With seven stages and more than 10,000m of climbing to go before the race reaches Port Douglas, one wouldn’t be crazy for thinking Michael could do more than simply hang on. 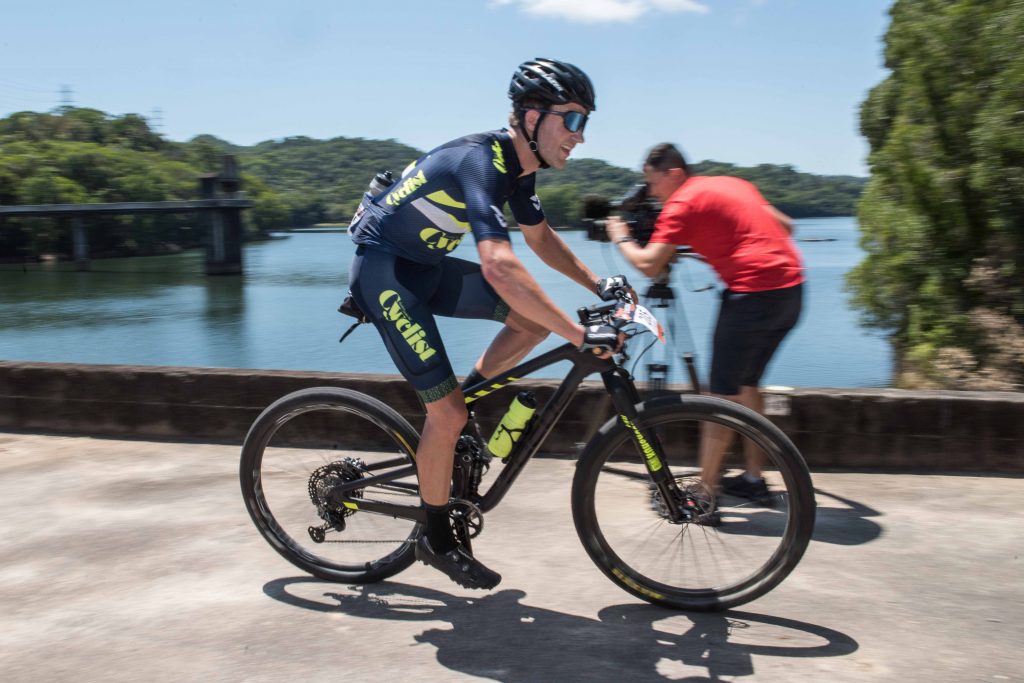 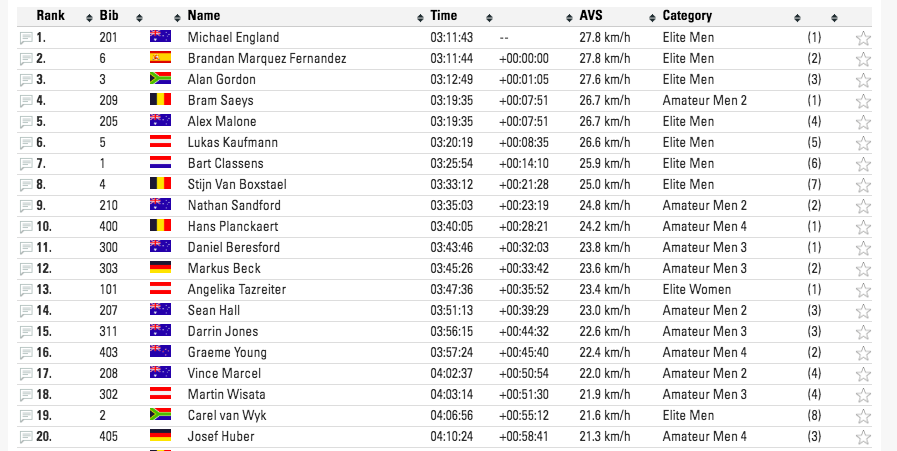 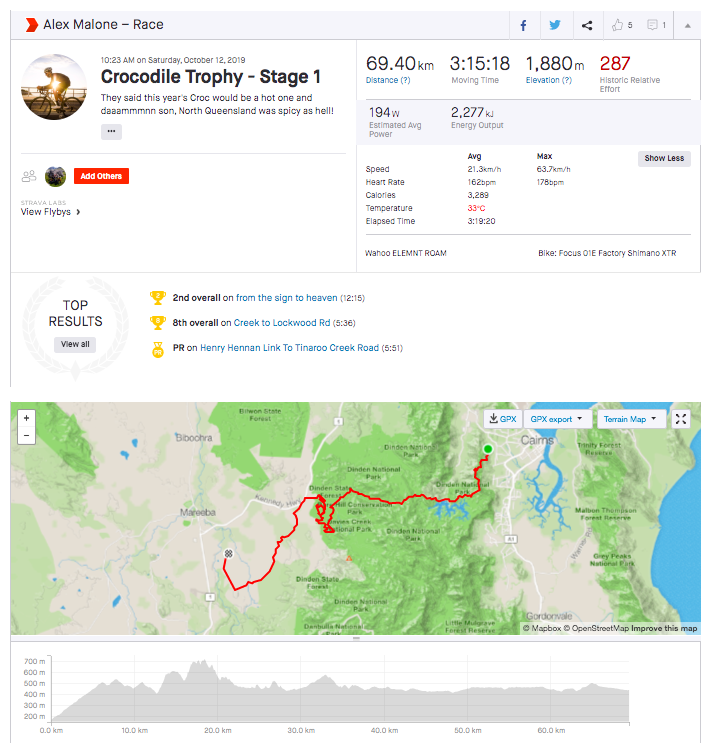 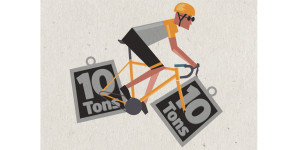 For many riders, the first components they will look to upgrade on the bike to achieve gre...