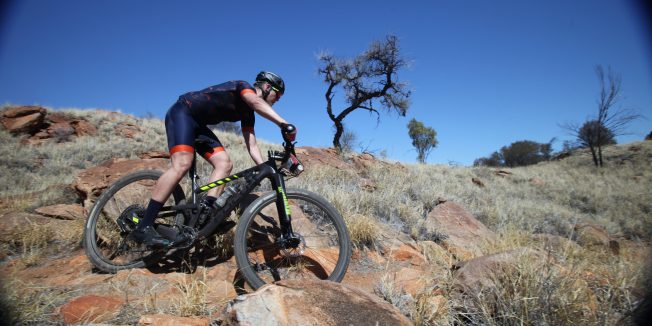 When the opportunity arose to throw a rookie mountain biker into the stage racing ring, we couldn’t resist. Thomas Treloar is on a mission this year as he aims towards The Pioneer and if practice makes perfect then a trip into the outback of Alice Springs and The Redback should have him returning like a fully-fledged professional.

If you’re like me, an Aussie-born…Aussie, then it’s likely you’ve spent more time travelling abroad than within our own backyard. Alice Springs sits on a long list of more local wonders that I had always planned to visit at some point. So I jumped at the chance to venture to this intriguing part of the outback and compete in my first MTB stage race at The Redback. I’ve never ridden my mountain bike more than a couple of days in a row – what could possibly go wrong? 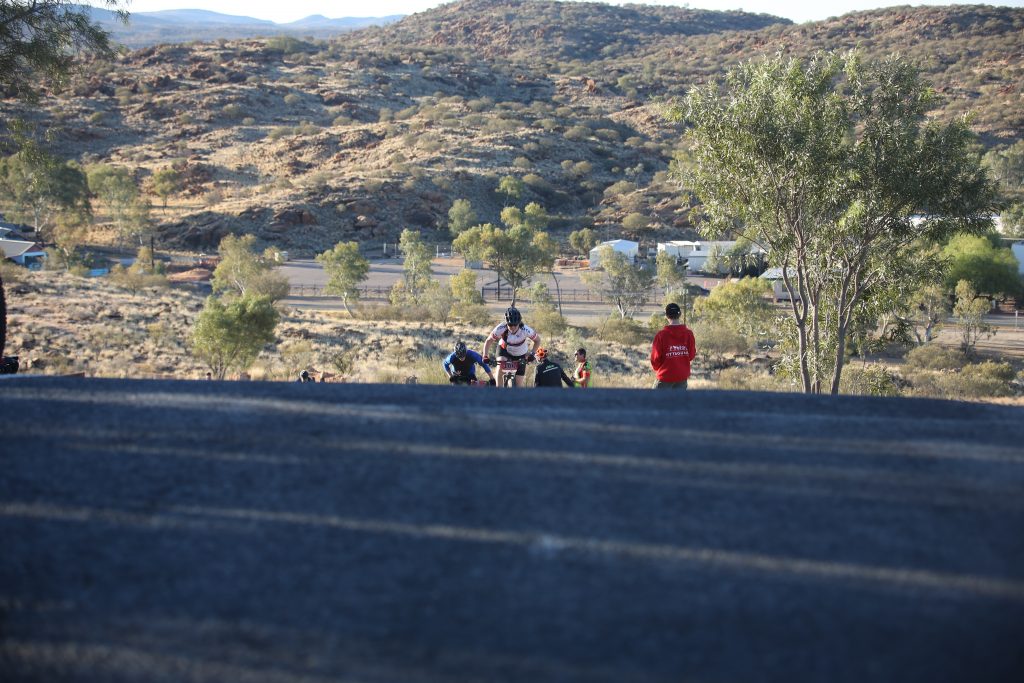 I’d surprised myself by just how smooth sailing the run up to departure had been. However, I was soon to hit a pot hole when Qantas failed to read the memo around the priority baggage for myself and ten unfortunate others. Eleven bikes, including my brand new Focus 01E, failed to fit on the plane according to the good folks in the handling department. With the next flight not till today (Thursday), it looked like a few of us would miss the start – unless they created a foot race category.

I won’t lie. The disappointment was strong amongst the group of abandoned riders. Shortly after pulling myself together and failing to google any suitable rental options, we went to the race organisers for a chat. In most situations I wouldn’t have been surprised to be told ‘too bad, so sad’ but this is the outback mate, a little bit of Aussie spirit is what this town was built on. So, with a few changes to the schedule, it looked like all entrants would be granted a Day 1 sleep in with the start pushed back a touch later.

For those who haven’t been to Alice, it’s a different world. It’s difficult to really describe but it’s just as though we’re here as guests of the land. You can’t escape the environment. Many believe Alice is pancake flat but there are rock formations and little rises everywhere. Sadly Uluru is a little out of view being over 500km. The dry, 50-metre wide Todd River runs along the side of the town and is a prime hangout for locals, who could be head singing late into the night. Living deep within the Sydney urban jungle, it was somewhat comforting to be heading off to bed with a new form of white noise ever so faint in the background. 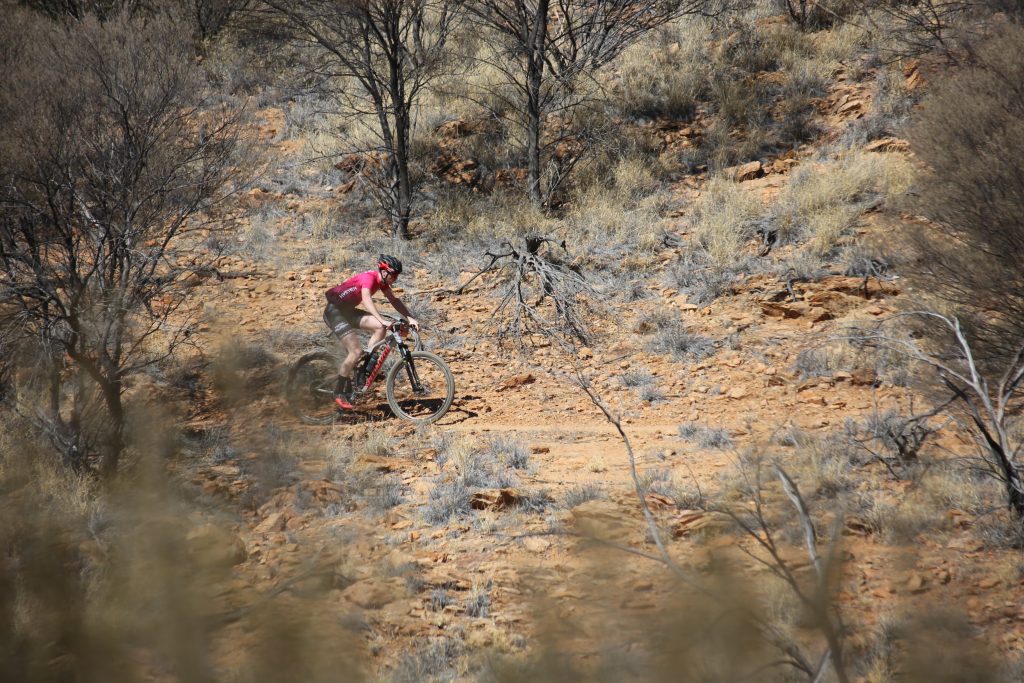 It’s 1000 and the bikes have arrived! While some of our motley crew chose to build their bikes in front an audience of enthusiastic Price Is Right onlookers, I selected a quiet area to unpack mine. It’s my first time using the Scicon AeroComfort MTB 3.0 bag and it held up very nicely. This system is compatible with all matter of mountain bikes (there’s also a specific road model).It’s a quick pack and unpack – a good thing to have today. It politely keeps the seat post in place (assisting with the bag’s structure)  with the handlebars also staying on the bike.

Day 1 presented two stages; a 39km XC-style race and a twilight hill climb time trial of just 300m. How hard could that be?

This racing thing is all pretty new for me so when the police rolled to the front of the bunch, lights flashing, for the first 3km, I felt like a true professional. The locals had lined the street and were cheering us on but the neutral pedal didn’t last long.

The car pulled off, the flag dropped and we were off. Racing.

Once the chaos at the front calmed down, I was taken aback by the amazing scenery. It’s dry out here and yet green trees and scrub are everywhere. The trail network is very impressive with around 90 percent of the stage running on lovely, albeit loose over hard pack single track. With little room for passing, the small opportunities that did pop up were filled with risk. Get it wrong and you’d easily come off second best with large hidden rocks, impassable scrub and deep sand featuring just off the race line.

I found myself in a group of four and even amongst the heavy breathing, we all remarked how impressed we were with the trails. Smooth and flow-y sections matched with technical climbs – just how I like it. I was having a blast.

It’s always a great feeling riding through an inflatable finish archway. The photographer was primed and ready to snap my photo and whilst I did my best ‘that wasn’t event hard’ impersonation, I’m sure the image tells the real story. Our little posse of newly formed trail mates proceeded to de-brief over a slice of chilled watermelon. There were a few open wounds, some very bloodshot eyes, some bodies lying motionless on the ground but all in all, everyone had a great time.

A quick nap, some food and we were back at it for Stage 2, the 300m hill climb up Anzac Hill. Who would have thought you could hurt so much in one minute! The short stage was lined with spectators and competitors cheering you on, all of which became a blur by the end. The view from the top was spectacular and with the sun setting over Alice Springs it was a great way to wrap up the day. 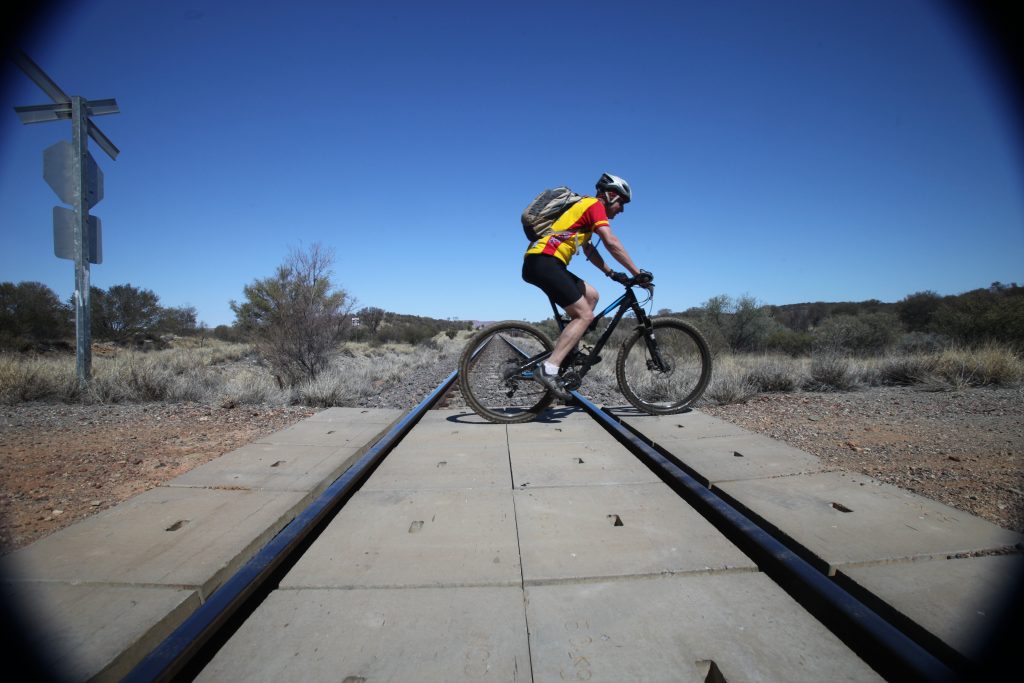 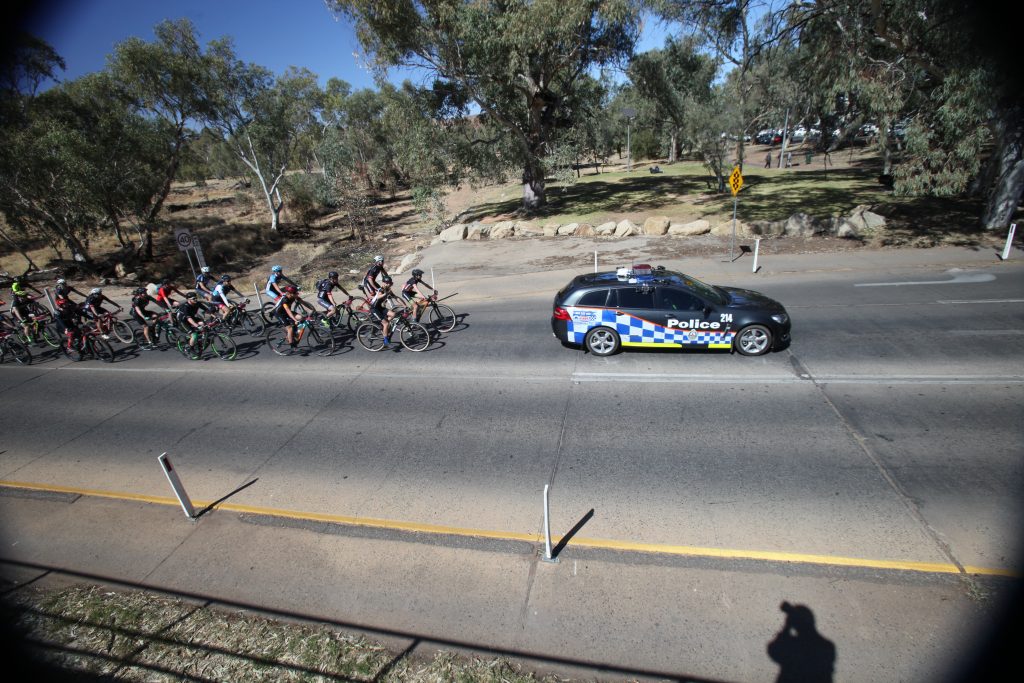 Before any big ride there is always talk about hydration and nutrition.

I went minimal with a single 700ml water bottle in the main position and a specially brewed finishing bottle containing a mixture of Endura Rehydration formula and a splash of cola. This, and an Endura gel (with a couple of spares in my pocket), was more than enough on top of a good breakfast.

I had to think carefully about how I was going to get the liquid and food in. It’s not easy when every corner is unknown. Riding one handed on trails you’ve never seen in your life can quickly become problematic. For me, I drink whenever there is an open section and I can see a little in front. Fingers crossed this is a good strategy to employ for the remaining stages of the event. From what I saw, the vast majority of riders were using a hydration pack and I would say least risky option – but I’m here to race! There were also more than a few gels and other assorted food stuffs positioned onto top tubes giving quick access to your fuel. Just ignore the haters who tells you “it’s not a triathlon”. You can throw him a gel when he’s pulled over with hunger flat later in the race. 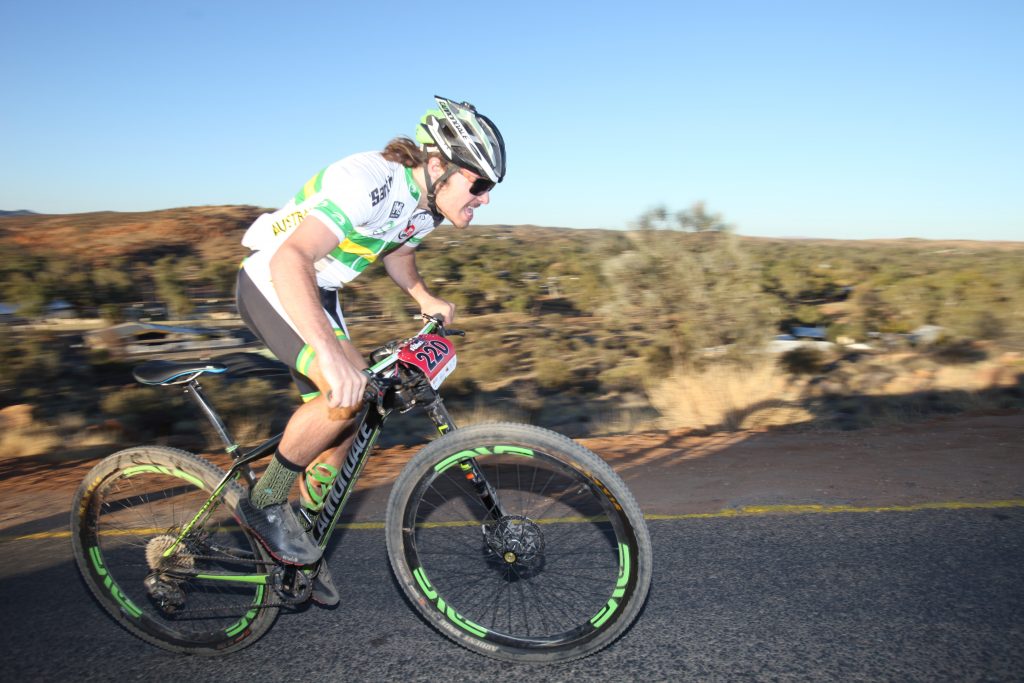 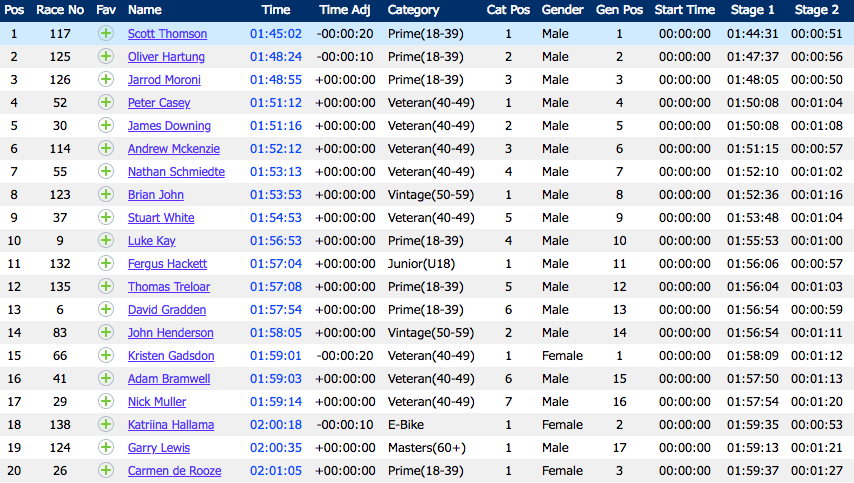 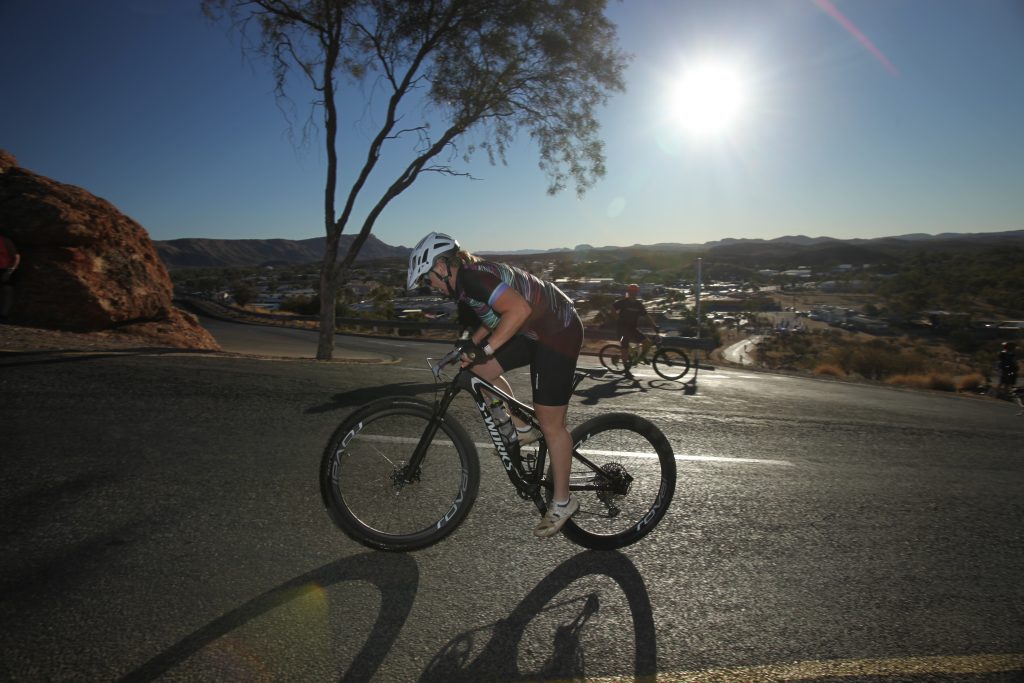 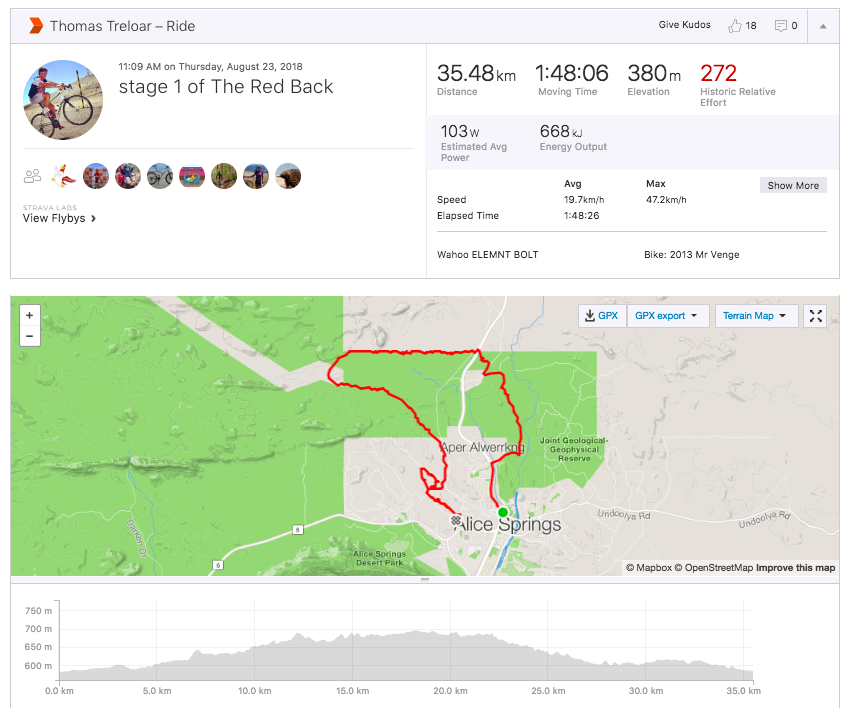 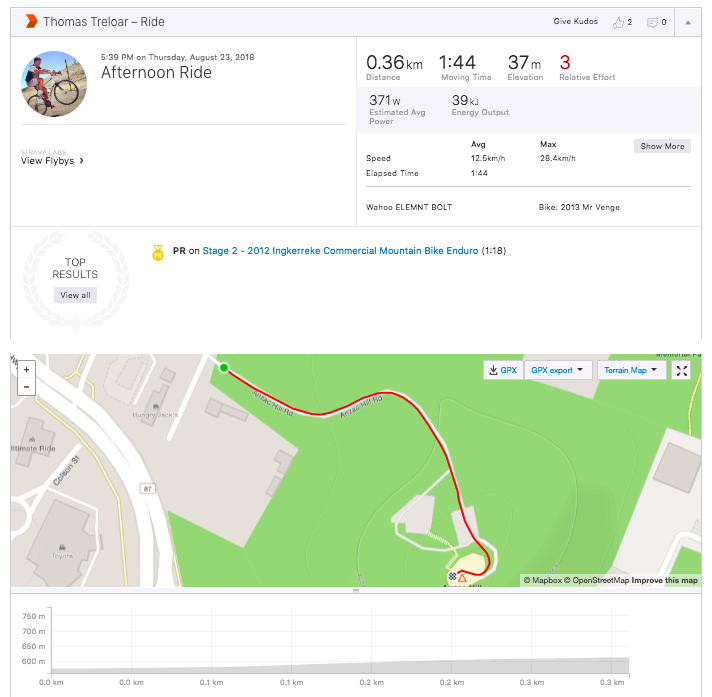 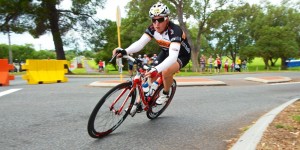 UCI World Cycling Tour competitor Rick Jordan tries to get a head start on his training, b...