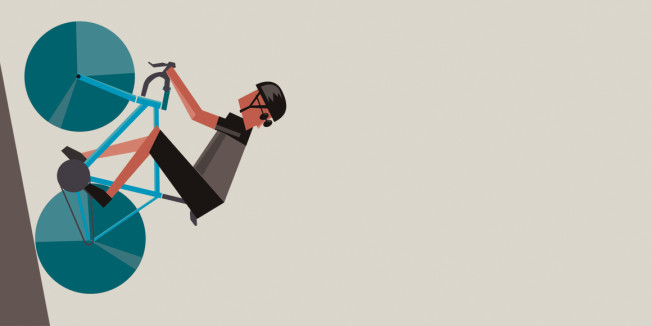 How steep is too steep?

We’ve all struggled up slopes of 20%, 25%, even 30%. But just how steep would a road have to be before it was unclimbable by bike? Cyclist investigates

It’s a strange thing – our pursuit of steepness. It’s common to hear riders boasting of conquering Alpine cols that drive relentlessly skywards at gradients of 20% over several kilometres, or spikes of up to 40% at the centre of the hairpin. But remembering that a 100% gradient only makes for a 45° slope – one metre vertical for one metre horizontal – surely a steepness approaching 100% wouldn’t be impossible to ride. Would it? We decided to seek out the experts to find out.

First things first. When we say the ‘steepest gradient’ we’re not talking about those freakish spikes in the road’s steepness, or the vertical platform of a half-pipe. We can only consider a persistent incline that a road cyclist can attempt to ride for a reasonable length of time.

Oddly, power is not a limiting factor to tackling the steepest of climbs, says Rhett Allain, professor of physics at Southeastern Louisiana University and long-standing blogger for Wired magazine. ‘If you don’t care about speed you can go up any incline with very little power as long as there’s enough friction,’ he says. ‘For instance, you can get tiny little motors to raise a very heavy load if you use enough pulleys.’ If you can create the right gear ratio on your bike, then even with a minuscule power output you could climb any gradient – in theory.

Reality is different. A gear ratio that allowed you to climb insanely steep inclines would require you to spin your legs like crazy while only creeping forward. You would soon topple over. Allain puts the minimum speed you’d want to tackle a climb at as walking speed, or around two metres per second. By his calculations (which are a little too convoluted to discuss here), he places the maximum incline for a power of 422 watts at a speed of 2m/s (7.24km/h) as being 40%.

So 40% might be where human power finds its match in an incline – beyond that you might as well walk. But for those of us less interested in practicalities, and more interested in proving that we can’t be beaten by gradient, it must be possible to climb an incline greater than 40% if we’re prepared to go slow enough. What we want to know is at what angle the laws of physics will prevent us from being able to climb regardless of our power output or gear ratio. 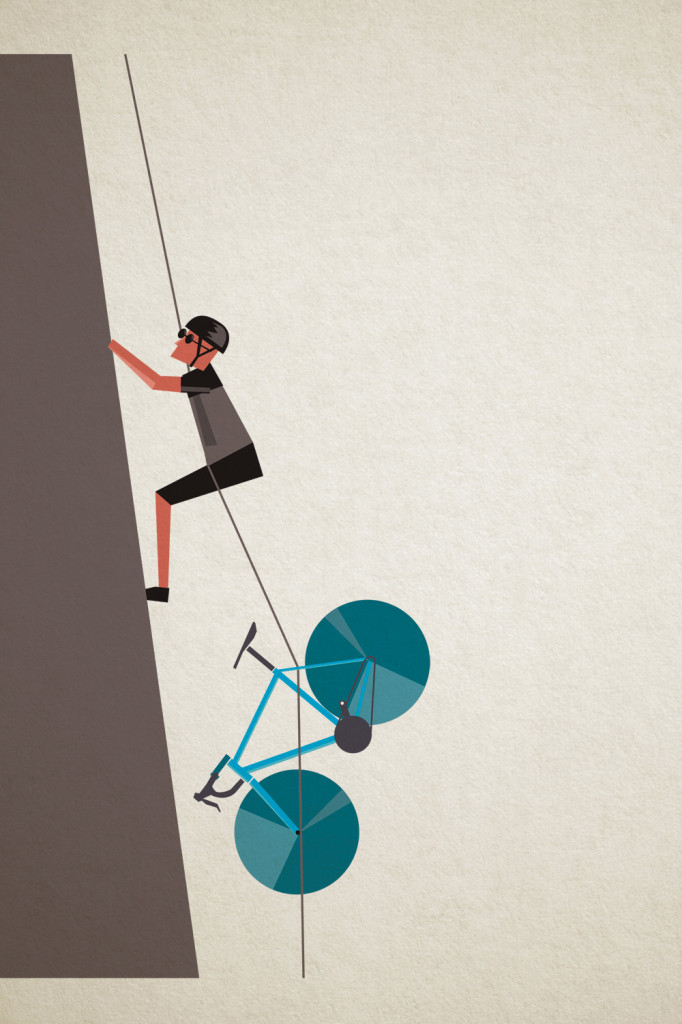 If we were to ride up a hill that got steeper and steeper, there must come a point where we would simply tip over backwards.

Keith Bontrager, a pioneer in the role of centre of gravity [CG] in bike fit, explains, ‘It is not simple to find the rider’s CG by mechanical means.’ But he does put the CG of a climbing rider on a line ‘2-3cm behind the pedal spindle at the nine o’clock pedal position’. By our own (fairly unscientific) calculations we reckon the average rider, seated normally, would have a CG approximately 58cm ahead of and 120cm above the point where the rear wheel touches the road.

Now, to work out the point at which the rider would fall backwards we have to do a little trigonometry. (If you’re interested: angle of incline = 90 – (Tan-1 (height of CG ÷ rear wheel to horizontal CG). From that, we get the answer of a tipping point of 25.8°, or 48%. So there you go, the absolute steepest gradient
is a measly 48%. Or is it?

When the angle gets steep you’re unlikely to sit ‘normally’. Bontrager argues, ‘A rider prevents tipping over by leaning forward on very steep climbs. This is common for MTB riders.’ So we recalculated based on a rider being extended out over the bars as much as possible, and we found a new maximum incline of 41°, or 86.9%. Of course, leaning so far forward on an incline will remove some traction from the rear tyre, possibly causing the bike to slide alarmingly down the hillside. Which brings us to the main restriction in our quest for steepness: traction.

To move on a bike at all, you need friction to oppose the movement of the tyre. As the incline increases, the friction reduces as the two surfaces are being pushed together less intensely by gravity. Christian Wurmbäck, product manager for Continental, says, ‘I would say the grip of the tyre will be the
first thing to fail on a very steep incline.’

But finding the exact tipping point is tricky. To start with, we have to know the coefficient of friction for a tyre – essentially how sticky it is. That’s not easy to determine, as Wurmbäck explains: ‘You cannot really say. It depends on the surface, whether it is wet or dry. The idea that there’s one number that gives a theoretical grip for all conditions – it doesn’t really exist.’

So while the reality may be more complex, estimates for coefficient of friction for pure rubber on tarmac vary from 0.3 on wet concrete up to 0.9. Professor Allain’s calculation, based on an estimated coefficient of friction of 0.8 (which he describes as ‘optimistic’) puts the maximum angle that tyre traction would tolerate at 38.7°, or around 80%.

At 80% that already makes traction of tyres the first point of failure, but this may still be an overestimation of possible steepness. The coefficient of 0.8 relies on the idea of an all-rubber tyre, which is rare. Wurmbäck says,
‘We want the tyre to be stiffer and longer lasting than pure rubber would be. If you have a super-stiff tyre, it doesn’t stick to the road as well.’

What’s more, inclines of more than 30% often require concrete paving rather than tarmac, for which estimates for a coefficient of friction with rubber are closer to 0.6 when in motion. Putting that figure back into Allain’s equation, traction may fail at 60%. That’s without getting into the complexities of the weight distribution between the wheels given the radical climbing position a rider must adopt.

Wurmbäck says, ‘There are ways to drastically increase friction – like putting glue on the surface. But in more practical terms, you want a warm tyre and warm surface, on a hot day, with less tyre inflation with a wide tyre.’ As well as the coefficient there is also surface area, created by the tyre profile, to consider. But we would probably need another couple of pages to even scratch the surface of that one.

So multiple, fluctuating factors play a role in limiting the steepness of the most vertiginous cycle climb. But should your gearing, power and radical climbing position allow you to go north of a 60% gradient, you can probably expect your traction to let you down at any second. Unless you have a pot of glue handy. 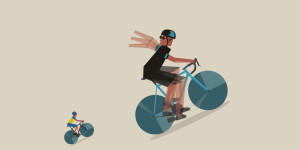 The burning question of optimal cadence had been debated vigorously since foot first met p...