Peaks Challenge Falls Creek will push any cyclist to the very limits of their ability. Cyclist takes a look at the longstanding event that continues to draw crowds for what is arguably Australia’s toughest one-day mass participation event.

I can hear the cheers. It’s all downhill now to the line, but that’s a worry in and of itself. Being totally spent means navigating my bike at speed is almost as challenging as getting over the last of the rises (no one really crashes riding up a hill now, do they?). The decision to ride front bunch the night before Peaks Challenge seemed a good idea at the time. Going for the course record was a challenge laughingly accepted as I had a second helping of dinner. Seven and a half hours after starting, rocketing towards the finish line, I had question marks over my sanity. And I vowed to never climb anything other than ‘into bed’ for the rest of my days. My girlfriend was waiting for me 10 metres past the line – I nearly wept as my salty encrusted sweaty arms embraced her. The thought of food didn’t even enter my mind, I just wanted to be done. Even if my legs weirdly thought they needed to keep going, as if stuck in a cycle of perpetual motion. 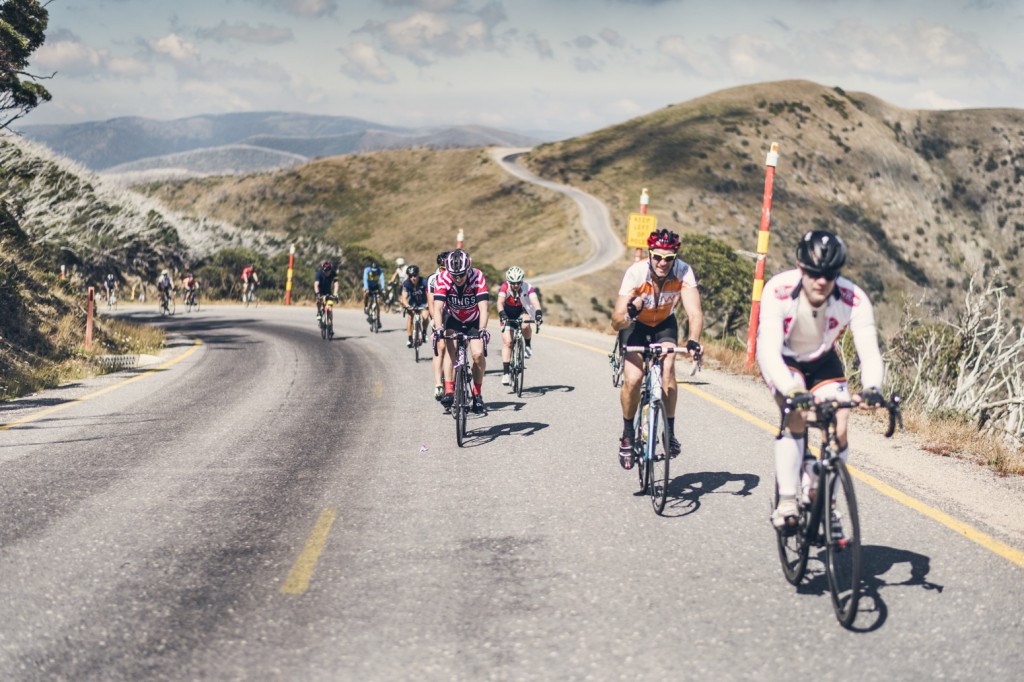 This is what riding Peaks Challenge offers. The first rider across the line that day set a new Falls Peaks course record, but the onus isn’t on you to go quite ‘that’ nuts. It’s not an official race. But it is timed, so coffee shop bragging rights are on offer. As is a ‘sub 10 hour’ jersey – which are quickly becoming a respected piece of kit on bunch rides, such is the reputation and recognition of what Peaks Challenge serves up. It’s no cake walk. Nor should it be. The course is yours to make it as hard of a challenge as you’d like. But make no mistake, it can be many things – but ‘easy’ isn’t one. Wouldn’t be much of a challenge if it was. 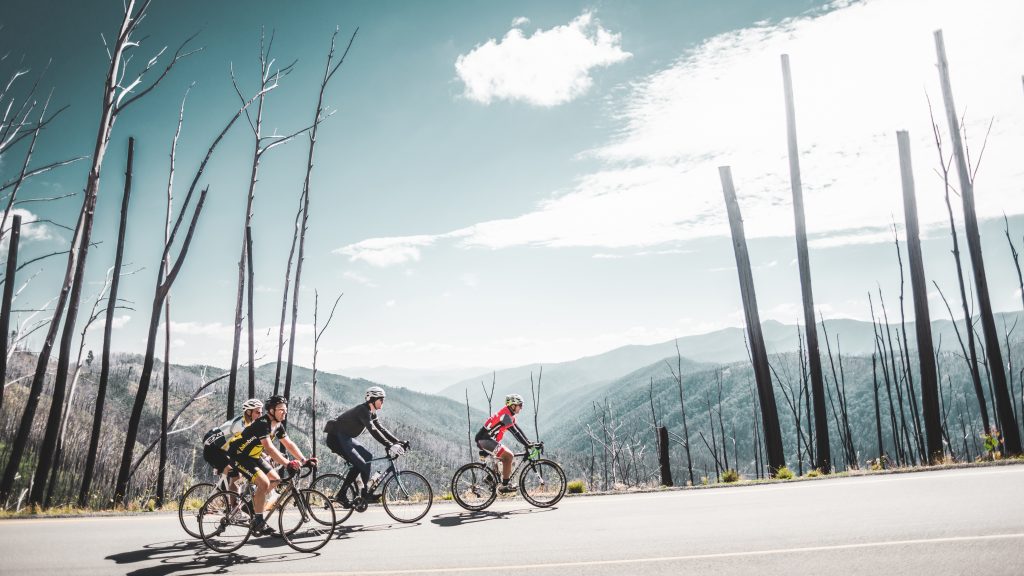 It starts locally. Suddenly a 100km ride isn’t massive. Then you break 2,000 metres of vertical gain in a ride. It’s all part of that push. To find the edge. To see how close you can push the body to it. And if one Peaks Challenge wasn’t enough to find where that edge is for you, Australia is rapidly becoming a sportive-crazed nation filled with events of all distances and difficulties. This year’s Gravel Grit Laguna might lack the distance and elevation gain of Peaks Challenge but it more than makes up for it with a festival-like vibe and a gravelly course to keep you on your toes.

The one. What started it all. The incumbent against which all other sportives are measured. And for good reason. Starting with an adrenaline filled sunrise descent from Falls Creek, riders begin by battling wind chill in addition to (what is normally) a cold morning. The age-old newspaper stuffed down the front has done the trick for me, jettisoned in a bin at the top of the first peak, Tawonga Gap. But my teeth still chatter, as much from nerves and as the cold.

There are large variances in elevation – you start at nearly 1,600 metres elevation, reach over 1,800 on Mount Hotham and still yo-yo below 1,000, only to again have to ascend back to Falls Creek (and back over 1,600 metres). This makes what you choose to wear more vital than anything else; there’s no such thing as poor conditions, just poor clothing choices. Fortunately Bicycle Network appreciate how flukey the Victorian Alps can be, so clothing drops (so you can either change or drop off) are along the course.

Getting through a day like this requires an understanding of pacing. Tapping a steady tempo up climbs should be the aim. It’s only a couple of kilometres from the base of Falls to the base of the first peak, Tawonga Gap. Don’t get sucked in to going up it like a gazelle, because even at only 6% for 7.5km it’s enough to mean you’ll zap the legs far too early into the ride. Also beware of the same enthusiasm on the descent off Tawonga – it’s fast and loose. Use those bike handling skills you’ve refined over the summer months.

Last year (as has been the case a few years running), the climb up Mount Hotham was in near perfect conditions, with the view from the top especially breathtaking. At 30km long, it’s not just the view, however, that takes the breath away. A true Hors Categorie climb, you can recover on the middle section if you’ve gone too hard on the lower slopes – which includes The Meg (300 metres at 11.8%). 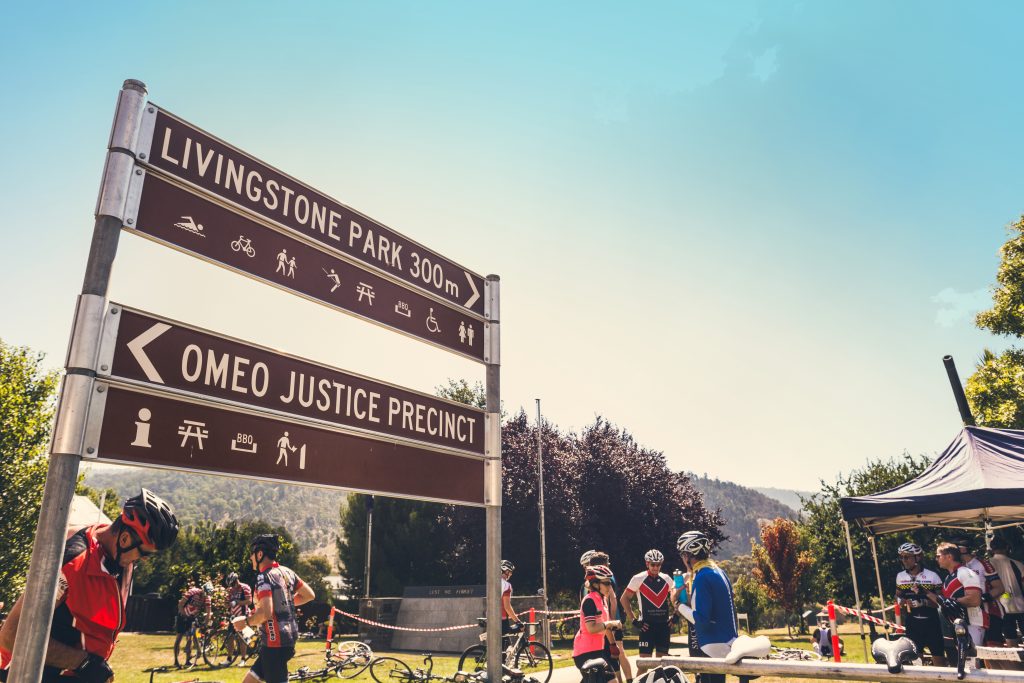 Across Dinner Plain and down to Omeo, you’ll have the chance to recover. Tapping along with a bunch will help, as even though it’s downhill you’ll need that energy. The road heading north out of Omeo, and especially from Anglers Rest towards Mitta Mitta, is (at least for me) some of the best scenery I’ve enjoyed in Victoria. A road I would never have taken if not for Peaks Challenge, the only drawback is it means you’re on the cusp of the back climb to Falls Creek. 10km at nearly 10%. If you walk, don’t be ashamed.

I’ve seen an ex-Australian elite road race champion unclip and push his bike. It is brutal. Hit Trapyard Gap and you’re close to done, but so are the legs. The final push across the alpine plateau of Falls is also exceptional, but save a gilet as it can also be chilly. Almost always windy, the Rocky Valley dam (and your sweat) add to the windchill factor.

The finish is downhill, up a little gutter and in the ski resort. You figuratively and literally finish on a high. And in joining the exclusive club of being a Peaks Challenge finisher you should enjoy all the post-ride festivities on offer. 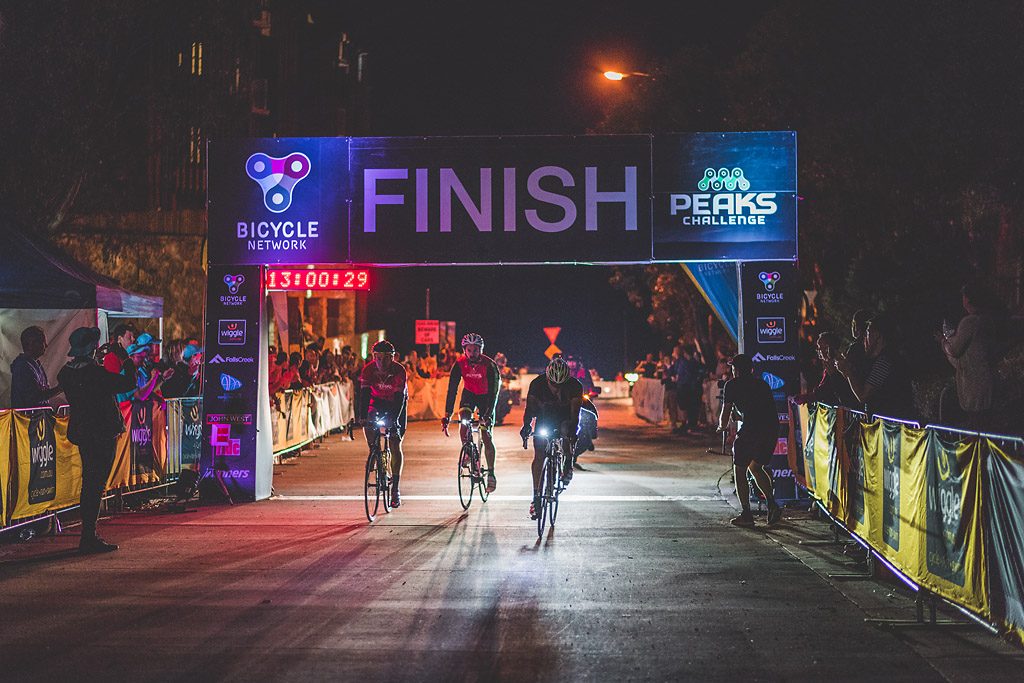 Peaks starts on top of Falls Creek mountain. The road to it from Mount Beauty is closed very early, as riders are descending by 7am. So a strong recommendation is to find a place to stay on the mountain. However given the popularity of the event rooms book up fast. To best avoid disappointment, check accommodation sooner rather than later. 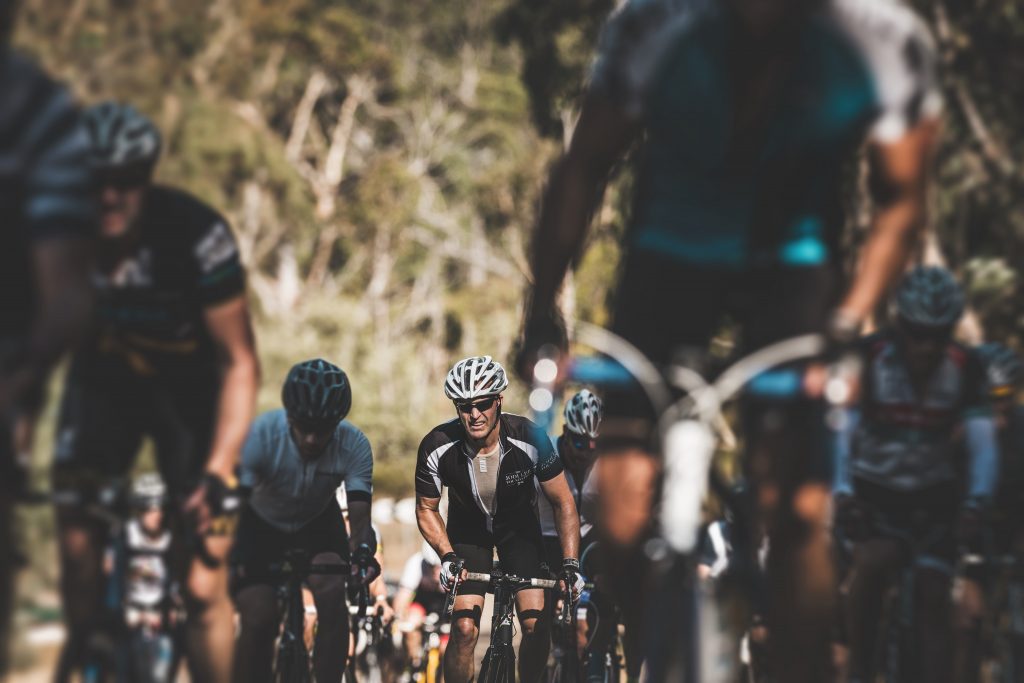 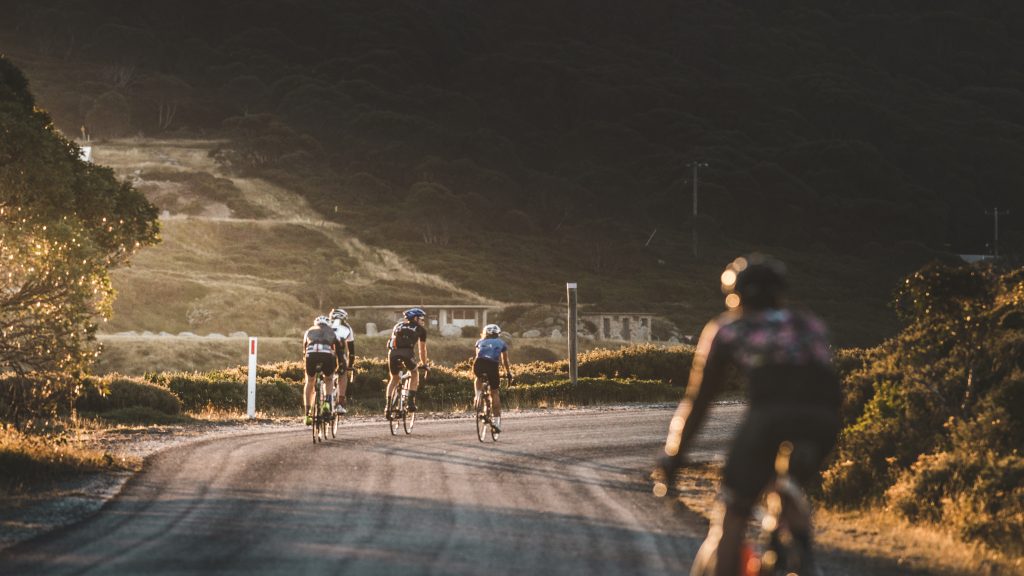 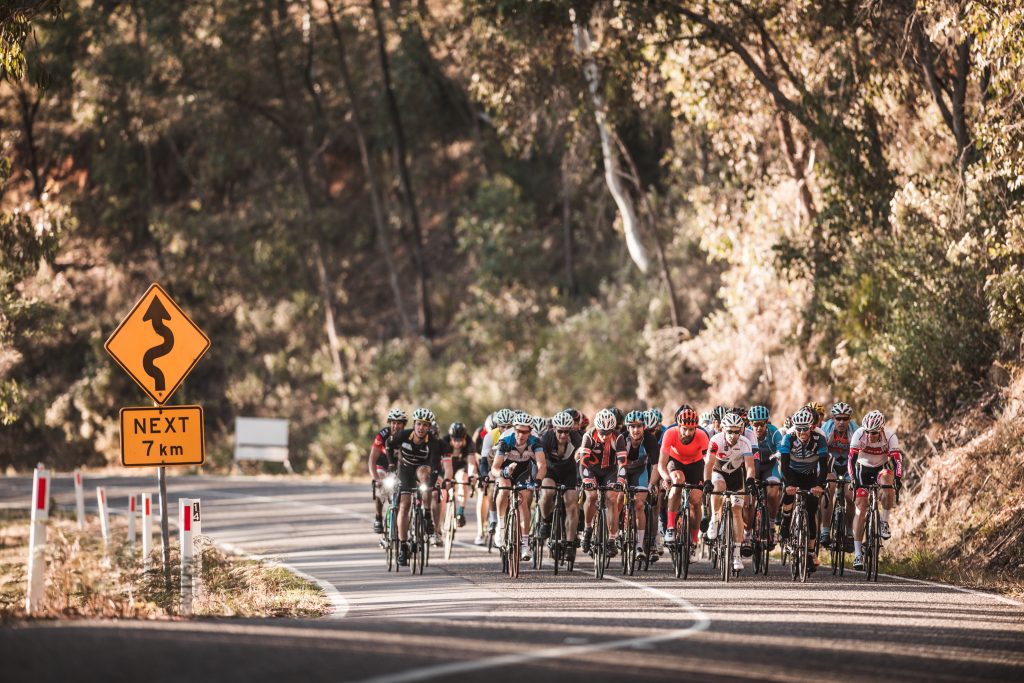 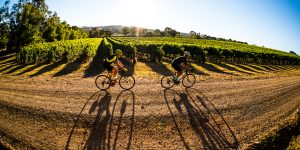