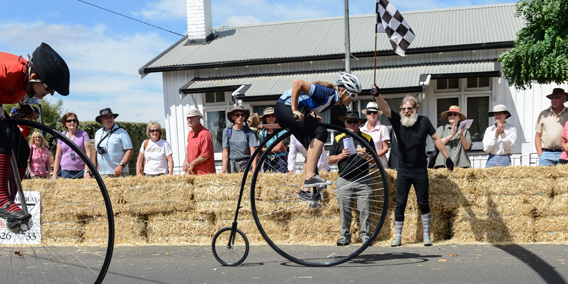 To keep a penny at speed, in a tight peloton, on the edge of a solid rubber tyre demands a dexterity born of fitness and experience.

I’m a penny racer. I started racing in 2010 at Evandale. Although riding a 52 inch for a year prior, it was my first experience of a high wheeler – or what was commonly referred to in the late 1800s as ‘Ordinary’ – at top speed. I held my line, leant low over the wheel, spun my pedals like never before and came second in the Nationals. I was hooked. I swiftly learnt how to travel with a penny – a few tools, one and half bike boxes, bubble wrap, tape, origami skills – and it now accompanies me everywhere.

I’ve raced in the UK at the London Nocturne, Great Knutsford, The Annual One Mile Classic and the Matlock and Thorseby Festivals of Cycling and also in Belgium in the Flanders High Bike National Championships.

The Australian National Penny Farthing Championships have been held for the last 31 years in this scenic setting, attracting competitors coming from all over Australia and increasingly the world. In fact, the popularity of penny racing here has helped to generate (or maybe it’s re-generate) a World Circuit with competitive seasons in the UK, Europe and US. I returned to Evandale in February this year to try again for the national title. This time the cup, sash and gold medal were mine!

Offering three days of events over two consecutive weekends, the first weekend features the annual Century Ride. Less a race and more an epic endurance event, competitors traverse 100miles (160km) of stunning Tasmanian terrain within a 12-hour deadline. Starting at dawn, the penny peloton chases big wheel shadows along winding roads out of Evandale via Longford to Delloraine for a picnic lunch by the river and back via Reedy Marsh and Bishopsbourne to a very welcoming pub at the finish. Many a friendship is forged in light banter, energetic debates and companionable silences of the daylong event, grounded in a shared appreciation of bodies, bicycles and breathtaking views. The course is mostly flat sealed roads with light traffic and a few rolling hills, but even so, 160km is a long way on a penny and a significant accomplishment for those who take part.

A completely different set of skills is required for the following weekend. Well-experienced organisers transform the sleepy of streets of Evandale with hay bales and flags to form a tight four-corner racing circuit. News camera operators take position in cherry pickers high over the milling crowds and professional race callers add to the ambience. Pennies are checked over, shoelaces tucked in and numbers pinned on while nerves grow. To crash a penny is easy. To keep a penny at speed, in a tight peloton, on the edge of a solid rubber tyre while negotiating hairpin turns (without brakes) demands a dexterity born of fitness and experience with more than a dash of daring. While encouragement for new racers abounds and competition is good-natured, it is also fierce. Racers want to win the Slow Race as much as the National Champs and the event schedule caters to a range of proficiencies including the Slalom, Novice, Biathalon, Relays, Sprints, National Championships, Veterans Championships (over 60s and 70s) Miss’N Out and the Handicap. The following day marks the 20-mile road race from Evandale to Clarendon where final trophies are awarded over a picnic lunch and competitors make their farewells.

As any cyclist knows it is not just a win that makes an event. Competitors often take advantage of the week between events to relax and explore the picturesque mountains and coastline, sample local produce and friendly culture. While many jump on touring bikes for a slow recuperative pedal, stopping at local markets for food, swimming in rivers and camping in stunning settings, hiring a car also offers a welcome break from the saddle. Along with two friends, I did the latter as we only had pennies with us and while I have toured on a big wheel in the UK’s Peak District, and it provided spectacular views, it also entailed quite a bit of walking up and down mountains. Equipped with camping gear and local market goodies we headed to Ben Lomond National Park.

We arrived at dusk, set up camp, cooked dinner around the fire and slept soundly to the nocturnal cacophony of possums and other locals. Swapping lycra for hiking gear, we walked the wild and remote trails to breathtaking Legges Tor, Tasmania’s second highest point. The route was intermittent scrub, alpine flowers, delicate moss and sharp rocky plateaus. Continuing the circuit brought us to Jacob’s Ladder, a steep and narrow zig-zag road with sharp switchbacks and an average gradient of 11.4 per cent.

Next stop was Wine Glass Bay, a spectacular piece of coastline in the Freycinet National Park. Listed as one of the world’s top 10 beaches, its name is a chilling reminder of its recent history as a site of whale slaughter, the blood in the water giving the impression of a wine glass. We camped and walked the Hazards Bay trail to the Lookout and beach, which today is stunning crystal clear water lapping on soft white sand. In Hobart we stayed with friends and headed to MONA, the Museum of New and Old Art, in the Moorilla winery on the Berriedale Penninsula. Built and run by local millionaire, David Walsh, the curious curation fuses the inspiring with the unsettling. Opened in 2011, it rattled the established art world and it is easy to see why it has been termed ‘a subversive adult Disneyland’.

Tasmania offers much more than we could possibly fit into such a short trip. But that’s ok, I’ll be back again next year to visit this remarkable place, greet old friends and defend my title. Evandale might be a small country town for most of the year, but for this special period it marks the epicentre of a unique sport for competitors and spectators alike.

Kat Jungnickel is a sociologist, cyclist and maker. She is the 2013 national women’s penny-farthing champion and just a really, really cool lady.

What’s the most ridiculous ride you have ever done? Let us know in the comments below or on our Facebook page. 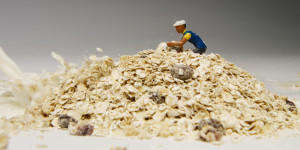 Porridge oats are the perfect pre-ride energy food. If you don’t believe us, just as...