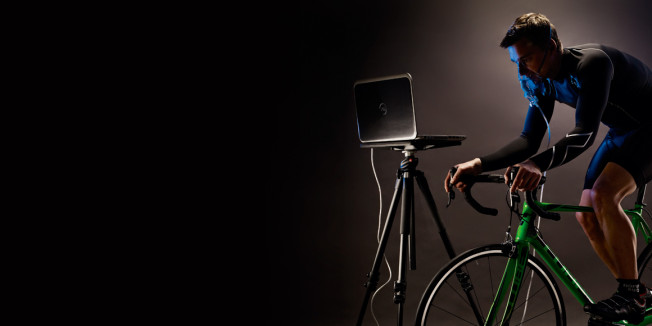 Most riders want to be fitter, but what does that really mean? Cyclist investigates the complex concept of physical fitness, and reveals how you can measure your for improved performance

How fit are you? Ask any cyclist that question and the answers will probably range from ‘Pretty damned fit, actually!’ to ‘Er…’ accompanied by nervous shuffling and attempts to suck in stomachs. Very few people, however, will be able to quantify accurately just how fit they are. It’s not an easy question to answer because, although fitness seems like a simple enough concept, it is strangely difficult to define, and even professionals in the fitness industry struggle to present a neat interpretation of what it means to be fit. We know this, because we asked them.

‘Fitness is a broad term that can mean different things to different people,’ says Mike Gleeson, professor of exercise biochemistry at Loughborough University. ‘Any definition of fitness depends on the nature and the endurance of the exercise. If it’s weights, it’s related to muscle mass and resistance. If it’s riding in a sportive, it’s about your cardio capacity and endurance.’

Ian Goodhew, senior coach with the Association of British Cycling Coaches, says, ‘I can’t think of anyone I talk to who uses the word fitness. We use form.’ Greg Whyte, professor of applied sport and exercise science at Liverpool John Moores University, adds, ‘It’s multifactorial. Performance relies on each component of fitness operating at their optimum level.’

By ‘each component’ Whyte is referring to 10 elements that sports scientists use to measure fitness. These are: endurance (the ability of the body systems to process, deliver, store and use energy over a sustained period); strength; flexibility; power; speed; coordination; agility; balance; body composition; and anaerobic capacity (your ability over short, intense efforts of less than two minutes). ‘The key is to identify the most important components for what you’re doing,’ Whyte adds.

And that depends on you. ‘What are we talking about?’ Whyte says. ‘Is it track cycling or road; long-distance or time-trial? There’s a contribution from each element, but the percentage depends on your discipline. Shorter distances require more strength and strength endurance to maintain power output and anaerobic capacity. Longer distances require more cardio endurance, but either way flexibility is vital for finding the optimum position on the bike to maintain power output and avoid injury.’

Body composition is also important. ‘That’s especially true for climbing,’ says GP and cyclist Andrew Soppitt. ‘All else being equal, a rider weighing 60kg will go uphill faster than a 65kg rider with the same power output. This year I’ve trained well so feel fit, but also weigh 3-4kg less than last year, and my climbing has improved significantly. So clearly nutrition is vital, too. If you train without fuelling with carbs at least some of the time then you can teach the body to burn a higher percentage of fat and thus preserve precious glycogen [your energy supply]. Eating balanced healthy meals otherwise is sensible, to ensure an adequate but not excessive calorie intake and mineral/vitamin intake.’ 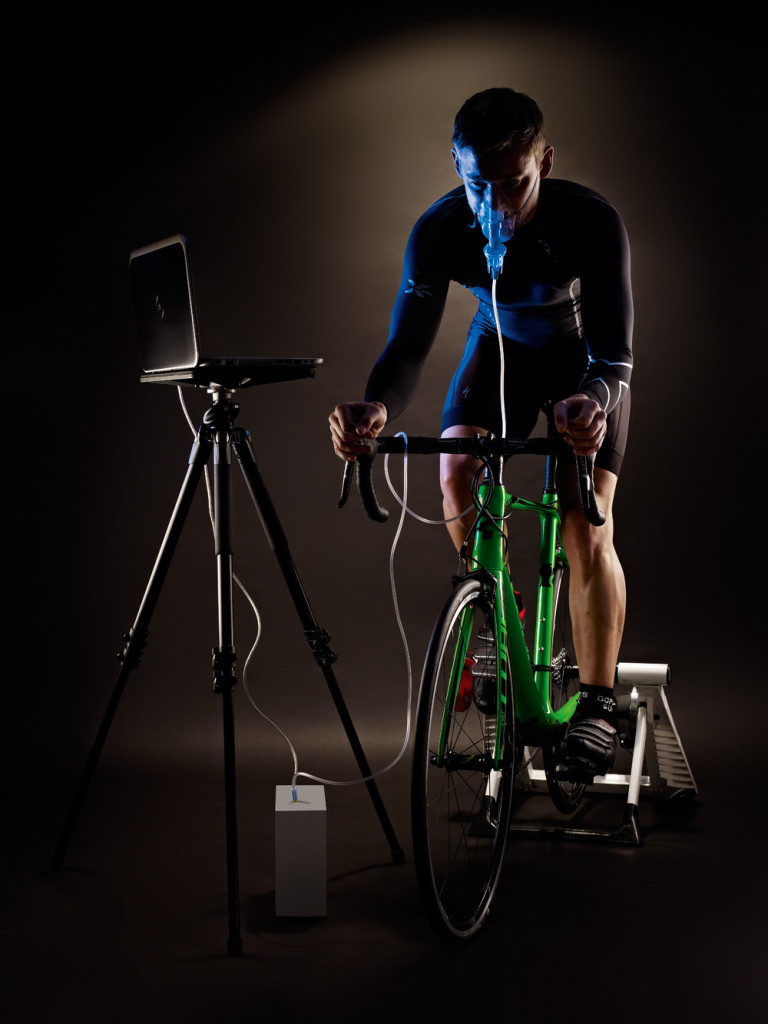 There are ways of testing various aspects of fitness that will give you hard data. The most popular for cyclists has traditionally been VO2 max, which measures your body’s ability to process oxygen during exercise. ‘The problem with VO2 max is that it has to be tested in lab conditions, which is expensive,’ says Goodhew.

Gleeson adds, ‘Other lab tests include blood lactate response, anaerobic capacity – closely related to the ability to sprint – which is peak power and average power during a 30-second all-out sprint test on a cycle ergometer, and economy, which is the oxygen cost of exercise at a fixed intensity, mostly related to biomechanics and the efficiency of movement. The cyclist would perform three periods of exercise at different fixed intensities – up to 40km time-trial pace – for five minutes each. VO2 and heart rate are measured and the oxygen cost for a given power is calculated.’

Slightly easier to measure is your heart rate (see below). ‘The best test of fitness is recovery,’ says Goodhew. ‘Take the Tour Of Britain – some riders made breaks and were then bollocksed for the rest of the Tour. Others did it again and again, because their recovery was better. So at the time you could say they were fitter.’

Soppitt agrees: ‘I know when I’m fit by seeing hard evidence of improved performance, and by the fact that longer rides come easier and recovery from hard efforts is quicker.’ And another key test used by all pro teams is the maximum power test, which is something you can do yourself to measure peak power, average power, time to peak power and end power (see box again). But power needs to be measured in the context of the rider: ‘Very soon the cost of power meters will come down, but we need to get away from talking solely about power and use the power-to-weight ratio,’ says Goodhew. ‘If you take a 60kg sprinter versus an 80kg rouleur, you just can’t compare the two [simply in terms of power].’

‘The big issue with maximum power is that it’s not necessarily an accurate predictor of real-life performance,’ says John Kelly, senior lecturer in exercise physiology at the University of Chichester. ‘Once you start dealing with hills, head winds or drafting, lab tests have little predictive capability. But they do give an objective indication of training status, and are sensitive to any change in response to training. This means they’re a useful tool to monitor training progression.’ Just remember one thing: ‘None of these tests ever won a bike race,’ says Goodhew.

What does it mean for you?

Once you’ve established how you want to define fitness and how it can be measured, the next task is to improve it. There are various ways of doing it but they all rely on one thing: a structured training plan.

‘Vary training using long rides, shorter, faster rides, hill climbing, incremental speed rides, interval sessions and occasional all-out sprints,’ says Gleeson. ‘This will maximise most aspects of fitness and it depends on your preferred event which one you concentrate on the most.’

Or, if you want to improve in one particular area of your fitness, you can use periodisation (for more on periodisation, see Cyclist issue 12). ‘Focus on a single aspect with the aim of improvement while the other aspects tick over,’ says Kelly. ‘Take power as a basic example. Let’s say you’ve identified it as a weakness and you are eager to improve. I would put in place a targeted training programme that focuses on developing power, maybe two sessions per week, with the rest of the time devoted to recovery and skills.’

‘Remember that recovery is important,’ Gleeson adds. ‘After a hard training session make sure that the one the next day is lighter.’

Who’s the fittest of them all?

It’s a classic pub debate among cyclists – who are the fittest pros? – and it’s an argument that our experts seem happy to get involved with. ‘Cross-country mountain bikers have the highest power-to-weight ratio and the quickest recovery,’ says Goodhew. ‘That’s a fact. Their race is a series of intervals, there’s a big skill factor and concentration is vital when you’re tearing up a mountain road covered in gravel and rocks. And they have incredible mental strength. Do they just take it steady? No, they go for it, every time.’

And what about in the pro road racing ranks? ‘You can throw a blanket over all the pro riders in terms of fitness,’ says Goodhew. ‘Take the Giro d’Italia, which Vincenzo Nibali won in atrocious weather. Was he fitter, or was he mentally stronger? He wanted it more than anyone else.’

Kelly, however, thinks psychology is not the separating factor. ‘All pro cyclists are mentally fit and tough,’ he says. ‘You only have to think of Johnny Hoogerland getting knocked off his bike and put through a barbed wire fence during the 2011 Tour de France to appreciate this. He was back on the bike the next day with 33 stitches.

‘Here’s an example from a book about survival at sea,’ he adds. ‘In the foreword the author suggests that the biggest factor is the will to survive. Who did they ask? The survivors, because the dead can’t talk. That means, then, that everyone who didn’t survive didn’t have a strong will, which is obviously rubbish. So yes, you have to be mentally tough, but if you haven’t got the legs on a particular day, psychology won’t get you up the hill any quicker.’

You are what you are

Getting back to the original question, perhaps it shouldn’t be ‘How fit are you?’ but ‘Are you fit for purpose?’ No two people have the same genetic make-up, the same lifestyle or the same goals. To be ‘fit’ means nothing without the context of the person and the purpose, so the next time someone accuses you of not being fit enough, simply reply, ‘For what?’ And suck in your stomach, if you see fit.

How do you measure up?

Three tests anyone can do to access fitness for cycling. No lab required

The five-time Tour de France winner rewrote the book in terms of cycling fitness – literally. ‘Everyone who read his book, Road Racing Technique And Training, in the 1980s said, “So that’s what you have to do,”’ says Ian Goodhew. ‘He had incredible mental strength as well as the constitution of an ox. He won by dominating physically and mentally. He’d go to the front, stick it in 11, ride for 20km and say, “Suck on that!”’

As memorable as his achievement of becoming the first Brit to win the Tour de France is, that alone doesn’t place him in the pantheon of all-time greats. But you have to look at the bigger picture. ‘It’s the breadth of his capacity that stands out,’ says Greg Whyte. ‘He’s won Olympic gold and World Championships over 4km in the individual and team pursuit, the Olympic Time-Trial and the greatest Grand Tour of them all. That proves his incredible fitness over different distances and disciplines.’

The greatest? The fittest? ‘With 11 Grand Tour wins, three World Championships and seven Milan-San Remos – plus a host of other achievements – Merckx was the outstanding cyclist of his time, and probably all time,’ says Andrew Soppitt. ‘Admittedly it was all quite a long time ago, but to win so many and keep winning – he was the fittest of his generation and arguably the most tough mentally. He has simply won more, and in more disciplines, than anyone else.’ 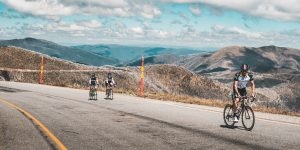 Peaks Challenge Falls Creek will push any cyclist to the very limits of their ability. Cyc...