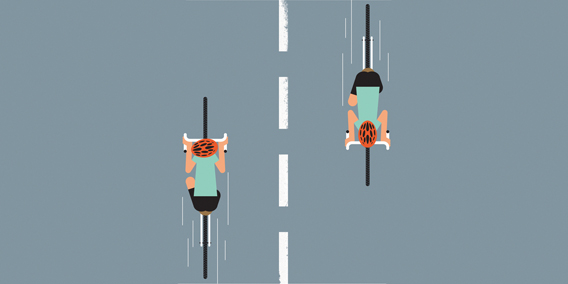 The Art of the Nod

Frank Strack, keeper of the The Rules at velominati.com, answers your burning questions

Like dogs, we have an inclination to pander to those more experienced and skilled than we are

What are your thoughts on the rule for acknowledging other cyclists going in the opposite direction? Stewart Paterson, by email

I’ve found that the more you think about things, the more complicated they get. This is one of the principle reasons why keeping thinking to an absolute minimum is the most effective strategy for dealing with tricky situations like this.

Thinking is the undoing of the Cyclist. Legs screaming, lungs bursting, vision tunnelling with every turn of the pedals; someone who specialises in ‘thinking’ would quickly ask, ‘Instead of keeping on with this, why not just slow down?’ Those people with their special thinking skills might be onto something, but I’m not about to work it out for them – I’m too busy drilling it hard.

The acknowledgement of another Cyclist on the road is a complicated web of social hierarchy issues, and rather than try to make sense of it (which sounds suspiciously like it might involve some introspection, and introspection never ends well), I distil this matter down to the only two groups whose social structure I can comprehend: dogs and construction workers.

I noticed long ago that when you bring together a group of dogs, the first item on the agenda is the sniffing of bungholes and the second is trying to coax one another into playing. The former is a matter of sizing one another up, the second of hierarchy.

Any given dog will only chase a dog higher on the Dog Ladder of Authority. This means only dogs of equivalent stature will chase each other and the others jerk about trying to get a rise out of dogs who stubbornly refuse to be drawn into such lowly things. I call this the ‘Dumbass pecking order’, as in, ‘I’m not playing with you, Dumbass.’

Construction workers, meanwhile, toil through long hours in dangerous conditions involving fatigue, manual labour, hangovers and heavy machinery. Construction workers, due to their difficult line of work, share a natural sense of solidarity. They are also not typically prone to open displays of emotion. Coming across one of their ilk, they are disinclined to let go of the lethal machinery they operate to take their companion warmly by the hand and bid them good fortune. Instead, they will grimace a little less, and signify camaraderie through a slight nod.

Cyclists share a similar solidarity to the construction worker, but we also carry with us a sense of canine hierarchy – we can distinguish between the Pedalwan and the Sensei, the enthusiast and the serious Cyclist. Like dogs, we have an inclination to pander to those more experienced and skilled than ourselves, and take a certain perverse delight in recognising those who are not as well travelled as we are.

As Cyclists, the acknowledgement of another rider is a revelation of our stature. We must be first sure to only acknowledge those who walk the same path as us; we no more recognise the pedestrian or motorist than we do the recumbent bicyclist. A rider of greater or equal commitment to ours will always be recognised without hesitation, especially in foul weather or on the slopes of a vicious climb.

A Cyclist must also recognise that eagerness is a flagrant waste of energy, therefore we must always be casually deliberate in our recognition: a nod, the lifting of a finger, two at most. The hand shall under no circumstances leave the bars, nor shall a smile replace the grimace that should be visible upon your face at all times. And if ever you’re in Belgium, forget about it. There are so many Cyclists that no one waves. The economy simply couldn’t support the number of repetitive stress injuries that would occur as a result. 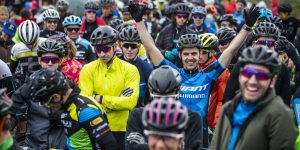 Defending champions Brendan Johnston and Samara Sheppard have kicked off their 2019 Cape t...