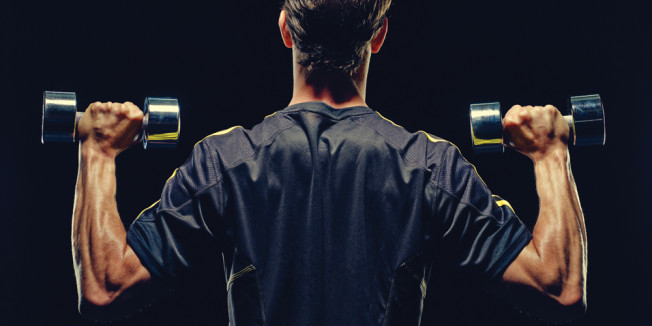 Even though many pros have the upper-body build of a 12-year-old boy, a bit of extra strength above the bib-shorts will actually make you a better rider

You may have godlike quads and chiseled calves, but if you finish a long ride with your neck, back and shoulders aching then you need to start looking at training what’s above your waist as much as what’s below it.

Traditionally, cyclists don’t give their upper body much thought – if you’ve ever bought an Italian-made jersey you’ll know what we’re talking about – but the bent-over position of the road racer puts unique stresses on the upper body while at the same time not strengthening it in any meaningful way. The same goes for your core; it’s essential for speed and power-transfer on the bike but you can only train it when you’re off the bike. Many cyclists are afraid that strengthening their upper halves will add unwanted weight to their bodies. Not so.

‘When you’re training off the bike, forget about the legs,’ says Ian Goodhew, coach for Team IG Sigma Sport. ‘If you’re riding enough they look after themselves. I try to encourage my riders to train the muscle groups they don’t use when riding, concentrating on their back, stomach, shoulders and arms.’

And you don’t need to invest in expensive barbells or gym memberships – a lot of the muscles you need to strengthen can be targeted using your own bodyweight.

‘The moment you start losing posture on the bike your power really drops off,’ says strength and conditioning coach Anthony Purcell. ‘Most people I see have a weak core and are very tight through their shoulders, lats [latissimus dorsi – the muscles at the sides of your back] and pectorals. Obviously this is a reflection of the bike riding position, but over time this can cause imbalances that can lead to pain after long periods on the bike. If you’re doing a really long sportive and at the end of it your shoulders are killing you, you should be looking at strengthening the areas that hurt.’

It’s not just enthusiastic amateurs who suffer, though. The bent over ‘prawn’ position of cycling affects those who do it for a living too. ‘Professional riders obviously spend a lot of time on the bike,’ says Martin Evans, EIS strength and conditioning coach. ‘But staying in such a thoracically and lumbar flexed position can lead to issues over time. It’s beneficial for their health generally to increase control in their arms and shoulders blades. It’s not really about strength as such, more about mobility.’

Training the upper body for cycling isn’t about building massive amounts of muscle either, rather you’re increasing strength to better withstand fatigue. After all, you don’t need to be built like Arnie to steer a bike.

‘Most of the pro road racers will be weak in their upper body,’ says Evans. ‘But we don’t want to give them muscle unnecessarily so we use functional bodyweight exercises that destabilise them and build coordination between the two halves of the body.’ Exercises such as press-ups and plank variations are not only good for maintaining an effective riding position and aiding bike control, they can also increase the amount of power you can generate.

‘When you push on a pedal it creates a diagonal force across to the opposite shoulder that ultimately goes through your hands,’ says Evans, ‘so it’s useful to train those patterns. One of the simplest moves is the press-up because the points of contact are the feet and the hands and you have to brace your abdominals in a plank position. You’re also strengthening your arms, wrists and chest.’

Being part of the chain that creates the power that goes through the pedals is not the only reason to strengthen those upper limbs. Having stronger arms and shoulders increases your ability to maintain an aggressive cycling position, essential when descending, and can help you to handle the metabolic stresses of riding for long periods. And of course they look good in a tight-fitting jersey too.

You may have the leg strength of a Cavendish or Cancellara, but without a strong core you won’t be able to use it.

‘Obviously your legs are the main sources of power, but if your core is weak they’re not going to work properly,’ says Purcell. ‘If you move about a lot when you’re riding then you’re going to waste a lot of energy. A solid core will help stabilise you, eliminating unnecessary upper-body movement so you’ll generate a good amount of power when you push down on the pedals.’

Again, you won’t increase your core strength from spending more time on the road. The cycling ‘tripod position’ of contact points – saddle, pedals and handlebars – may require a powerful torso but it doesn’t actually build one. If all this talk of core stability conjures up an image of a rippling washboard stomach, don’t worry, your six-pack – or rectus abdominis – is the least functional muscle when it comes to cycling. Rather you want to focus on your innermost abdominal muscle, the transverse abdominus, which will not only help with power but also ensure your lower back, obliques (side abs), glutes, hamstrings and hip flexors all work together as a unit. As with training your arms, it’s the humble press-up that is the must-do exercise – but it has to be done properly.

‘You see a of people doing press-ups badly, with a sag in their lower back,’ says Evans. ‘That means they’re not bracing their abdominals and just hanging off their lower back ligaments.’ Lower-back pain is another symptom of a weak core – if your hips, knees and thighs have nothing to push against then your back is quickly going to fatigue, causing pain and discomfort when riding and possibly other problems away from the bike.

‘There’s such a high incidence of back issues in cyclists,’ says Evans. ‘When you ride, all the force you create with your legs needs to be transferred up through your torso. If there’s a weak point then your effort will be less effective.’

So before you waste time banging out poorly executed press-ups, try perfecting the plank [see box on previous page]. ‘Isometric exercises like the plank – where force is applied without changing the length of the muscle – are great for abdominal strengthening because the main focus is stablising the body,’ says Purcell. ‘Once you can sustain the plank with correct form for a couple of minutes you’re ready to perform a decent press-up.’

Don’t waste time on ineffective sit-ups either, because you’ll only exacerbate any lower-back niggles. Use a Swiss ball, as it will support your back while destabilising your body, meaning your obliques – the muscles surrounding your torso – will get a workout too.

‘If you think of your torso as a cylinder, there are a lot muscles involved in supporting it,’ says Evans, ‘and all of them need to be up to a certain level of strength to stabilise it optimally. So hitting your middle from as many angles as possible is the best way to train it.’

Armed with this new knowledge, should you be forsaking a session on the bike for a trip to the gym?

‘For the pros, the amount of work they do off the bike varies throughout the year,’ says Evans. ‘Most of it tends to be concentrated early in the training year, typically with two sessions a week in the off-season. Then it gets less and less to the point when they don’t really have the time or energy to do it. Ideally we’d still get one session in a week throughout the year but it’s just not practical sometimes. By this point, though, the strength and stability they need will have been developed and hopefully they’ll hang on to it for the remainder of the season.’

And don’t think you need to be chucking huge weights around to see the benefits. ‘It’s very important that you’re “training” and not “lifting”,’ says Goodhew. ‘You want to be strong but not bulky. Keep free weights light and the reps high. Also use your bodyweight for exercises such as chin-ups and crunches – you don’t need the gym for those.’

And if you’re still worried about building an upper body like a wrestler then think on this: ‘We don’t modulate the sets and reps that much because, for the most part, the sheer amount of training that road cyclists do means they don’t tend to build that much muscle,’ says Evans. ‘The hypertrophy [muscle building] strength range is typically 8-10 reps for three sets so we’ll suggest something around that, but the volume of work they do on the bike is so high it’s actually a negative to gaining mass. The benefits of having the extra strength shows in the performance though.’

So if you want to be both faster and stay injury-free, give your lower half a break and get your upper body working. Your legs – and your performances – will thank you for it. 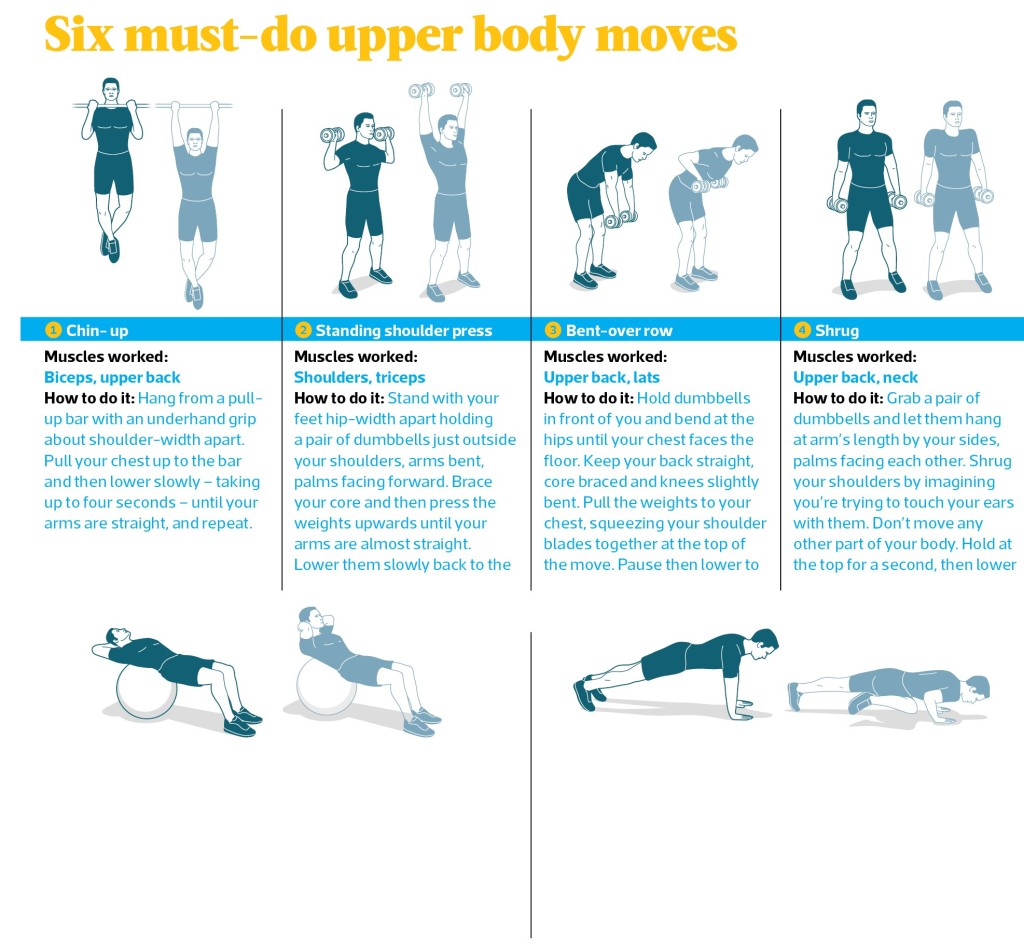 A wet and wild day at the Crocodile Trophy that once again saw the top riders Leandre Bouc...