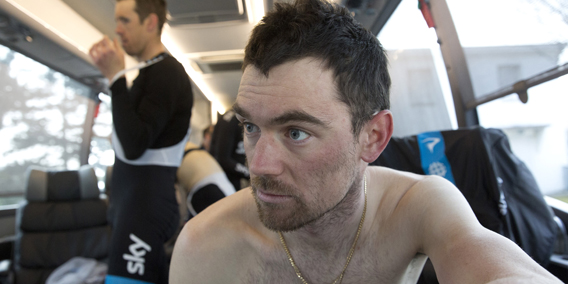 Well, this is my first blog for Cyclist and with all the excitement recently surrounding the Giro d’Italia, Tour of California and Tour of Norway, I wanted to share with you a bit about my last big race back in April, the Tour de Romandie – an iconic stage race in the French-speaking region of Switzerland.

The race originally began in 1947 to coincide with the 50-year anniversary of Swiss Cycling. Now in its 67th edition, I found myself in Romandie back on the road with Team Sky after just two weeks at home following the cobbled classics. Not much downtime and it was straight back into the fray.

Time trials are not really my cup of tea, but I was looking forward to getting things underway. I was the first rider off for Team Sky and I had my fellow countryman Richie Porte along with team GC Christopher Froome in the car for extra support.

I took off easily from the start as the road went straight uphill. I didn’t want to build up too much lactic acid in the legs straight away so the key for me was to start easy then go hard. I found a good rhythm and was away. I went as hard as I could but with 2km to go I hit a wall. Lactic acid flooded the pins and I struggled. I finished, but was pretty wiped.

It was a good way to blow out the cobwebs after two weeks of downtime. To be honest, I haven’t felt comfortable on a TT bike since 2009 and this race was no exception.

As ‘Froomie’ won the opening prologue, it was our duty to control the race. After we let a five-man break go up the road, the boys did a great job controlling it. I was given the chance to sprint on the day so I sat behind Froome and Porte. It was a pretty lumpy stage with a few good climbs. The last climb came about 40km from the finish and it was really tough as many riders were attacking. It was game on. I just managed to keep in contact over the top and was able to contest the sprint.

As we had a GC team here and with me being the only sprinter, I was left to fight alone. I was hoping for a top five result but I got boxed in and ran just outside the top 10. Although we rode on the front all day with no help from any other teams, we kept both Froome and Porte safe which was the important thing.

After my chance to sprint had come and gone, it was my turn to ride out front. Usually you don’t see sprinters on the front riding but it’s a team sport and I was more than happy to ride all day. In a sick and twisted way, I actually enjoyed it.

Sky had a game plan and that was to let four or five riders go. The race was hard and fast from the start. It looked like a break was going to go, but there were too many riders so we shut it down. After racing for roughly 50 minutes, the right group went for it and that was that. We let the break go out.

I was on the front with my teammate Pete Kennaugh. Once again, no team rode with us and we just controlled the race.

After riding on the front all day, I was starting to get a little nervous with other riders coming up near the front with 50km to go, but Kennaugh and I just kept riding along. With 30km to go the pace was getting faster. I went as hard as I could to line it out for the boys, and at 28km to go my job was done. I was cooked, but Froome remained in the leader’s jersey.

After a hard day riding on the front, the start of Stage 4 was hard and fast. I lost contact over a climb at the start, but just kept riding and caught back on through the support cars. My legs didn’t want to move but after about an hour I was back on the front suffering for a while.

I sat behind Froome and Porte, and retrieved some bidons for the team. Sitting on the boys sounds easy, but it’s not. Other riders always try to push you off the wheel. Even though you are sitting on your team it’s still stressful.

Overall, I just didn’t have the legs and I ended up in a big group that rode to the finish.

The Queen Stage, and not one bit of flat road. It was raining at the start, but no one cared as we had the race lead and we wanted to ensure that Froome still had the leader’s jersey on his back at the end of the day. The stage was changed due to snow, but the change only shortened the race by 2km.

I was on the front again with Kennaugh. My job was to ride until the 70km mark.

I did the best job I could for the boys. When we got to the top I was suffering and fell to the back of the group on the descent.

Snow covered the side of the road, and the fog was so bad you could hardly see 20m in front of you. It was pretty dangerous. I lost contact with the group on the next climb and my day was finished. I did all I could for the team. No need to cross the line.

That hot shower on the bus felt great as I was frozen. Afterwards, I was joined by Kennaugh, along with our teammates Gabriel Rasch and Josh Edmondson who had all done their jobs and pulled up as well. It was now time for the GC boys to do their job. Froome was paced by Porte, Vasil Kiryienka and David Lopez before launching his attack on the final climb. He finished second, but put more time into his rivals.

The spirits were high at dinner. It was a shame I wasn’t riding the time trial on the last day, but that’s life. I did the best job I could possibly do for the team and to help the GC guys. Not as if I was going to help much in that time-trail anyway.

Although I did not start, Froome finished third in the time trial just 33.85 seconds behind stage winner Tony Martin (21:07:67) of Omega Pharma-Quickstep and 18 seconds behind Adriano Malori (Lampre-Merida), but overall won the 762km race by 54 seconds over nearest rival Simon Spilak (Katusha).

With the Tour de Romandie done and dusted, it was great to relax and celebrate with the team over Froome’s big win. Interestingly, the race’s previous two winners, [Cadel] Evans (BMC) and [Sir Bradley] Wiggins (Sky) have each gone on to win the Tour de France that same year.

Could that trend continue? I wouldn’t bet against it.

Australia’s Chris Sutton is one of Team Sky’s frontline sprint talents and a stage winner at the 2011 Vuelta Espana. Follow ‘CJ’ on Twitter @cjsutton2 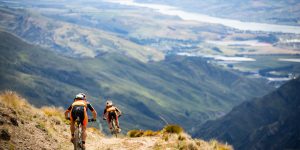 If there was ever a pre-Pioneer debate around which to classify as the Queen stage, it wou...