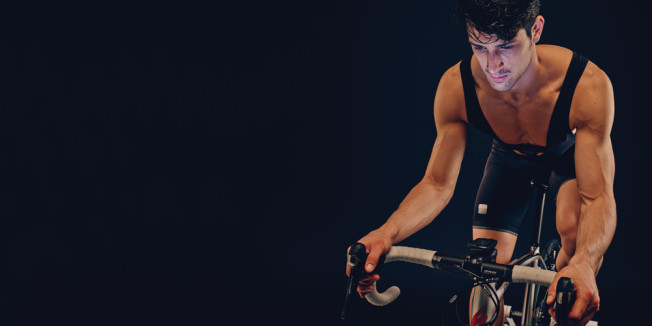 The talk in the peleton may be all about wattage, but the humble heart rate monitor can still revolutionise your training

These days reading about pro team training techniques conjures up mental images of white-coated scientists crunching numbers as reams of printer paper are spewed out across a lab, all to shave a few seconds off a TT time. Even for those without such a vivid imagination, one would have to concede that power, not heart rate, is the metric du jour – the one most likely to help achieve those magical marginal gains. But underestimate the ability of the humble heart rate monitor (HRM) at your peril.

Their slight fall from favour in the face of watts may be more to do with the fact that training with an HRM takes patience, discipline and a lack of ego – not things cyclists are known for. ‘We’re far more aware of the limitations
of heart rate as a metric for training and performance these days,’ says Chris Easton, lecturer in clinical exercise physiology at the Institute for Clinical Exercise and Health Science, University of the West of Scotland. ‘But even so,
it still has some advantages over just looking at power simply because it’s a physiological measurement. That is to say it tells you how your body is actually performing, not just the results of that performance.

‘A good example of this is lactate threshold testing and VO2 max testing, data that’s essential if you want to train at a specific intensity,’ Easton adds. ‘In this way HRMs have a real advantage over simply measuring power alone. If you take power-only stats into a performance element you soon find that they can be seriously affected by outside conditions. For example, cycling in hot and humid conditions will affect work rate, forcing riders to work above their thresholds, use more glycogen and increase lactate, causing them potentially to bonk halfway through a race or training session. What an HRM provides is physiological feedback, and it gives regular updates as to whether you’re working at too high an intensity too early on in the race – something you don’t get from the numbers on a power meter.’ 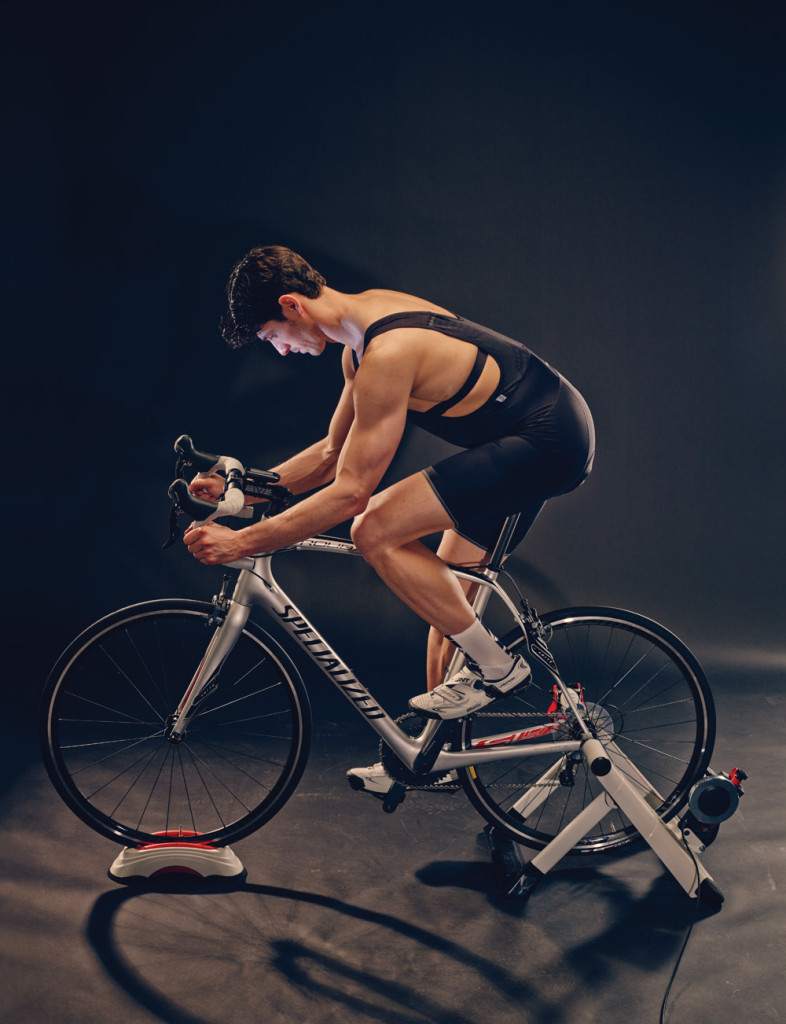 Every beat of your heart

Robby Ketchell, director of sport science for Team Garmin-Sharp, agrees with Easton. ‘Power should be thought of as feedback on how the body is performing, but heart rate is the performance itself – the primary force,’ he says. ‘So HRMs and power meters are two ends of the equation: what you’re putting in and what you’re getting out. They’re both really important as metrics for assessing performance.’ 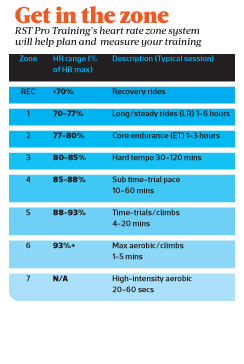 Even for the most enthusiastic amateurs, forking out for a power meter – a gadget that could cost them more than their actual bike – is out of the question. ‘Obviously heart rate on its own is limited,’ says Ketchell, ‘as any number of factors can affect it – genetics, the size of a person’s heart, a member of the opposite sex cycling past – but there’s a simplicity to training with heart rate. And the major advantage is you can pick one up for 30 quid so it offers amateurs a chance to quantify their training load and effectiveness. A really simple test is to cycle the same route at a set heart rate, say 150 beats per minute [bpm]. After a few weeks you’ll find your time will be faster.’

Whether you’ve bought an entry-level HRM or splashed out on a GPS-enabled touchscreen, there are a couple things you need to know before you head out on the bike. First of all, you need to find your resting and your maximum heart rate. Finding the first one is as easy as lying down. Upon waking, put on the chest strap and take a reading. Do this every morning for a week and work out your average. However, don’t start thinking that five consecutive Tour de France wins are within your grasp if you register on the lower end of the scale. ‘All resting heart rates are individual,’ says Ketchell. ‘OK, Miguel Indurain’s was ridiculous – I mean, 28bpm, that’s barely alive – but I’ve seen some really good pro riders with higher rates and some pretty average guys in the low
forties. It’s completely arbitrary.’

Finding your maximum is a bit trickier. There are various equations you can use to get a rough idea of what it is (220 minus your age, or 210 minus half your age, then minus 5% of your bodyweight in pounds, then if you’re a bloke add four) but these are limited, so be cautious how you use them. ‘You have to get your max right or else all your other levels will be wrong,’ says Ian Goodhew, coach for Team IG Sigma. ‘Calculations are bollocks – they don’t work at all. The only way to find your proper maximum heart rate is to do a controlled ramp test.’

These tests, carried out on a cycle ergometer, can be expensive, although Easton suggests a cheap alternative is to contact your local university’s exercise science lab and join one of their study groups. ‘The students will be absolutely desperate for cyclists to come in and get their full max tests done as part of their research work, and that data will be free. I’ve got a bunch of people I go
to whenever I’ve got a study running so their data is constantly updated, which really helps their training.’

Get in the zone

Once you’ve armed yourself with these two numbers you can work out your training zones. These are percentages of your maximum heart rate and will dictate your training effort dependent on your goals. There are many HR zone calculators available online, including the six-zone system prescribed by the Association of British Cycling Coaches, but for the purposes of this feature (and because it designed the training programme just below) we’ve gone with RST Pro Training’s seven-zone system (see box above). These include 77-80% for core endurance rides, 85-88% for sub-time-trial pace, right up to 93%+ for maximum aerobic or hill climbs. 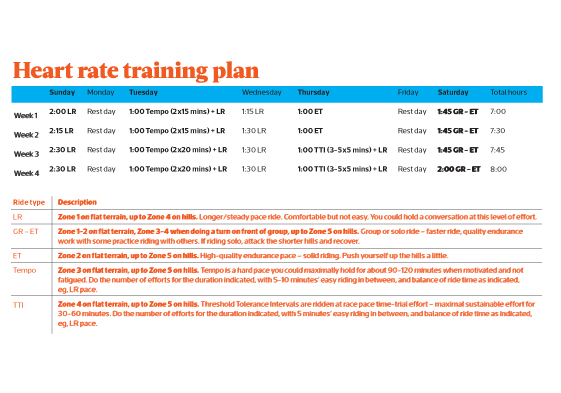 While training in some of these zones may seem counterintuitive, and in the case of long base training rides downright boring, it’s worth persevering. Try training for three hours in zone 2 (77-80%) and not only will it increase your aerobic base but you’ll also learn a humility you didn’t know you had as you
struggle to stay upright on hills and are overtaken by an old lady on a Pashley with a basket on her handlebars.

‘Having an HRM makes interval training a lot more effective as you can actually see that you’re going all-out rather than simply self-assessing,’ says Easton. Not only is the ability to work at these levels good for racing training, but it has also been proved to be the most effective way of shifting fat. Try alternating one minute at zone 6 with four minutes at zone 5 (just under your anabolic threshold). Repeat this five times and that’s a single effort. Slot one of these into every 90 minutes of riding and you’ll soon be able to buy an Italian-made jersey with confidence.

You can also target endurance with your HRM so you don’t flag at the end of a sportive or still have something left for the race home at the end of a club run. ‘Use it for simple things,’ says Ketchell. ‘Find out how long you can ride at a certain heart rate, look at how quickly you can recover from intervals, test the distance you can cover at a certain heart rate when doing climbs. These figures are important. The reason people like power meters is because they can have those numbers back immediately, but if you know how to interpret your heart rate it’s just as valuable.’

At the end of the day, whether you use an HRM or SRM, they just give you data. It’s good old-fashioned lactic acid that really tells you how you’re doing. ‘Don’t get too tied up in the numbers,’ says Easton. ‘There is a lot to be said for perception. Yes, it’s messy and difficult to quantify but the data your body is sending directly to you will decide if you win or not.’

‘An HRM is a tool, which is what some people forget,’ adds Goodhew. ‘It may help you analyse your fitness and health, but using that alone won’t make you a better rider. Just one who’s more aware of what’s going on in his body.’ 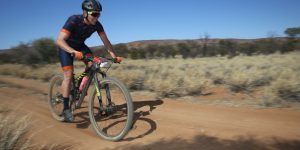 The Redback is done and dusted for another year. Our stage racing rookie Thomas Treloar en...