Dubbed the Coastal Stage, the second day 2019 Velothon Sunshine Coast is a crowd favourite. Featuring a speedy 100km route along the stunning David Low Way, the bunch would savour seaside views through Coolum, Peregian and Sunrise beach before heading inland and up the famous ‘Noosa Tri’ climb before a meandering a relatively flat route back to Cotton Tree.

Another day, another perfect start held under calm conditions and a Queensland sun chomping at the bit to warm things up. Following yesterday’s grind up the climb of Obi Obi, the bunch could have been excused from pushing too hard on the pedals today but this year’s been different. This year, it feels like everyone has put in the work through winter and arrived with a level of fitness beyond that of last year. Speeds are up, the main pack is huge and simply hanging on is a victory in itself. 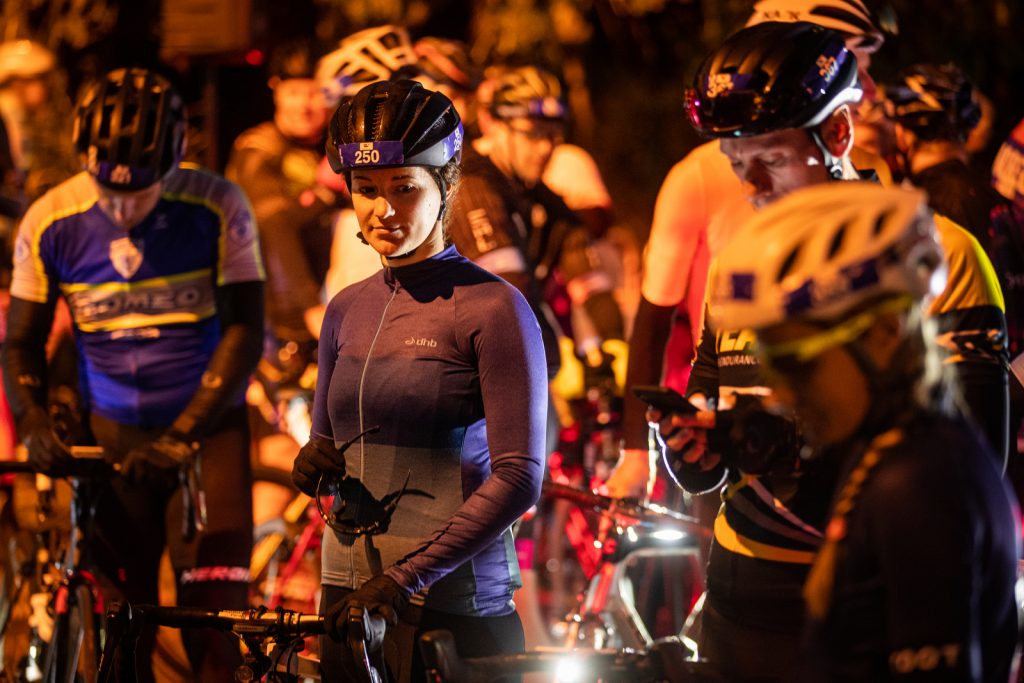 After a rapid start to Stage 2, it was again the powerhouse team of Spoken Cycles from Cambridge, New Zealand, that showed just how motivated they are to be in warmer conditions. Overnight Velothon leader Alex Heaney – a stage winner and yellow jersey wearer at last year’s Tour of Southland –  was again active and wasted little time in separating himself from the main bunch. Despite a concerted chase from the bunch along most of the coastline, the pace eventually settled leaving Alex and his stage-winning teammate James Harvey to consolidate and extend their leading margin in both the overall and team classification. 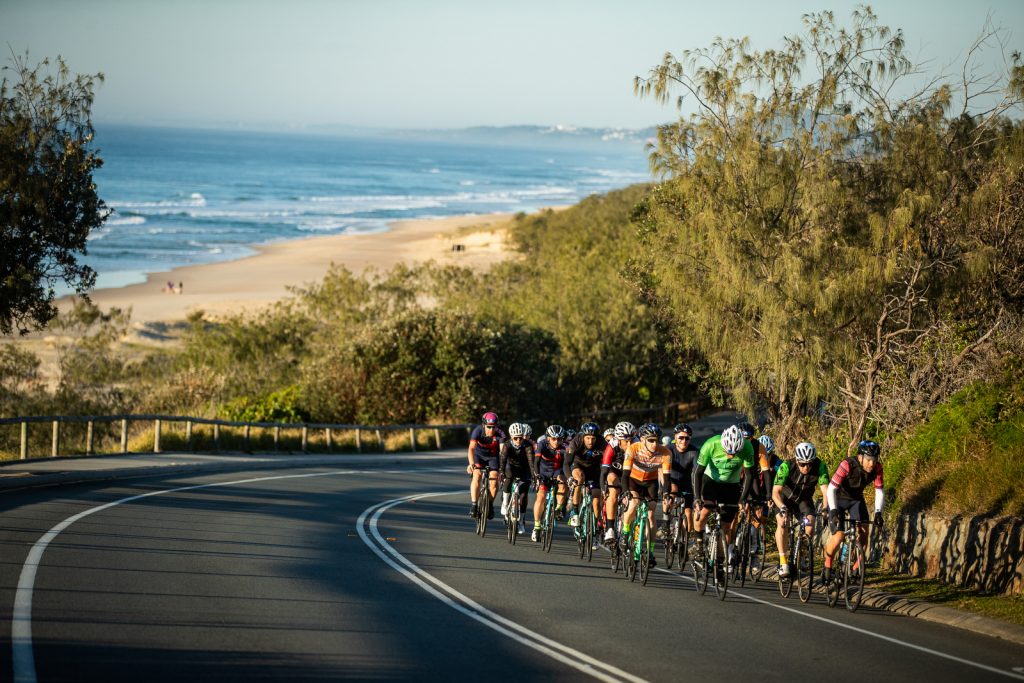 “A small group of us got away little bit after the sprint,” said James at the finish. “It was beautiful riding along the coast roads, really nice to ride and then Alex and I managed to get away from there. We saw the bunch behind us but just kept going. We didn’t know where they were eventually and it has turned out to be a very good result in the end.” 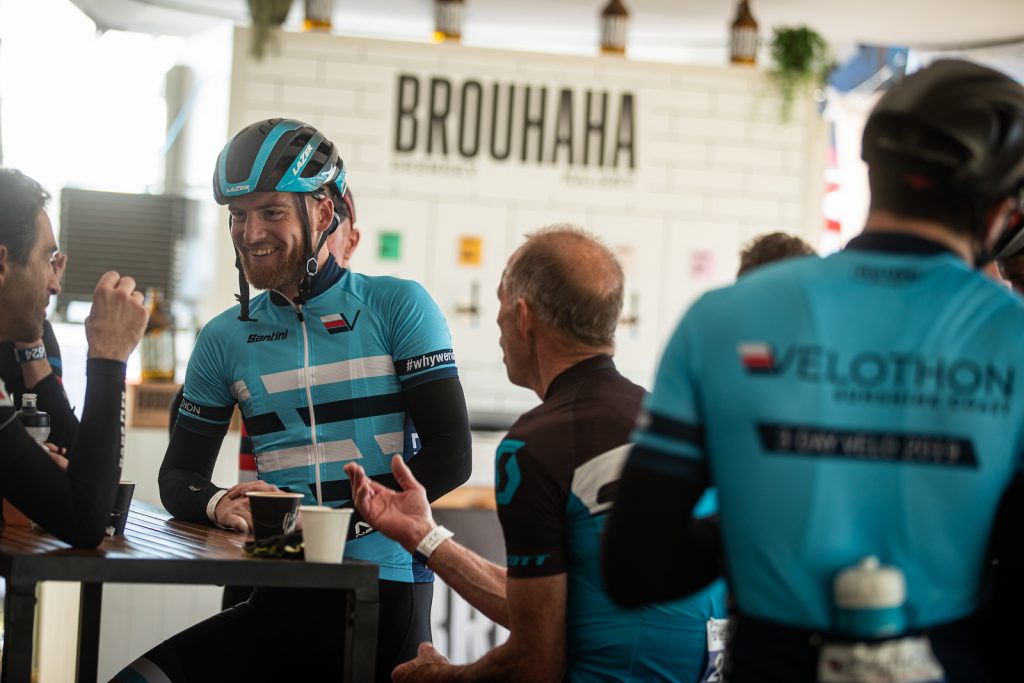 “We all train together, just like riding bikes and like going fast at times, we like riding hard and pushing ourselves, so it is good. Cambridge is a bit of a high performance hub. Cycling New Zealand is based out of the Avanti Drome so we are lucky enough to race on a weekly basis with some of New Zealand’s and the world’s best track and road riders, In terms of competition and racing we have got some pretty awesome opportunities and a really good training environment to be in.” 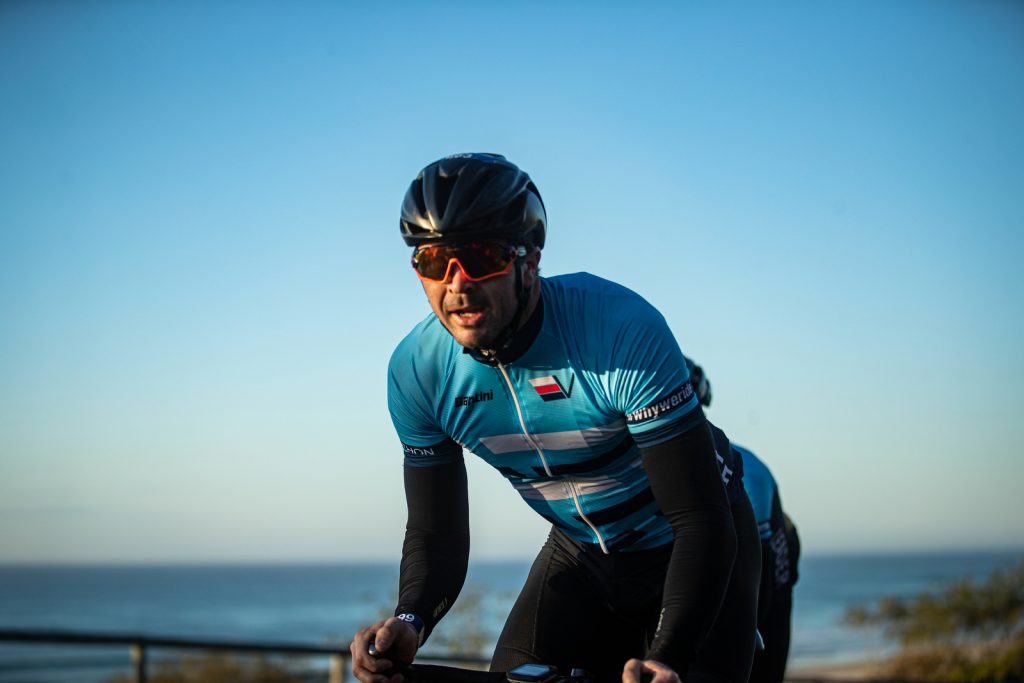 In the women’s category, Polka Dot jersey classification leader Megan Williams put her climbing legs on display with an impressive effort up Gyndier Driver, aka the Noosa Tri climb, that would see her arrive at the finish with the main bunch.

“Obi Obi was a bit of a surprise [yesterday],” said Megan. “It was challenging and at the steep points there were people walking but I realised I just had to get out of the saddle and force the bike up the hill. It was heaps of fun. When I got to the top it was a nice cruise on the way back. The first day I was a bit sluggish but the legs are fine now.  I am thinking tomorrow is going to be a tough day but the longer climbs suit me better than the short pinchy ones. I am hoping to go well and I am looking forward to it.” 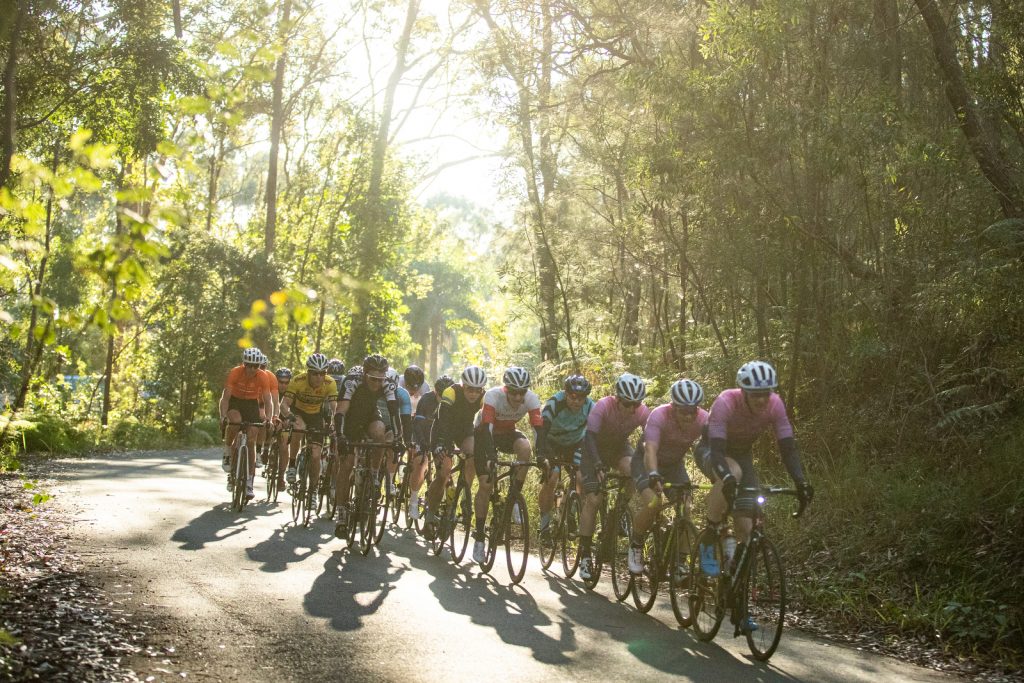 Williams, who balances her time between the mountain bike and on the road with the KOM Financial Advice Racing Team did enough to bring her to within a few seconds of second overall while yellow jersey wearer Zoë Clayton-Smith followed in a few minutes behind.

“I gave it a lot of gas on the climbs and then my legs couldn’t take the rollers so I got dropped. I tried to chase back on and I found two pals who helped me along and then very kindly my partner Alex realised I wasn’t in the front group and dropped back and brought me home. He was my knight in shining armour.” 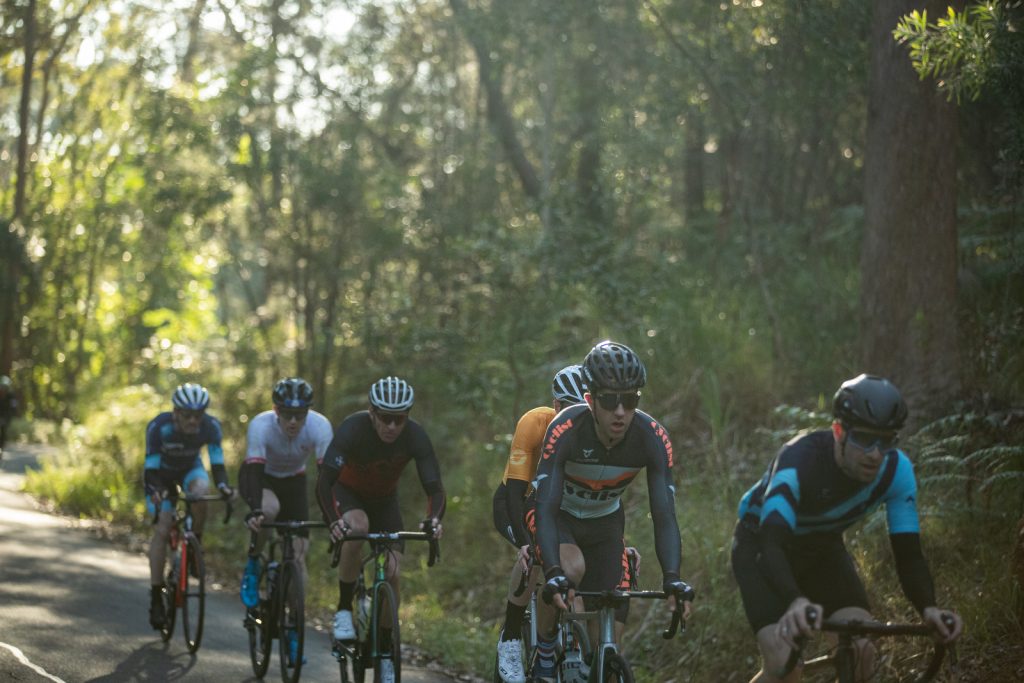 “Hopefully there hasn’t been too much damage on my times. It was still a great day, a hard ride but I loved it. The view on the coast with the sun coming up was so nice and then the beautiful hills. I think I was concentrating on the road a bit much today to truly enjoy the views but I will hit the beach later on to make up for it,” she said.

With two days of intense riding (or racing) in the legs, tomorrow’s Glasshouse Mountains stage will most certainly crown the best of Velothon for 2019. Featuring a relentless 137km profile and more than 2,500m of climbing, the final stage will push every rider to their limit – and beyond. 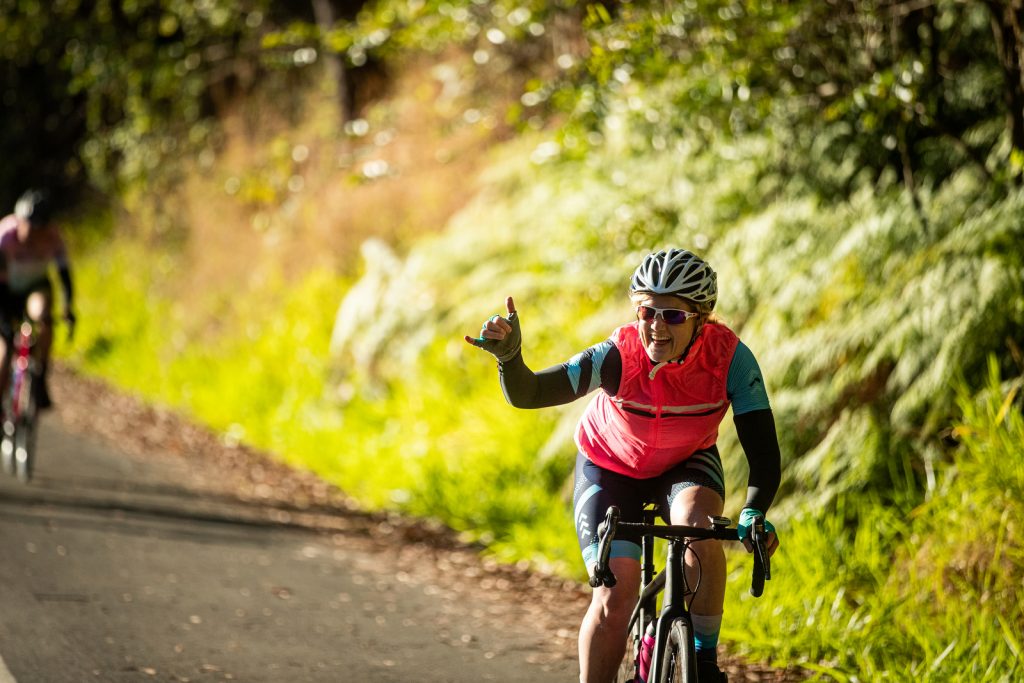 It can take a few days to really get in the groove of a multi-day event like Velothon but following yesterday’s session in the Normatec boots – with Brouhaha IPA recovery beverage in hand – the legs and mind were ready to roll, even with the slightly earlier start to Stage 2.

This particular stage is one that every rider loves. Things start of flat (and fast) before hitting the Sunshine Coast roads of David Low Way towards Noosa and the well-worn ascent from the Noosa Triathlon. Once over the top of Gyndier Drive, its another flat run home to the finish in Cotton Tree. And with this year featuring official stage starts and finishes outside of town, it’s taken the stress and danger out of trying to ‘race’ for a good time while negotiating the final kilometres of traffic. 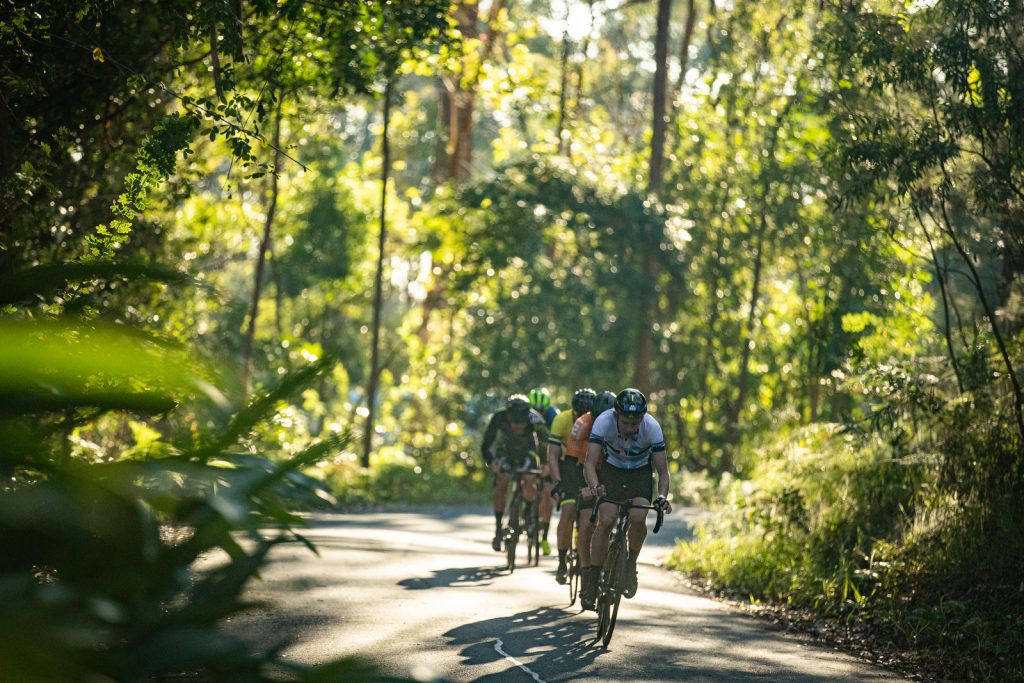 Having ridden parts of today’s stage during last year’s Velothon, there were few surprises along the way – apart from the shocking increase in speed compared to 2018. Last year I was busy getting the fitness up for the Mongolia Bike Challenge and came to the Sunshine Coast with strong legs and while this year hasn’t quite gone to plan, I’ve actually gone faster up most of the climbs. This sort of development in the bunch is wonderful to see and shows that riders and increasingly taking events like this seriously; putting down the hours and kilometres to ensure they arrive ready for a blast. 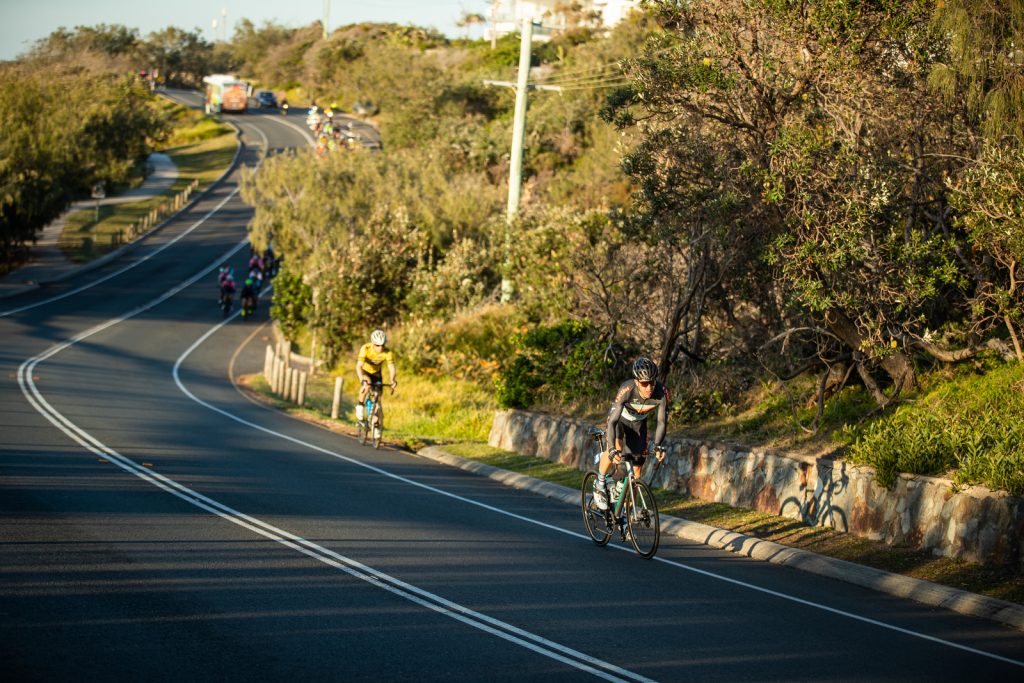 While Alex and his Kiwi teammates were dominating the early kilometres, I was committed to making the move. Unfortunately, I’m missing more than just a little bit this year and while getting into a number of small breakaways, none of them would be the right one, which considering our average speed up the coast, wasn’t that surprising. Today, we really shifted along! 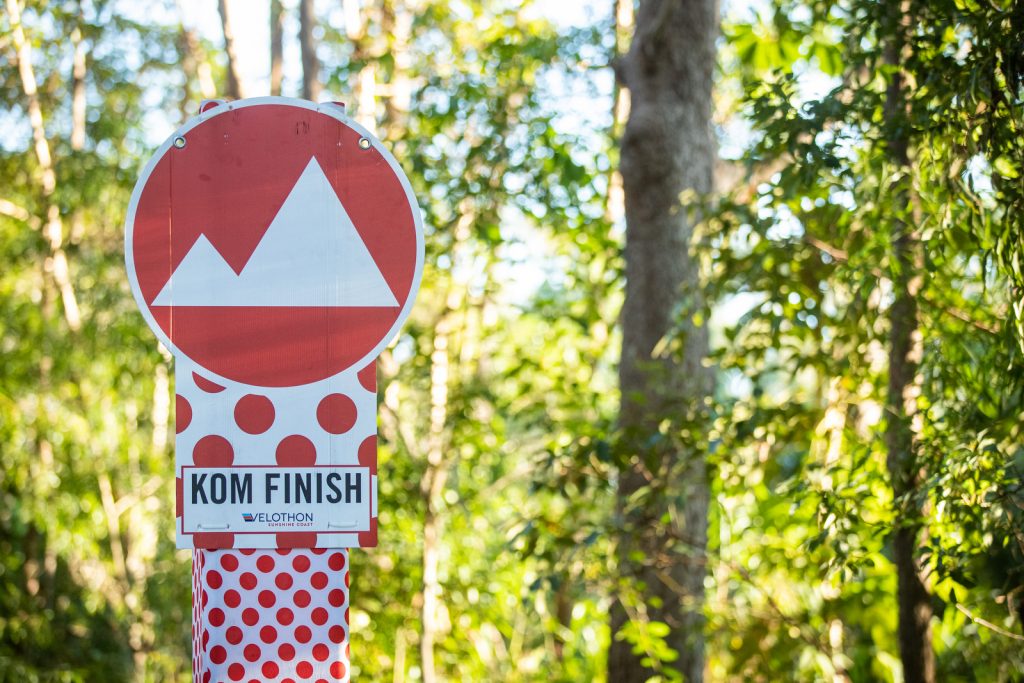 Gyndier Driver was the main test of the day and while only a short climb, it was pure stubbornness that got me over in the front group. Shortly after another large group tacked on for what would become a huge bunch until the end. It was at this time I made the tough decision, primarily from a sporting conscious point of view, to drop off the back and await the arrival of Zoë who had made the second group but unfortunately found herself poorly positioned over the top. With a three-rider group arriving a minute or two later, I went into our usual riding routine of setting a pace on the front touching threshold. 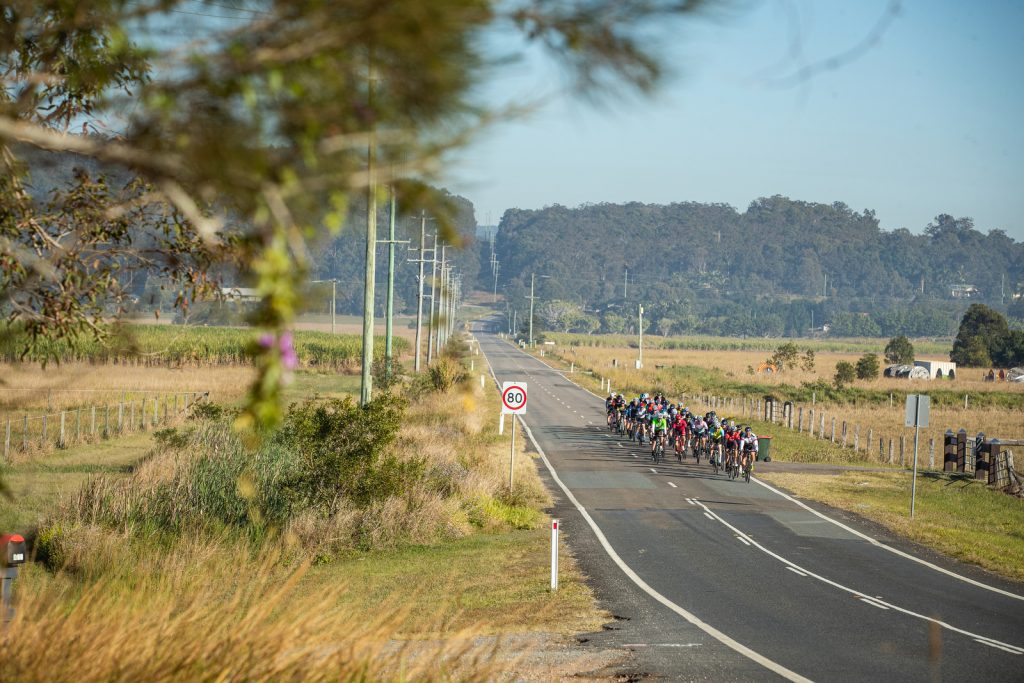 A huge high-five and apologies to Darryn and Mike who would probably would have loved to ride it in together with Zoë in tow. Alas, with around 15km to go they had performed their little-known roles like true legends leaving the two of us to ride it to the finish.

Tomorrow, we head towards the Glasshouse Mountains for the the third and final stage of this year’s Velothon Sunshine Coast. With a more or less equally-demanding route to last year’s Stage 1; featuring 137km and more than 2,500m of climbing.

Now it’s off to the recovery bar and boot station to ensure I’m ready to go for tomorrow’s biggie.

Get updates, results and news immediately via the Velothon Sunshine Coast App via iTunes or for Android. 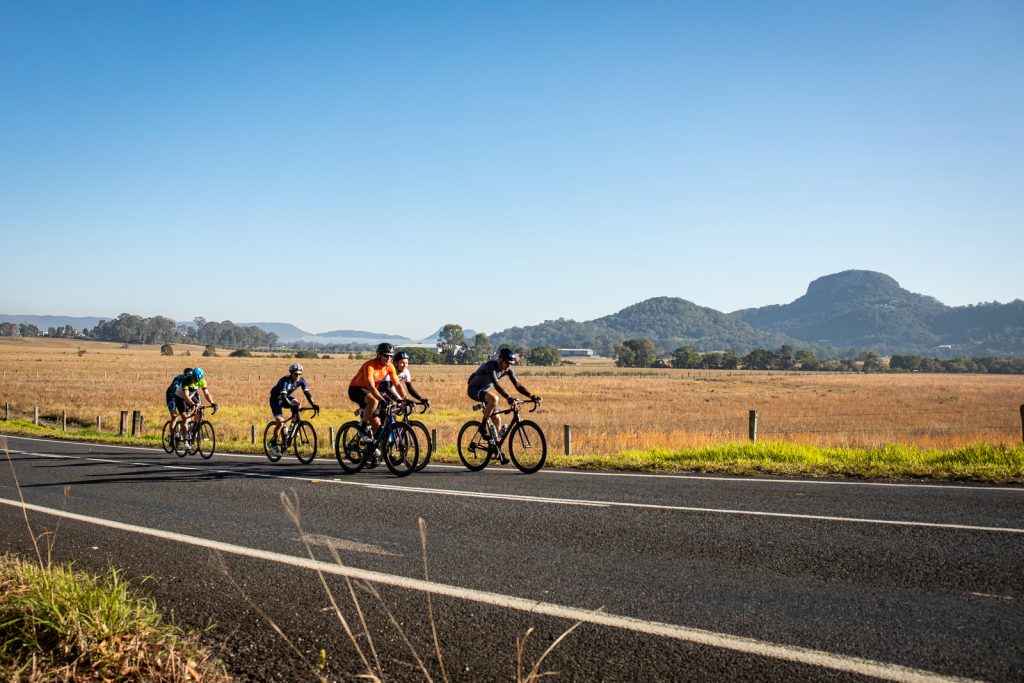 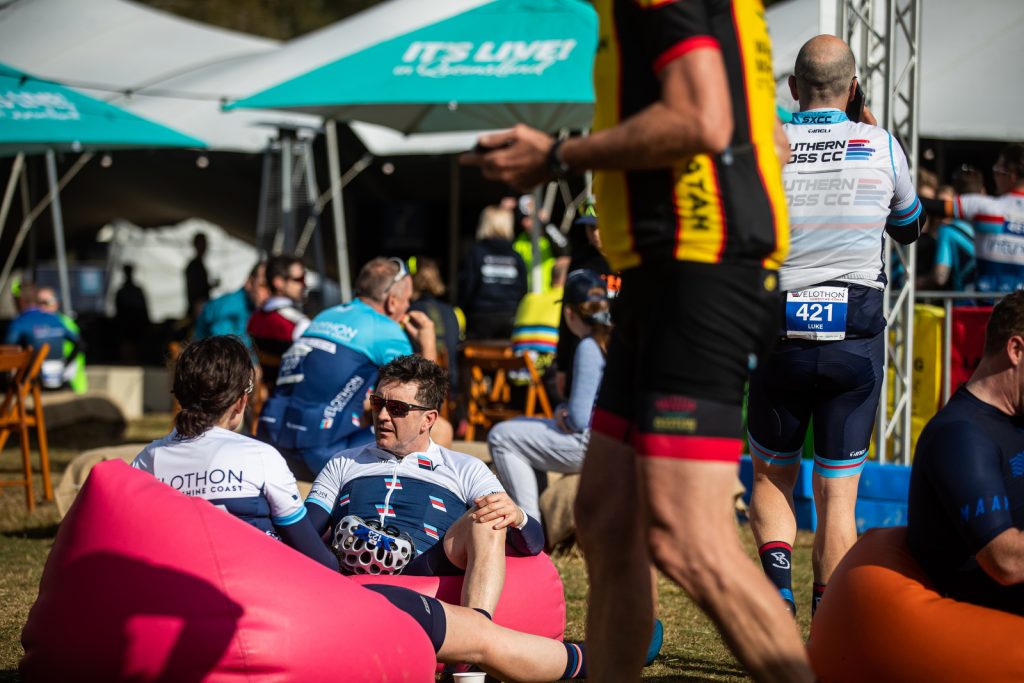 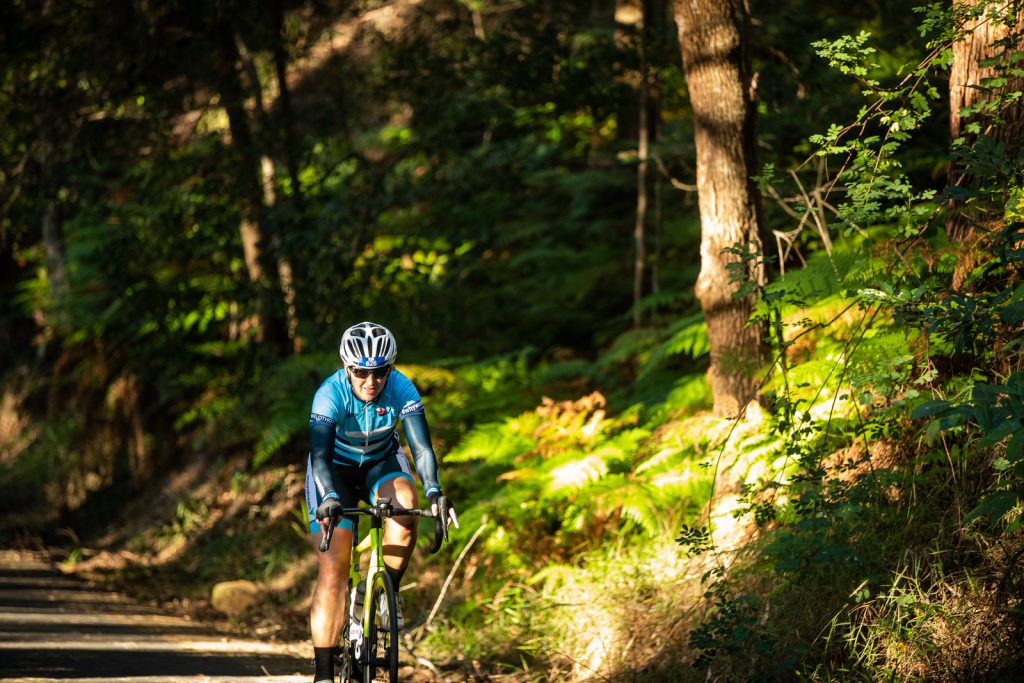 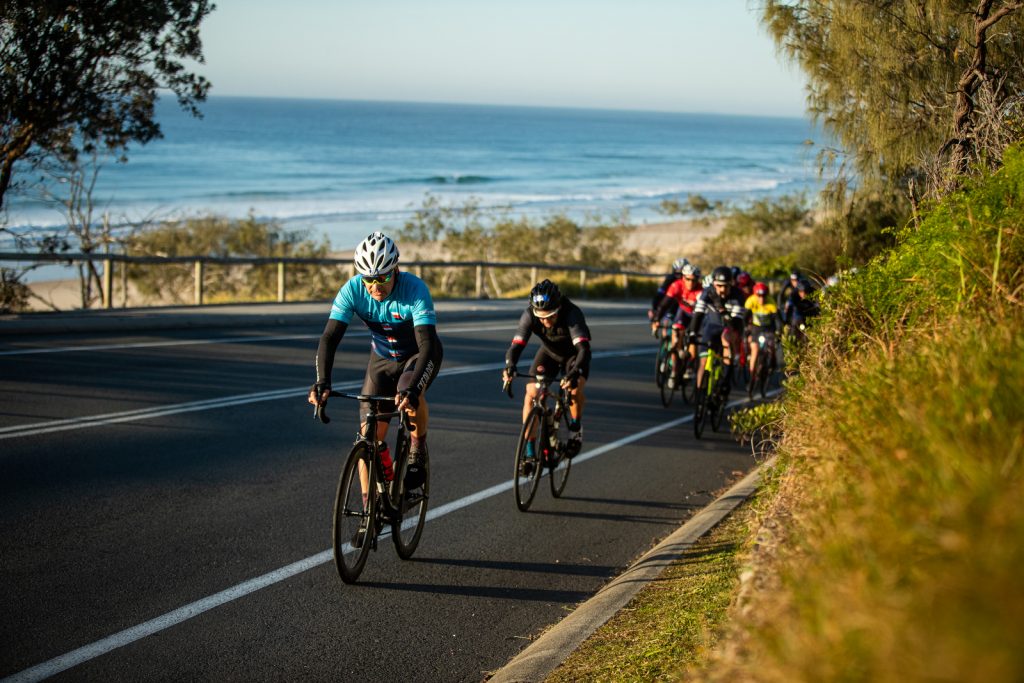 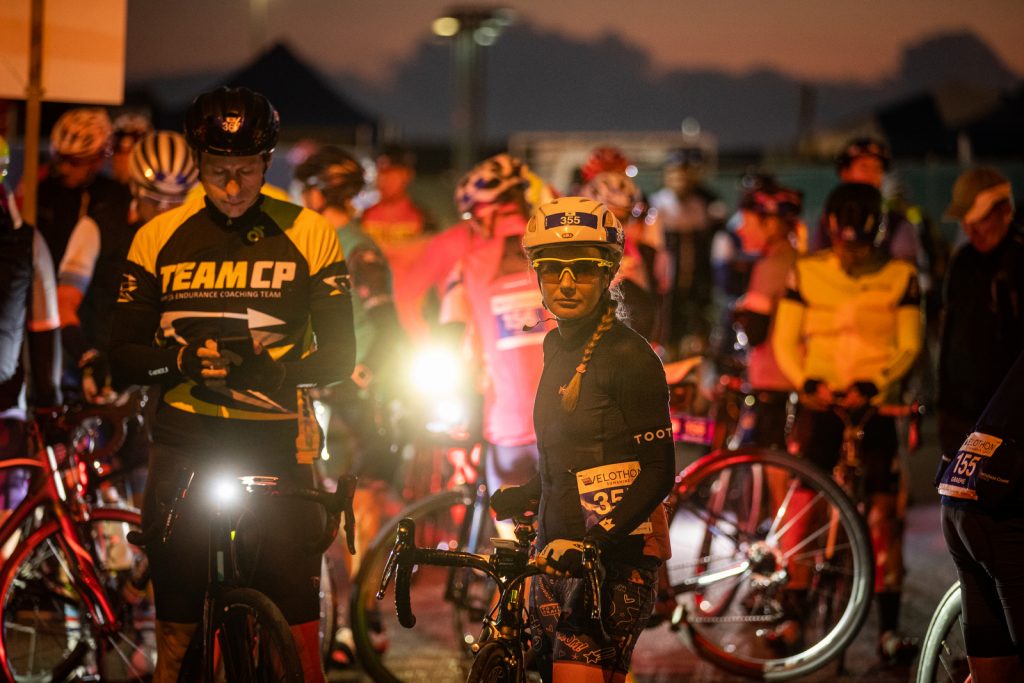 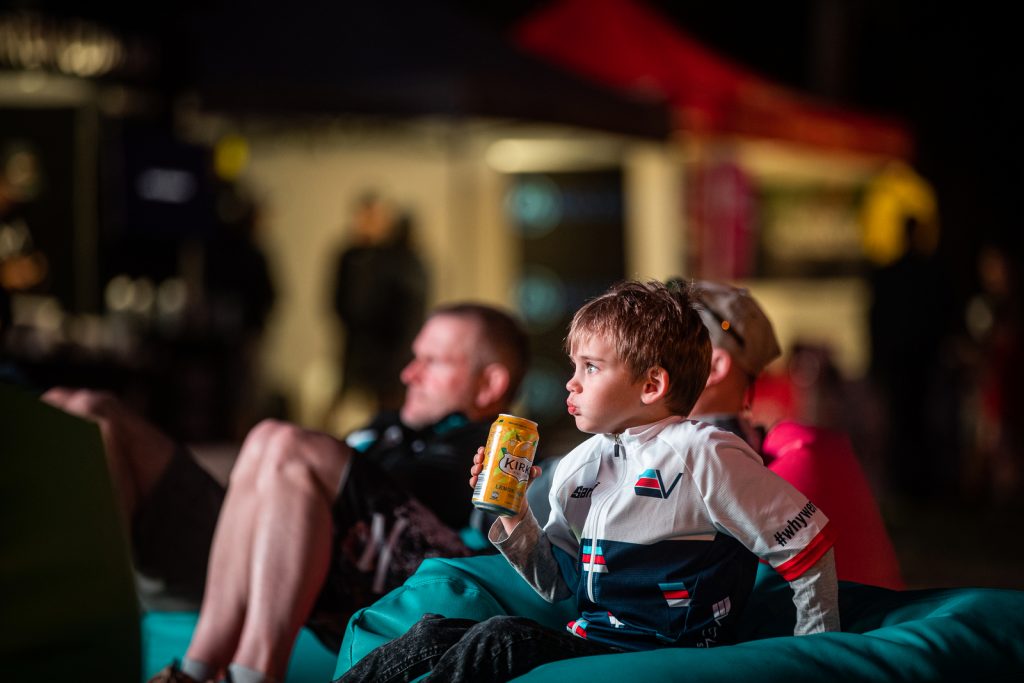 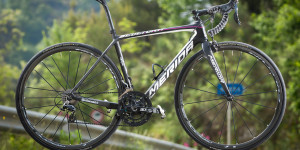 Prior to the start of the Giro d’Italia Merida launched an all-new Scultura. Reborn...