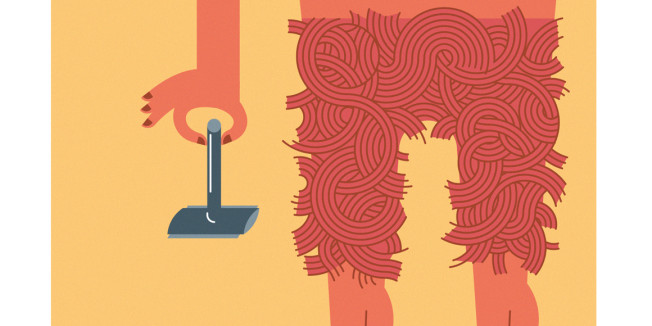 Eurosport blogger Blazin’ Saddles tackles a hairy issue
for any novice cyclist – to shave or not to shave?

‘You can come out on one condition,’ said Raymond from Cycle Gran Canaria. ‘You shave those bloody legs.’ On my last training trip with Ray, my fur trousers had made me look like a ‘tourist rider’. This time, ahead of tackling Gran Canaria’s toughest challenge – the fearsome Valley of the Tears – it was time to man up and adhere to Rule #33 of the Velominati.

Prior to the fateful day, the sharpest thing my legs had seen were a pair of snazzy Paul Smith jeans. Before introducing them to a razor, I clearly needed some advice. ‘You don’t shave already?! Disappointed. I thought you were one of us,’ harrumphed a follower on Twitter. If he didn’t unfollow there and then, he probably did so moments later when I posted a picture of the job in hand. ‘You’ll need a flame thrower and a strimmer for those,’ said another onlooker.

Given the fact that my body hair is not restricted to my lower legs (I was once nicknamed ‘Yeti’ at school) the next question was quite pertinent: how far should I go?

‘All the way to the hips,’ suggested a Twitter follower. Hmm. ‘Stop at the armpits but otherwise get rid of everything else,’ said another. Ah. ‘Crotch to socks. Wax. End of.’ Oh, please! I much preferred the suggestion to go ‘an inch beyond where the cycling shorts stop because any further is just kinky’.

Once I had subjected my bathroom to a lengthy procedure involving both beard trimmer and battery-powered Gillette Fusion Proglide, I faced the next unsightly obstacle – what fellow columnist Frank Strack refers to as ‘wookie shorts’. While I had no plans to don a pair of Speedos on the sand dunes of Maspalomas (this I would advise only to around 10% of the male population), the thought of sporting such fuzzy garments even underneath Lycra forced me into layering, tidying up and thinning out those thighs.

Sleeping that night was impossible. My new smooth legs felt constantly moist and alien against the sheets. The next morning I almost blinded myself with their pallor reflected in the bathroom mirror. Lucky that I was about to head out to sunnier climes – or should that be climbs?

Tanning a pair of legs that hadn’t seen unfiltered sunlight since I was a teenager was not too high on my priority list. I was in Gran Canaria on unfinished business: to bag the legendary VOTT – a 130km round trip boasting a total vertical gain of more than 3,000m. ‘Shaved legs won’t make the VOTT any easier,’ Ray said. ‘It’s dangerous, dark and evil – the most villainous piece of road-building contrived by man.’

Having suffered on its slopes for the best part of a day and somehow lived to tell the tale, I can say that I wholeheartedly agree. It made the Pico de las Nieves, Gran Canaria’s highest peak (which I wrote about in issue five) seem like a school field trip.

Thanks to the friendly folk at Free Motion at Playa del Ingles, I was riding a Cannondale CAAD10 compact with a 32-tooth big sprocket – ironically the exact same number of teeth I wanted to dislodge from Ray’s jaw with my fist midway through the toughest part of the parcours. Somehow I managed to get through the climbs, which peaked at 25% in places, and Ray congratulated me by stating, ‘You’re a man of the VOTT now. Nothing is beyond you.’ And he was right: the next day I completed a 100km solo ride up the mammoth ‘Serenity’ climb without any fuss.

Did shaved legs make any difference? Well, for most of the four days they were more stubbly than smooth. But I certainly felt less of a cycling charlatan – and that did wonders for my self-esteem. All this bodes well for my ride from Barcelona to Rome later this summer, where I’ll have to do 27 days on the trot. I just have to remember to pack the beard trimmer. 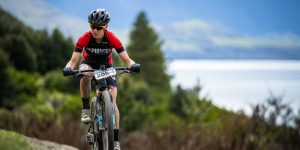 A day for the true lovers of dirt. A stage circling picturesque Queenstown that offered a ...