The third and ‘Queen’ stage of the 2019 Port to Port might have contributed a third of the race’s total altitude, but with a loop of the immaculately groomed Awaba single track and a fast downhill run into the finish in Cooranbong, there was plenty of reward for the battle against gravity.

Discussion the night before the stage was focussed on the 5km climb that would confront us 15km into the stage, rising 600m and marking a glorious, if painful, entry to the Watagans National Park. It was a relief then, when someone turned attention to the 7km of berms and bridges that comprise Awaba. The consensus view being “you’re going to love it…it’ll be like being served dessert before dinner”.

Singled out as the Queen stage – stage race shorthand for “it’ll be long and you’re going to be doing a lot of climbing” – the course map certainly backed that up. The 58km loop, the longest of the race, incorporated 1,250m of climbing according to the race book, ticking off both of the prerequisites for the royal moniker. Yet, stage races are the sum of their parts. Adding to the difficulty of the day would be the weight in the legs from Stage 1 and Stage 2, which swung a little more gingerly out of bed in the morning.

One of the truths that’s quickly revealed to you at a stage race is that in spite of how your legs may feel first thing in the morning, you’ll never quite know how they’ll respond until the racing starts. On the short dash to Awaba, it wasn’t entirely clear if Thomas and I had got our heart rate straps mixed up or not. With our bodies still warming up from the single digit temperatures, our heart rates gradually rose to our individually expected levels and it was game-on.

Awaba exceeded expectations. Looping up through groomed corners, over expertly placed bridges and through interchanging sectors of bush and rainforest was epic. After a few early errors picking lines I started to find some flow. Soon, the only surprise was the sudden change in light the spurts of rainforest would bring. Amid the sound of gears changing, a chorus of birds responded vocally the stampede of mountain bikers weaving through their habitat.

And just like that, it was done. A marshal signalled the start of the climb and we were on our way up. The climb suited us, and while greeting some of the riders we’d met throughout the first two stages, we locked in a rhythm we were comfortable with and pushed on up the hill. Half an hour after it started we crested the climb and commenced the rolling fire roads that skirt the Watagans ridgeline.

Today was the first day Thomas and I really found ourselves solo (without other teams around) on the course as our pace served to settle us somewhere between the larger groups of our fellow riders. It gave us a bit more tranquility and we were able to savour the vista of Lake Macquarie that would occasionally open up on our left hand side.

Having run out of ridgeline, reward came in the form of a gradual descent from the top of the hill and down to the finish. Chatter after the stage was all about this section of the course as freshly opened sections of single track delightfully breaking up the series of fire roads guiding us out and back into Cooranbong.

While we certainly weren’t troubling the timing crew unduly, we managed to cross the line about 15 minutes ahead of our pre-stage expectations. Even little wins like that are more than justification enough to grab a beer from the local brewery and swap a few war stories with fellow competitors.

After all, we were all battling for the same cause. Long live the Queen! 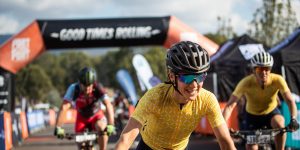 For Team Cyclist Australia/NZ, the opening stage of Port to Port was one punctuated by pun...