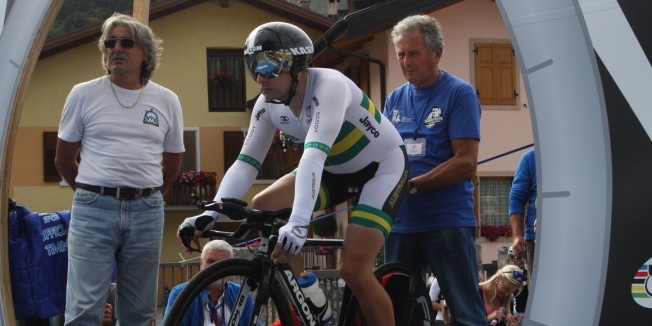 After a week of enjoying some much earned R&R in Italy, our MAMIL, Rick Jordan, is back on the bike to conquer his major goal for 2013, the UCI World Cycling Tour Individual Time Trial.

Just four days until d-day, it was time to do a test run of the Time Trial course. Another of the Sydney riders, Connor Hughes – himself an accomplished rider having finished 12th in his age group in the 2012 UCI World Masters Finals in South Africa – came along for the ride, even though he was only doing the road race.

After starting the course and completing the first 2km false-flat (the road looks like it’s flat, but in reality it is actually going slightly uphill), we came to the first descent, which lasted 3km. And boy was it fast. Speeds going down the hill were easily sitting above 65-70kph, and with a number of technical corners taking the correct lines were going to be crucial.

Passing the castle on the descent (yes, the descent looped around a castle), as well as some tight switchbacks, the course turned onto the lake and valley road where you could reasonably sit on 40kph. On race day, that will need to be above 50kph.

At the 18km mark, the road turned right at the Ponte Olivieti and the main climb started. It was 2.5km of grinding out the 39×28 up gradients of between 8 – 14%. The last 5km was back onto main road to finish.

The scenery throughout was stunning; shame on race-day I would only be seeing stars. I was smart to record the course on a tiny camera so that I could replay the video to pick out my lines, tricky corners and basically replay the course over and over until I knew it like the back of my hand. Unlike other Aussies who were there for the final and would ride the course multiple times over the week, I decided this would be a better strategy to save the “gunpowder”.

The evening before race-day, there was an official opening ceremony where all the athletes were able to march into the Piazza Del Duomo. Being able to walk into the Duomo on RAI TV behind the Australian flag and with 200 other Aussies was a once in a life time experience that I will never forget.

Race day was finally here. With the course being completely closed to traffic and not having a set of rollers to warm up, Supercoach recommended I do an early morning ride in Trento to get some blood in the legs. Temperature was in the mid 20’s and with a headwind for the first 2km and last 5km meant fast times would be on the menu. After reviewing the video, and my times from practise, I figured I could ride about 4 minutes faster on race-day.

Getting to Cavedine (the start and finish of the Time Trial), I was blown away by the athletes there to compete. Some of the Eastern European countries arrived in teams equipped with buses, looking more like a pro team than anything else. Talking to the riders, many had been riding full-time leading up to the race. And here I was, the MAMIL working a full-time job, squeezing in training, ready to race. Talk about MAMIL v Goliath.

After a too short warm-up, it was time to line up on the start ramp. I nervously waited until the time counted down and the race began. I probably went out a little too hard in the first 2km, putting myself in the red-zone too early. But, with the fast descent coming up there was time for recovery (and not to get distracted by scenery).

Switching the brain off, I let the breaks go down the descent, past the castle and onto the valley floor. After 6km, the Danish rider who started a minute behind me came motoring by and I followed as best I could, with speeds sitting in the mid to high 40kph range. I picked the lines right through the tricky corners and continued on towards the climb, with the Danish rider slowing disappearing up the road. The climb was hard. Very hard. Spectators on the side of the road were cheering riders on and I could hear them cheering on one of the Aussies (Paul Prottey) who started 30 seconds behind me.

I was caught at the top of the climb and then it was a drag race to the finish. The UCI time trial rules state you cannot draft off an opponent and you must sit 2m apart. So here were two Aussies, side by side racing each other to the finish. After putting in a bit of an effort I managed to pull in front and extended the gap.

Then the Russian came by. Like. A. Train. I couldn’t lift the speed enough to get any benefit, and continued onto the finish, crossing the finish line in 42:31. An average speed of 32.8 kph. I had hoped to ride around 43 minutes, so to pull in just under was quite an achievement.

Officially in my age group, I came 37th and was the 5th fastest Aussie. The quickest times for our age group were in the 35 minute range, so I was never going to be in contention. However all in all, a great day of racing and a great result for this MAMIL.

I may not have won a medal, or world champion jersey, but I achieved my goal for the year – that being to actual set the goal, work my butt off, represent my family and country and doing the best I could on the day.

But, it doesn’t end here. The upcoming road race was always going to be a race of survival. Next week I will allow you to sympathise with me as I underwent 112k of torture. 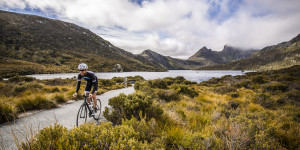 Are you ready to take on Cradle Mountain? We’ve reached the midway mark in the Peaks Cha...