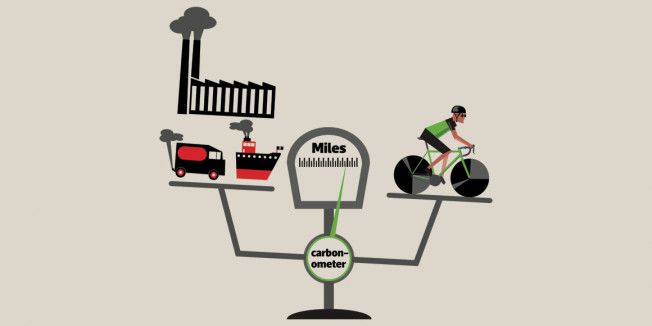 How green is my ride?

Manufacturing a bike produces emissions that damage the environment. You can offset it by cycling rather than driving – but how far do you have to go?

Cycling is one of the greenest ways to travel – bikes don’t have engines, use fuel or pollute the environment – but that doesn’t mean your carbon bike has no carbon footprint. Greenhouse gas emissions are pumped out by the factory that initially makes the carbon for your bike, and by the subsequent factories that manufacture the frame and its components. Then there’s the ship or plane that delivers your bike from the Far East (most probably) to your local bike shop, and so on.

However, the way we see it is that by riding a bike you’re not driving a car, so that’s a whole heap of greenhouse gases that you’re not contributing to the destruction of the planet, which leads us to our question… just how far do you have to ride (as opposed to driving a car) to offset the environmental damage of producing your bike in the first place?

First, the carbon. The good and possibly surprising news is that producing carbon doesn’t actually have a huge environmental impact, especially if it’s the right type. ‘There are two ways of producing carbon,’ says David Ward, product/training manager at Giant. ‘The first, called pitch carbon, comes from solid fuels such as coal, and has a greater footprint than the type we use, called PAN carbon. This is a by-product of the oil industry [PAN stands for polyacrylonitrile] – it basically comes from the sludge at the bottom of the ocean from oil refining. Extracting the carbon from that is the cleanest, greenest way of producing it.’

Manufacturing the frame itself isn’t too damaging either. ‘The carbon footprint is relatively low because there’s very little waste,’ says Ward. ‘Motors are used for laying up the strands and the swatches are cut by machine. The carbon spends two hours in the mould, and is only electrically heated for an hour. Everything else is done by hand.’

According to one source we spoke to who has worked with the material, making 1kg of carbon fibre produces 1kg of emissions. ‘A Giant carbon frame is 60% carbon fibre, 40% resin,’ says Ward, which means a 1kg frame contains 600g of carbon and produces about 600g of emissions. It doesn’t end there. ‘All the other components have to be manufactured,’ says Greg Whyte, professor of applied sport and exercise science at Liverpool John Moores University. ‘Then there’s the tyres, which also add to emissions. I’d imagine the footprint is pretty large.’ How large is difficult to determine, so we decided to make a few assumptions. The first being that the bike was manufactured in the cycling hotbed of Taiwan in a mass-production plant.

According the most recent statistics from a 2008 census, there were 1,105,102 factories in Taiwan. They were responsible for 258,599,000 tons of CO2 emissions in 2008, the most recently available estimate from the UN. That’s 234 tons of carbon dioxide emissions per factory.

According to Giant’s global group CEO, Antony Lo, the manufacturer assembles about one million bikes per year at its factory in Taichung, Taiwan. Divide 234 tons of CO2 by one million bikes and you get… actually a very reasonable 234g of CO2 per bike. We were surprised too, but that’s mass production for you. Add that to the carbon and it takes 834g
of CO2 to (mass) produce your bike.

Those of you with eagle eyes will have noticed we have only discussed CO2, rather than all greenhouses gases. Although figures for Taiwan aren’t available, research by the US government found that 81.5% of all industrial emissions were from CO2. If we add the extra 18.5% for other gases to our figure that gives
us a total carbon footprint of 1.023kg.

Once your bike has been assembled, it will have to be imported to the UK. Unfortunately emissions figures for individual cargo ships are non-existent, so here comes some maths. The journey from Taiwan’s port of Tamshui to Southampton by boat is 20,922km. According to research by the International Chamber Of Shipping, a cargo ship emits 1/26th of the pollutants a plane does for the same distance travelled. Averaging out every online emissions calculator we could find, a plane flying 20,922km emits 3,667kg of CO2. Divide that by 26 and a boat emits 141kg of CO2 getting your bike from Taiwan to Southampton (we’ll ignore the fact that the bike is just one of thousands of items on the boat).

Now let’s assume your bike shop is in London. The bike gets loaded at Southampton onto a Ford Transit with CO2 emissions of 189g/km (grams of carbon dioxide emitted per kilometre driven), so the 131km journey from Southampton to central London will emit 24.8kg of CO2 – incredibly, that’s way more than it took to make the bike. That gives us a total emissions figure for transport of 165.8kg of CO2.

If you add the transport figures to those of manufacture, the total emissions figure for getting your bike from scribbles on an order form to that shiny two-wheeled joy in the window of the shop is 166.823kg of CO2. That sounds a lot, but the final question remains: how far would you have to cycle, as opposed
to driving, to offset that figure?

According to The Green Guide To Car CO2 Emissions, the average figure in the UK across 8,792 new cars is 149g/km, which would get you a 1.2-litre VW Touran – exactly the kind of car that people who don’t cycle would consider an excellent purchase.

Quite simply, if we divide 166.823kg of CO2 by 149g/km, you will have to cycle for 1,119.6km to offset the carbon footprint of your Taiwanese-built carbon bike. If you commute to work 14km each way by bike (the average cycling commute distance in the UK), you will have hit your carbon offset target just eight weeks after purchasing your bike.

A betting man or woman would have pinpointed today’s stage around Skybury as the day...