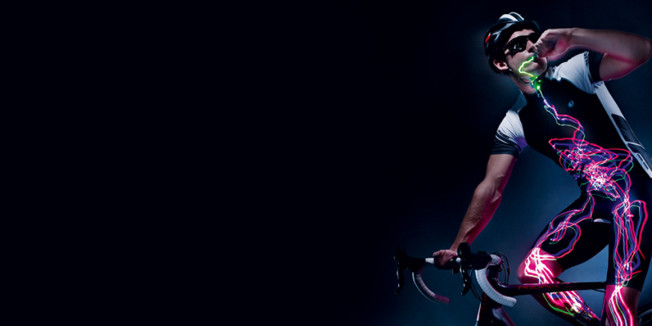 From gels to legs

You tear the sachet, swallow a blob of goo and suddenly you can feel your legs again. Cyclist investigates how energy gels actually work, how long they work for and whether they can really restore perfect form on the bike

It’s ironic that something so like jelly is designed to stop your legs from turning into just that when your energy levels drop. Yet wobbly legs are precisely what Chris Froome had when he found himself out of gas on Stage 18 of this year’s Tour de France – and it cost him.

With 4km to go on the second ascent of Alpe d’Huez, Froome’s blood sugar levels had dropped so low he could barely stay on the bike. Team-mate Richie Porte collected an energy gel for him from the team car and the Brit made it to the end of the stage, but incurred a 20-second time penalty because taking provisions from the team is banned in the final 20km of a stage. In the end, of course, it didn’t matter. Froome survived and won the Tour. But things could have panned out differently without that magic sachet.

So what precisely is an energy gel, besides being something that sticks to the wall if you throw it hard enough?

‘Fundamentally it’s carbohydrate in a small pack,’ says Greg Whyte, professor of applied sport and exercise science at Liverpool John Moores University. ‘There are 100-150 calories in a mouthful that rapidly increase energy availability, raise blood sugar levels and help stop muscle damage and fatigue.’ They contain a mix of carbs, with the most common ingredients being glucose and maltodextrin. ‘Many gels also have fructose, which is absorbed via different routes in the gut so don’t compete [with the other carbs], meaning you can absorb more,’ says Drew Price, a performance nutritionist who works with elite athletes. ‘Some will also have palatinose, a more complex carb that gives sustained energy. And others have brown rice syrup or apple juice – again basically just glucose, or glucose and fructose.’

Some things you won’t find in gels are fat, fibre and, in most cases, protein (see box on p76), because these all take longer for the stomach to absorb – not much use when your legs feel like an octopus’s and you need energy now. But gels do have additives as well as the carbs.

‘Most contain electrolytes, which replace salt in the blood [that’s lost during sweating],’ says Whyte. ‘They also make the gel more balanced to avoid gastric problems.’

Many also contain caffeine, a stimulant that can ward off fatigue and increase alertness. ‘It’s not usually enough to give you a caffeine boost on its own,’ says Ian Goodhew, an ABCC senior coach who works with IG-Sigma Sport. ‘But it does speed up the process of absorption.’

So far, so scientific. But the production process is far from technical. ‘The ingredients are basically thrown in a vat and mixed together,’ says Nigel Mitchell, head of nutrition at Team Sky. ‘It has to be hygienically clean, and the mixture is cooked so it’s sterile. Then the gunge goes into foil and is sealed so it has a long shelf life.’

The next question is how that blob of energy gets from the packet to your aching legs. Basically, sugars are broken down so they can pass into the bloodstream to supply energy to muscles around the body. But to understand the process further requires a quick biology lesson. ‘Amylase [an enzyme in saliva] gets to work breaking down the carbs,’ says Price. ‘The gel moves into the stomach and at that point amylase is deactivated by the acid before the gel moves quickly to the small intestine for absorption. Another enzyme – pancreatic amylase – finishes the job of breaking down the carbs.

‘Absorption happens by way of transporter proteins on the membranes of the gut cells,’ Price adds. ‘They actively grab amino acids, glucose molecules and sodium ions.’

From there the sugars [glucose] pass into the blood and through the liver. ‘If demand for energy from the body is high, they will pass out again and into the rest of the body, where they’re absorbed both by a system that uses insulin and one that doesn’t. Sugar passes directly into the body for use as energy if it’s required immediately. The rest is stored in the insulin system (insulin is produced in the pancreas and causes cells in the liver, skeletal muscles and fat tissue to absorb glucose from the blood) to prevent the body burning fat, rather than sugar, making this a longer-term store.

‘Both are similar to the carrier protein system that absorbed them in the gut,’ Price says. ‘The sugars and amino acids go into an end chemical pathway via different routes and they’re slowly chopped up. As this happens the bonds break and they give off energy to your cells.’

If that all sounds very long-winded you’ll be pleased to know that the process happens within minutes. Just how quickly you feel the benefit and how long the effect lasts depends both on your physiological make-up and the intensity of your effort, but you should feel the effects within five minutes. ‘You can’t be precise because everyone is different,’ says Mitchell. ‘But 20-30g of carbs will sustain a 70kg athlete at race pace for 20-30 minutes.’

Let’s go back to Froome, panting and shaking as he squeezes the gel into his mouth. Whyte feels this was a mistake. ‘He was penalised 20 seconds for no benefit. The gel would have lasted him until well after the end of the stage because he took it so late.’

Mitchell counters this because, before the gel has time to be absorbed, the body has a physiological response that starts to work even before you’ve swallowed it. ‘You start to feel the benefit as soon as you put a carb solution in your mouth,’ he says. ‘Your body anticipates the carbs and gears up for it. This has an immediate impact on performance.’

One vital thing to remember is that you shouldn’t rely on gels alone. Back on the subject of Froome, Whyte says, ‘I wouldn’t have taken a gel. I’d have taken “defizzed” Coke – it’s very high in glucose and caffeine.’

‘I went for a two-hour mountain bike ride earlier and just had a couple of bananas. I’ve got a big thing for bananas,’ says Mitchell. ‘If you’re in a chaingang on the rivet or doing a 50-mile time-trial, you’ll need more energy – and it can’t all come from gels.’ 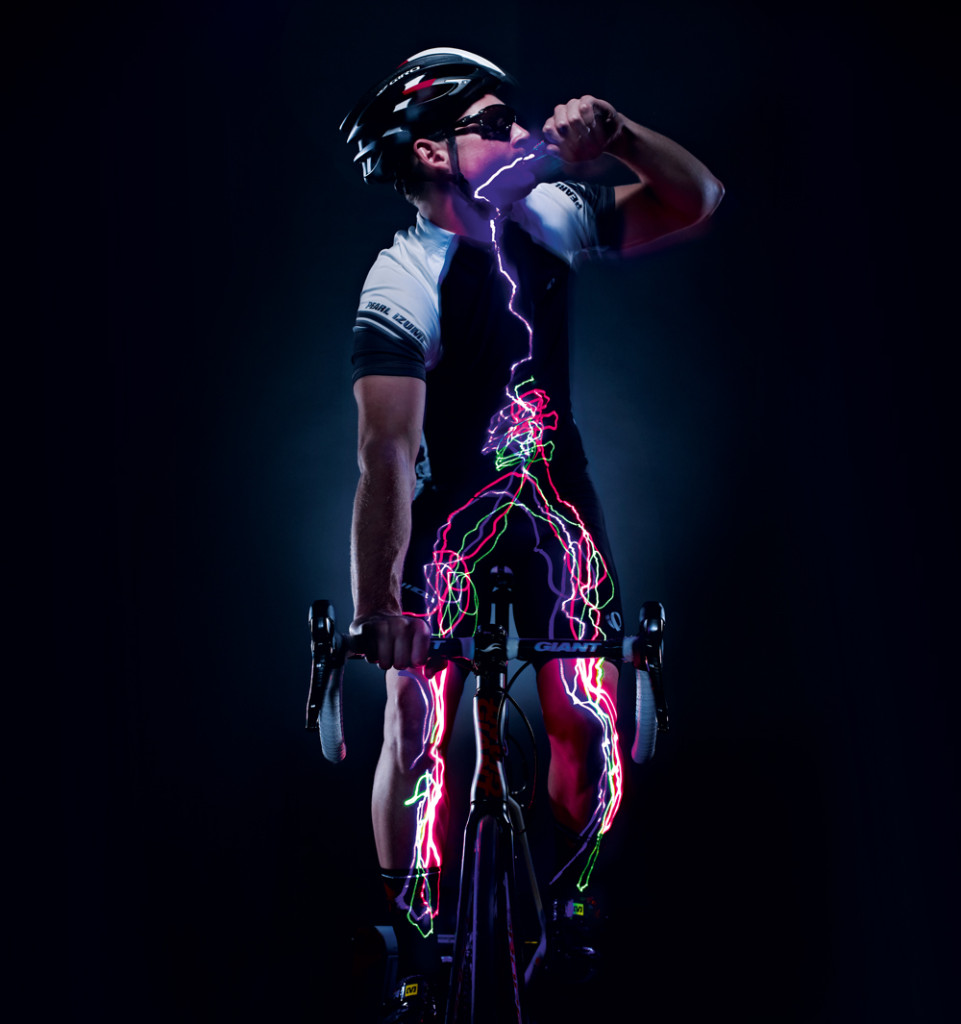 That’s because they can have a destabilising effect on your gastric system. This is tied in with the Glycaemic Index (GI), which measures how quickly food is absorbed by the body. ‘Long-chain sugars such as those in pasta and rice have a low GI, which means they provide sustained energy over a longer period,’ says Whyte. ‘The simple sugars in gels have a high GI and although they work, they can overload the stomach, which can cause gastric upset, cramps and diarrhoea.’

Although it’s absorbed quickly, sugar is actually hard for the body to absorb in the quantities found when you take multiple gels. The energy is useful but it can cause stomach problems. Plus, some people suffer from fructose intolerance, called fructose malabsorption, which can be linked to irritable bowel syndrome.

That being the case, you have to be careful when you take them. ‘If you’re necking gels in the changing room before a race you’re just spiking your insulin pool,’ says Goodhew. An insulin spike, caused by a large amount of simple carbs, actually reduces the absorption of protein and nutrients, which is not what you need before you’ve even set off. ‘I see more people than ever taking them when they’re warming up, but it’s only worth taking on carbs at this time if you’re going to go in an early break. You can take on slow-release energy and warm up on a roller, but you shouldn’t be having gels at that point.

‘So much of what cyclists consume is now in silver paper,’ Goodhew adds. ‘Instead, have a jam tart, cream cheese bagel or ham sandwich before a session or race. Even good energy bars get boring, and you need a “brick” in your stomach at the start of your ride to sustain you.’

That’s not an actual brick, but a store of fuel that should delay the need to take on gels. ‘You shouldn’t take anything if your ride is less than an hour,’ says Whyte. ‘If it’s longer there’s evidence that gels can enhance the quality of your ride, but there’s a limited rate at which your gut can absorb the carbs. Avoid overloading by taking little and often – it’s more likely to work and it reduces gastric upset.’

The next question is whether this burst of energy can actually improve your flagging form on the bike. Again, opinion is divided. ‘Gels are fuel in its simplest form but biomechanics is not a natural process,’ says Goodhew. ‘Man was not made to ride a bike. When you have aches and pains, the pain is rarely the problem. If your foot’s going dead, it’s not your foot – you’re probably pedalling with your hip, or one shoulder forward. Body maintenance is not a training issue.’

But Mitchell takes us back to Froome. ‘On the Alpe d’Huez his shoulders were slumped and he was struggling because his blood sugar had dropped. As soon as he’d had the gel his style picked up – even before the energy had hit his bloodstream.’

The future is here

Gels haven’t changed much over time, but a new idea being used by Team Sky promises to solve those gastric problems. ‘Bear in mind we work on “performance solutions”,’ says Mitchell. ‘At last year’s Tour Mark Cavendish complained that he could stomach only two or three gels on a stage, and even the guys in the mountains were saying the same. So we came up with a juice-based gel.

‘We mixed up maltodextrin and pineapple juice and put it in zip-tie bags. The riders tested it and it got made professionally, so it’s now on the market. They found they could take ten or more in a long race with no problems. You get carbs from the maltodextrin plus fructose, vitamins and electrolytes from the juice. It’s simpler and more natural.’

Just remember one thing: there’s no substitute for proper cycling nutrition. ‘Prevention is better than cure,’ says Mitchell. ‘You might want to train in a depleted state to increase adaptation, but you don’t want to race depleted. Our guys take on 60-90g of carbs per hour and practise in training with a mix of bottles, bars and gels.’

‘If you’re struggling in a race, you should have trained more or eaten sooner,’ Goodhew agrees. ‘We eat and drink much better on the bike than ever before, and there is no right or wrong – practise your nutrition, find out what works and do what’s right for you.

A wet and wild day at the Crocodile Trophy that once again saw the top riders Leandre Bouc...