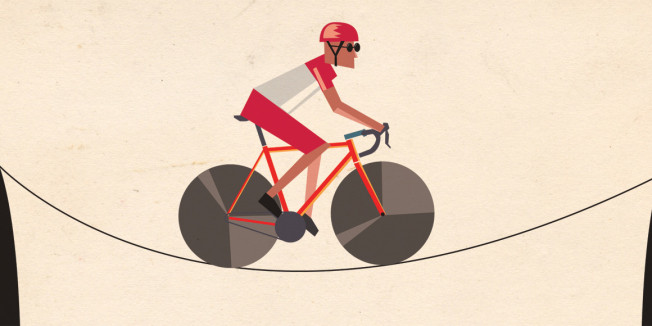 As yet, science is unable to explain why bikes don’t simply fall over as they roll along. But it’s getting closer…

Riding a bike. It’s just like riding a bike, right? Well, not if you are Cornell University professor Andy Ruina. He, along with co-authors Jim Papadopoulos, Arend Schwab, Jodi Kooijman and Jaap Meijaard, has written a paper entitled A Bicycle Can Be Self-Stable Without Gyroscopic or Castor Effects that suggests previously cited conditions for stability do not sufficiently explain – and are not even necessary for – the phenomenon of the self-stable bike.

‘It’s a remarkable thing that people can stay up on a bicycle at all. But one of the most amazing things about bicycles is that they can balance themselves,’ says Ruina. Giving the example of the famous scene in Jacques Tati’s 1949 film Jour de Fête, where bungling postman François chases his runaway steed as it winds riderless down a country road, Ruina and his fellow scientists set about exploring the conventional wisdom that two necessary conditions for a bicycle staying upright were either the gyroscopic torque of the wheels turning or
the castor trail of the front wheel.

‘You can only keep a bike upright when it’s moving,’ Ruina says. ‘What’s well known is that steering gives you balance. We can show this if we lock the steering on a riderless bike, push it along, then let it go. The bike will quickly fall over in the same way it falls over when it’s stationary.’ 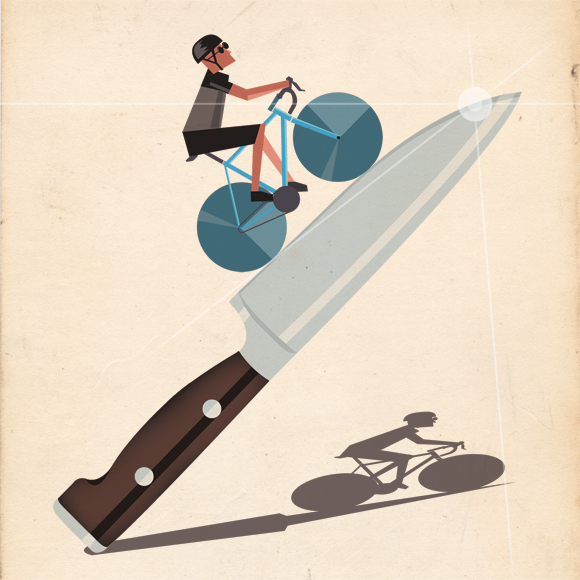 Ruina likens the effect to the balancing of a broom on one’s hand. As the vertical broom starts to lean left, the balancer moves their hand to the left also, bringing the bottom of the broom back underneath its falling top, thereby regaining balance. But taking the rider out of the equation, why does this happen with a bike?

‘People naturally think that if something spins fast it becomes rigid due to the gyroscopic effect, so when you turn it, it wants to turn the other way. That’s one common explanation. The other is that a bike behaves like a castor on a shopping trolley. People assume the actual ground contact point of the front wheel is in front of the steering axis because of the head angle and fork rake. But actually the wheel contacts the floor just behind this axis.’

The result is that, like a castor that can move 360° around a vertical axis (imagine your headset is the castor’s bearing and your hub is its axle), your front wheel ‘follows’ your handlebars. So like a shopping trolley, push your bike forward and the front wheel necessarily tucks in and trails behind the direction of travel. However, the researchers’ calculations showed that neither the gyroscopic or castor effect is actually responsible for a bike’s propensity to steer and self-stabilise.

To prove this, Ruina and his team constructed what they call the ‘Two Mass Skate’ (TMS). Looking something like a fold-up scooter, the TMS has the same properties as a bike – two wheels and a front and rear section of mass connected by a hinge (ie, the headset) – but it’s made in such a way that it’s not prone to gyroscopic or castor effects.

To achieve this, two small wheels contact the ground, each with a touching and hence contra-rotating wheel of equal mass on top, which cancels out any gyroscopic effect with opposing motion (the TMS’s wheels function more
like skates). And the contact point of the front wheel lies ahead of the steering axis, not behind as with a castor.

When pushed along and released, this castorless, trailless ‘bike’ stays upright, even correcting itself when knocked from the side. This therefore proves that something else, other than gyroscopic or castor effects, must be responsible for a bike’s tendency to self-stabilise by steering under itself. To explain this, the researchers posit that the distribution of mass, particularly on the steering assembly, is key.

Going back to the broom example, Ruina suggests, ‘The TMS has a mass that’s forward of the steering axis as well as a mass in the frame. When the front of
a bike falls, it falls faster, just as if you balance a pencil on your hand it will fall faster than a broom. So the front mass falls faster than the rear mass, but they’re connected to each other by the steering axis. Thus in an attempt to fall faster the front end causes steering and brings the bike back under itself.’

Ruina points out that this still doesn’t solve the question of a bicycle’s stability, not least as it concerns a rider-less bike. But what it does do is throw up fresh questions about how we stay upright on a bike, which might one day result
in fundamental design changes. As the researchers put it: ‘These results hint that the evolutionary process that has led to common present bicycle designs might not yet have explored potentially useful regions in design space.’ So there. 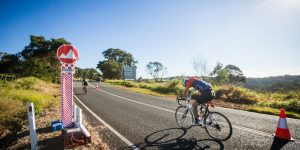 Last year we watched from the sidelines. Imagery and video from the inaugural Velothon Sun...