The cobbles of northern France are some of the most testing terrain on the pro circuit, and toughest of all are the brutal pavé sections of Paris-Roubaix. Cyclist discovers what it takes to tackle the Hell of the North

So far in my life, road cycling has not been a violent sport. No one has head butted me in a sprint finish or thrown a bidon in my face, and thankfully I haven’t crashed too often. Instead, like most riders, smoothness has been what I’ve sought, whether it’s with a fluid pedal stroke, a creamily well-executed shift or a perfectly rounded hairpin. Yes, I occasionally punish my legs and lungs on big hills, but for the majority of my time on the bike the world glides by without too much struggle. That’s exactly what it’s like now as we cruise though a small French village, sleepy on a Saturday afternoon. William, Alex and I cycle along chatting, with nothing more than the occasional manhole cover to warn each other about. There’s the hum of tyres on tarmac, the gentle zizzzzz of a free hub as we coast towards a junction, the mellow arc as we swing right down a side street… and then there they are, 100 yards ahead of us, uneven and unyielding. Some of them are wet and glistening, some of them are unseen, covered entirely by mud. We’re about to hit the cobbles. The chatting stops, we line out, crank up the pace, take a deep breath and try to stay relaxed as the first impact looms. The violence is about to begin.

We can’t recommend Pavé Cycling (www.cyclingpave.cc) highly enough. A weekend riding the cobbles with them, including Roubaix and Flanders, is around $888 (plus $75 to use a bike) and William and Alex will take care of everything.

Do it your own way

The smart move is to find a hotel in Lille such as the Novotel Lille Europe (www.novotel.com), which is close to the train station, then on the day of your ride take the train (with your bike) to St Amand les Eaux, approximately 30 minutes away. From there it’s a 12km ride to the village of Haveluy. Once you finish at the Roubaix Velodrome, it’s only a gentle 10km ride back to Lille.

Try the more traditional Paris-Roubaix Challenge sport.be/parisroubaix. Returning in April 2015 – the day before the professionals race Paris-Roubaix. Don’t say we didn’t warn you. Check out the full Challenge route here.

The full version of Henry Catchpole’s article can be read in future issues of cyclist. Keep up to date with the best roads in the world to cycle by subscribing at magshop.com.au/Cyclist or via iTunes https://itunes.apple.com/au/app/cyclist-australia/id602436026?mt=8. 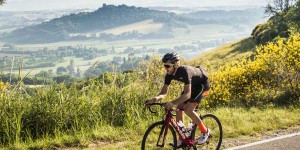 Cyclist ventures to Emilia-Romagna, Italy, and discovers that the spirit of Marco Pantani ...