Next March will see the return of the Orange Challenge. Situated in the rolling hills of New South Wales, Cyclist was one of the first to sample the course and we continue to return year after year. Here’s what to expect.

New South Welshmen (and women) had been crying out for a truly challenging sportive to call their own and it arguably arrived in March 2016. Situated three-and-a-half hours from Sydney or Canberra, the popular wine-making town of Orange will play host to the Newcrest Orange Challenge. Unlike its epic Peaks Challenge cousin, this one will leave you with just enough energy so you can enjoy an ale and steak from the renowned Hotel Canobolas – or even a meal at local hatted restaurant Lolli Redini. A demanding yet highly achievable route and the promise of sampling some of the country’s top drops? We couldn’t resist taking a better look.

We’re on a course due west from the town centre, steadily ticking along the rolling roads of the event formerly known as the Ronde van de Nob – a tribute to the cobbled Belgian spring classic, the Ronde van Vlaanderen (the Tour of Flanders). A brief look at the computer screen reveals we’ve already hit pro-level speeds far beyond anything we could experience in the city.

Orange’s European Monument counterpart may venture around the northern parts of Belgium, but this particular ride circles around Mount Canobolas, the nearby extinct volcano affectionately known as “the Nob”. And while we’re yet to truly understand the event’s former name, we’re told all will be revealed later in the day. After all, De Ronde does feature numerous sections of brutal cobblestones. It would seem that the Orange Challenge has plenty of history behind it. Did we mention Orange is also the birthplace of Banjo Paterson? You can’t get more true blue than that. 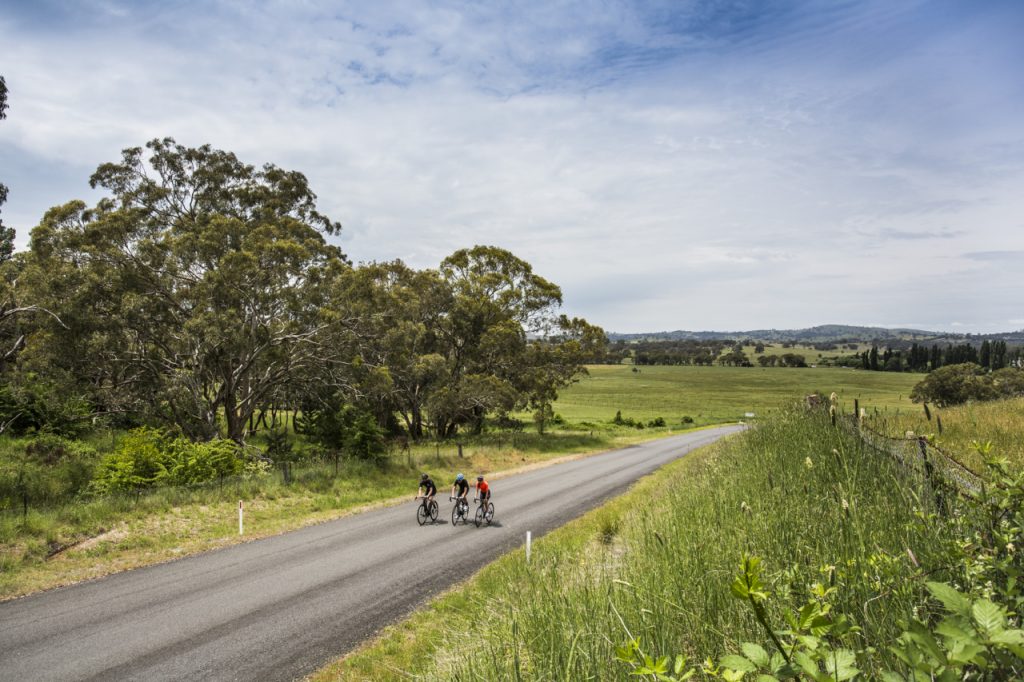 ‘I must have forgotten my beard today,’ says a smirking local called Charlie to Marcus Enno (Beardy McBeard) and Flynn Douglas as we arrive a few minutes before sunrise at the city’s outdoor velodrome, the start and finish point for today’s full course reccy and the location come game day. With a chill in the air, cold legs and most of us still waking up, the joke certainly breaks the ice. ‘I’m Marcus’ and ‘I’m Flynn’ reply the two bearded Sydneysiders. Time to roll out.

With more than 2,000m of climbing and an official deadline of eight hours, it’s clear the course ahead is no spring cycle. Having looked over the profile the night prior, us out-of-towners are feeling a little anxious. The first half is essentially downhill with the second seemingly a mirror image of the first. And just like the original and sellout Peaks Challenge held in Falls Creek (next year taking place on the weekend following the Orange Challenge), there are no shortcuts. Intimidated and excited at the same time, there’s something a tad special about taking on a sportive, Gran Fondo or even a training ride where the only way to get home is to continue moving forward. 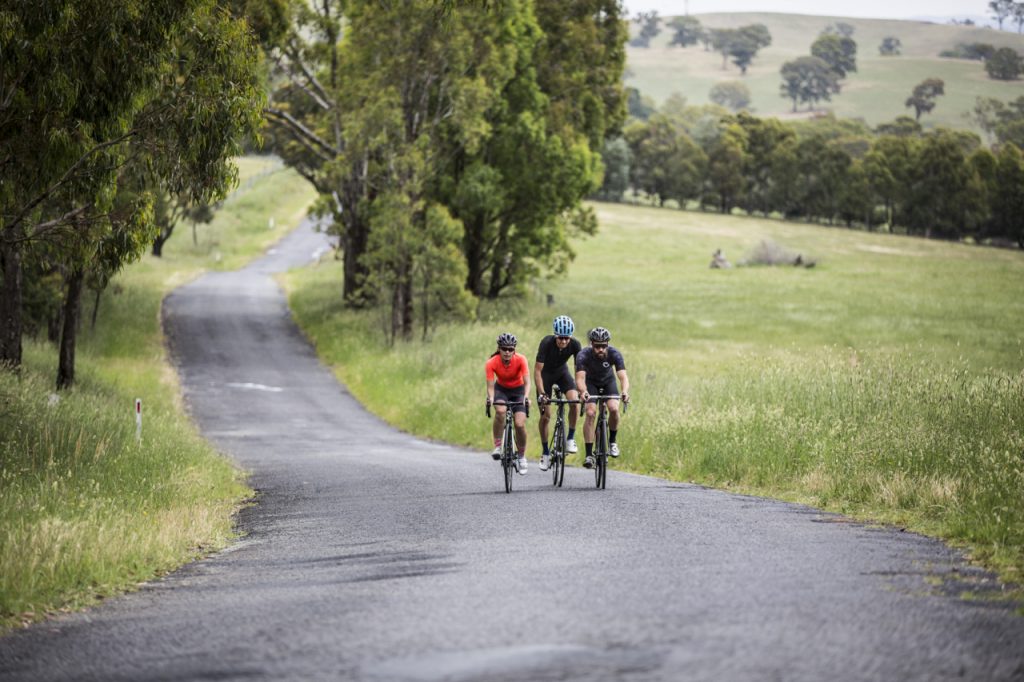 While technically not the highest point on the route – that’s saved for later – just 11km in we reach the summit of Cargo Road. We plummet, albeit briefly, towards Bowan Park Road, Lidster and make a right-hand turn. We may be in the country, but Cargo Road is considered a major artery into Orange and, while quiet and just two lanes wide, the next tree-covered detour feels even more remote. A kilometre or so later we’re greeted by what would turn out to be the best viewpoint of the day, so if you’re feeling snap-happy, this is the place to stop.

The top of the hill – you’ll know when you get there – faces north-west and provides an amazing view of the Boree and Cudal valleys below, interrupted only by a few rolling green pastures. Unless you’re on a time schedule, a quick breather here won’t hurt, and you can always make up for it over the following 20km that steer downward towards Cudal. 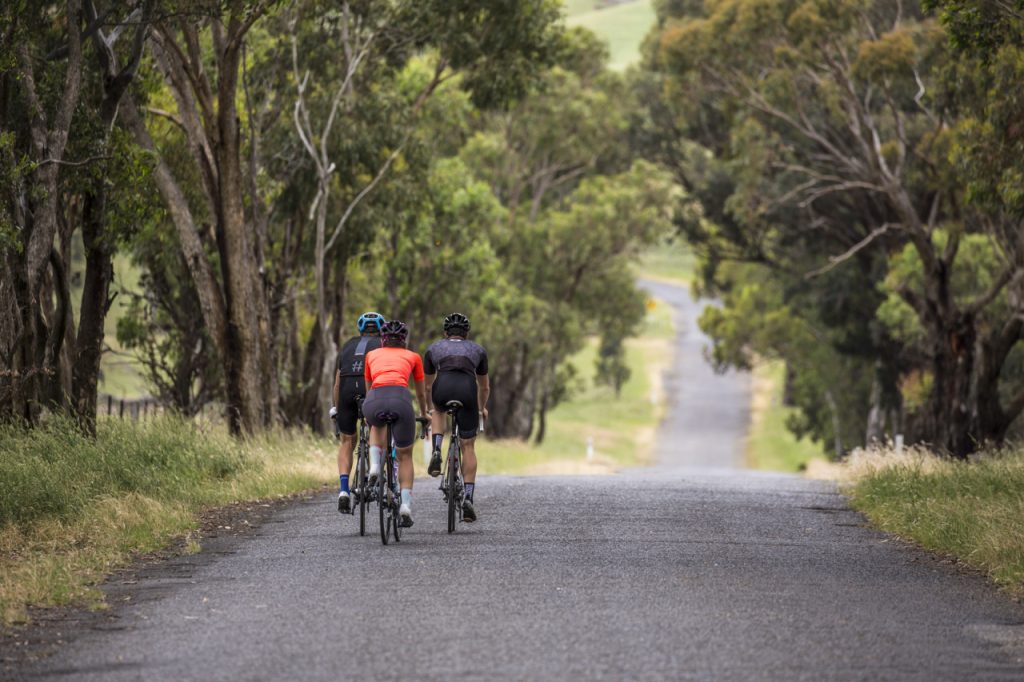 It’s a good 8km of rapid descending during which, even as first-timers on the route, we felt safe enough to let the brakes go and really strap in. Lacking any notable bends or corners, this was a surprising way to start off a ride that’s meant to leave us more than a little sore by the end. The following 13km, a bit flatter, are also a breeze thanks to the marginal drop in altitude. Joined by plenty of grass-fed locals, it’s quiet country out here and the lush green hills and golden fields keep our eyes busy while the cosmopolitan bunch consisting of Sydneysiders, Melburnians and locals chatter to each other in the warming morning light.

We reach Cudal with an average speed well over 30km/h and, after a quick relief break, most of us quietly start to ponder our late breakfast options. ‘We’ll have this done in no time,’ says Marcus. Most of the “outsiders” nod in agreement, while the locals do little to suggest otherwise. It’s around 35km till we hit our next check point in Canowindra (pronounced “Ca-noun-dra”).

A change of course southbound sees the journey remain easy-going along Canowindra Road. Charlie is keen to push the pace and makes his intentions clear by rolling in front and straight past Flynn and me. ‘Feels like a coffee shop ride back there,’ he teases. After a little coaxing he’s soon back with the group but now riding in the wind. ‘This is the place where you can really get things moving. We’re often doing up to 50km/h along this stretch, especially if we have a similar tailwind like today. But it’s later on where everything falls apart,’ he chuckles. Seems our local bunch has ridden along here more than a few times.

He’s not wrong. Before we know it we arrive at the Canowindra Trading Store – a seemingly terrible place to allow rampant cyclists to enter, but which we’re told is the perfect spot to enjoy a coffee in the sun. We’re just over a couple of hours into the ride and some question the need to stop, but we pull in for refreshments anyway.

Even those who expressed mild objections soon find themselves ordering a light snack, coffees and even milkshakes. ‘This is where it really starts,’ explains Age Group Duathlon World Champion Janet Martin, also along for the ride today. Her comment prompts our fourth Sydney rider Shahrzad (Shaz) to reveal that her longest ride distance to date is 110km and that, while anxious, she’s also fuelled by determination to get through today’s epic. That and her coffee, anyway. 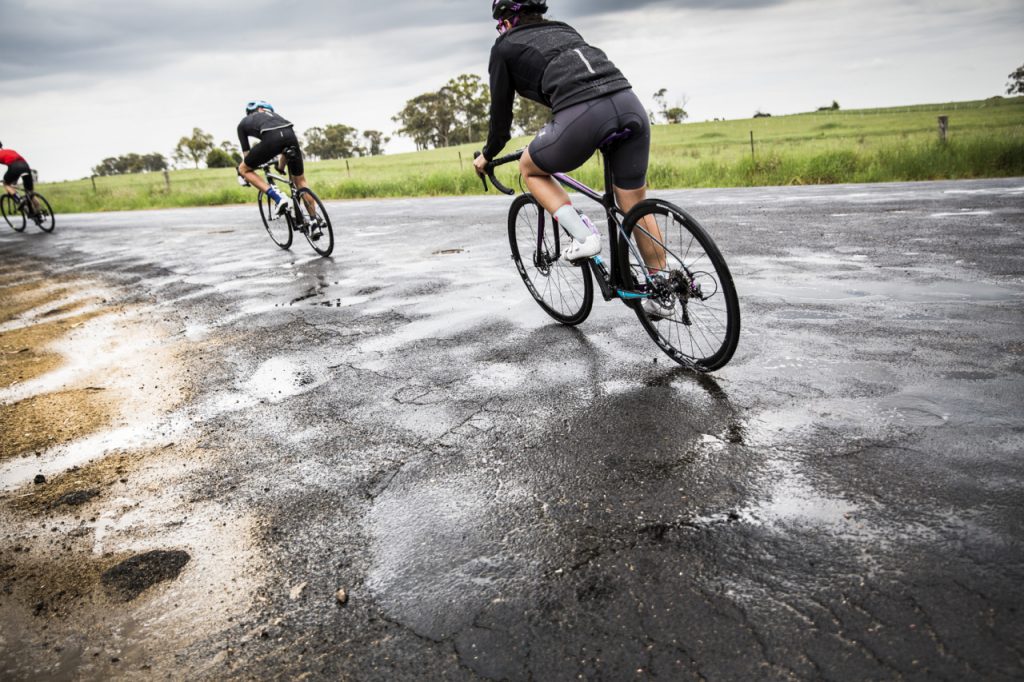 With the route shaped more like a square than a circle, we’ve changed direction again. No longer caressed by the prevailing northerly, the wind is now across our shoulder as we tackle the first of the leg-sapping hills. If Bowan Park Road was the pinnacle, Canowindra is the low point of the ride. Everything from here, conveniently also the halfway mark, is on the up. Most significant is the elevation. Sitting at just over 300m above sea level, we’ve got a bit of ground to cover if we’re to reach the true summit of De Ronde, which is somewhere around the 140km mark.

In a similar vein to many of Bicycle Network’s other Challenges, the Orange event does provide some clear psychological markers to assist with making it through the day. The first was Cudal, then Canowindra, and the next is Mandurama (pronounced ‘Man-dew-ra-ma’ – you’ll thank us later when trying to explain to your friends and family just where you’ve been and how far you travelled. Like any great trip or holiday, learning the local language is all part of the experience.)

Mandurama comes after 120km and, for us, signifies the final rest stop of the day. ‘The Post Office is the place to stop,’ says Steve. That said, those with a thirst larger than a soda and a hunger greater than a toastie or bag of snakes can satisfy may want to venture across the road to the Royal Hotel Mandurama, where a beer garden and assortment of boutique beers await. But we’re keen to keep it brief. With the threat of an afternoon storm, we opt for the convenient solution before heading into the ‘winter’ part of Orange. 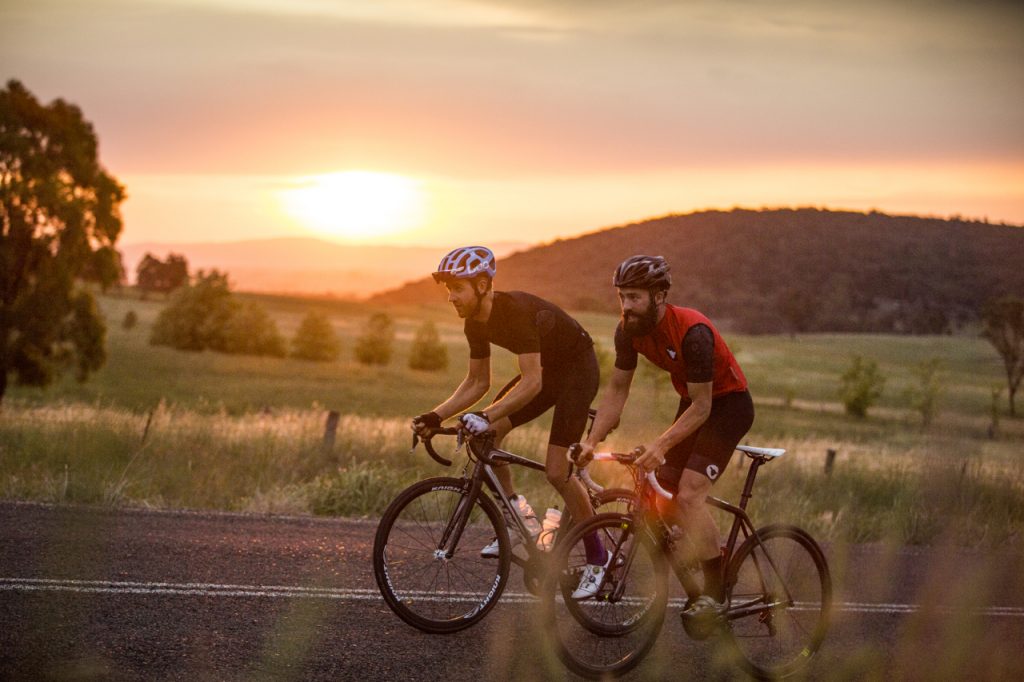 The moss-covered road and lush green foliage tell the tale as we enter the final 25km of testing terrain. We’ve been on the road for nearly five hours, including stops, and are yet to experience anything more than near-perfect roads. That all changes when we depart Mandurama for what is the hardest part of the route. While it wouldn’t be overly difficult with fresh legs, like any great Gran Fondo it’s the culmination of kilometres, wind and hills that make it tough. Burnt Yards Road is demonstrating exactly that, with relentless rollers and a stiff head wind sapping the group’s energy. 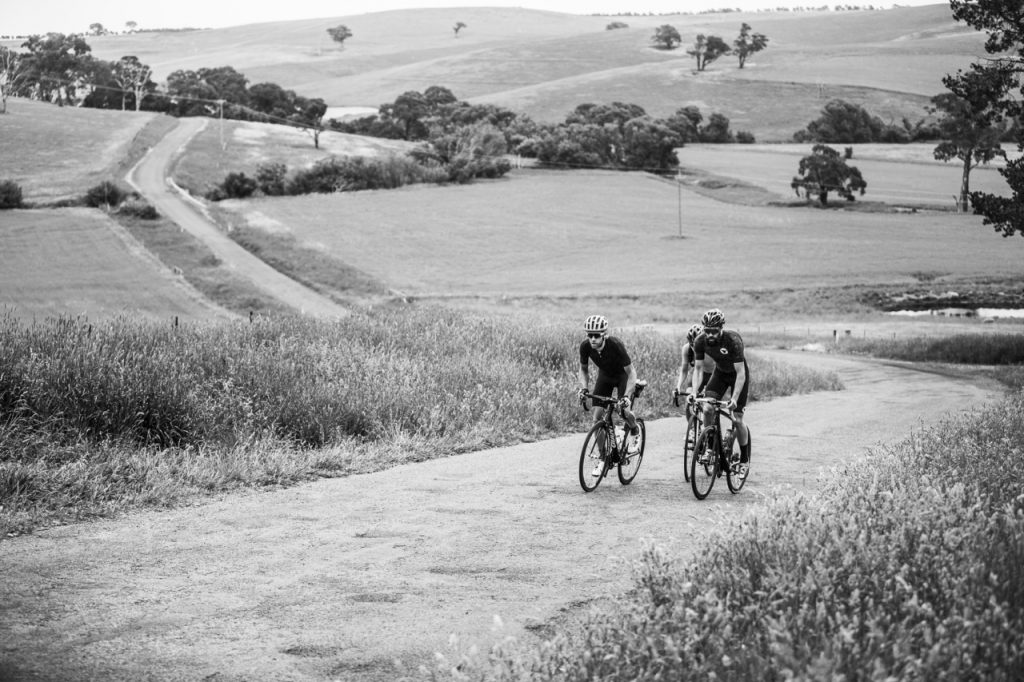 It’s relatively flat from here on in, but after the testing wind, roads, hills and heat of the day, the easier-going final hour is well received. This is where you can start to really soak in the adventure you’ve (nearly) conquered and start to think about that long-awaited beer as you enter the velodrome for the final time.

A lap of honour, high-fives and hugs with your friends and it’s off to celebrate in the free beer, cider and food festival. Just what Bicycle Network has planned for the finish on Sunday, March 5, 2017 is yet to be fully revealed – but whatever’s in store, we’re confident it will be both refreshing and delicious.

Entry details can be found on the Bicycle Network Orange Challenge microsite.

Because everyone loves a good stat 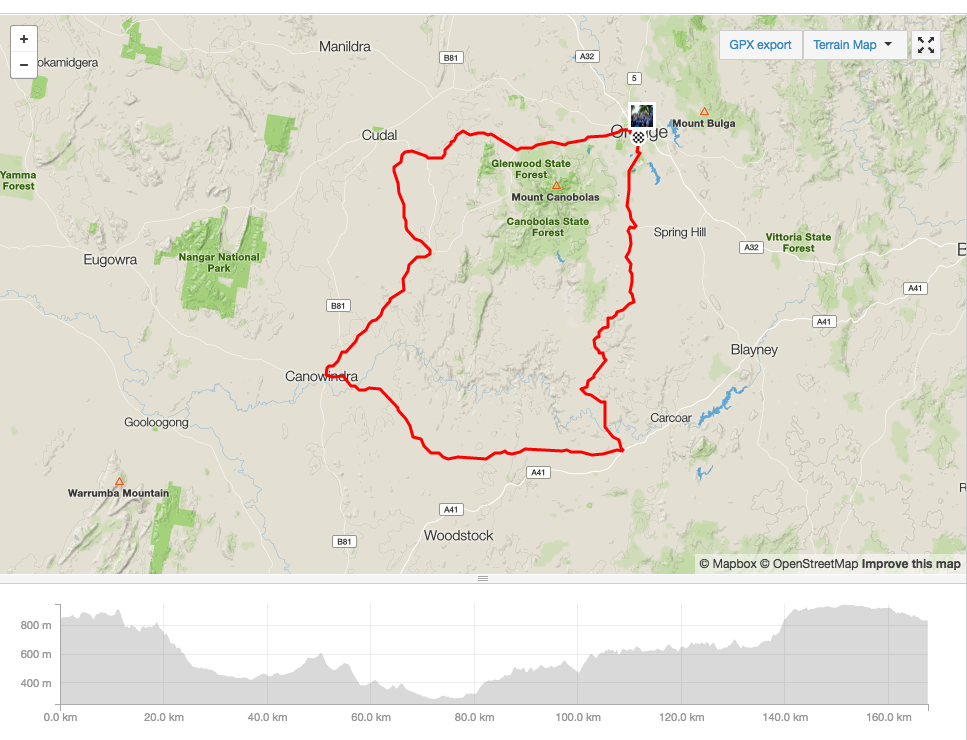 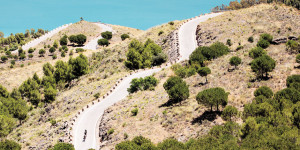 Alpujarras, Spain: Turning up the heat