When Peter Sagan made a rare trip to Australia and the surfers’ paradise of Noosa, Cyclist’s Matthew Keenan was there to meet – and give us a unique insight into – the champion Slovakian

In the business world, someone who is highly successful but a little left of centre is referred to as eccentric; on the other hand, an average businessperson who leans a little left is called crazy. On the sporting field, a champion athlete who is a little bit naughty is labelled charismatic; but a middle-of-the-field athlete with a naughty streak is simply unprofessional.

Peter Sagan is both eccentric and charismatic. He also has a sharp sense of humour, which was highlighted by his tongue-in-cheek recounting of his arrival at the Australian customs desk at Sydney Airport. ‘The women at the airport said I didn’t have the right visa. I said, “Look, it’s okay – I’m Peter.”’

In the words of Monty Python, Sagan could be the Messiah – or just a very naughty boy. In his native Slovakia, though, there’s no doubt about it – he’s very much the Messiah. According to his older brother, Juraj, Peter is the brightest star in all of Slovakian sport. A household name, he has truly put cycling on the map in his home country.

His success on the bike is obvious. For most cyclists, two green jerseys and four stage wins at the Tour de France would be enough for a successful career even at retirement. But Sagan is a different story. He’s just getting started.

Yet for all his victories, it’s his antics beyond the results sheet that catch the
most attention – none more so than this year’s infamous Tour of Flanders podium posterior pinch. No amount of monos could top it for general media coverage, social media debate and internet forum hate. For better or worse, one thing is for sure – the man is a human headline. 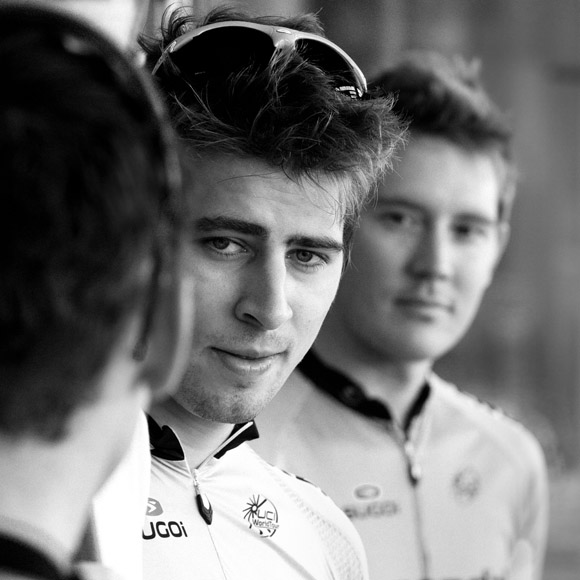 If those who condemned the Slovakian for his podium faux-pas were hoping to see him completely shunned by women, they’re in for a disappointment. On his recent trip to Noosa, Sagan couldn’t walk down the beachside town’s main street without being hounded for photo requests – mainly from women, and often in little more than bikinis.

For some, a photo with Sagan is seen as a publicity opportunity. After the Slovakian spent almost an hour learning to surf and then more time being interviewed by three television networks, the bikini-clad girls from the Wiggle team were waiting on the beach ready to pounce. After posing for the photos, Sagan was beaming and walked away with a spring in his step saying, ‘Ladies, you made my day.’

While he clearly viewed that particular publicity opportunity as win-win, the 23-year-old has also had to learn to pick his moments. Prior to the Subaru Australian Open Criterium – the race that brought him to Noosa in the first place – Sagan received a photo opportunity request from Loren Rowney’s manager.

For those who don’t know the whole story, just one week after Sagan’s infamous pinch, Rowney, who rides for Specialized-Lululemon, decided to turn the tables on the men, cheekily grabbing the bottom of a young male official after the Redlands Bicycle Classic in the United States.

While Rowney was keen to stage a joking mutual pinch, it was clear Sagan had learnt his lesson

Even though some condemned the joke – particularly considering Sagan had been forced to issue a grovelling apology in the fall-out of the sexism row – when the two were introduced, Peter thanked Loren for lightening the moment for him and taking a little heat out of the whole affair. And while Rowney was keen to stage a joking mutual pinch, it was clear Sagan had learnt his lesson from the scathing criticism he’d received. Once bitten twice shy, he steered away from it, choosing a safe side-by-side photo instead.

Even Australia’s very own Madame Butterfly, Susie O’Neill, and her husband Cliff couldn’t resist a photo with Sagan. The dual Olympic gold medallist said she couldn’t recall – even as a kid – ever asking for an athlete’s autograph or photograph. However, she declared the opportunity to get a snap with Sagan too enticing to miss out on. With a reputation of never been flustered even under Olympic pressure, seeing O’Neill drawn in by the magnetism of Sagan illustrated just how infectious his appetite for life can be.

‘Peter is the type of sportsman that kids idolise, and he’s the crowd favourite wherever he goes,’ says Sagan’s Cannondale team-mate, Australian Cameron Wurf. ‘There is no rider like him in the bunch. Not only does he win, but his success also brings a huge amount of enjoyment for all those watching.

‘He is obviously a natural showman. The stunts he can pull on two wheels makes people’s jaws drop, especially when you see it live. And the fact he does them at the end of a 200km-plus races speaks volumes for his appreciation of those supporting him and the sport. At any opportunity he’ll put on a bit of a show.’

Sagan has been doing stunts on a bike for a long time. He started racing bikes as a nine-year-old, so having fun has always been at the top of his to do list. ‘I’ve done all cycling,’ he says. ‘When I started I just wanted to do downhill mountain biking, but my parents said it was too dangerous. I even did track cycling for three or four years, from 12 to 14, but that is too boring. It’s just going round and round and round in circles. It’s not for me.’

One thing is for certain – when you chat with Peter Sagan, you get the real Peter Sagan, every time. There is no manager, no press officer, no pre-rehearsed lines to appease sponsors. There is nothing but his raw thoughts. It’s refreshing in a time of widespread image micro-management throughout sport.

You get the real Peter Sagan. There’s no manager, no press officer, no rehearsed lines to appease sponsors

‘Regardless of the situation, everybody knows Peter will show his true emotion,’ Wurf says. ‘This in turn makes him even more popular with the public, because people get to see and feel what he is feeling so they can relate to the character that is Peter Sagan. Equally, should things not go his way or something happen that he’s not happy about, he is not afraid to let it be known.’

This honesty remains when talking about his cycling influences. Having grown up watching a drug- tarnished generation of cyclists, Sagan puts no disclaimers on Jan Ullrich being his childhood cycling hero. As for other sports – tennis, football, athletics? – Sagan offers no names. ‘No heroes from normal sports,’  he says. ‘Just adrenaline sports.’ Going fast on two wheels is his thing. To get away from the pressures of being one of cycling’s biggest names, he does moto-cross and downhill mountain biking in the off-season. In fact, adrenaline makes a regular appearance in any discussion about how he entertains himself. When asked about life after his career on the road, cycling and adrenaline are still a big part of it. ‘I did some things with Red Bull when I was younger and it would be a dream to make a Red Bull documentary after I stop racing,’ Sagan says.

It’s just the type of rock-star move we’ve come to expect from Sagan – and it certainly wouldn’t surprise his team-mates. ‘Racing with him is a bit like being in a rock band,’ Wurf muses. ‘Without the bass guitarist, there is no foundation for the lead singer to express their voice. The work of all his team-mates is what invariably lays the ground work for him to take centre stage and express his unique voice.’ 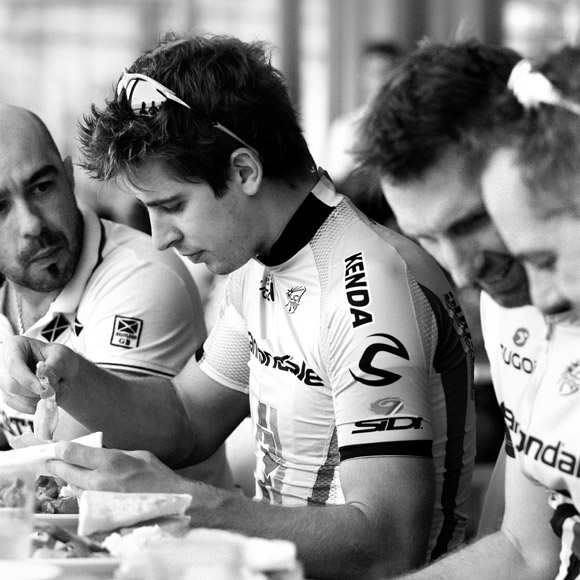 Most professional road cyclists, when asked about life after cycling, talk of working as a sports director, maybe a role in the media, or just generally a quieter life that allows for more time at home. Sagan, on the other hand, is not the type to slow down. There’s every chance the pace of his life will increase once away from the regimented calendar of the UCI WorldTour.

Still, he is clearly grateful for the cards he has been dealt in life. ‘I didn’t really know what I wanted to do as a kid,’ he says. ‘But now I feel like my life has been filled with so many dreams. Last week I was sumo wrestling in Japan, this week I am surfing in Australia. Sometimes I think it’s too much, but I know I’m very lucky.’

Last week I was sumo wrestling in Japan. This week I’m surfing in Australia. I know I’m very lucky

According to  Wurf, this attitude is reflected in Sagan’s leadership style.
‘Peter won’t ask for any support unless he truly believes he can win the race,’ Wurf explains. ‘He always shows the utmost respect to his team-mates and is constantly showing his appreciation throughout the race. And although he crosses the line first and gets all the headlines, he always makes sure we feel a part of it. He is great captain to ride for.’

Wurf says the Cannondale team has been anxious to ensure Sagan gets what he needs. However, that eagerness to please the captain can become a little overbearing at times, so Sagan’s brief stint away from the team and away from Europe will prove crucial to his ability to freshen up mentally for season 2014.

And freshen up he has – Sagan made the most of his stay in Noosa and let his hair down a little. At one point, during a Q&A session with four riders from Orica-GreenEDGE, Sagan lent across to Wurf and said, ‘This is boring. When do we get beer?’ It wasn’t long after that that the Slovakian, his brother, a friend and Wurf were relaxing on the sidewalk at a restaurant on Noosa’s main drag, having lunch and enjoying a few beverages. Again, there was no concern for how this could be perceived. He was making the most of his off-season.

It was just Peter being Peter. 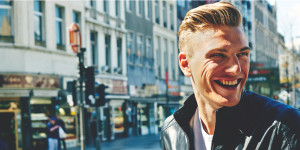