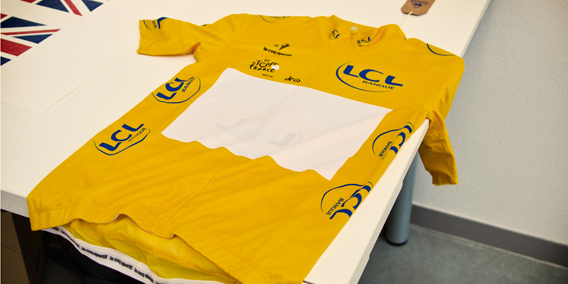 Behind the Yellow Jersey

After 24 years away, Le Coq Sportif is once again the provider of yellow jerseys to the Tour de France, but it has done more than simply dust off its old designs

“Our work has only been stopped twice,” says David Pécard, director of technical textiles at Le Coq Sportif. “Once during the Second World War because our brand was too French and again during the late 1970s when our company took a misjudged direction.”

In 2012 sports clothing brand Le Coq Sportif turned 130 years old and it has celebrated by taking on the production of the yellow jersey for the Tour de France. It’s not the first time the company has been involved with the Tour. “We made the jersey from 1951 until we stopped production in the 1980s so we have a lot of history with the race,” says Pécard. “Returning to the role of manufacturer of the yellow jersey – not only an icon of sport but an image of France – is a great honour for us.”

It’s also a tricky balancing act. The jersey has to please everyone: the ASO (organiser of the Tour de France); the sponsors and of course the riders who have to wear it. “The first two demands were fairly simple to sort out,” says Pécard. “We wanted the jersey to be as free from logos as possible, and we worked with LCL [the Tour’s main sponsor] to make sure that their logos were large enough yet kept enough yellow on the jersey to celebrate the history of the race. For the demands of the riders we spent 18 months working with ex-professional cyclists, skiers and the best material suppliers in Europe to create something that was aerodynamic, lightweight and breathable, raising the bar for cycling jerseys. Our facility in Romilly-Sur-Seine [near Paris] was extended so that we could do all of our prototypes in-house before sending them to our preferred manufacturer in Portugal. Now if we have an idea in the morning we can make a prototype by the afternoon.”

The end result is pretty hi-tech. Pécard says, “We use four different materials. Firstly a lightweight polyester for the front, which is form-fitting and aerodynamic. There are two different types of mesh on the back to allow the rider to lose body heat, a finer one being used at the nape of the neck where they sweat most. Finally there is Lycra on the ends of the sleeves. This makes for a more aerodynamic fit and also LCL wanted to make sure that their logo was in the prime position. The jersey is bonded together on the shoulders, which we had to invest in new machines for, to improve comfort and aerodynamics.”

It doesn’t end there. “Not only did we produce the leader’s race jerseys we also had to design a full range of extra clothing for the classification leader. Each rider gets a total of nine different pieces of clothing when they are leader. The protocol jersey for the podium [with the zip up the back], a heavy and lightweight long-sleeve jersey, a rain jacket, a heavy and lightweight vest, a pair of arm warmers, a skin suit and a yellow jersey. All have to give the highest performance while conveying the spirit of yellow.”

With 198 riders in the Tour de France, how is Le Coq Sportif prepared for each potential victor? Pécard explains. “We have a truck at the race with all the clothing sizes in it. In the evening our team brands up the rest of the clothing for the leader, normally in two sizes so that they can get the best fit. The leader gets a new jersey every evening. This year there were only two different riders in yellow during the Tour so our job was a bit less complicated. In total we produced about 1,000 items for the Tour. There are naturally some left over, which are kept for sponsors.”

With a five-year contract, what is the future of Le Coq Sportif and the Tour? Pécard concludes, “This is only just the beginning of our work with the yellow jersey. We are developing technologies that we will roll out into a jersey available to the public. Next year is the 100th Tour and we have some special ideas already.” 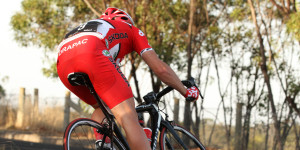