The Grafton to Inverell Cycle Classic is one of Australia’s oldest and, some would say, toughest races. Cyclist tracked down its oldest-ever finisher, 71-year-old Mick Patton, to find out what makes the Grafton so special…

Mick Patton has just arrived home from one of his last training rides before the 57th (2017) Grafton to Inverell Cycle Classic (2018 marks the 58th edition). He’s gasping when he answers the phone for our interview. ‘Just give me a minute mate,’ he says between breaths. From the sounds down the line, I can tell he’s wheeling his bike inside somewhere. He drops his riding shoes and helmet on the wooden floor before grabbing the phone again. ‘Right, Craig – I’m ready.’ 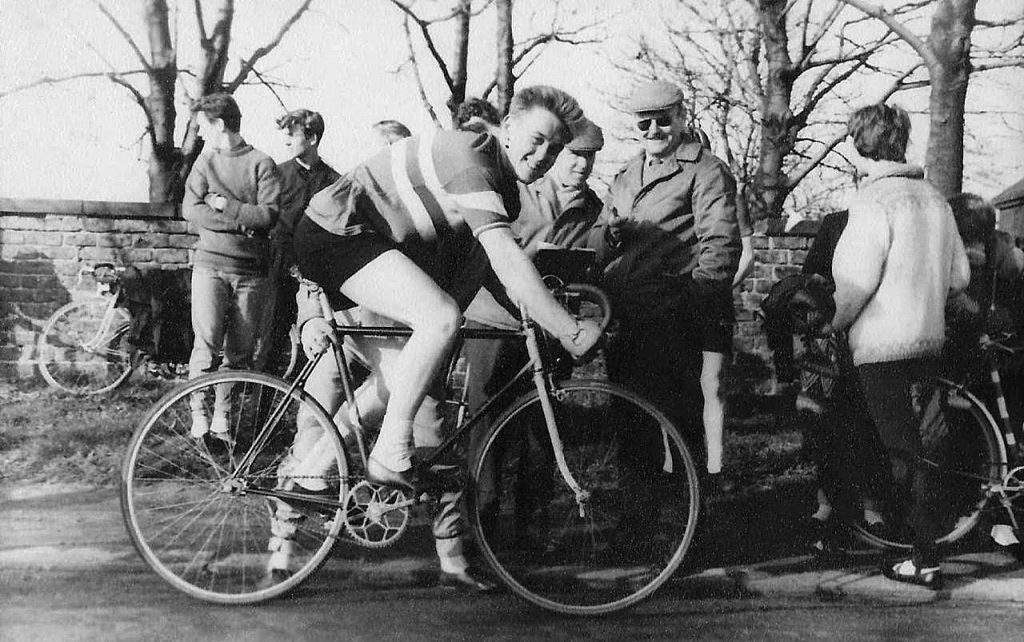 Many regard “the Grafton” as Australia’s hardest one-day road race. At 228km long with 3,382m of climbing around the Gibraltar range in northern NSW, it’s also known as the Mountain Classic. But it’s just another challenge for Mick, the tough little prawn-trawler owner from Queensland’s Sunshine Coast.

Mick will be 72 this year, and he’s the oldest ever finisher of this race – an event that even some of the young guns struggle with. He likes the Grafton so much, in fact, that the 57th edition was his 11th time on the start line. Mick has had a good record in the Grafton, finishing in all his 11 starts, the first being 30 years ago in 1987.

‘The Grafton course is just fantastic,’ Mick says. ‘You’ve got lots of hills and open stretches. It’s a bloody hard race. Once you get past Glen Innes, you’ve got about 70km to go, and you get a bit of respite on the downhills, so you can sort of kick on again. But then you’ve got some hard climbs again before the finish, so it makes for interesting racing.’

The 2017 Grafton certainly was an interesting race. The fastest on record in fact – Neil Van Der Ploeg’s winning time of 5:46:26 carved more than 10 minutes off the previous record time of 5:57:55 set in 2016 by Pat Lane (the first rider to break six hours). Following the successful move of the race from October to May in 2016, the 57th Grafton was held on May 13, 2017. The start list numbered well over 300 riders, with race organisers declaring that entries are up since the shift to autumn.

For his part, it’s a move Mick agrees with. ‘The good thing about May is you haven’t got the heat, or weather extremes,’ he says. ‘You haven’t got the cramping problems you normally get. Like in 2014, it was 35 degrees and they went through 1,200 bottles of water. They ran out. There was no water after Glen Innes.’

The conditions make a big difference, he adds. ‘A lot of times we’ve had that howling head wind. One time, in 2005 I think, it was blowing that hard that trees were blowing all over the road, and it was actually snowing just south of Glen Innes when we started. I did 8hrs 50 that day,’ he recalls with a chuckle. Conditions were certainly better for Mick this year. He finished his 11th Grafton in a very creditable 7:28:54 – just 20 or so minutes slower than his best time of 7:08, more than 20 years ago, in 1995, when he was 10th in C Grade and 51st overall.

The sprightly 71-year-old is clearly a natural on the bike, with some impressive results under his belt. He has been racing bikes on and off since 1962, when he first started in the United Kingdom, winning the north of England sprint championship back in the days when they raced on grass tracks.

Mick has been a successful veteran racer too. He won the 70+ age title at the 2015 Australian Masters criterium championship in Murwillumbah, and he’s a former UCI World Gran Fondo Champion in the 70+ men’s category after winning the 2016 race in Perth. He made a valiant effort to defend his title in August at the 2017 UCI Gran Fondo World Championships in Albi, France, finishing a credible 12th. But it’s obvious the Grafton occupies a special place in his heart.

‘This Grafton was going to be my last. I was using this as training prep for the Worlds in France in August. There’s no training ride like the Grafton!’ he laughs. ‘But once you get home after the Grafton, you sort of think, “Oh Geez, it’s such an iconic race,” you know?

Iconic indeed. Over the years, the Grafton has attracted the cream of elite Australian cycling, as well as the masters age and club journeymen riders with decades of experience and an obvious love for this classic race. 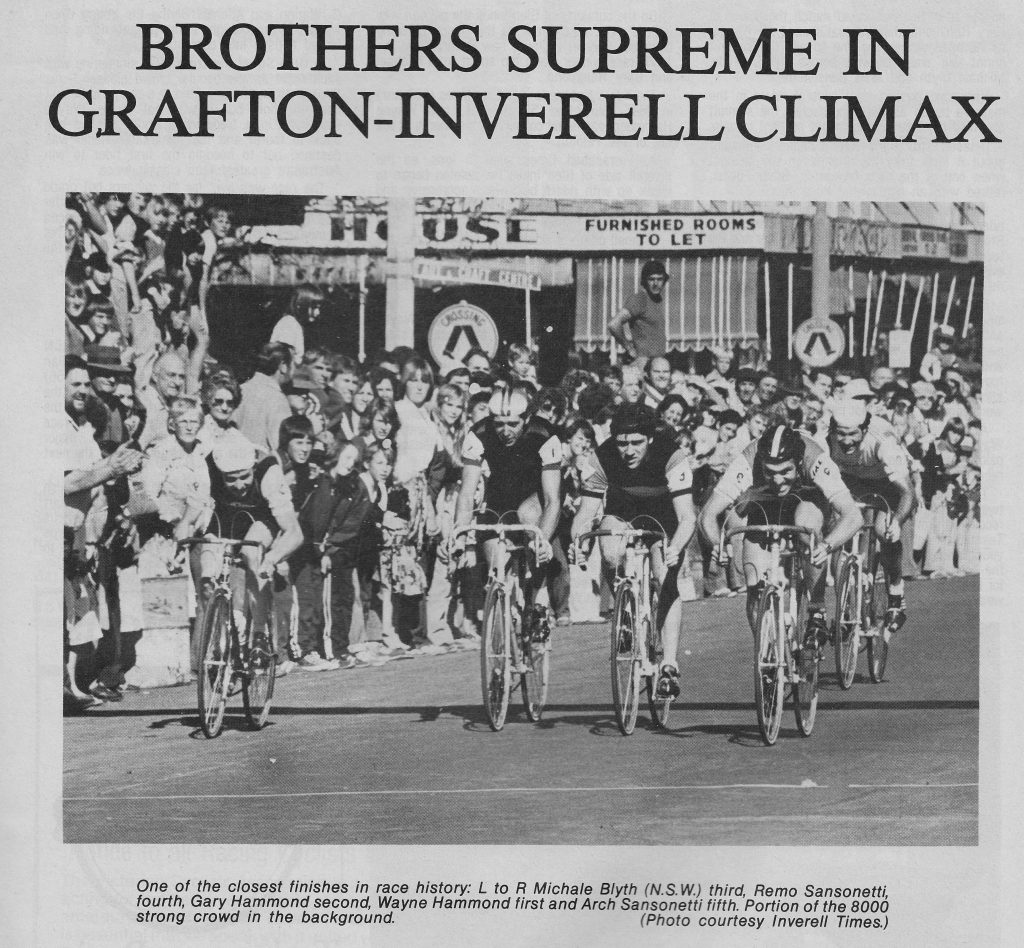 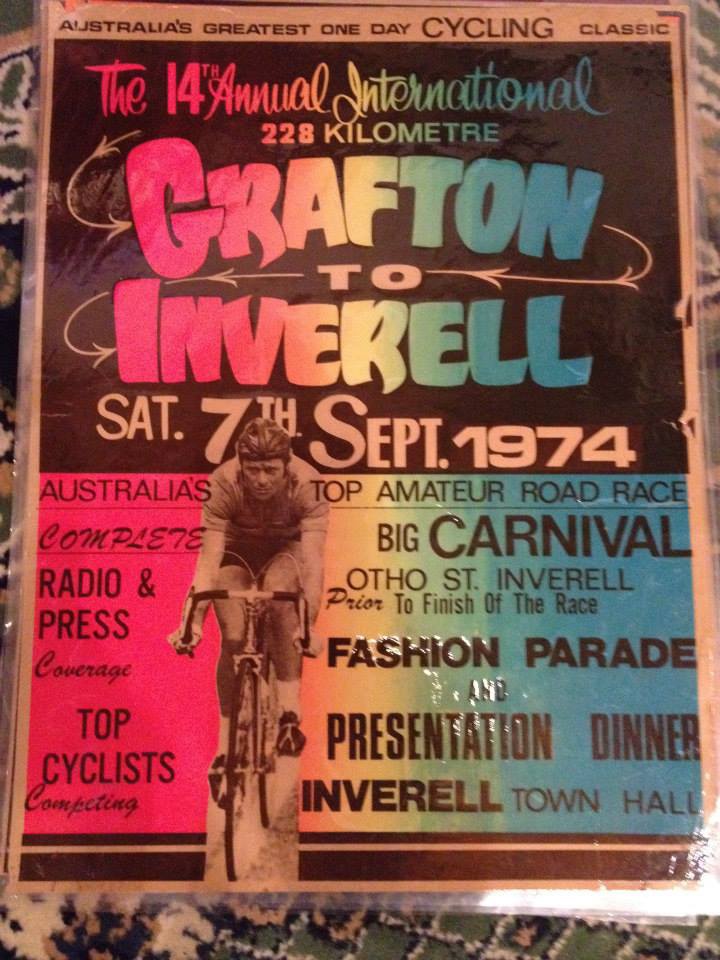 Inverell resident Harold Strahley (1908-1979) conceived of the first Grafton to Inverell Cycle Classic, which was held in 1961. That first edition saw very few entrants, and only 17 finishers on a course that was still under gravel for much of the way. Like other road races in Australia, the Grafton to Inverell began as a handicapped event. The winner in that first year was P Alan Grindal from Victoria (7:39:11 off scratch), a 1960 Rome Olympian and well-known champion rider in his day.

Inverell bike shop owner Jack Griffin also rode in that 1961 race (and other editions). He went on to be race director from 1962 to 1993, and made his mark on the Grafton to Inverell race and Australian cycling generally. His many contributions in the field of cycling (in coaching, race promotion and organising) were acknowledged with Life Membership of Cycling NSW (1982) and an Order of Australia Medal (2003).

One of Griffin’s most significant decisions for the Grafton was the move he and others made by changing the race from a handicap to a mass start format in 1979. Their goal was to bring the race more in line with the big European classic races, and to elevate the Grafton as a revered one-day race in Australia. 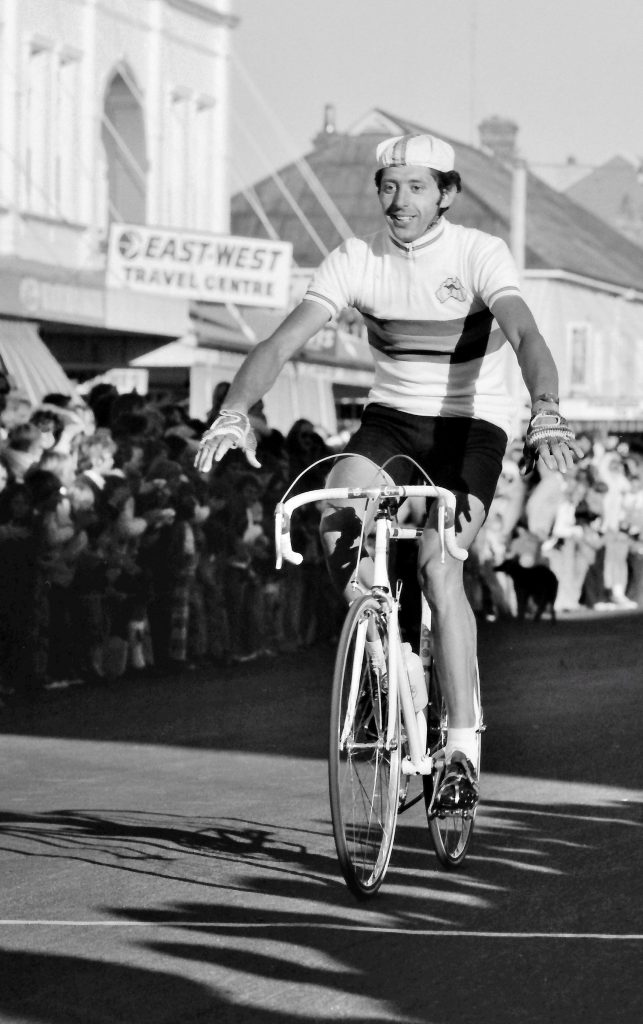 Few would dispute that he achieved his vision. The Grafton to Inverell has attracted class fields over the years, with Australian Champions, Commonwealth and Olympic medalists, and international stars all gracing the start line. Some of the better-known Australian names to stand on the podium in previous editions have included Alan Grindal, Don Wilson, Remo Sansonetti, Wayne and Gary Hammond, Gary Sutton, John Trevorrow, Michael Lynch, Scott Sunderland, David McKenzie, Jamie Drew, Simon Gerrans and Matthew Lloyd.

During the 1980s, this race was also well-attended by international riders from across Europe (e.g., Switzerland, Sweden, Great Britain, Germany, Italy, Norway), the USA, and New Zealand. Indeed, the Grafton to Inverell was run as a UCI international event in 1982, 1984, 1985, 1987, 1988 and 1989. The international teams would use the Grafton as part of their preparation for the Commonwealth Bank Cycle Classic – a Brisbane to Canberra stage race that ran for 19 years before ending in 2000.

RIDERS PASS THE GRAFTON’S MOST DREADED SIGN DURING THE 1976 RACE.

In 1985, Paul Curran from Great Britain won and set a new race record of 6:00:49 before going on to win the 1986 Commonwealth Games road race in Edinburgh.

Perhaps the best-known Kiwi to have graced the Grafton podium was current professional Greg Henderson, who won in 2005. And the highlight for many this year was the inspiring 55th place (+33:41) by New Zealand-based rider Keagan Girdlestone, returning to racing just 10 months after a cycling crash that nearly ended his life.

10 Facts about the Grafton

5. The 57th 2017 Grafton was also the first time a full-distance women’s division was incorporated (previous parallel women’s events have been held since 2004: Celtic Country Classic de femme from Glen Innes to Inverell, and the first Ladies Challenge from Grafton to Glen Innes in 2004 won by Olympic gold medallist Kathy Watt).

7. Noel Mathiske had to finish the 1979 Grafton on a BMX bike borrowed from a spectator after crashing 2km from the finish.

8. The Grafton race format changed to a mass start in 1979 (prior to that it was a handicap).

10. The first Grafton to Inverell Cycle Classic was in 1961. 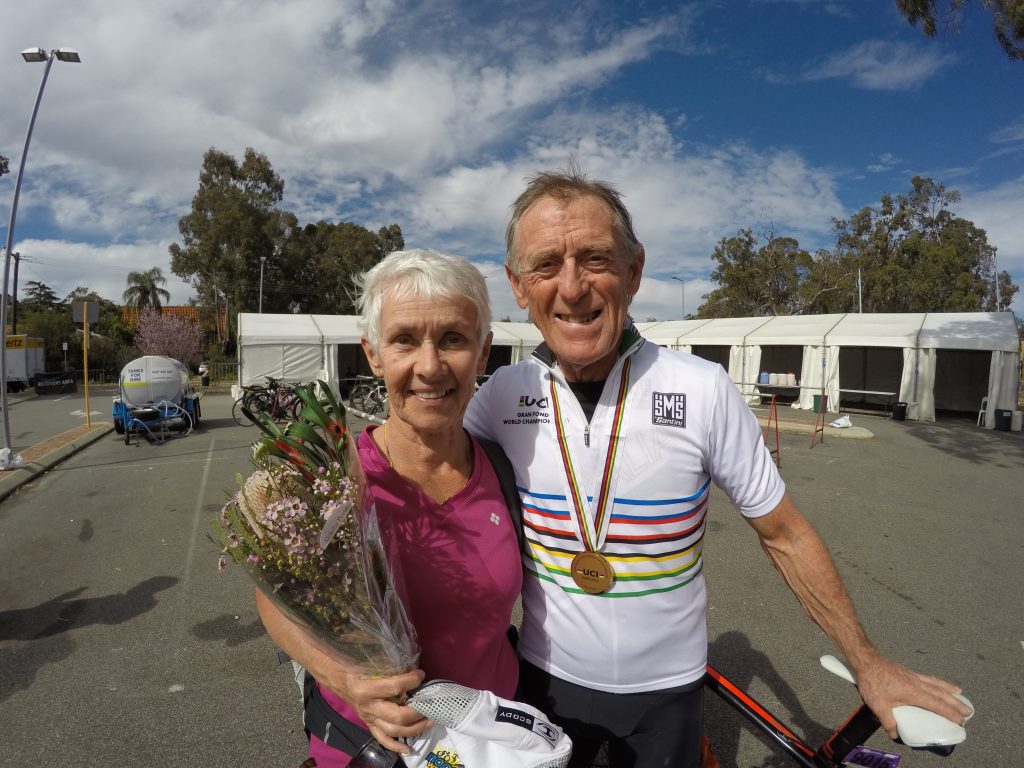 MICK, WITH HIS WIFE KERRIE, AFTER WINNING THE 2016 UCI WORLD70+ MALE GRAN FONDO.

The Grafton to Inverell spirit Looking back through the race reports from past Grafton to Inverell races, one common factor highlighted is the nature of the course itself – a one-day classic course some have argued stands up well against some of the European classics. While the main 18km climb over the Gibraltar Range is only a modest 1,020m above sea level, some profile indicators put the average grade at 5.6% and the maximum grade at 24%. But the truth of the race goes further than that.

The 1961 winner, Alan Grindal, who entered on the spur of the moment after seeing a race advert, was quoted as saying, ‘The ad mentioned the 10-mile climb up Gibraltar Range. What it didn’t mention was the climbs up Cattle Creek, Jackadgery and other sharp climbs that took the fizz out of your legs before you got to the mountain.’

Mick agrees. ‘What a lot of people don’t realise is, the Grafton is all hills,’ he says. ‘It starts off out at Cattle Creek at around 30km with a hard little pinch. You’ve got Jackadgery after that, and then you’ve got the [Gibraltar] range. Then once you get up the range, you’ve got a few good rolling bits, and you normally always get a hard headwind up the top, which sorts a lot of people out.’

What also stands out about this race is the clear affinity the people of Inverell and surrounds have with the race. The northern NSW tablelands town is closely connected with cycling as the birthplace and hometown of well-known professional riders Heinrich Haussler and Scott Sunderland. And the regard for this race is clearly evident in the ways in which the locals celebrate its history and their connection to it. 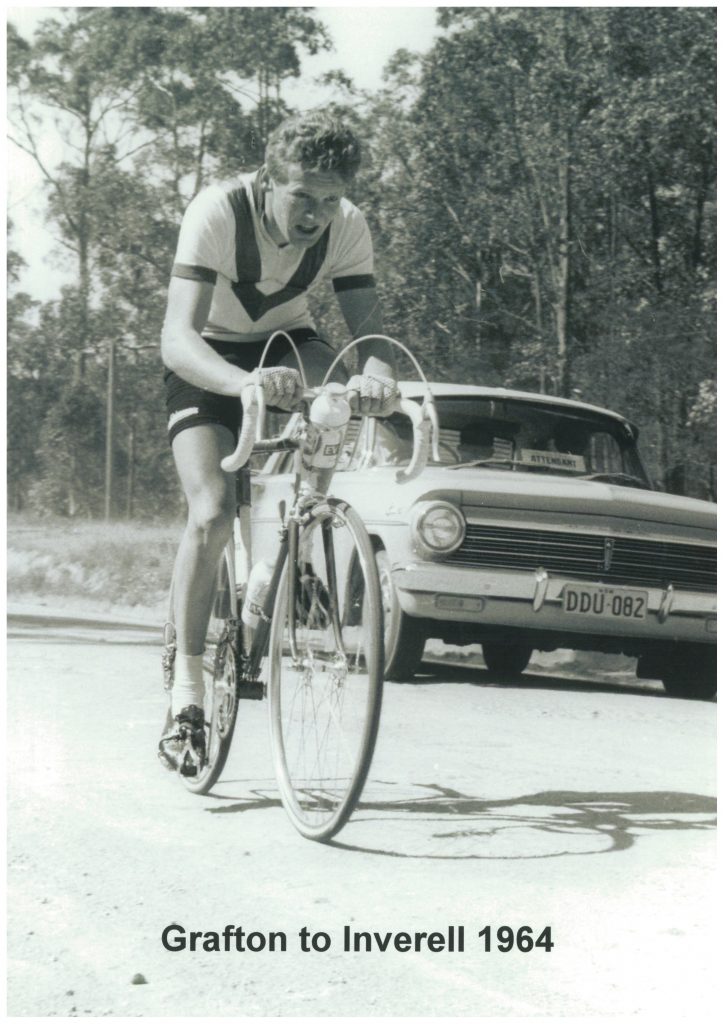 On an Inverell street close to the race finish line, you’ll see the names of all past winners since 1961 engraved on pavers in Rivers Street. And there’s also a public commemorative plaque from the 50th edition in 2010. Race winners also have their names inscribed on the Jack Griffin Memorial Shield, commissioned by Cycling NSW in 2013.

It has also long been a race that’s not afraid to test new ideas to keep racing cyclists and public interest alive. Innovations around this event worthy of mention have included the 2010 veterans cyclo-sportif ride from Glen Innes to Inverell (67km); the women’s Celtic Country Classic de femme, also from Glen Innes to Inverell (as the sixth round of women’s NRS); the first Ladies Challenge from Grafton to Glen Innes in 2004 (won by Olympic gold medalist Kathy Watt); and the Grafton to Inverell cyclo-sportif trial that started in February 2007.

The 57th Grafton in 2017 featured three divisions of races (NRS teams and individuals, division 2 and 3), each starting 10 minutes apart. Two new categories were also added to the 2017 race – the Regional Australia Bank Grafton to Inverell des Femmes women’s race category within the Division 3 race, and the Challenge Category for non-racing riders with a 9hr 30min cut-off time to complete the course.

Mick, the oldest ever multiple finisher of the Grafton to Inverell Cycle Classic, should have the final word. The race is in his blood – indeed, his son Zack has also ridden the Grafton four times (1990-92, and 1995), with a seventh overall in 1990.

‘I just love the Grafton. It’s such a well-organised race with the police, the course, the officials, and everything,’ Mick says. ‘What I love about it is just still being able to go out there and do it at my age. I mean, I just turned 71 and I think to myself, “How can you still do this?” I just feel so lucky that I can still keep riding it, and really enjoying it – going out there and having a crack with the young blokes.”

Craig Fry is a Melbourne-based freelance cycling writer for pushbikewriter.com and Cyclist. Check out @pushbikewriter on Twitter and Instagram.

This year’s Grafton to Inverell will be held on Saturday 12 May. Get all the details around this year’s event here. 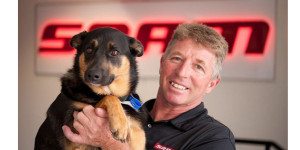