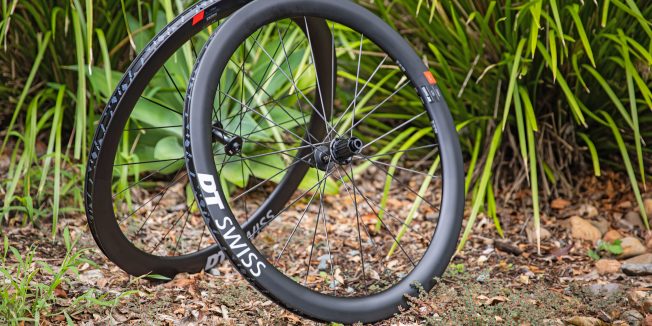 Cyclist spent a couple of months on a pair of DT Swiss ARC 1100s to get a true feel for these new hoops. Here’s our verdict… 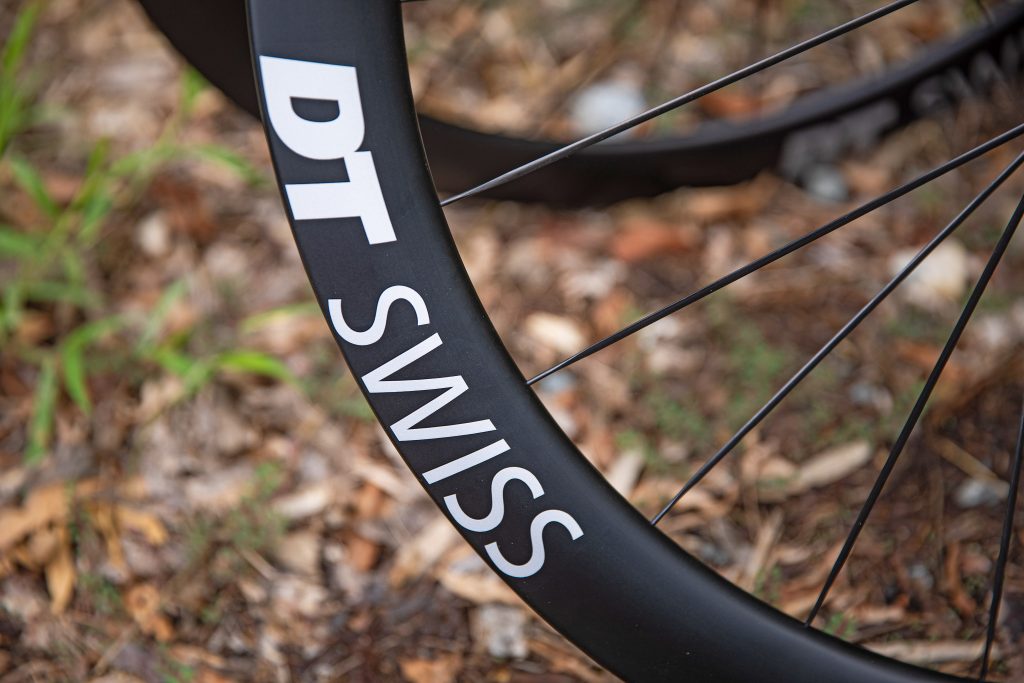 I don’t know about you, but when I think of DT Swiss, the first thing that pops into my head are hubs, and for good reason. DT Swiss hubs are just about bomb and idiot-proof, which is why you’ll also find them strung into Roval and Bontrager wheels, both with and without the DT Swiss Badge. But when the ARC 1100s were revamped last year, they caught my attention for reasons other than the hubs.

Designed in collaboration with aero expert Swiss Side, DT Swiss took its aero optimisation beyond merely looking at rim shape, and aimed to make every single component on the wheel faster and more stable in the wind tunnel.

The most apparent change to the casual observer is the width. DT Swiss has pushed the inner rim width from 17mm out to 20mm, to optimise casing shape and airflow with a 25mm tyre. The rim profile has also changed, but it’s a bit less obvious. Carbon wheels from a generation ago were the classic V-shape, because, well, this is what we thought was fast (thin is fast, right?). Boy, were we wrong. That big flat foil acted like a sail when the winds started to blow from the side, causing unintentional lane changes. 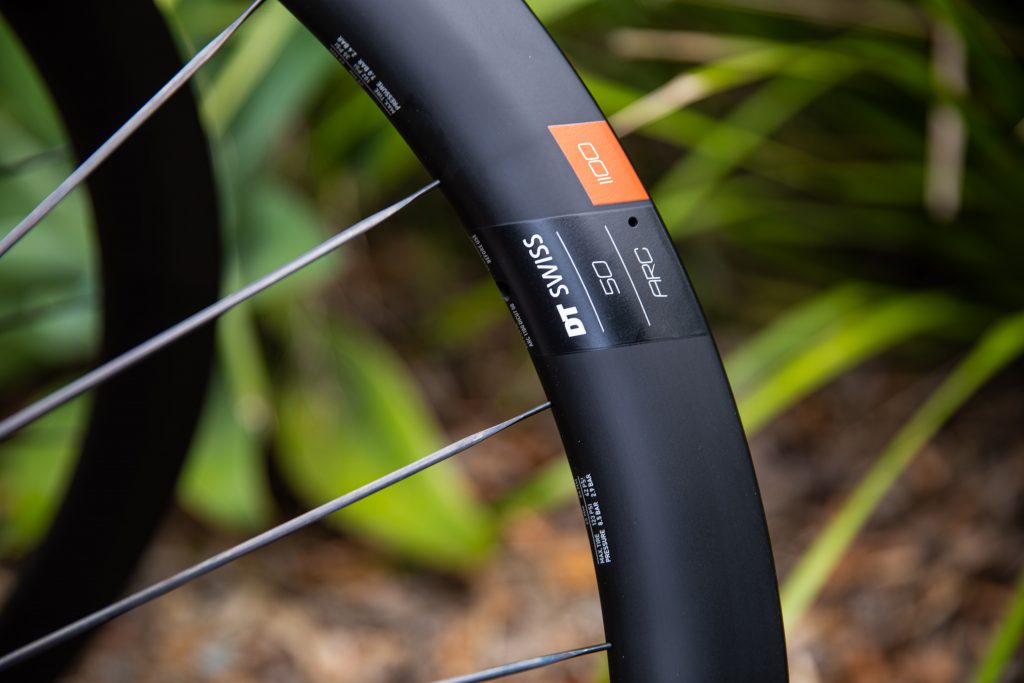 As the industry at large had collective nightmares from handlebars nearly being ripped from riders’ hands due to a light breeze, deep-section carbon wheels shifted to a snub-nosed U-shape. This marked a vast improvement in manners, and sliced through the air with minimal disturbance too. As things have progressed, deep-section wheels have taken a step back, landing somewhere in between the V and U shapes, and the ARC 1100s are following suit.

The idea of a deep section rim is to guide the air along with the faring for as long as possible because, when it detaches or ‘stalls’, it creates drag. This is why deeper rims are faster. But the larger the faring becomes, the more gusts from the side can influence how attached the airflow is. With this in mind, DT Swiss and Swiss Side went about managing buffeting from off-angle winds and measuring pressure waves that push the wheel around in the wind tunnel. Based on the results, they tweaked the rim shape to even out these forces and decrease steering movement. 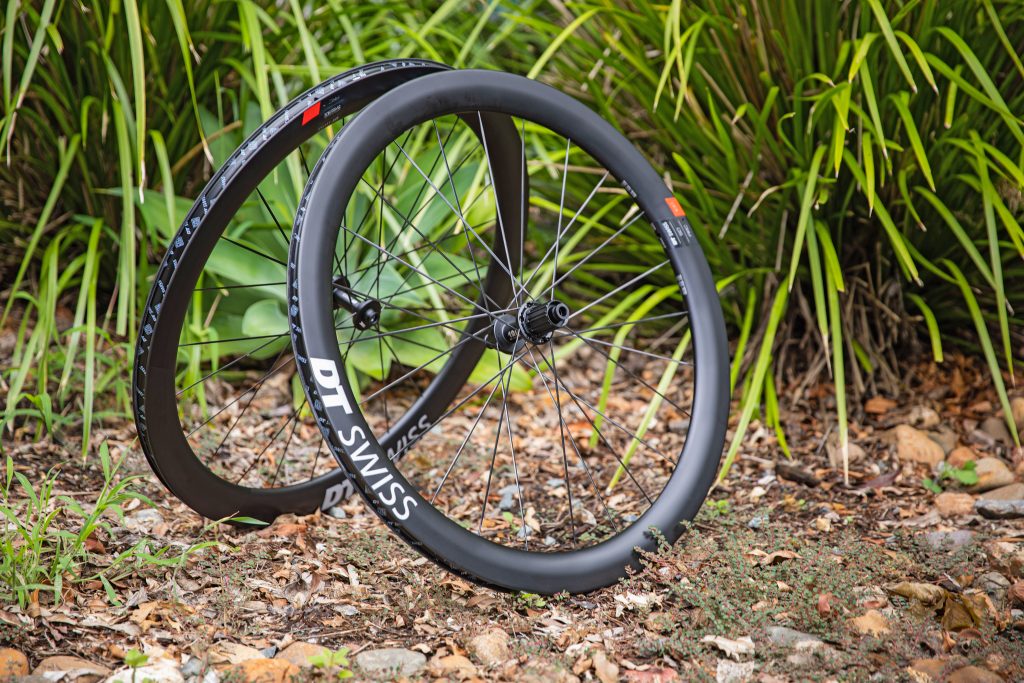 DT Swiss makes some pretty big claims about how much drag the ARC 1100s create. First, the brand says they’re faster than the Zipp 303 and ENVE 5.6 and produce almost no drag at 15° yaw angles. According to DT Swiss wind tunnel data, the deeper version of these wheels creates negative drag, or a sailing effect, at a 15° yaw angle.

Also playing into the aerodynamic equation are the Aerolite II spokes, which are 23% thinner and 35% wider than the ubiquitous but occasionally vulnerable Aerolite. These new spokes are used on the front wheel and non-drive side of the rear wheel, and are said to reduce drag by a further 1.1 grams over the Aero Comp spokes, which are used on the rear wheel’s drive side because they’re more robust.

Of course, until we get that Cyclist Wind Tunnel we’ve been asking the big boss for, there’s no way to verify these claims independently, so we’ll have to take DT Swiss and Swiss Side’s word for it. 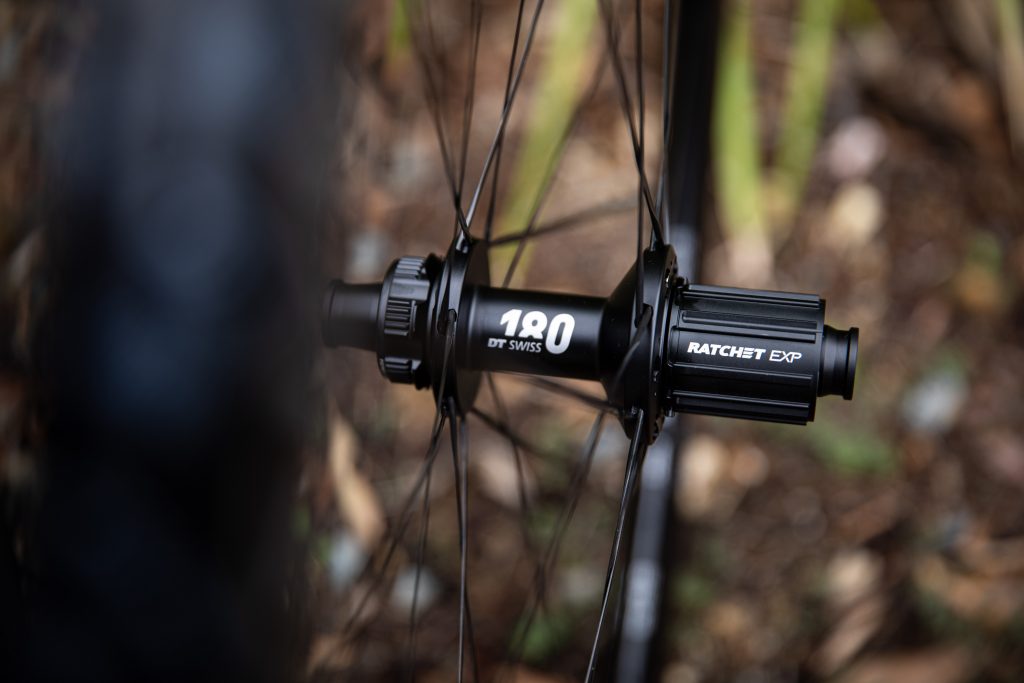 What I can say with some authority, however, is that these wheels feel fast, as any 50mm deep carbon wheelset should. Conducting a bit of bro science using Strava segments and a bit of power data, I compared them against a slightly deeper set of Reynolds AR 58/62 wheels I’m also testing. Riding the same flat 2.1km stretch of road at the same average power, the ARC 1100s were almost half a second faster. Of course, in the real world of different weather conditions, clothing, tyre pressure and myriad other factors, that’s hardly conclusive, but it does show that the ARC 1100s are on par and maybe even above average when it comes to drag.

The claims surrounding crosswinds, on the other hand, are straightforward to test in the real world. I live on the coast, where nasty crosswinds are pretty much a daily occurrence. It’s rare you’re not getting blown in one direction or another, especially if you’re brave enough to don anything deeper than a 50mm wheel. Here I can confirm with complete certainty that DT Swiss is not blowing smoke when making claims about how these wheels react to off-angle gusts. The ARC 1100 hoops are supremely well-mannered. When the gust whips across the road you can still feel it, but the pressure wave is controlled and predictable.

It feels akin to how a 35mm wheel reacts; instead of grabbing you by the handlebars, the gust asks politely that you move over a bit and guides your bike and body gently across the road.

The wheels are, of course, tubeless-ready. The rims come factory taped and are easiest to set up. They even come with set of valves complete with an aero nut and valve cap. 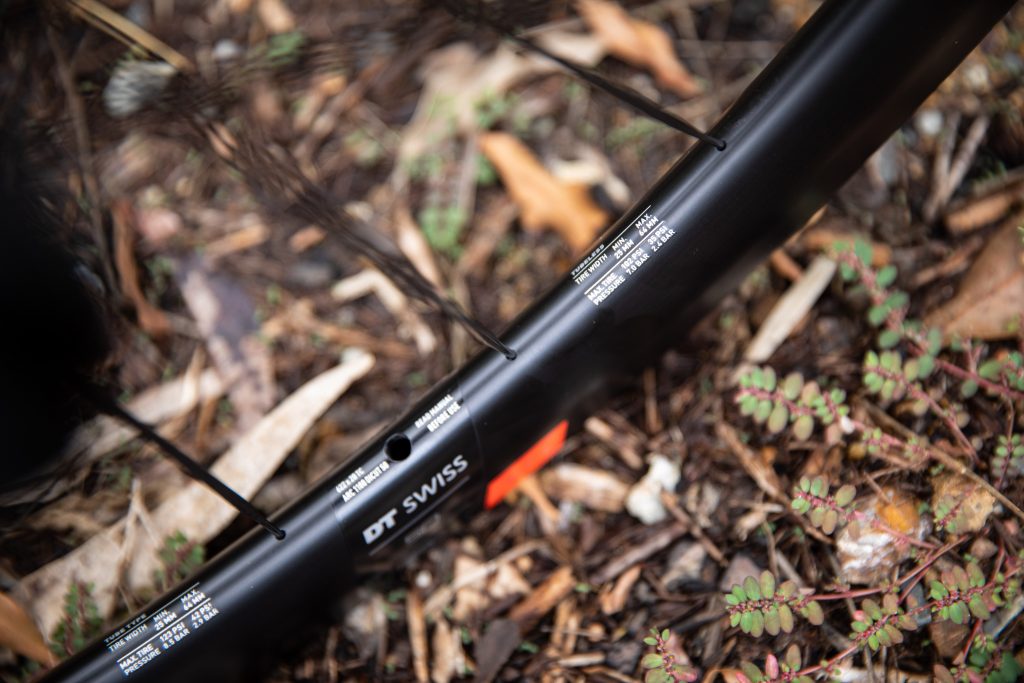 Aero gains at a cost

There is one stumbling point with the ARC 1100s, and it’s due to the internal spoke nipples. I’ll concede that internal nipples clean up the look of the wheel, and they probably play a not-insignificant role in the aero wizardry it seems DT Swiss has achieved.

But – and it’s a big one – if one of your wheels comes out of true, you’re going to have to rip up that beautiful factory DT Swiss rim tape. At this point I’m pretty nifty at laying down tubeless tape neatly, but hand over my heart, I’ve never done it as neatly as whoever does it at the DT Swiss factory. This is compounded by the fact tubeless tyres can throw spoke tension out of whack because so much pressure is being applied to the bead. 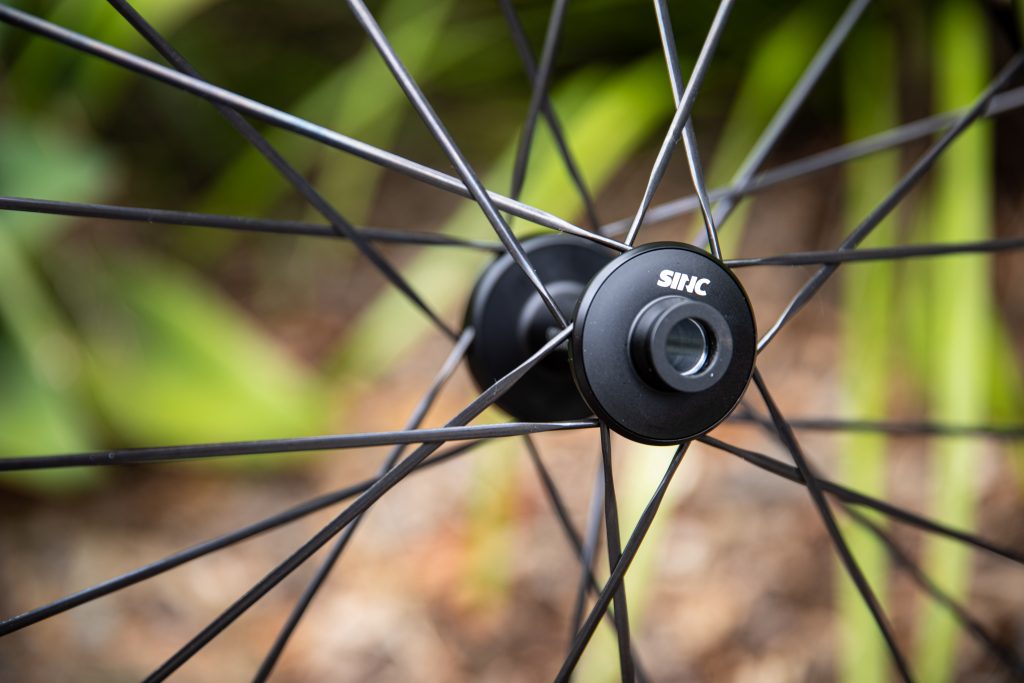 When you’re truing a wheel, you’re correcting for spoke tension imbalances, and because the spoke nipples aren’t readily accessible you have to estimate before you can tape the rim and seat the tyre. If you didn’t guess correctly, you wouldn’t know until you’ve seated a tubeless tyre, so you’ll have to start over. Given the tool- and headache-free maintenance provided by the hubs, a quandary of this nature is out of character for DT Swiss. In saying that, carbon wheels this deep are usually reliable in holding their shape and, once running straight, they’ll seldom require truing.

Overall, the DT Swiss ARC 1100 Dicut 50mm wheels are fantastic on the road. They cut through the wind without making a fuss regardless of the direction from which it’s blowing. Of course, we’re talking about bikes here, and there’s no such thing as a free lunch, so for these well-behaved carbon wheels you can expect to pay a pretty penny – the ARC 1100s are set to retail at $3,699 in the 50mm depth. That may make your eyes water, but it’s a price point at or below other premium wheels with identical marketing claims. The ARC 1100s should definitely be added to your wish list. They’re on mine. 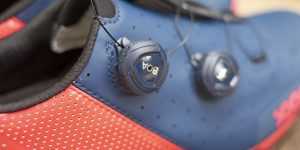