Rapha has designed its lace-ups from the ground up, and the Rapha Classic shoes see some novel features, but how do they stack up in a crowded field?

Since Giro introduced the Empire, lace-up shoes have seen quite a resurgence, with just about every brand offering an option that requires bunny ears and a double knot. While they don’t provide the same on the fly changeability as shoes with BOAs, ratchet straps or velcro, they offer additional adjustability points and the lack of mounting hardware allows for a more supple upper. Rapha has designed its Classic lace-ups from the ground up, and the shoes see some novel features, but how do they stack up in a crowded field? 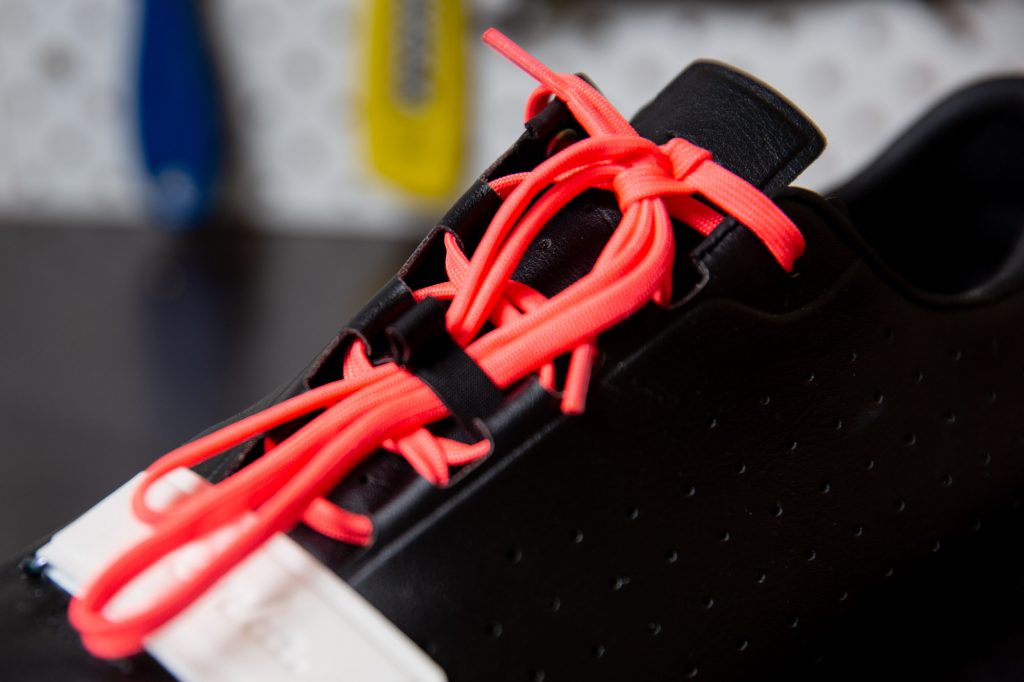 In the past, Rapha shoes have borrowed a Giro chassis, with the clothing brand adding its own flavour to the upper. The Rapha Classic Shoe, on the other hand, was designed entirely in-house in collaboration with riders like Lachlan Morton and Anna McLeod. 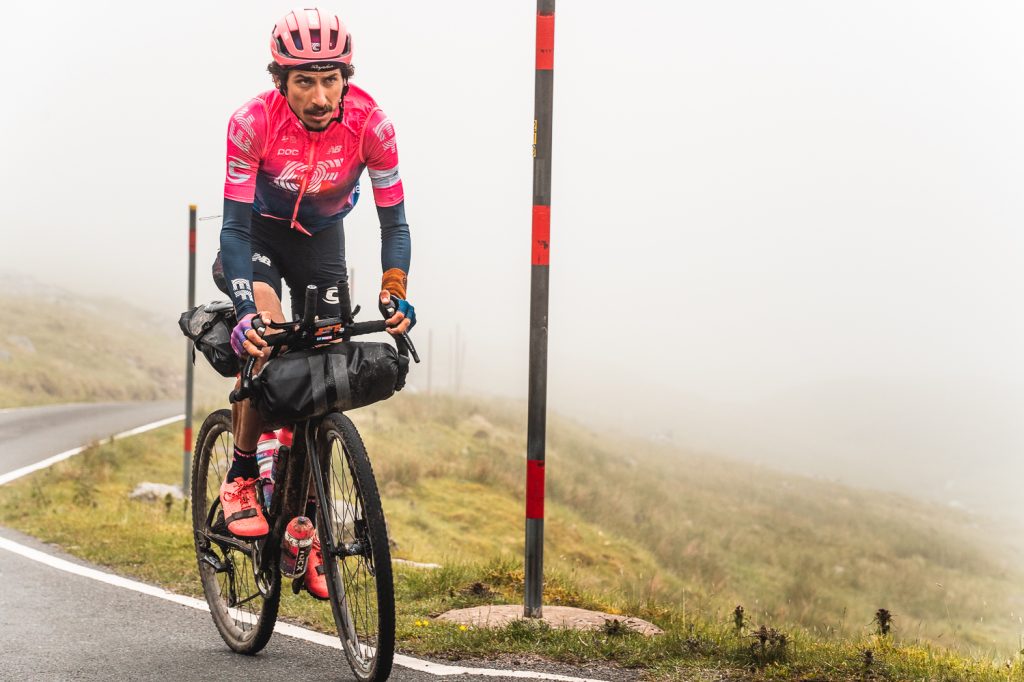 Starting with a full carbon fibre sole, Rapha has covered the majority of the plate with thermoplastic, not only for walking grip but also to protect the material underneath. Weight weenies will note this adds grams to the shoes which tipped our scales at 314g per shoe. In the long run, it’s going to add longevity because you’re not scuffing the carbon when you walk around or miss a pedal. The heel tread isn’t replaceable and we can only speculate on how it will last but if I had to take a stab, I think you’ll wear a hole in the side of the upper before the TUP wears through. It’s soft but durable. 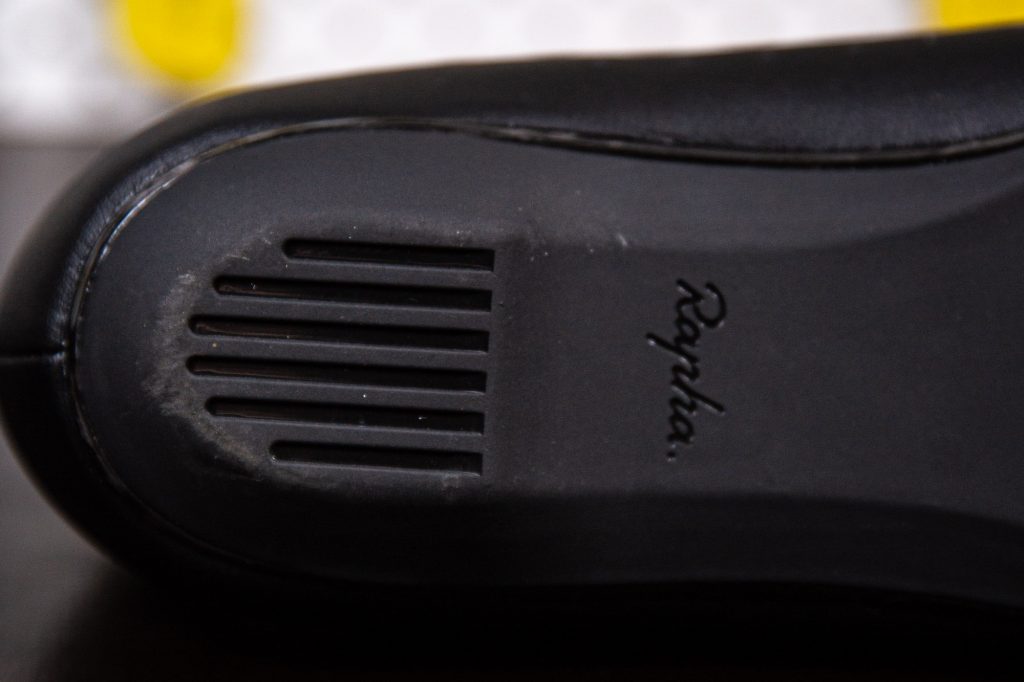 Rapha hasn’t given the Classic Shoes a stiffness rating, but they are well within the range of what you would expect from a high-end road shoe – I’d peg them somewhere between a Shimano RP9 and Giro Empire SLX. It’s worth noting the sole is still being supplied by Giro but to what level, we can only speculate. There are no watts lost when you put your foot on the gas pedal, but they are forgiving enough to take the sting out of vibrations from rough roads. 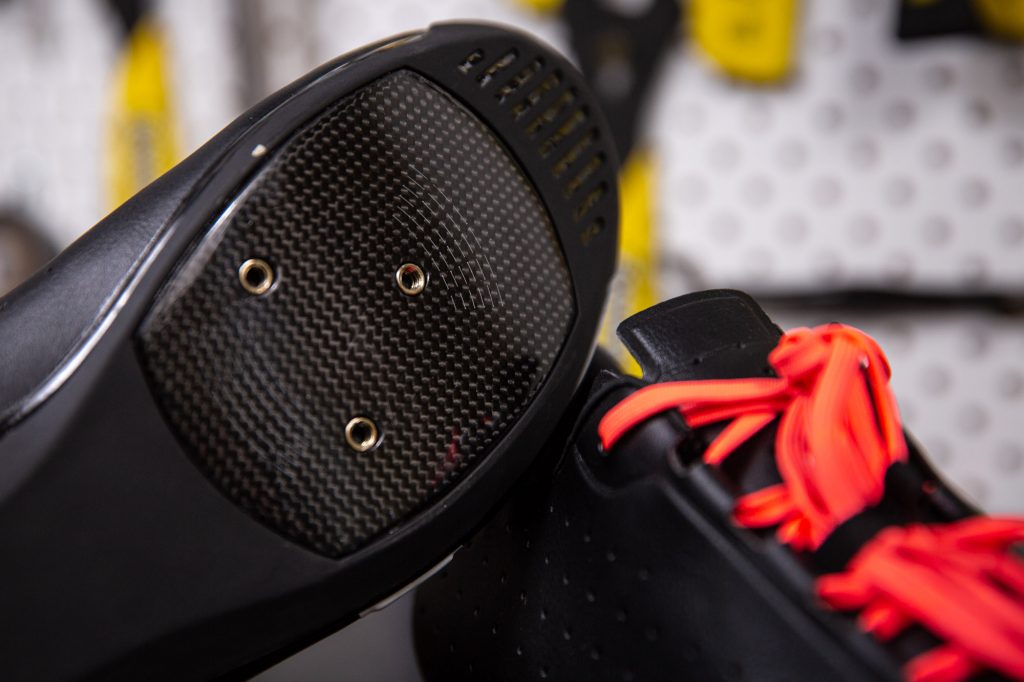 The upper is made from synthetic microfiber that looks and feels like leather, but breathes well and dries fast. With that, the upper is devoid of seams thanks largely to Rapha’s unique double wall lace system. Instead of poking holes in the upper and running laces through them, Rapha has doubled the material over and routed the laces through the fold. The brand says this setup makes for a stronger structure that more evenly distributes pressure across the bridge of your foot. 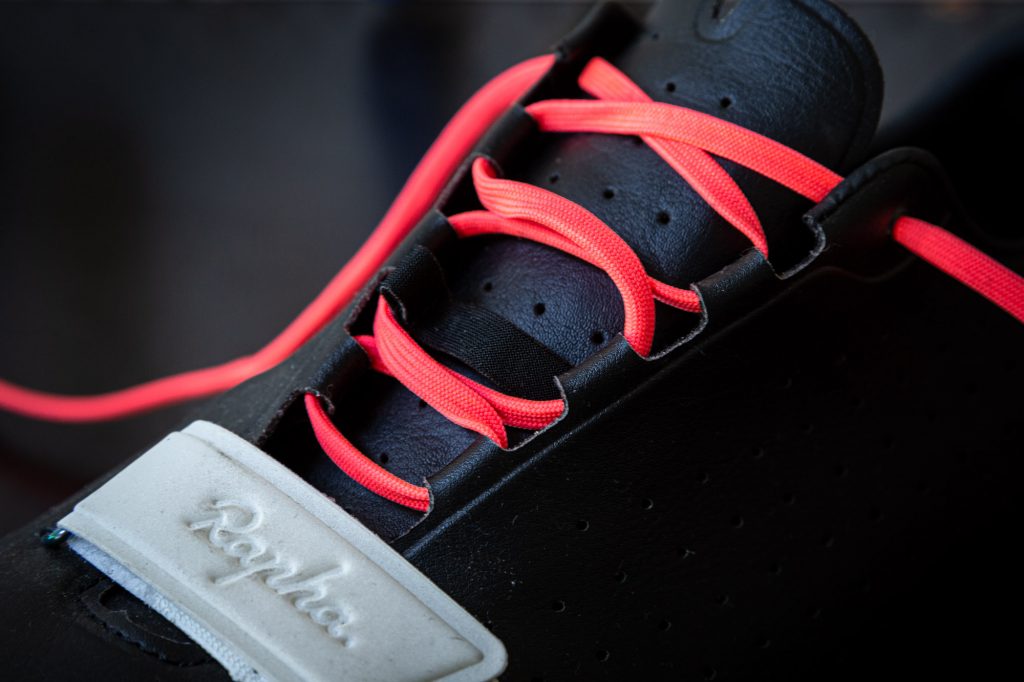 Up to this point I’ve never had an issue with pressure points anywhere with lace-up road shoes, however, the inner wall of the fabric swaddles your foot from underneath and provides adequate support, even without the arch wedges on the included insole; more on that later. With the laces offset slightly to the outside of the shoe it further helps the upper to wrap your foot rather than just squeeze it. 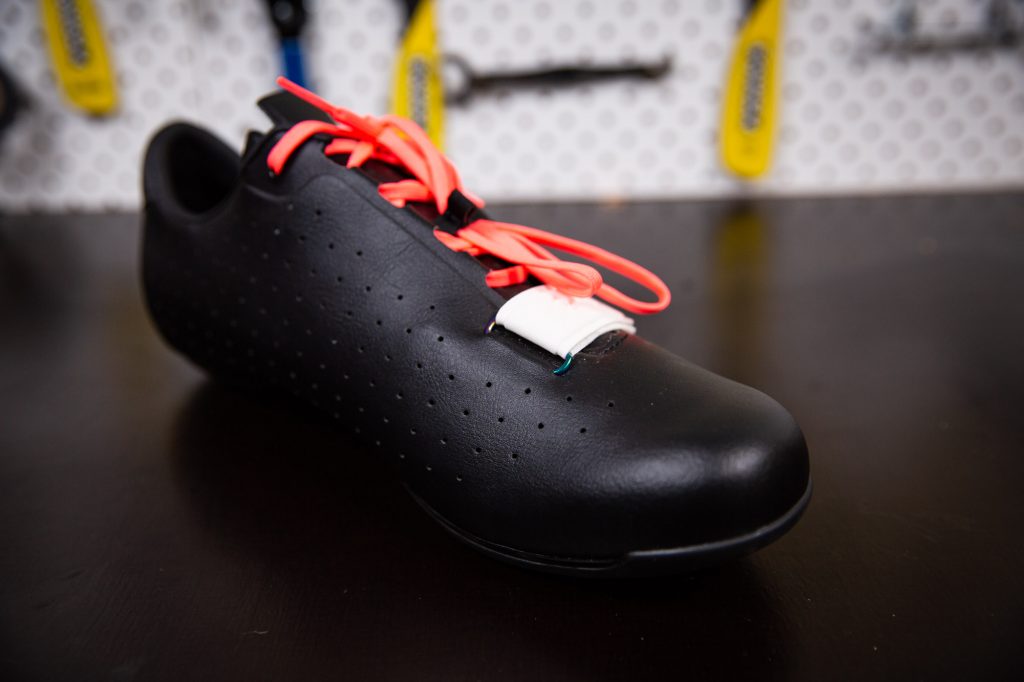 The laces on the Classic Shoes run more freely than they do on Giro’s Empire in any iteration or Bontrager’s Classic and need to be re-tensioned with each wear. The latter are set and forget, meaning once you get the forefoot dialled you only need to retention loosen the top two eyelets when you put them on or take them off, where the Rapha kicks take a bit of fiddling with each wear. This isn’t necessarily a bad thing, just different.

I’m always surprised how well shoes like this can vent, and even with the double layer of material across the majority of your foot, a decent amount of air makes its way through these kicks. That said, it’s currently winter, and at noon on a December day in Queensland, they are probably going to be warm.

Rapha say they’ve designed the Classics around a proprietary last, which is notably wider than most road shoes which are based around the Euro ‘dress shoe’ fit. A bit more room in the toe box means your little piggies aren’t squashed up against the sides, and there is room for your feet when they begin to swell after a few hours riding. My feet measure 105mm at the forefoot, and the width of the toe box felt bang on, though if this feels wide, there’s a reflective velcro cinch strap for added adjustability. 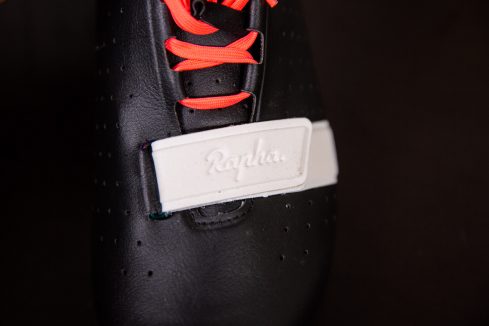 The included insoles aren’t throwaways either and come with interchangeable foam wedges for arch support – I settled on the high wedge.

At the back, the heel cup is deep, with what feels like a plastic between the layers of fabric for support and with a bit of padding around edge quashes any sign of heel lift. 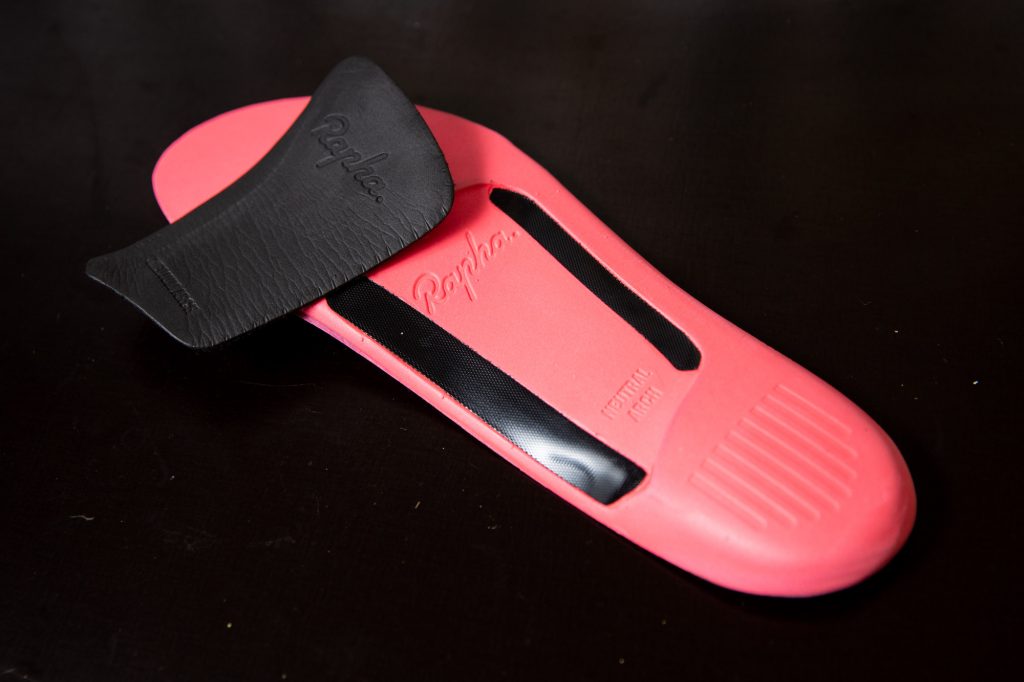 It’s clear Rapha had done its homework before designing these shoes, and we’d guess it took quite a few notes throughout the collaborations it did with Giro. Laces aren’t for everybody, and if you’re one to continually faff with your shoes over the course of a ride, the Classics, probably aren’t for you. 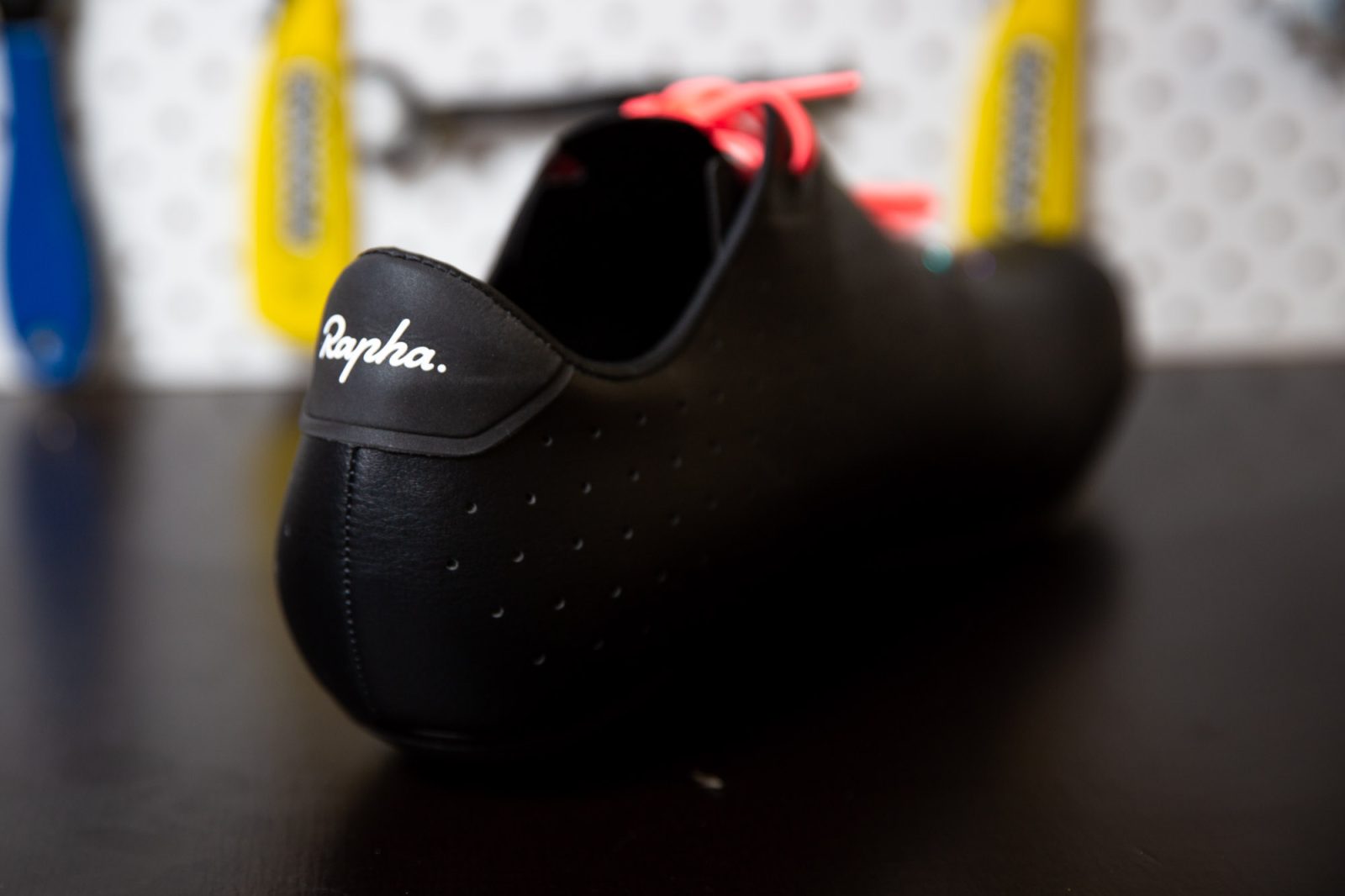 If I’m honest when I first saw the Classic shoes, I had written them off as another Empire copycat – especially given Rapha’s past relationship with Giro. However, now having ridden in them, my tune has completely changed, and the only place I can find fault is I wish the lace keeper on the tongue had a bit more stretch. The Classics are supremely comfortable and are more than stiff enough to serve Fondo riders and racers alike.

What is most surprising about these Rapha kicks is the price tag. It’s no secret most of Rapha’s gear commands a premium price tag, however retailing for $315 through the Rapha website, the Classic shoes are cheaper than other lace-ups Giro’s Empire SLX ($399) and ACC ($359) and the S-Works Sub6 ($400). 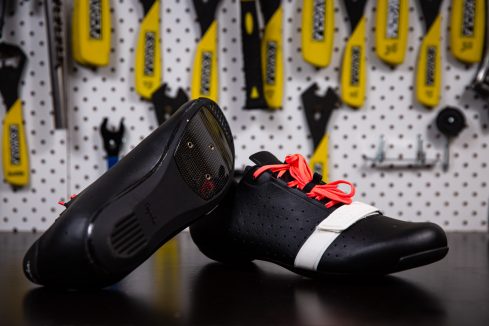 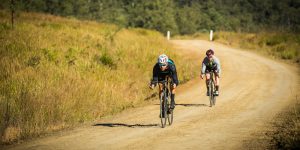 Available from all good newsstands, major airport and rail networks along with Target, Woo...