Gold Coast, Cradle Mountain, Falls Creek. The Peaks Challenge series will push any cyclist to the very limits of their ability. Here’s the skinny on what to expect from Peaks Challenge Gold Coast in 2016…

It starts locally. Suddenly a 100km ride isn’t massive. Then you break 2,000 metres of vertical gain in a ride. It’s all part of that push. To find the edge. To see how close you can push the body to it. And if one Peaks Challenge wasn’t enough to find where that edge is for you, Bicycle Network has the solution. Already run as three events in 2015, this year sees Gold Coast and Cradle Mountain and the 2017 Falls Creek forming a challenge series of such masochistic beauty that, if you’ve read this far, I know you’ll want to be one of the incredible few to complete it.

With the first Challenge, Gold Coast, kicking off August 14 (early bird entries close 30 June), don’t be thinking it’s too late. Two solid months of preparation is plenty. And if Esteban Chaves and Orica-GreenEdge having a stunning Giro d’Italia isn’t inspiration enough, some Queensland wintertime warmth is enough to get me over the line. Just remember to use the lead up to not only get the legs in shape, but the bike too. The Gold Coast climbs benefit from a semi-compact or compact chainset paired with an 11 or 12-28. Cradle Mountain you can get away with standard 53/39 chainrings. However after going up the Falls back climb with standard 53-39 Q-Rings I also recommend (if you value your knees) compact or semi-compact chainrings a little smaller for Falls Creek Peaks. 60 RPM got a little painful after about four of the 10km… To help with training I’ve included my different suggestions for preparing. All that remains is entering. Normally I’d add something about convincing the significant other about the time away, only the beauty of these event locations is they’re simply terrific parts of Australia to spend time in anyway. A family holiday? Easy sell. Commit. Make it happen. And I’ll see you out there

The course Deceptively, Aussies think of beautiful beaches, theme parks and gift shops with ‘I love Australia’ toy kangaroos whenever we hear ‘Gold Coast’. But head just a little inland and you’ll find enough climbing to quickly change that perception. Clocking up the same vertical gain as Falls Creek, this Challenge’s climbs are numerous and fierce. Gradients over 20% are not uncommon. The final major climb, Tomewin, averages 7.9% but feels like more. Especially as you’ll have nearly 200km in your legs by the time you reach it.

It’s not an easy run home from the top either, with pinches all along the closing 35km. The ‘Liege-Bastogne-Liege’ of the series, what Gold Coast lacks in enormously long climbs it makes up for in relentless undulations.

Flights to the Gold Coast run from all major cities in Australia, though if you can nab a significantly cheaper flight to Brisbane, it’s only an hour-and-a-bit drive from there.

That part about the Gold Coast being close to the beaches comes in handy when it comes to accommodation. You can stay anywhere along Surfers Paradise, as the new start (at CBUS Super Stadium, in Robina) is only 10km or so away. It leaves you the option of a warm-up ride to the start and a lazy late afternoon soak of the legs in the ocean after you’re all done. 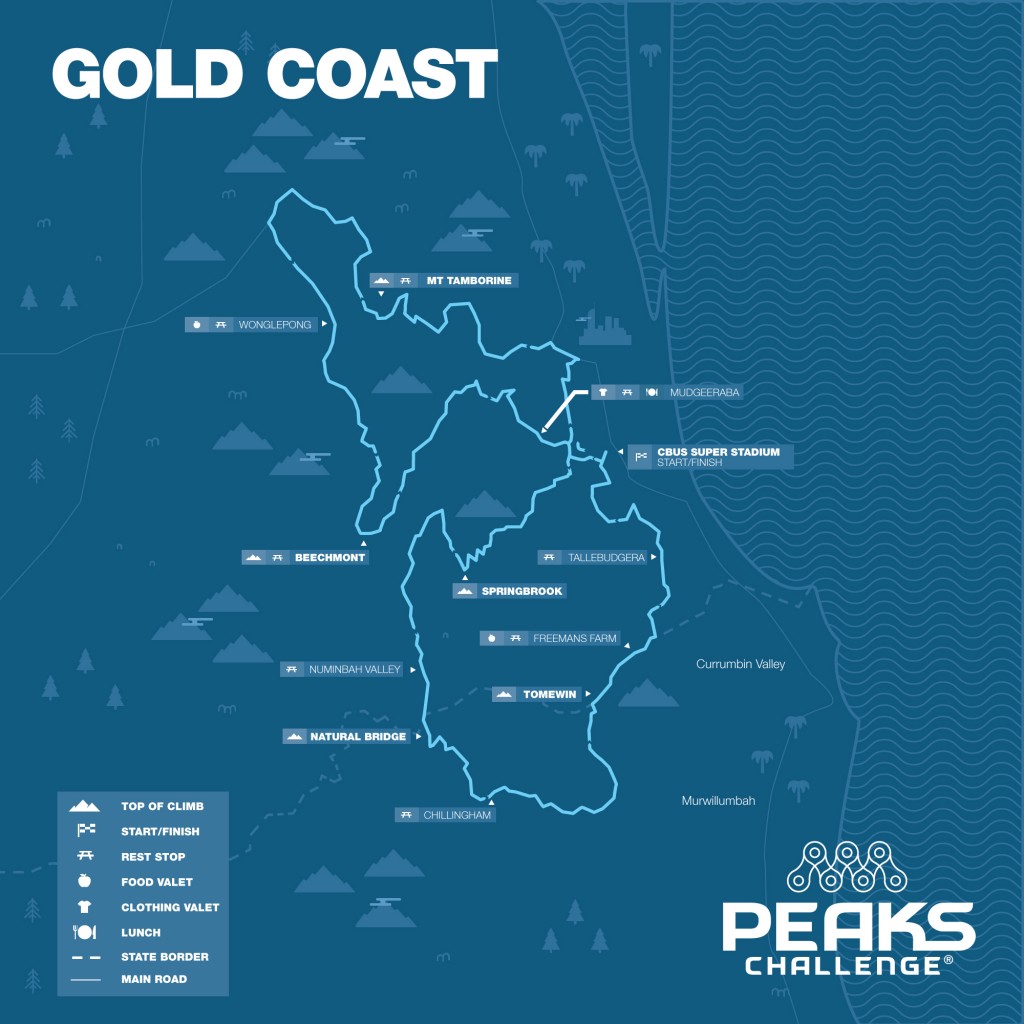 Get the scoop on Peaks Challenge Cradle Mountain.

Win a pair of Bont shoes!

We've teamed up with Bont to launch their mybonts program