The ANGi Crash Sensor from Specialized pairs to the Specialized Ride App for iOS or Android devices and calls for help when you need it most. Cyclist unpacks the unit for a closer look at the device now compatible with most helmets.

About this time last year, I was out for a mountain bike ride on a trail I’d ridden hundreds if not thousands of times. I knew which trail features were rollable, which ones weren’t and those that continue to give me trouble no matter how many different lines I try.

It was on this fateful day that a questionable-looking log finally gave way. The decomposing log collapsed under my front wheel and hit my eject button. I went over the handlebars and despite my best cat impression, my right foot landed on a root and I rolled my ankle. I wasn’t good. I hadn’t hit my head, nor winded myself but my ankle wasn’t caput. I was confident it was only a sprain but it didn’t matter, I was stranded.

In this particular area of the Gold Coast, mobile reception is spotty. Of course, I had crashed in a dead spot and I was by myself bur lucky for me, I was able to cautiously roll to the trailhead and call for help. It could have been much worse. What if I’d broken my leg or knocked myself unconscious in the process? How long would it have been before someone found me?

An unfortunate part of riding bikes, on the road or trail, is you are going to crash. It’s not a if but rather, when. The trouble is, you never know when your number is going to come up. Will you tip over and donate some skin to a corner or will you hit some gravel at speed and sustain a severe injury that leaves you in a poor state? Will someone be there to administer first aid or call paramedics, or will you be found hours later by another road or trail user?

The Specialized ANGi crash sensor aims to serve as an overwatch of sorts, calling for help with you can’t. 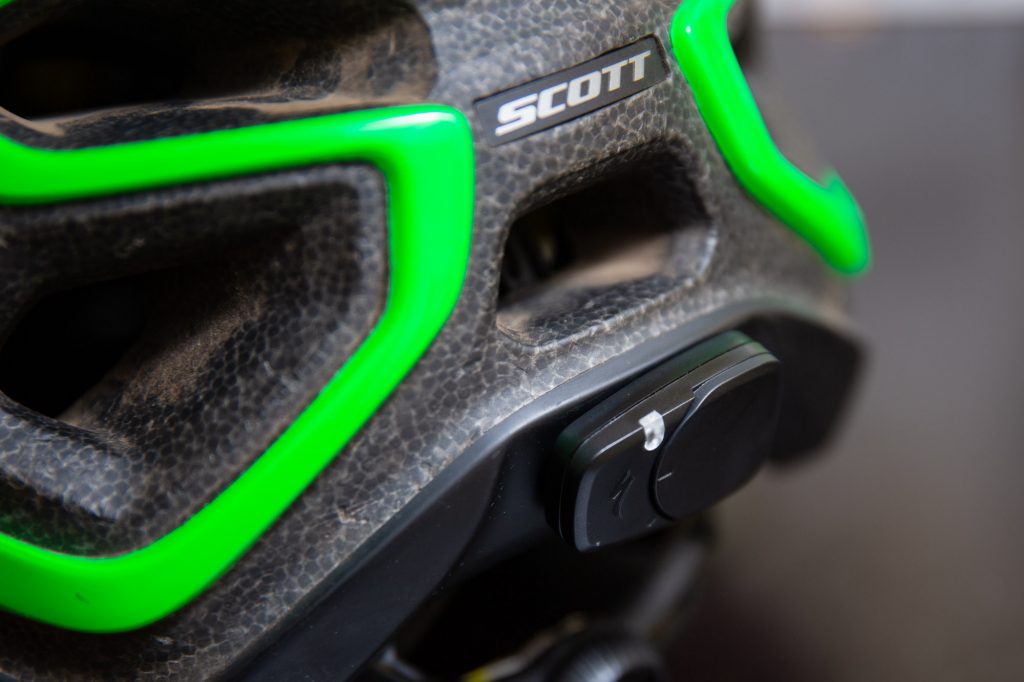 ANGi, short for angular and g-force indicator, is a small pod that mounts onto the back of your helmet, and if it detects an impact, the sensor triggers an alarm on your phone. If you are unable to turn it off in a predetermined interval, ANGi sends a text to an emergency contact with your GPS information. You can also set a ride time alert which will send a message if you haven’t ended your ride in a predetermined time interval.

If this is all sounding a bit familiar to an existing product, the ICEdot; that’s because Specialized quietly acquired the company last year. 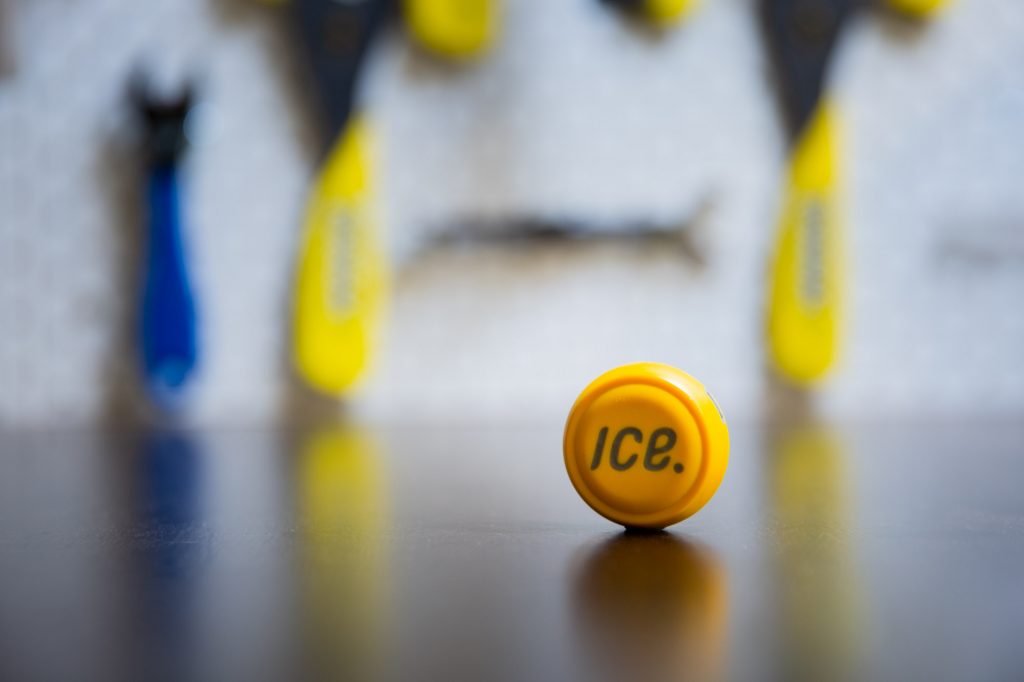 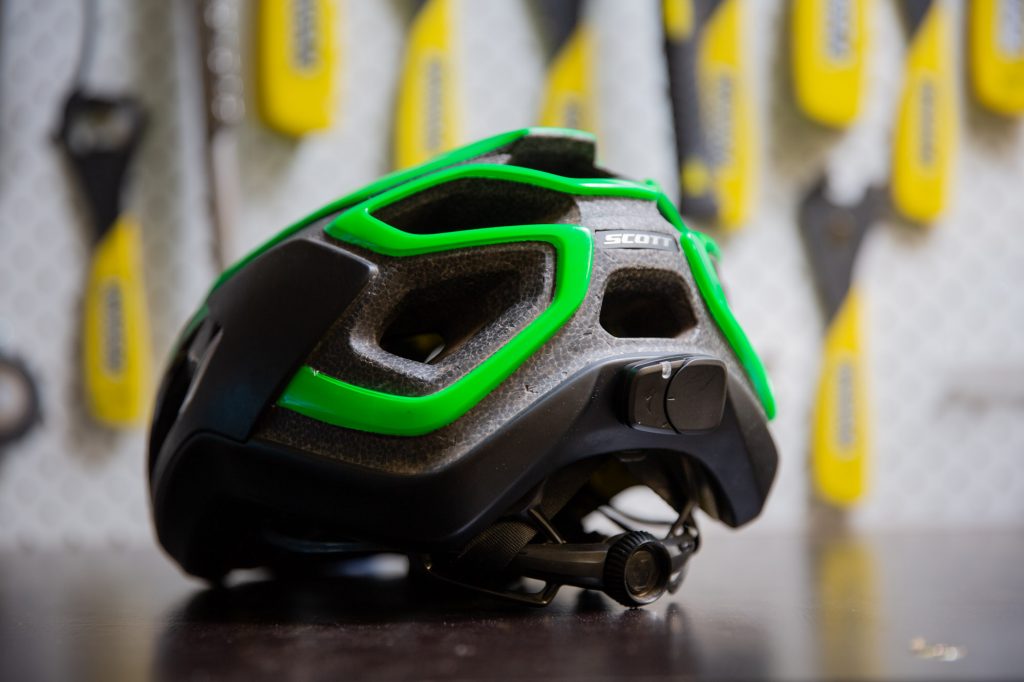 But, the brand hasn’t just slapped a big red S on the ICEdot; Specialized has completely overhauled the unit. Tipping our scales at just 10g, it’s 5g lighter than the ICEdot and has swapped from a rechargeable battery to the common CR2032 coin cell battery – claimed to give you about six months of battery life. Specialized has also added an accelerometer to the equation – an essential caveat as rotational forces are at the root of concussion and the elephant that helmet brands are currently trying to tame.

The sensor itself utilises 3M adhesive tape for mounting, meaning it can’t be easily transferred from helmet to helmet; even if you’ve got one of the new Specialized lids complete with the ANGi mounting plate. In all honesty this is disappointing; I know I’m not the only person who uses a road and trail helmet so for the many like me you’d have to buy two. If you do go ass over tea kettle and crack your helmet, it also means you’ll be replacing the ANGi.

I asked Nate Teh, Specialized Australia’s Ride Care Manager about the best practice for mounting the sensor to a non-Specialized branded helmet and he said to this point they’ve only tested the ANGi with Specialized helmets.

“It’s physically possible to attach the ANGi device to any flat, clean and smooth surface that the tape will stick to. However, we can only recommend at this stage to attach the device to Specialized helmets, as this is what the device has been designed and tested on so far.

That’s not to mean that this device won’t work with any other brand of helmet – it just means we can’t confirm yet if the ANGi device will stay attached for as long as you’d expect or that the helmet’s safety won’t be affected by attaching the device to the helmet.”

That discussion was in April (2019) but there’s been a significant update since my original review.

Lucky for you dear reader, I did not have a Specialized helmet on hand to test the ANGi with, so it went on the back of a Scott Centric. After plenty of road time and a bit of mountain biking too, it’s still right where I stuck it.

The genius of these little sensors is your phone does most of the heavy lifting, relying on your device not only to interpret the information the sensor is sending, but also for the GPS ping. This means it doesn’t need to be overly complicated nor is the load on the battery all that big. The downside is the sensor relies on your phone to do the heavy lifting, which is shouldered by the battery on your phone.

There’s an App for that

Interfacing with the shiny new Specialized Ride app, pairing the sensor via Bluetooth is painless. Rather than maintaining a constant connection to your phone, instead, ANGi connects itself at the start of a ride when activated, then disconnects and checks in periodically.

To use the sensor, you have to start a ride – think Strava App – for the ANGi to begin monitoring. There’s no on or off switch, just shake the device, hit go and you’re off. 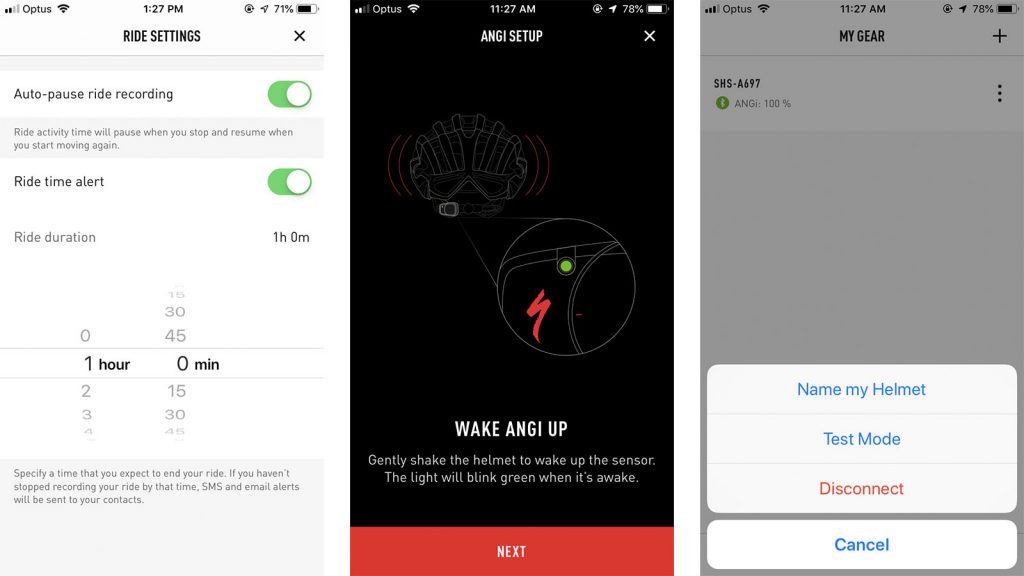 All up, using the App to record a ride and connect to the ANGi used about five percent of my iPhone 8 battery per hour having started from a full charge.

As you’d expect during my testing period, there were no false positives, and the ANGi remained all but invisible while stuck to the back of my helmet. In the interest of thoroughly testing the device, I even came into a loose off-camber corner on my MTB a little too hot, lost my front wheel and proved how hard packed the trail was with my hip and shoulder, totally on purpose – you know for the sake of a meticulous review. I’m happy to report that I was unable to trick the sensor into going off. 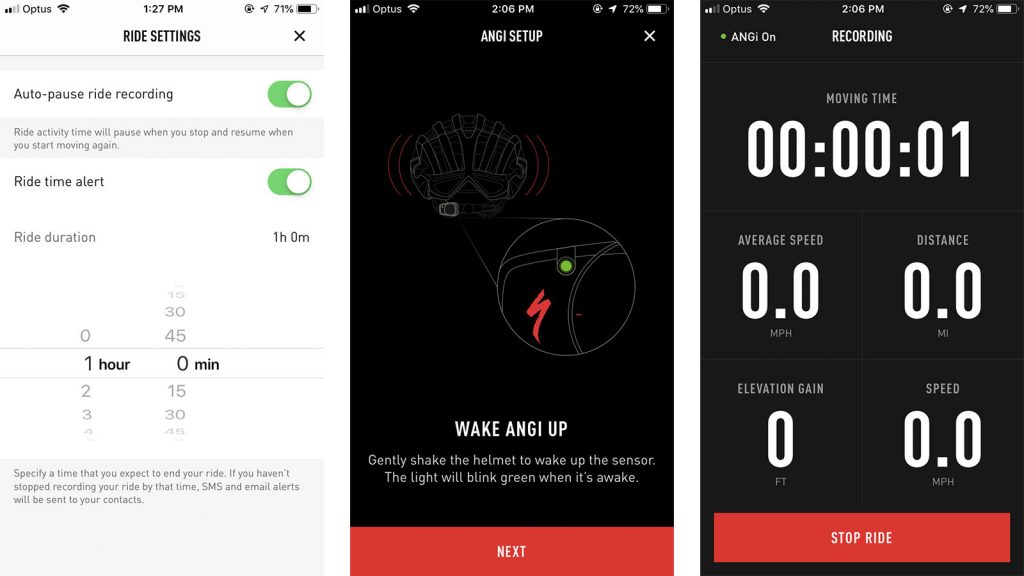 Specialized isn’t aiming to take an even bigger chip out of your ego when you tip over at a set of traffic lights or overcook a corner by turning your phone into a foghorn. Instead the ANGi is looking for the substantial linear and rotational forces that cause your brain to slosh around inside your skull and may leave you unable to help yourself.

If you do manage to trigger the sensor, your phone goes off like a siren, and the countdown begins on the screen. The reasoning behind this is three-fold; to potentially rouse you if you have been K.O.’d, to get the attention of any passer-by who might be able to help, and to prevent a message being sent out to loved ones that you’ve had a nasty crash, when in fact you’ve just dropped your helmet at your coffee stop. 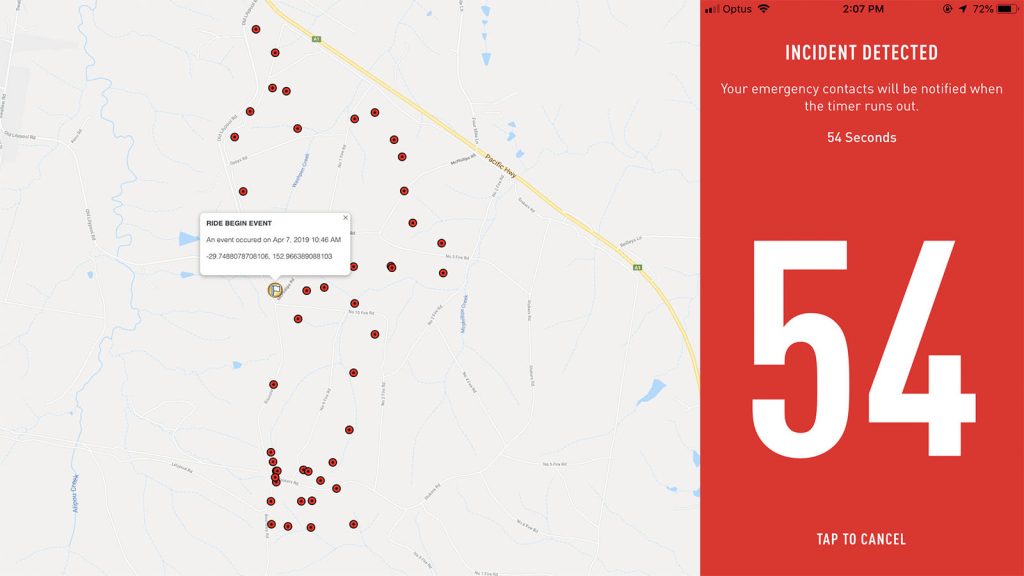 The alarm by default goes for 15 seconds but can be set to go as long as 90 seconds. If you don’t turn it off in time, a text message is sent out a predefined emergency contact letting them know there has been an incident and includes a link with a pin on your location.

This, of course, is limited to an area with mobile service; however, that’s where the option to set a ride time alert comes in handy. If you haven’t ended your ride in the Ride App within the allotted time, it sends similar geotagged alert to your emergency contact, so they have a better shot of finding you should things go pear-shaped.

The App itself is streamlined and intuitive, and beyond just tracking your ride and interfacing with the ANGi, there is also a ‘Nearby Rides’ section. While it’s still quite new, if this takes off, it will be an awesome feature if you’re new to an area for or just passing through and want to go out for a spin.

My only real complaint with the Ride App and ANGi system is that to use the sensor you’ve got to record the ride on your phone, using GPS the whole time and draining the battery. On every ride, like most riders these days I’ve got a dedicated head unit attached to my handlebars and so tracking on my phone is a little redundant. The luxury of the ICEdot was it only tapped your phone’s battery if it triggered an alert. However, the trail of breadcrumbs the ANGi leaves would seriously speed up a medivac.

From 21 May Specialized has officially dropped the previous subscription model – necessary to utilise the ANGi App to full capacity.

“Each ANGi equipped helmet or ANGi Sensor comes with an activation code with initial purchase. Download the free RIDE App, set up an account and activate with the code. That’s it for the life of the ANGi unit.”

Given the folks at Garmin offer this feature for free with some of its computers, the ANGi now finds itself in a position to properly compete. It’s also worth noting, the Garmin crash detection isn’t great and can be triggered by riding over a curb or rough pavement.

The original subscription model was, as I can only imagine, due to the fact Apple doesn’t allow third-party Apps to send messages from your phone; so it’s got to come from Specialized. For Specialized to not only send out the SMS but also maintain servers and continue to update the app costs money – hence the (previous) fee. Now that’s been dropped, it seems Specialized will absorb these costs themselves – which kind of makes me feel a little warm inside.

Overall I am a fan of the ANGi, having a crash sensor attached to the back of my head gives me a bit of peace of mind and I know it makes my loved ones feel quite a bit better too. My only real hang up is needing to have your phone running your entire ride if you want to use the unit.

Keen to get a closer look at the ANGi Crash Sensor? Subscribe to Cyclist and you’ll receive the coming six issue plus the ANGi device for just $109. 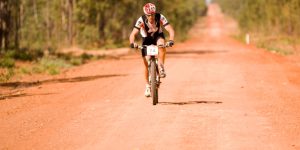 Racing through the far north of Australia on dirt tracks appears daunting, but we’re set...