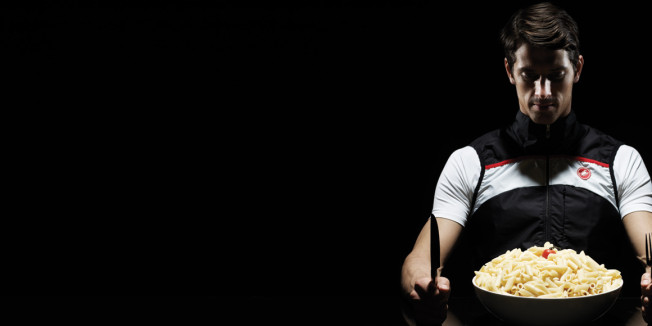 Pasta for breakfast, pasta for lunch, pasta for dinner (with a side order of pasta)…that’s pro way, right? Er, wrong.

Ask most people what they think a cyclist eats and the first thing they say will probably be pasta. Second will be potatoes, and the third? More pasta. Or maybe pasta with potatoes. In the public consciousness at least, those boys in Lycra sure love their starchy carbohydrates. This perceived obsession with carbs comes from the fact they’re one of the most quickly digested forms of energy from a food source, transformed in the body into glycogen that’s then stored in muscle tissue and the liver. So it should stand to reason that the more carbohydrates you eat, the more energy you have. Not so.

‘The human body can only store a limited amount of glycogen – roughly 90 minutes’ worth, depending on the intensity of the exercise,’ says nutritionist and sports scientist Drew Price. So you have to ensure you keep your stores topped up before any type of endurance event, a process known as carb loading.

But the fact is, most pro-riders don’t spend their time off the bike necking huge bowls of pasta. ‘An elite rider can do a 90-plus mile race without even thinking about extra carbs,’ says Mayur Ranchordas, head of nutrition at Sheffield Hallam University and nutritionist for Rapha Condor Sharp. ‘Once a rider has got a few hundred thousand miles in their legs, their physiology changes and their body becomes efficient at using fat for fuel. If they overloaded on carbs, they’d just put on weight.’ However, recreational riders who do a bit of training in the week and the odd sportive at the weekend will need to up their intake because their bodies aren’t so efficient. 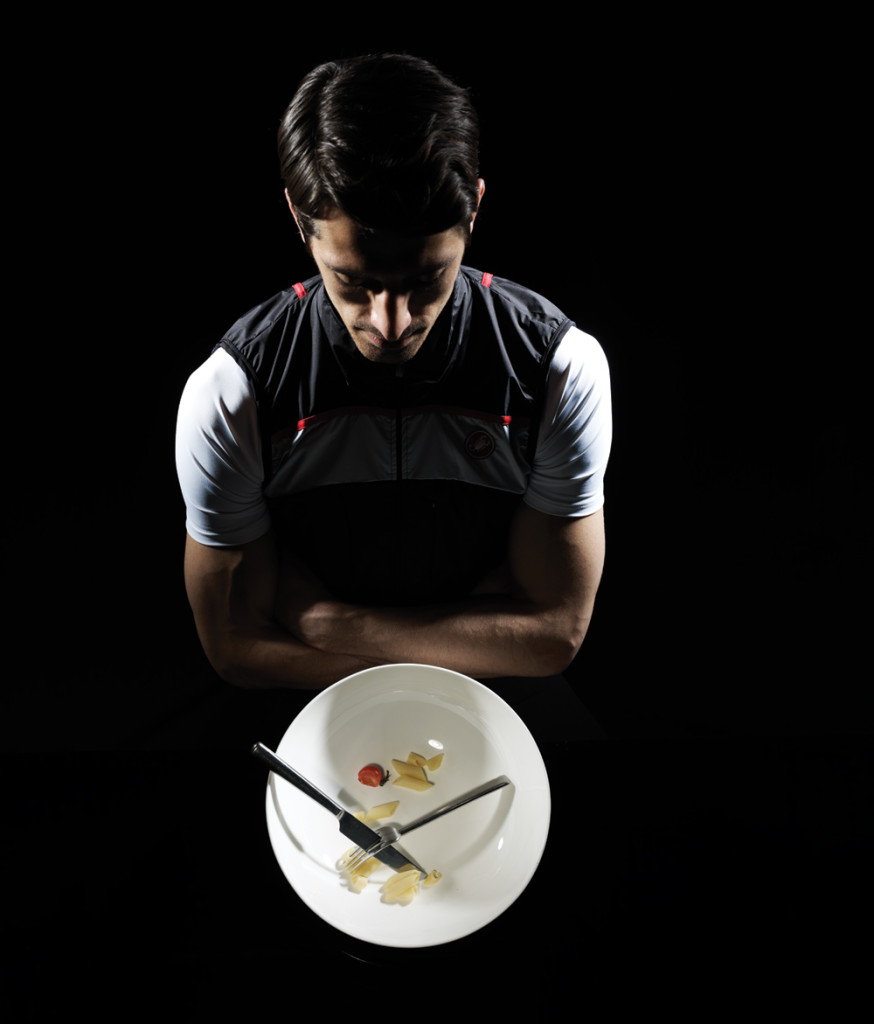 But hold the Dolmio! You don’t have to start consuming your own bodyweight in fusilli just yet. In fact, if you get your nutrition right on the days when you’re not riding, eating for the days you do should simply be an extension of your normal diet.

‘After a long period on the bike, the body’s glycogen levels become depleted,’ says Chris Easton, senior lecturer in exercise physiology at Kingston University. ‘But “refueling” goes beyond simply eating carbs. High-intensity exercise causes damage to the muscles, which need repairing with macronutrients.’

‘All endurance athletes need a balanced diet,’ says Price. ‘And that’s especially true of cyclists. Because of the intensity and duration of training, a high concentration of essential fats and quality protein are required. These two elements will aid recovery and ensure the body is getting all the vitamins and minerals it needs.’ Long-distance events and the training volume required to prepare for them hit the body hard and can affect the immune system, leaving riders open to illness. Not what you need if you’re working towards a big race.

So what does all this actually mean at the dinner table? ‘The first rule of improving performance is to up healthy eating,’ says Price. ‘A basic rule of thumb is to divide your plate into three. One third should be carbs that are low on the Glycaemic Index [GI] such as sweet potato or basmati rice. Another should be made up of different types of vegetables, and the rest lean protein, preferably from something with a face. This creates a framework on which to base every meal.’

Looking to the pro-riders gives you an indication as to how this works. ‘My nutrition both on and off season is pretty similar,’ says Felix English, rider for Rapha Condor Sharp. ‘Cycling is an 11-month commitment for me: four months’ training, seven months’ racing. To handle the long training hours, I have to eat just as well in the off-season as I do when I’m racing. I’ll have the odd thing here and there – maybe a bag of sweets after a really tough stage in the middle of a tour or a pizza after finishing a hard block of training.’

‘We’re quite strategic with the Rapha guys,’ says Ranchordas. ‘If we have a rider who wants to lose weight but needs to maintain a training schedule, we’ll look at when they eat their carbs. They can have some straight after training, which is when the body needs them most, but in the evening we’ll cut back, adding extra vegetables so they don’t go hungry. The result will be a reduction in body fat while still restocking their energy stores. On a non-training day, we’ll simply reduce their portion sizes. We’re basically matching fuel to energy expenditure.’

Keeping an eye on what you eat seems to take the joy out of one of the main benefits of spending a lot of time on a bike: the enormous amount of calories you burn. ‘Any longer than three hours on the bike will burn between 3,000 and 4,000 calories,’ says Ranchordas. So surely you can reward yourself by eating whatever you want afterwards? Apparently not.

‘You may burn a lot of calories when you’re on the bike but your food choices should still be healthy,’ says Gareth Nicholas, product and education specialist at Maximuscle. So although visualising a huge Sunday roast may have got you through those last few miles, eating that amount of food in one go is the last thing your overworked body needs post-ride. ‘Imagine your body is a warehouse,’ says Nicholas. ‘If one lorry comes along, the guys on the pallet trucks can unload it quickly and make sure everything goes in the right place. If several lorries turn up at the same time, the warehouse will be overloaded and some pallets will be put away but others will be left to one side. It’s the same with food. Overload the body and some of the food will be processed but the rest will be stored elsewhere, mainly as fat.’

In instances of continuous long rides, such as a tour or multiple training sessions, it can be hard to balance the deficit. ‘Calorie replacement is vital, especially if you don’t want to lose too much weight,’ says Easton. ‘Logistically, it becomes very difficult to try to get that much food down if you’re riding regularly, which is where supplementation comes in. Tour de France riders are famous for the intravenous replacement of calories because they simply can’t eat enough. For the enthusiastic amateur, there are products out there high in calories that have optimum carb/protein ratios. For example, a protein shake up to 15 minutes after training will give your body everything it needs to repair itself at a time when it’s most receptive.’

You are what you don’t eat

As we’ve established, carbs are essential for those of us who don’t feel the need to shave our legs every week, but too many carbs can be detrimental. So what’s the trick? Ranchordas believes that what he calls passive carb loading could be beneficial for such weekend warriors. ‘If you’re doing a sportive that’s longer than three hours, it will help,’ he says. ‘If the race is on a Sunday, you obviously won’t be doing too much riding in the lead up because you’ll be resting your legs and won’t be depleting too much energy. So on the Friday before, increase your carb intake gradually throughout the day. For example, if at breakfast you normally have two Weetabix and some milk, add a banana and a glass of orange juice. For lunch, if you have a sandwich, have another half plus a cereal bar. For dinner, have two-and-a-half fistfuls of rice instead of one and do a similar thing on the Saturday. On the day of the race – and this is where a lot of people go wrong – just have a small, balanced breakfast. At this stage, all you need to do is top up your liver glycogen and blood glucose. Don’t have too much or you may regret it.’

English agrees: ‘I have to watch that I don’t eat too much too close to the morning before the start of a race. Sometimes I’ll worry that my breakfast wasn’t sufficient and will panic eat, trying to cram down bars and gels,
but I think this has hindered my performance in the past. I also went through a stage of getting up early before races and having pasta for breakfast. Thankfully, those days are long gone.’

And if all this talk of carb loading and protein ratios has complicated matters, you could always do what some pros do and not eat anything at all. ‘You can train the body to be more economical with its fuel by training in a fasted state,’ says Ranchordas. ‘Each cell in your body contains mitochondria, which help create energy. The more plentiful your mitochondria are, the more economical and better at endurance you become. Training on empty enhances this process at a cellular level.’ Still with us?

‘Train first thing in the morning without breakfast – pros call this an empty ride – and maybe take some caffeine to help release fatty acids into your bloodstream, which in the absence of any carbs your body will turn to for fuel,’ he adds. One morning ride a week should reap some of the benefits and also trim that middle if the bib shorts are feeling a bit tight.

If you’re serious about your riding, staying healthy – and occasionally hungry – is the recipe for more speed.

Rules to ignore if you want to eat right 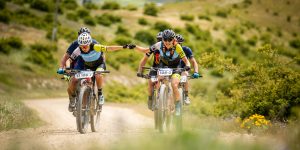