Just when we thought road bikes couldn’t get any lighter, Trek manages to shave off a few more grams

Trek already has two race-winning road bikes in its line-up – the aero-tuned Madone and the cobble-slaying Domane – so when the Wisconsin-based company announced it was launching a completely new road platform, it was hard to fathom where it might go next. In the end it chose to take on one of the oldest and fiercest battles in bike building – simply to be the lightest. 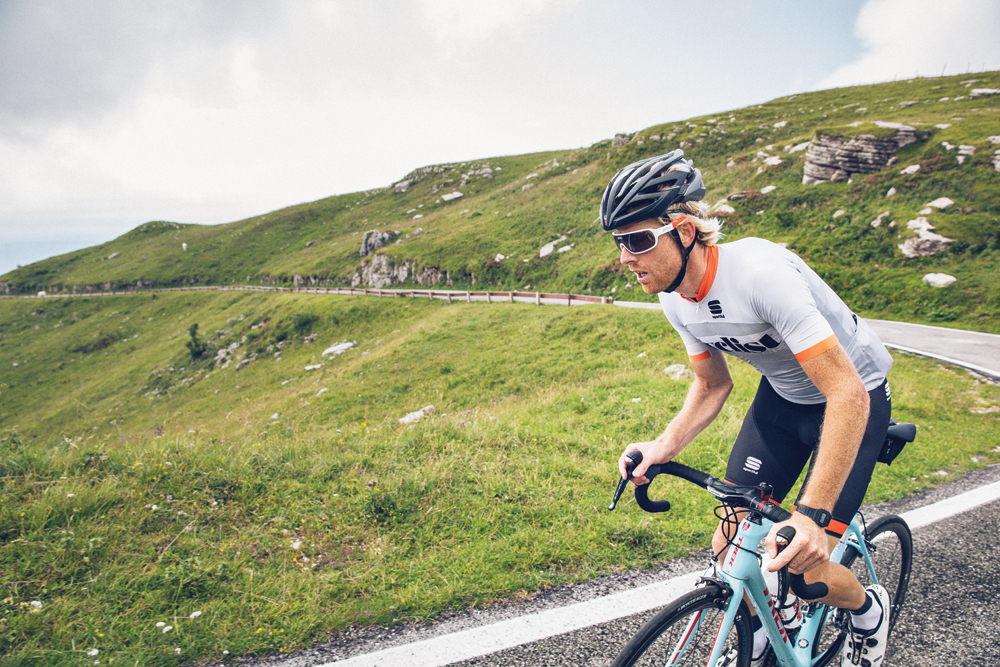 The goal for the engineers was straightforward – elevate Trek to the top of the weight race with the lightest production road bike in the world (and then create another bike name using the same six letters as the Madone and Domane).

It’s important to make a distinction here between lightest ‘frame’ and lightest ‘production bike’. The Émonda frame has a claimed weight of 690g for a painted 56cm, so can’t lay claim to being the skimpiest out there (although it’s not far off). However, what Trek has done is taken a holistic approach to the entire build, to arrive at a staggering 4.6kg complete bike weight for its range-topping SLR 10 model, enough to crown it as the lightest production model on the planet. 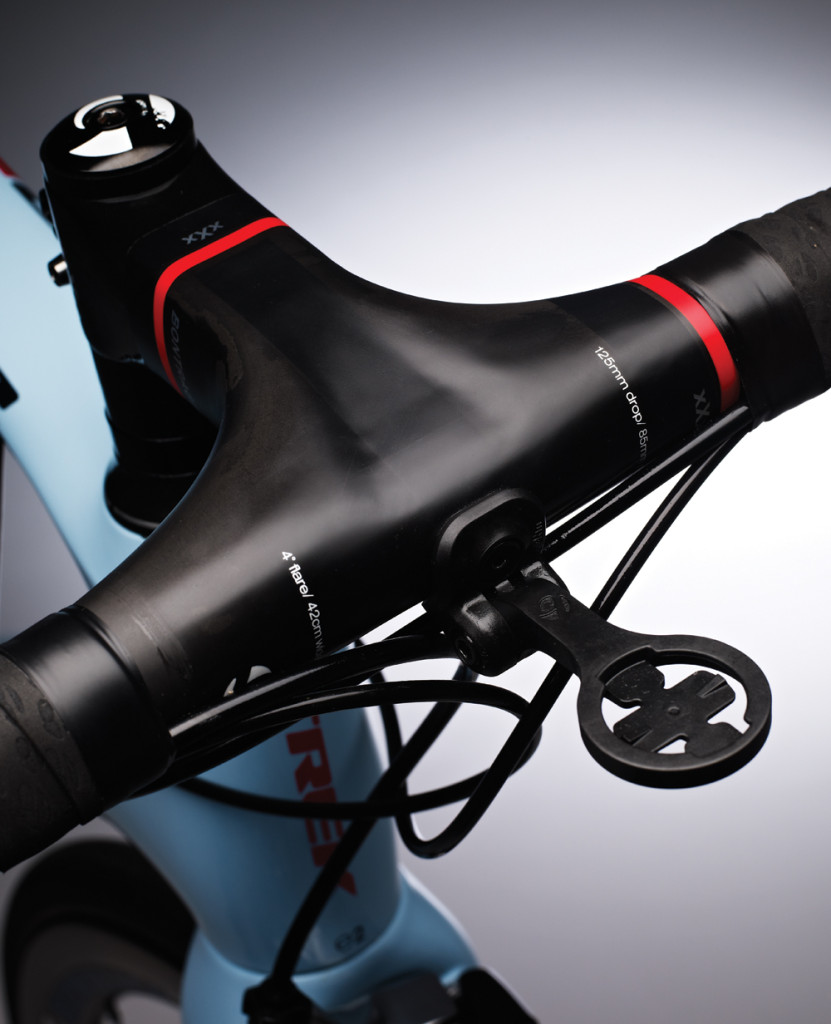 You could argue that’s a slightly hollow victory, because at this price point – the SLR 10 costs $15,999 – who goes for ‘production’ anyway? And as soon
as you start thinking outside the box for spec choices, the weight can soon come off practically any production bike. But, as they say, a win’s a win. What’s crucial, however, is that Trek has done more than just make one superlight flagship. It has created an entire range, using the same exhaustive approach to each model to achieve ‘best in class’ weight and specification at every level. 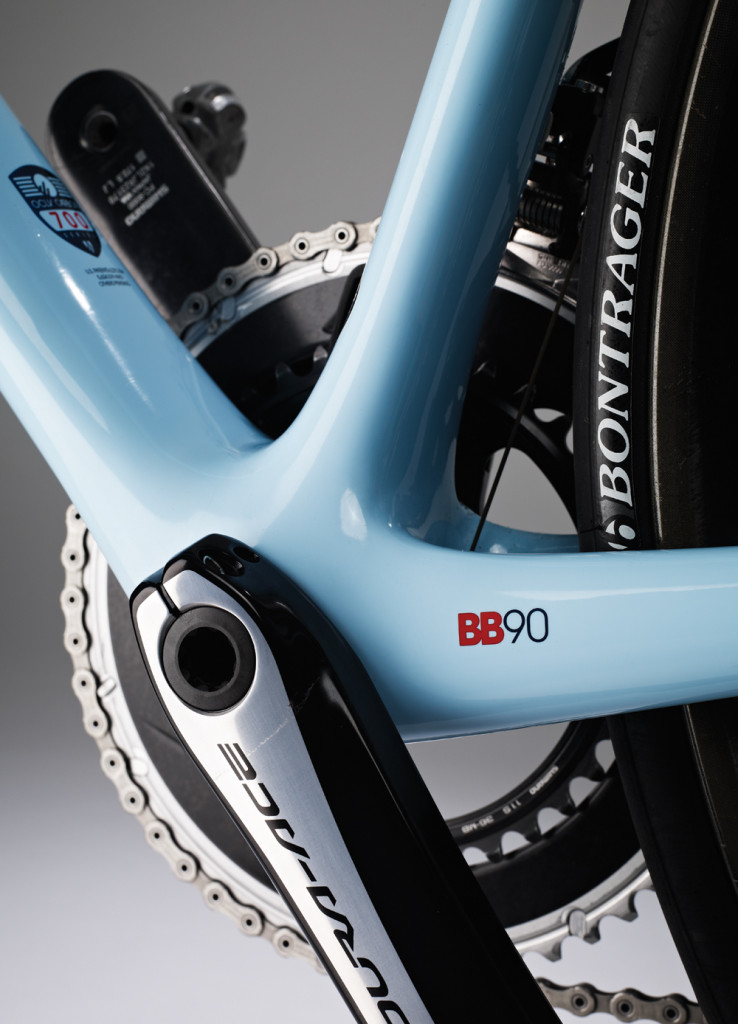 It graced our scales at 6.2kg, more than half a kilo under the allowable weight limit for pro bikes. ‘All you have to do is pick it up to understand what [the Émonda concept] is about,’ says Trek’s road product manager Ben Coates. ‘For the consumer, weight is very quantifiable, both when you lift it and when you ride it. Everyone wants lightweight. The person who spends $2,000 wants lightweight, just like the guy that spends $15,000. The benefits are there across the board. It is a quantifiable benefit that every [level of] rider will appreciate.’

Crucially though, Coates adds, ‘Superlight only plays when it rides super great.’ Which sounds like our cue to take the Émonda for a spin.

I have to agree with Coates. A lighter bike (assuming it has good build quality) adds a tangible and instantly gratifying element to the ride experience. Sure, it’s a definite plus if your bike handles smoothly, and some aerodynamic profiling is always a bonus as well, but I believe there’s more currency in something that accelerates effortlessly and makes you feel like a superstar uphill. After all, let’s face it – hills are where most of us gauge our performances, and climbing prowess is for the most part about power versus weight. And Coates is right about the shop floor point too. Picking a bike up is the first thing (okay, maybe the second thing – after squeezing the brakes repeatedly) that customers do. 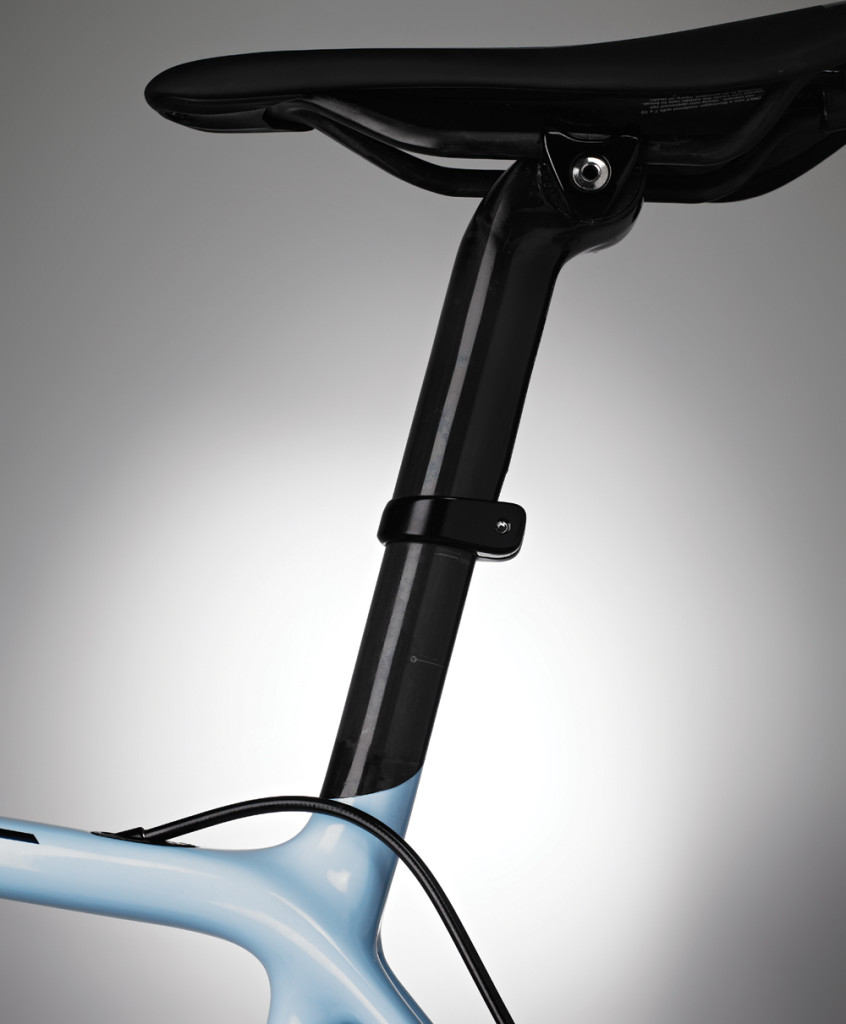 Seat mast: No component escaped investigation by the engineers to see if grams could be shed. The seat mast was pared down to create a new ultra light version.

Shedding weight from a frame is always a case of striking a balance, trimming grams where it won’t affect the ride quality and optimising lay-ups so that every single strand of carbon serves a purpose. Trek appears to have got the mix spot on with the Émonda. It didn’t take long to impress me. On my
very first ride I felt immediately at one with the Émonda. I’d describe the feeling as riding ‘in’ the bike rather than ‘on’ it, something that for a micro-adjuster like myself usually takes a fair amount of time and fettling to get right.

The rolling hills were early opportunities for the Émonda to show what it was capable of. It seemed to gain, and hold on to speed with ease on the undulating lanes, in or out of the saddle, but pointing it up the bigger climbs was where it really showed its true colours. It’s a beautiful sensation when a bike feels
like it’s genuinely making a climb easier for you. The Émonda showed no signs of being flappable under even my most aggressive hill efforts, and with such low weight it was like having a few extra watts on tap. I wondered whether Jens Voigt was also thankful for the bikes benefits while riding his Émonda during this years Tour de France. 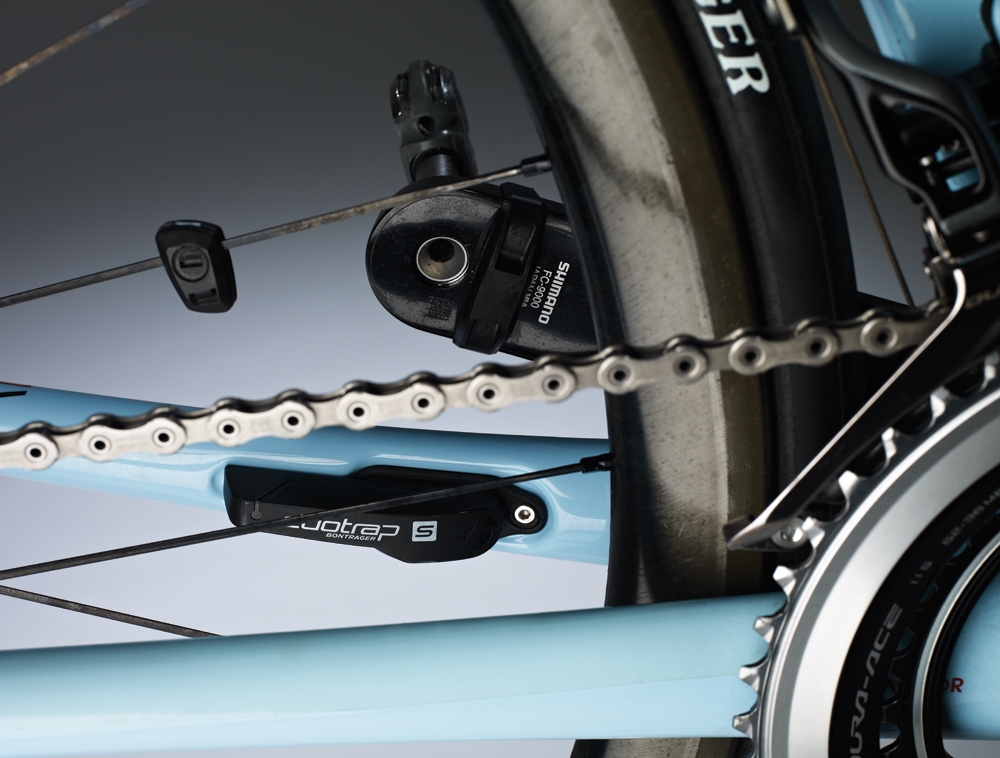 The detail: Trek’s new Duo Trap S is one of the neatest solutions we’ve seen for integrating data capture into the frame design. The sensor, sitting almost out of sight within the confines of the left chainstay, allows both a wheel magnet and crank magnet to calculate your speed and cadence. The latest version works on both ANT+ and Bluetooth platforms, which means it will pair with just about every device on the market. It’s further evidence, along with the Blender bar mount and the integration of the 3S chain catcher, that Trek is thinking about every aspect of the ride and minimising the clutter associated with current trends.

I’ve since travelled to Italy with the Émonda and I have not come back disappointed. It’s a dream to ride uphill, and it carries on delivering over the top and down the other side. I haven’t, in over two months of testing, found a chink in the Émonda’s armour. The Bontrager Aeolus 3 D3 wheels are a superb complement to the bike – light and stiff enough to accelerate quickly when you lay down the power. The only glitch is the supplied cork brake pads’ performance in the wet, which left me white-knuckle braking in the Dolomites in a heavy downpour. But that’s an easy and inexpensive fix.

There is a lot more to a great bike than just being light, but when the rest of the aspects are as good as on the Émonda, then it’s always going to be hard to dismiss weight as a deciding factor in a bike’s performance. I’ll genuinely miss it once this review is published and the bike is returned, and I’m already pondering how to reconfigure my all-time top three, to give it a well-deserving place. 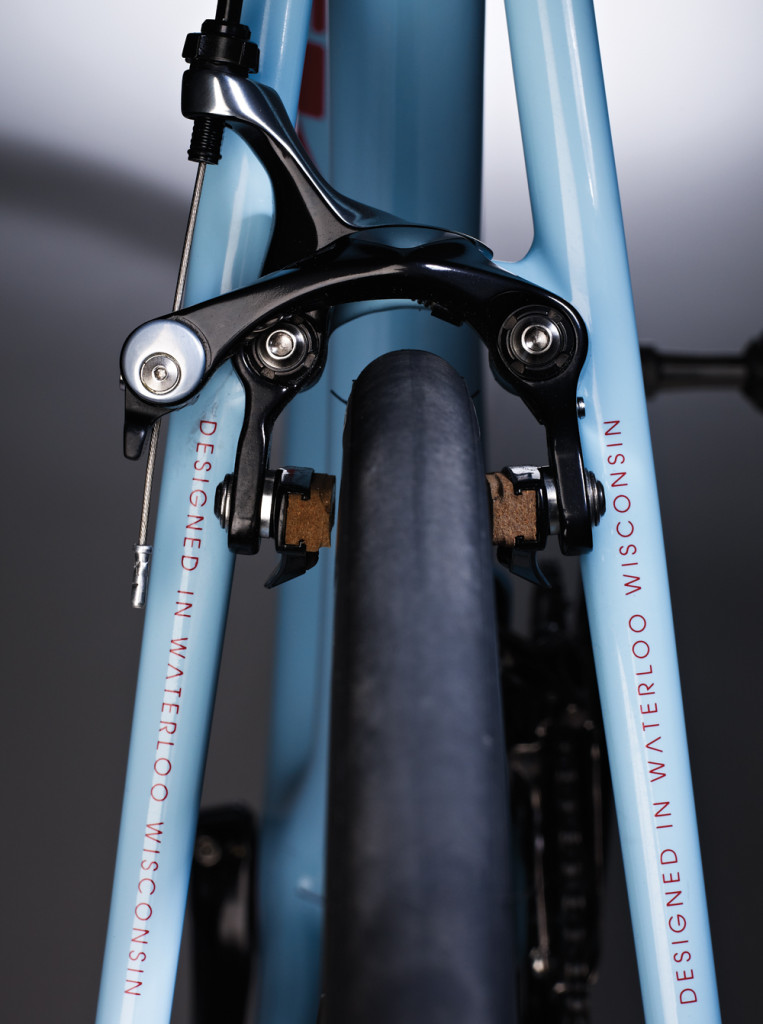 Rear brake: Trek is one of the first manufacturers to use a direct-mount rear brake in this traditional seatstay position. Plus points are increased tyre clearance and the ability to shave further weight from seatstays.

We most recently put the Emonda SLR 9 Dura-Ace Di2 through its paces during our Big Ride around Canberra. Check it out in action here. 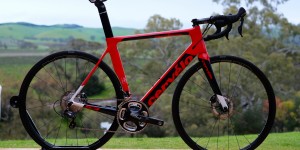