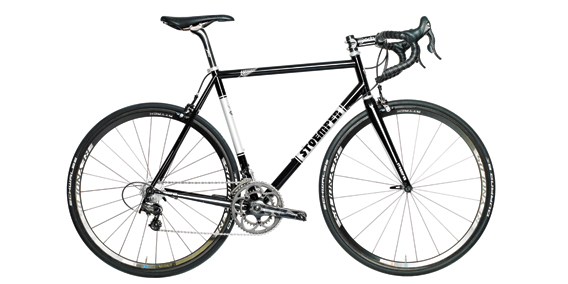 Stoemper is spearheading the resurgence of steel as a race frame contender, but can steel really compete with carbon?

Pregon in the US has built a reputation for being the home of quirky, artisan bike brands. It seems there is something of a collective ethos in the 33rd State for amalgamating the passion for riding bikes with the passion for crafting them. In their midst is Stoemper, whose frames are the handiwork of multi-material-experienced builder Todd Gardner. But there’s a significant other: business partner David Alvarez, US born but now fully Belgium ensconced. It’s from Alvarez’s northern European influence the brand takes its name. Stoemper, pronounced Schterm-per, translates as ‘mashing’ or ‘stomping’ (as in ‘on a big gear’) but according to brand agent Scott Purchas, it really more closely associates with the notion of being a rouleur – that’s to say, relentlessly hardworking.

Just in case you’re in any doubt, Stoemper’s brand message on its website states: ‘Designed to be raced the shit out of.’ Look closely at the finer details of the Taylör frame and you’ll see the aggressive house style doesn’t let up. The headbadge is Godzilla, the seat tube bears a graphic of a knuckle duster and the frame builder’s signature is a hammer crossed with a lightning bolt. Given this clear intent, on my first ride aboard the steel Taylör I was expecting a boxing glove to pop up out of the stem and punch me in the face if I didn’t ride hard enough. 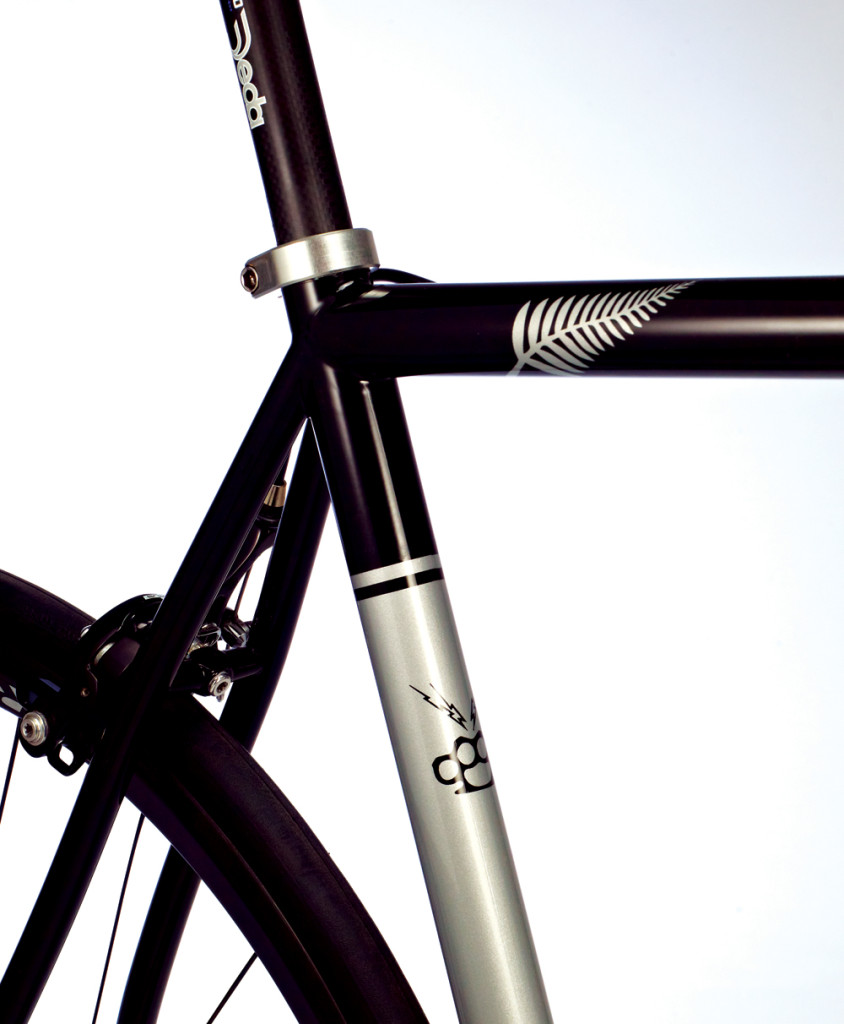 Decals The knuckle duster graphic on the seat tube is a symbol of the frame’s feisty persona. The silver fern on the top tube is a nice personal touch chosen for this bike’s Kiwi owner (who kindly let us borrow it).

Like many niche, custom brands, Stoemper is a small company where output is secondary to perfection. Gardner shapes every tube mitre and bend himself, so production is limited by the speed of his own hands. He boasts a wealth of frame-building expertise in steel, aluminium and titanium, but currently Stoemper only has bikes in steel and aluminium in its portfolio (both cyclocross and road frames). Despite its Belgian DNA, the Taylör pledges full allegiance to the Stars and Stripes when it comes to construction. The frame is made from True Temper steel (specifically its S3 tubeset), TIG welded with such care the tube joints are almost invisible, and the fork is provided by US carbon giant Enve Composites. No fewer than 11 stock frame sizes are available, all built to
order, and of course custom options are always a possibility when you’re building entirely from scratch each time. That also means each customer
gets to choose the paint scheme, with two colours included in the price, but the sky’s the limit if your pockets are deep enough. 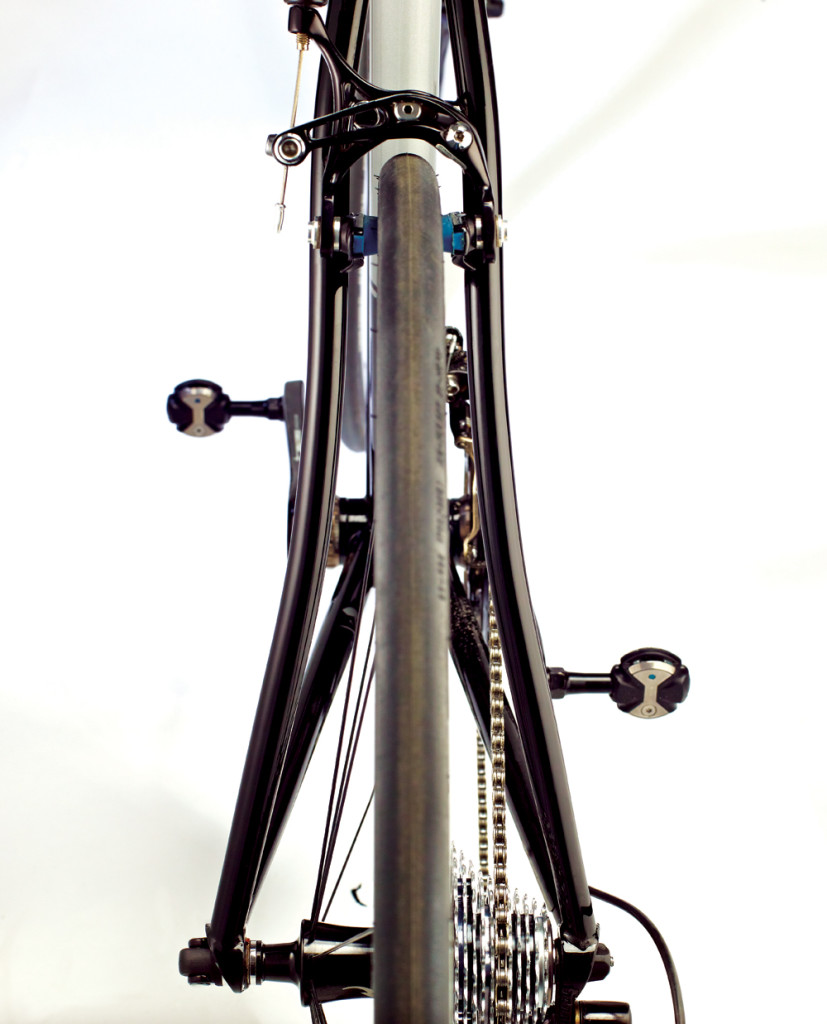 Fork The Enve 1.0 fork (above) might be a stock item, but it gets a full custom paintjob of the customers choosing, just like the rest of the Taylör’s frame.

In terms of geometry and features the approach is fairly traditional. There are no integrated bearings, BB30 or tapered head tubes here. There’s barely any discernable slope to the top tube, plus the front end is fairly tall once you add headset cups to the actual head tube measurement. On top of that, the frame has clearance to run up to 27mm tyres. None of which shouts ‘out-and-out racer’, which is the ring that Stoemper is throwing the Taylör into.

Yet, despite bearing all the hallmarks of a traditional steel ‘comfort’ bike, Gardner has managed to instill the Taylör with a racer’s heart. On the road, the bike has a feisty persona and immediately surprised me in terms of its responsiveness. It doesn’t quite have the sharp crispness of some beefier carbon frames, but it’s not far behind. I’d say the difference is really only noticeable in the initial acceleration phase. Once you’re past that burst and up to speed, the frame continues to deliver pace in a very pleasing way, never feeling flexy or like it’s holding you back – and that’s with a relatively chunky Reynolds Attack deep-section wheelset slotted in. 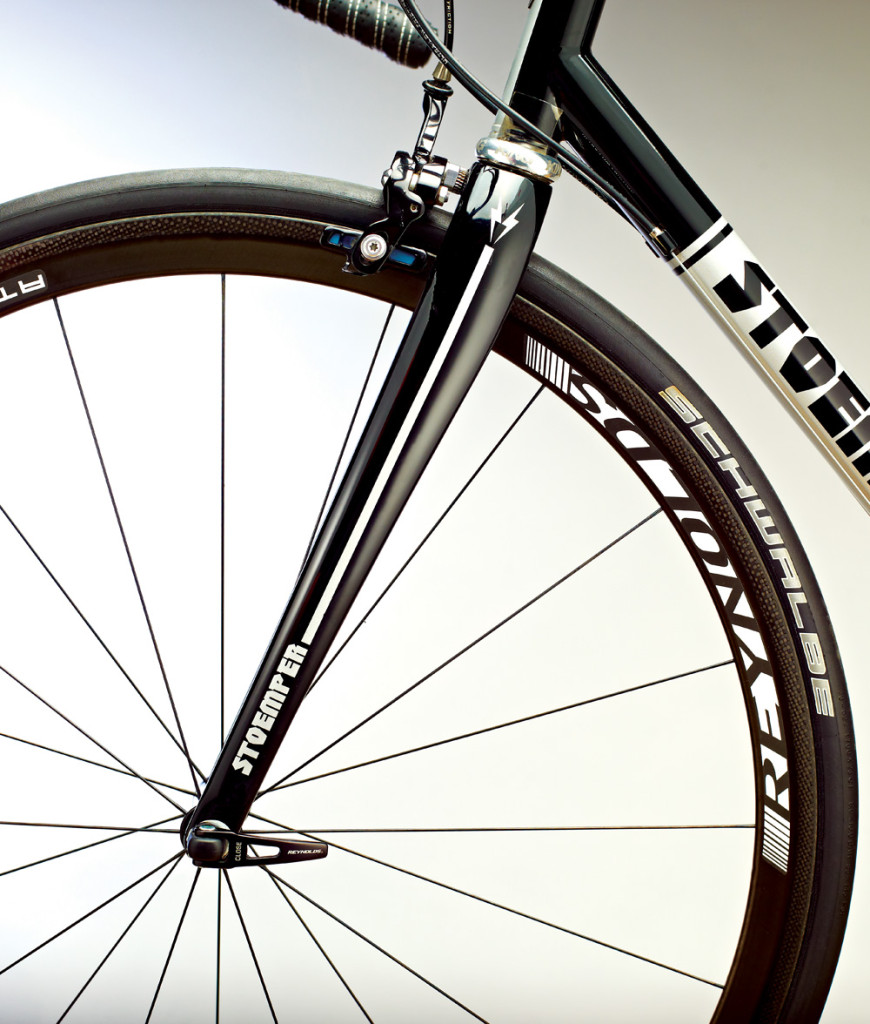 The wheels were actually my least favourite feature of this test bike. I found they had a slightly wooden feel, and a lighter set of hoops would have livened
up the ride. The Campag Chorus groupset is not the weight weenies’ choice either, but you can’t knock its dependable function, and it’s a fitting groupset
for the overall aesthetic on this build.

Stoemper has selected to slot in Enve’s 1.0 carbon fork. It’s the kind of off-the-shelf item that, some might argue, feels slightly juxtaposed with what is otherwise a completely bespoke build, but forks are a difficult component to make well, so the Enve stock models have become a regular ‘go-to’ fork for this type of bike.

It offers a really good balance of a low weight, solidity in terms of lateral support and ample comfort to boot. I use the term ‘ample’ as there is still noticeably more vibration coming through the front end compared to the rear of the bike, but when it comes to handling it’s a sacrifice worth making. 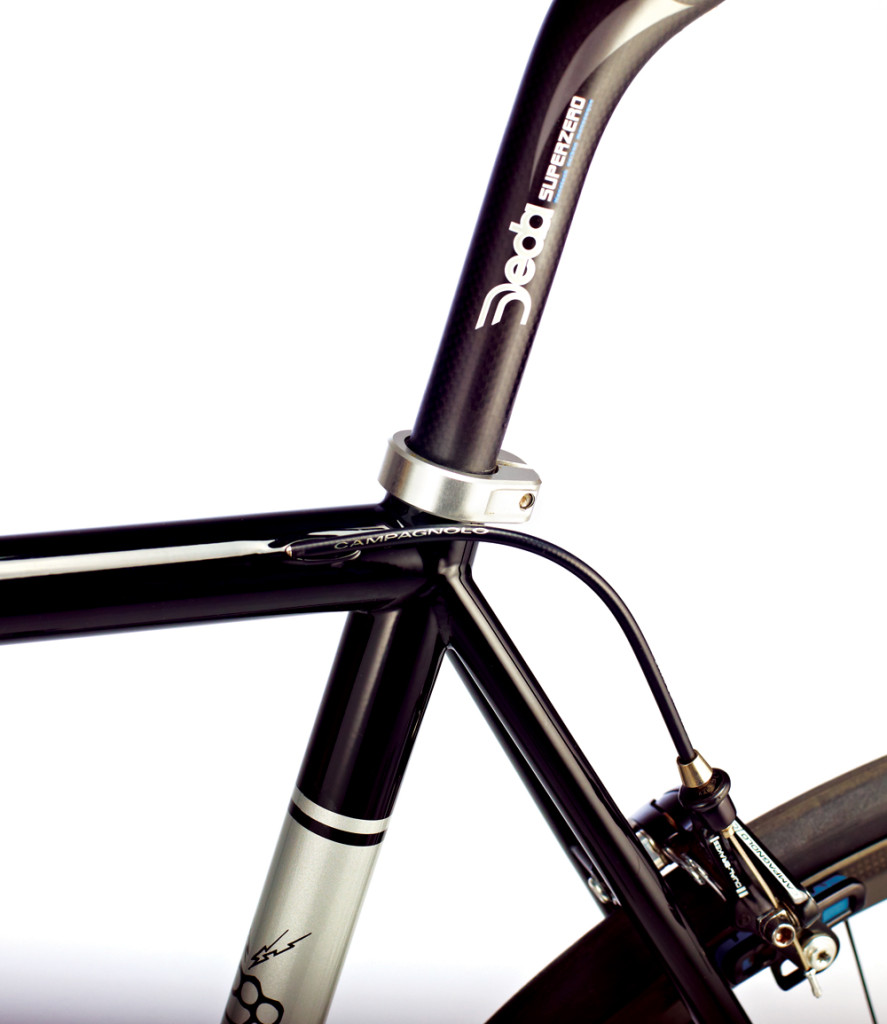 Seat clamp The quality of the TIG welding on the Taylör reflects the time and care that goes into each and every build. But amid that beautiful neatness the clumpy, ugly seat clamp sticks out like a sore thumb

The Enve fork helps keep the Taylör’s handling precise. It’s always good to know where you stand in any relationship, but on a bike it can be the difference between grinning through a fast curve or grimacing as you pick yourself up off the floor. Thankfully, aboard the Taylör it was entirely the former. It delivers a really communicative ride feel.

The 27.2mm seatpost and curved seatstays contribute to the subtle plushness of the rear of the bike, but the ride feel must also be down to the capability of the True Temper steel to disperse the road shocks. What’s most pleasing about the Taylör is that you’re getting close to having your cake and eating it, because there don’t seem to be too many compromises to live with in order to enjoy its benefits. It’s not overly heavy at 7.9kg including bottle cages and pedals, even with a build kit that isn’t particularly svelte, and in terms of performance Gardner has put together a frame I’d feel happy to race. 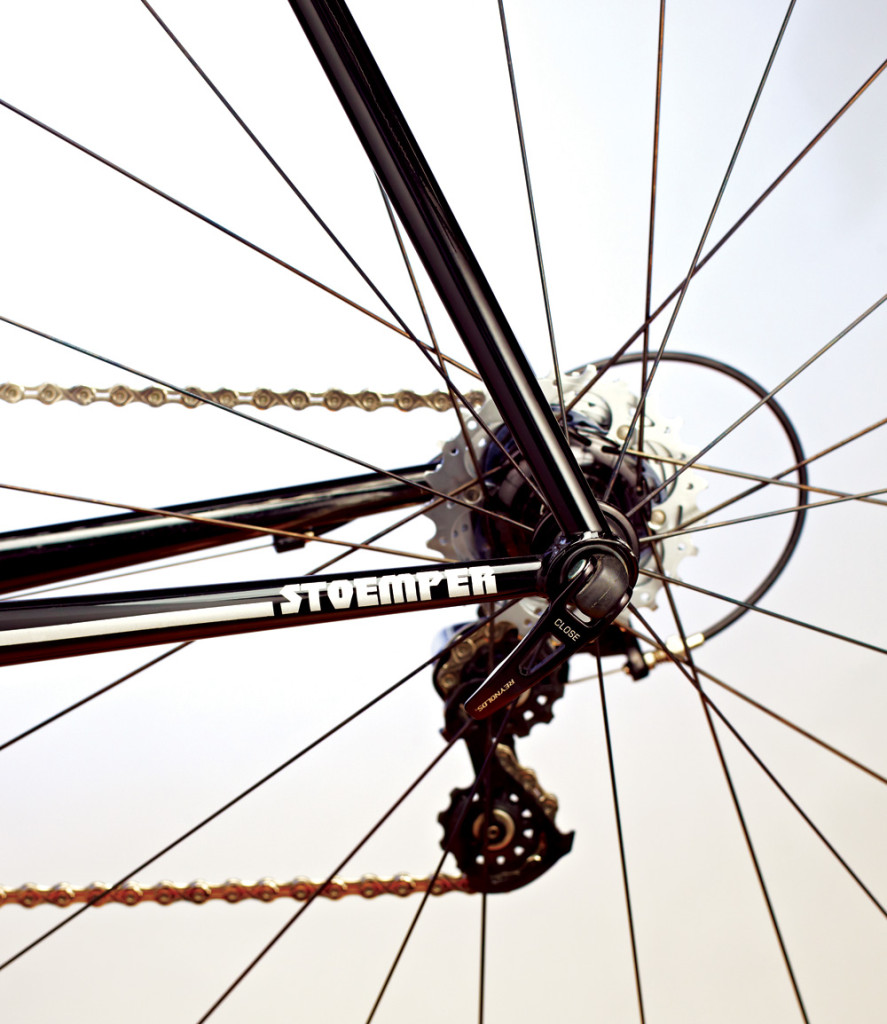 The dropouts are not actually made in-house by Stoemper, but luckily, being based in Oregon means there’s plenty of choice of local companies that specialise in the production of such steel finery as these Breezer dropouts selected by Gardner for the Taylör. Another advantage of steel frames is there’s no need for replaceable hangers as any damage can most often be repaired with minimal fuss. 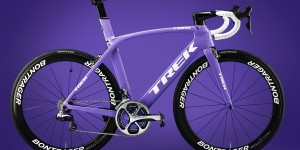 Trek hasn’t just given its flagship Madone a cursory makeover – it has redesigned the ...