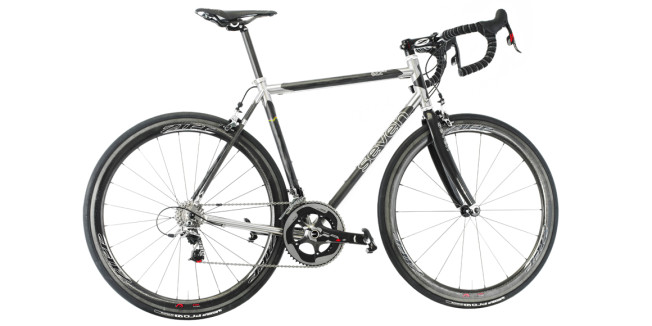 Sell the car, the house, the kids – the stunning new offering from Seven is here

When the Seven 622SLX arrived in the office, an exclusive for Cyclist, we weren’t sure whether to ride it or frame it and hang it on the wall. It’s a thing of beauty. The titanium lugwork is a blend of functionality and art form, as if it has been draped around the carbon.

Ti is a notoriously tricky material to work with, so it’s all the more impressive how Seven’s engineers have teased the intricate designs into the lugs. Many a time riding this bike, head down with effort, I’d catch a glimpse of the ‘7’ machined out of the lug at the front of the top tube and (without wishing to sound unhinged) I grew fond of its position there. It’s just so pleasing to the eye. Simple things appeal out on the road sometimes.

Our 622SLX was finished with a matte clear coat on the carbon and the titanium was raw but lightly brushed to a satin sheen, so no paint to hide any imperfections. Not that you’re likely to find any in a frame that’s gone through 50 individual checks, 28 in welding alone, with a brand ethos that would put anything outside of a 0.001-inch (less than the thickness of a human hair) tolerance in the scrap. This doesn’t mean that you can’t have a paint job if you want it. The Seven is a fully custom bike so you can choose your own colour scheme if you like, or pick from one of its many set designs. When the materials themselves are so attractive naturally, I can’t imagine why anyone would see fit to cover up the raw finish of this frame.

Seven manufactures everything in-house in the United States. Its facility is located in a small hotbed of custom bicycle brands just outside Boston, Massachusetts, with neighbours such as Parlee and Independent Fabrication. And like those brands, Seven is not the kind of company to operate in model years.

Its bikes are in many respects timeless, each one unique and standalone. The 622SLX is brand new for 2013 but you can rest assured that year-on-year your bike is not going to be superseded in the same way that happens with many mainstream brands. For many people, this timelessness is a big part of ownership, but in the case of Seven, it’s likely to fall secondary to the special treatment each customer receives.

The 622SLX frame construction is best described as a modern slant on an old tradition with its carbon tubes bonded into titanium lugs. It’s a method of frame- building that Raleigh toyed with back in the 70s, experimenting with similar carbon tube frame design. The trouble was that despite it being a very cost-effective way to produce carbon frames, manufacturers struggled to get anywhere near the stiffness required to be in contention once monocoque carbon bikes started rolling off production lines. Over three decades later and Seven has perfected the materials, manufacturing technology and experience to ensure the 622SLX now performs every bit as well as its modern counterparts.

The part where I eat humble pie.  I’ll admit that I was surprised by what I found out on the road. I knew that the 622SLX would have come a long way since the notoriously ‘whippy’ frames of a similar construction that were produced in years gone by, but I still suspected that, by the current standards of carbon frames, the 622SLX would struggle to keep pace. Not the case. The platform offered by the 622SLX is reassuringly sturdy, standing firm under both seated and standing pedalling inputs. In combination with our test bike’s Zipp 303 Firecrest wheels – about as good as you can get – the resulting ride brought a big smile to my face. The Seven accelerates with ease, no doubt helped along by those aero wheels, and once up to speed it settles into a fast, comfortable ride. The best word to describe the ride experience is ‘easy’. The sense I got from this 622SLX’s makeup is that it lent itself to the sheer enjoyment of the ride, rather than being an outright racing machine.

There were moments on this Seven when I found myself pedalling hard but blissfully unaware of any specific points of contact with the bike. It’s impossible to say it without it sounding cheesy, but it was at times like the bike had disappeared beneath me. It’s not the only occasion I’ve felt this way, but it usually only happens on a bike that I’ve owned and spent months moulding to my own specific needs and dimensions. It’s rare to have one of those ‘moments’ on a test machine.

It’s pertinent to mention at this point that I refer to ‘this Seven’ because, as already mentioned, the Seven is a fully custom bike. It’s not just the colour that the company can change to your preference, but the whole make-up and geometry of the frame, meaning that the ride quality will change depending on what you ask for.

Seven handpicks each frame’s tubeset to get just the right combination of tube diameter and wall thickness to suit the rider’s weight, riding style, intended use, age and riding terrain. Seven calls this aspect ‘rider-specific carbon’. So in theory you have total control over your purchase. If you set the engineers with ‘Grand Tour Winner’ as a brief, you could end up with something far racier than the model I was sent for testing.

If I was going to have Seven build a 622SLX for my specific needs (which will happen just as soon as my Lottery numbers come up) I’d ask the engineers to firm up the front end a little. Maybe I’ve become too used to riding tapered headtubes but for me the front end needed some additional support. The fork itself suffers a little from flex too, notably under braking, which has the effect of causing the front wheel to tuck under slightly as I braked hard into a tight turn.

That’s my Mr Hyde talking, whereas the Dr Jekyll in me wouldn’t change a thing. The Seven isn’t a Trek Madone, a Specialized Venge, a Cannondale SuperSix EVO or a Cervelo S5. It’s for a different type of rider. The 622SLX customer is the type of person who would appreciate writing with a Mont Blanc pen. It’s as much about being a cherished possession as it is about being a functional tool. The 622SLX is a purchase of the heart, although with a $16k price tag you’ll need to fall deep, deep in love before you reach for your credit card.

Extras: What, you want extras at this price? 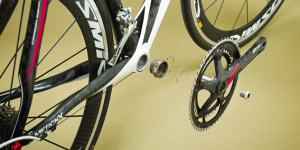 The bottom bracket is easy to ignore, but it's the heart of your bike’s performance