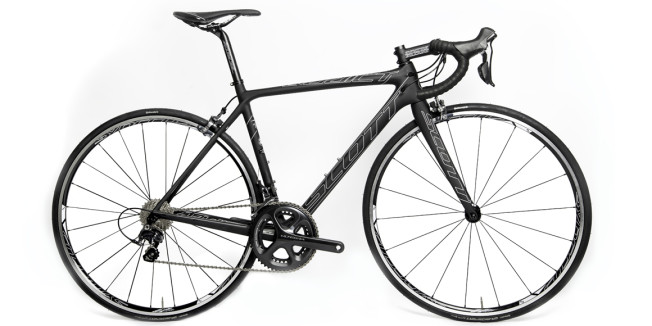 A classical design gets a revamp that, as Cyclist discovers, is far more than a simple stealth aesthetic

As I roll through the quiet one-street town of Tumbulgum in north-east New South Wales, a matte-black Japanese import pulls out, some way down the street in front of me. Its stealth appearance is foiled by an obnoxious exhaust and excessively large wheels. Glancing down at the Scott Addict I recognise the irony that in its subdued matte-black finish and neatly connecting lines, this redesigned package could carry a significantly lower level of pretentiousness. 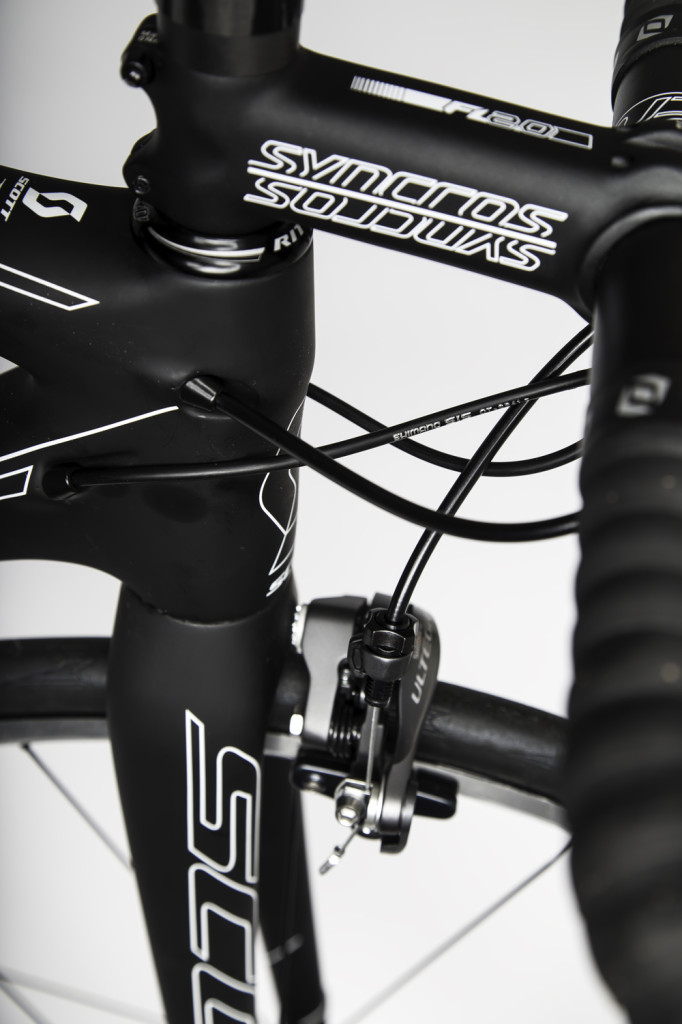 Clean lines: The latest incarnation of the Addict gets a similar internal routing treatment for the gear and rear brake cables – akin to the Foil.

We both stop at a ‘T’ intersection that heralds the boundary of the town and the Nissan rapidly accelerates along another narrow road dappled with pot-holes and patchwork tarmac repairs. A less suitable road would be hard to find, but the Addict finds itself on the opposite end of the spectrum, quietly tracking along the charismatic country roads that snake through the cane fields and represent a large portion of the region’s economic identity.

With the release of the new Addict, Scott has managed to fittingly complement the success of the Foil and Plasma (time trial) ensembles to create a stable of bikes that are fitting for the high-level demands the brand offers the WorldTour and Pro Continental squads of ORICA-GreenEdge and IAM Cycling.

In its first incarnation the Addict was widely known as one of the lightest and better-performing frames available to us normal folk. This was at a time when mass-producing manufacturers had painstakingly pushed below the sub-1kg mark for a frame. At the same time, the bar was rapidly being lowered to the point where the bike of a professional needed weight added so that it met the legal requirements stipulated by the UCI. It’s a delightful problem to have and one that continues to haunt the UCI’s bike-weighing commissaires to this very day. 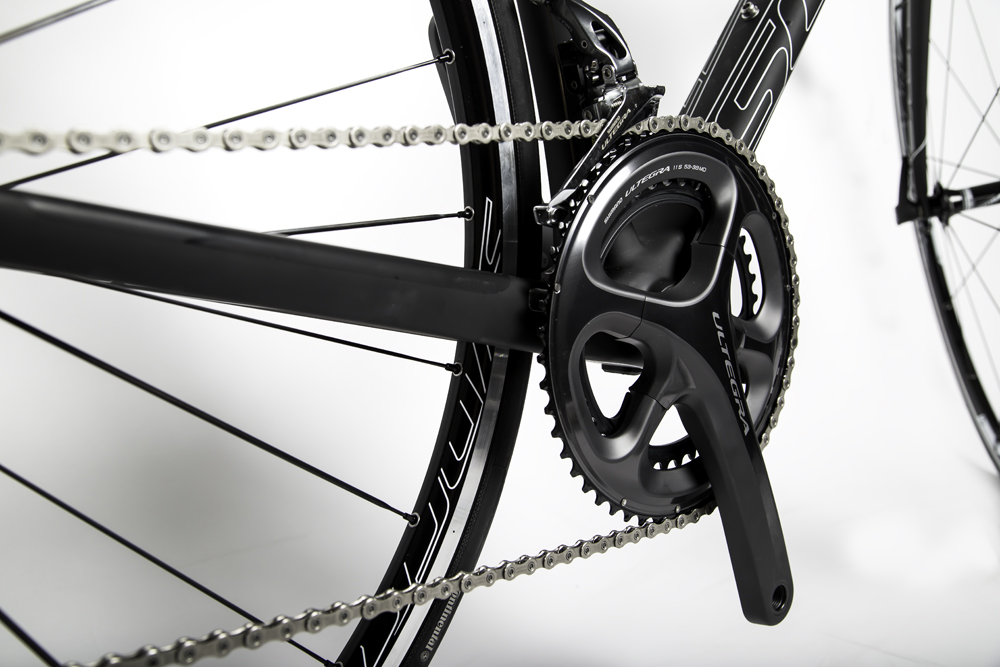 Under the hood: As mentioned in the review, installation of a new inner gear cable will require all derailleurs to be de-tensioned – unless you have a hand steadier than Mr Miyagi.

The new HMF carbon frame and fork on test tips the scales at a claimed 1,250g, while the range-topping HMX-SL found on the Addict SL boasts a weight that you’d expect from a one-litre carton of milk. With a few hundred grams separating our $4,099 package from the top-of-the-line SL, the weight-conscious

will be catered for regardless of budget.

While stiffness and the direct feel of the aero-focused Foil is impressive, there is something just a tad more elegant when aboard the Addict. Without bashing overused lines about compliance, it’s worth mentioning the Addict’s forgiveness over roads like those experienced through the cane fields. The narrow seat post has a substantial amount of give – a simple flex test demonstrates this nicely – and marries in with a minimalist rear end to provide a ride quality that makes it an enduring model in the Scott range.

There’s a simplistic appeal to the exterior coat that does more than just spell out marketing acronyms. Its graphics come from a less-is-more approach and this allows the rider (and watcher) to investigate the frame’s shaping without being blinded by on-trend fluorescent paint and logos. The open lettering and limited branding opposes much of what’s currently on the market and, while this undoubtedly appeals to many – including high-profile teams and sponsors – the limited coverings on the Addict 20 were certainly appreciated amongst fellow cyclists who joined me for numerous rides. 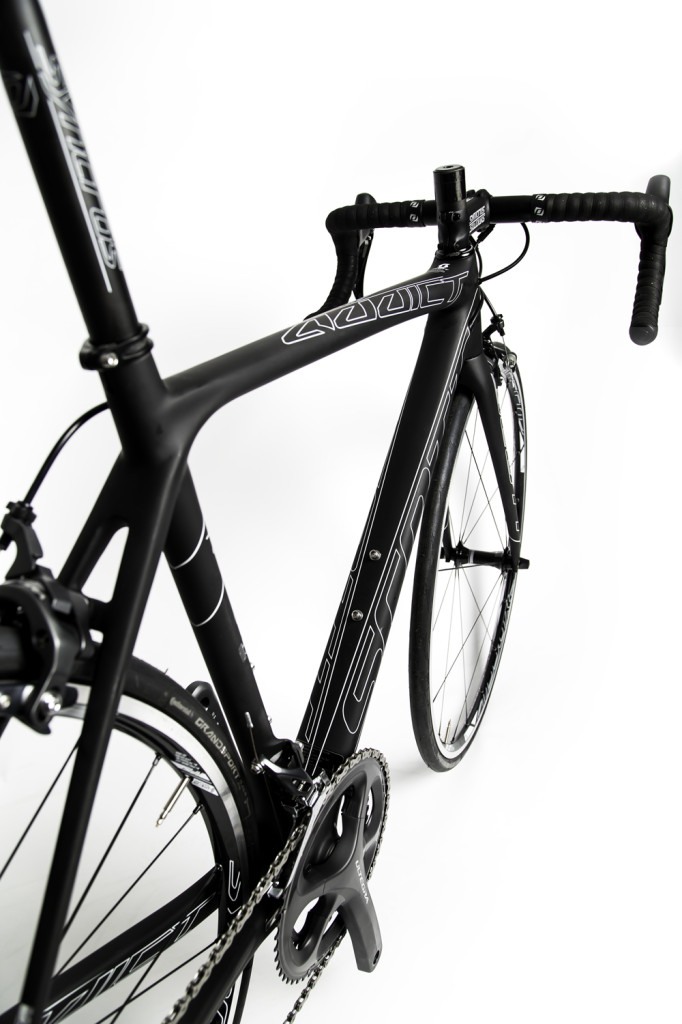 Giving back: The latest Addict is specced with a 27.2 Syncros carbon post that soaks up the bumps that would otherwise impact the caboose. Under foot, however, is a different story. What does this all mean? Comfort where you need it and maximum energy transfer where it counts.

Scott has used the same internal cable routing featured on the wind-cutting Foil and it’s adaptable for mechanical and electronic groupsets. The cables enter neatly into the down tube and do little to hinder steering. Installation of a new cable can be a little troublesome as both front and rear derailleurs need to be de-tensioned to extract the cable guide located under the bottom bracket shell. The opening, however, is generous enough to easily navigate a cable to its destination.

Aside from installing a significantly longer stem there is little that would need changing with longer-term ownership. With a longer 130mm stem fitted, the steering becomes more controlled and steady compared to the stock 100mm. This is a huge improvement on technical descents and allows for a more predictable attitude through long radius corners.

On first impression and look alone, the Syncros saddle shouldn’t have suited but I found little to complain about – even across pothole-riddled roads. The in-house Syncros components match the aesthetics and provide functionally styled options to fit into a competitive price point. After spending a little time adjusting the position of the 11-speed Ultegra levers, the bars also had a more familiar feeling.

While you shouldn’t expect to see Matt Goss or Michael Matthews using the Addict during Tour sprints, it has already become the go-to frame for riders like Simon Clarke and Esteban Chaves whenever they are faced with a mountainous race profile.

Much like the covers of celebrity gossip magazines, weight has always been a strong point of focus for the cycling industry and this trend is never going to change despite the UCI trying to police it – to a degree. It’s one of the biggest selling or marketing tools at a manufacturer’s disposal and, with this new offering, Scott has placed itself on the front line.

The Syncros skewers fitted to the Scott Addict 10 follow a similar twist-tighten design to those made by DT Swiss. In fact, the RP1.5 wheelset employs the manufacturer’s components for the entire package: skewers, hubs, nipples and rims. In essence, you get the reliability of a Swiss wheelset with a set of decals that match your bars, stem, seatpost and saddle. For a closer look at the tesing procedure of the Addict 10 head to Cyclist.com.au. 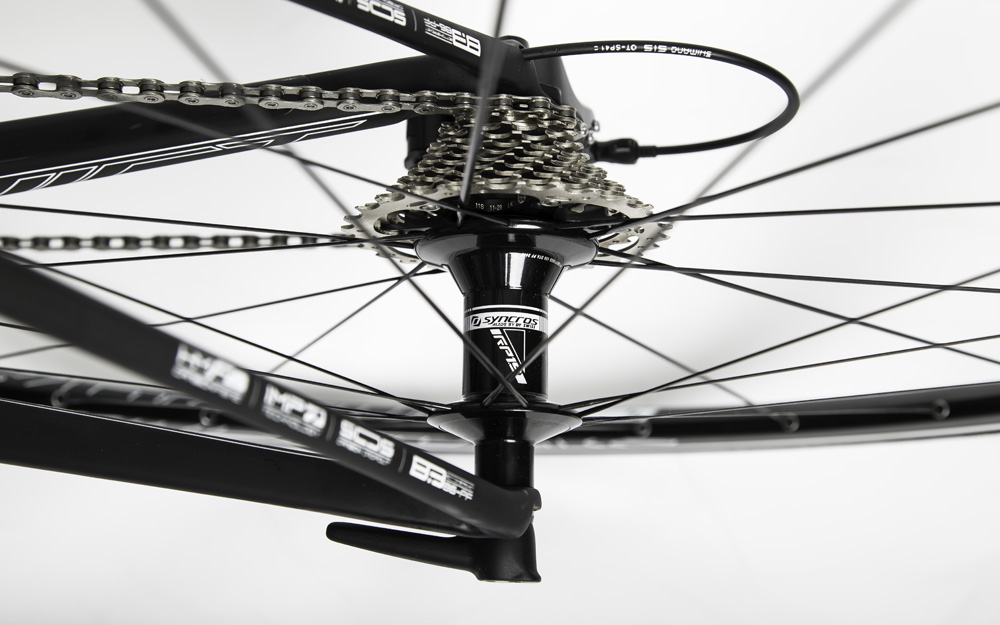 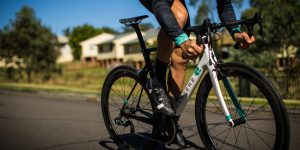 If you’ve never heard of CHAPTER2, you’re not alone. Prior to testing this fledgling b...