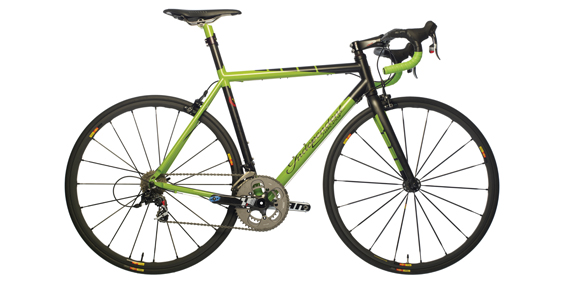 It delivers on its promise of being engineered for sprinting, climbing and fast criteriums

Independent Fabrication (IF) has an approach to building bikes that makes my life, as a bike tester, quite tricky. At least it is when it gets to this part – writing about it. That’s because what you, the customer, is buying doesn’t necessarily exist yet. You’re bike is simply your concept (along with IF’s guidance if you want or need it) waiting to be sketched out on the designer’s pad. It’s a blank canvas approach that not many brands implement, whereby providing it is within reason – and indeed the remit of its expertise – you can make like Frank and do it your way.

That’s the strong arm of the business, the basis upon which the company was founded, but there’s an array of ‘off the peg’ options to pick from too, ready to spark the imagination, or perhaps negate the need to. So I guess it’s worth having that in the back of your mind as you read this review to help you keep what I’m saying about this particular Ti Factory Lightweight in some kind of context.

This IF’s moniker comes from the stripped-out, big-grunt Detroit muscle cars of the 1960s that were defined by their high horsepower and all-out quest for maximum speed, which is exactly where IF was going with its Factory Lightweight project. In its own words, “This is a strict racing machine, designed and engineered for sprinting, climbing and fast criteriums.”

To bring this bold promise to fruition, aerospace-grade 3/2.5 titanium tubing (which IF claims improves fatigue life) forms the bulk of the frame along with a carbon seat tube, inserted full length within – blending the ride characteristics of the two materials. That’s not a new concept – in fact IF has other bikes in its stable that are built this way – but what’s new for the Ti Factory Lightweight was amalgamating titanium with some of the latest technologies for oversized bottom bracket and headset standards. The bottom bracket is specifically hewn to house press-fit BB30 bearings. The headtube is oversized to accept a 44mm inset bearing, top and bottom, and supports a custom Enve carbon fork. Each of these attributes offers an associated stiffness gain, plus potential weight savings, but not to be overlooked is the much larger surface area the fatter tubes present for welds. This enables the butted downtube to be a bloated 44.5mm diameter. The top tube isn’t far behind either. The Ti Factory Lightweight certainly isn’t shy when setting out its stall in terms of appearance.

The result is something that feels nothing like any other titanium bike I have ever ridden, particularly not from a 3/2.5 titanium tubeset at this weight. I wasn’t surprised it was stiff, given the beefy tubeset, but just how stiff and responsive the Ti Factory Lightweight felt was well beyond what I was expecting. Until now, I don’t think I could honestly say I’ve ever ridden a titanium bike that has shown me the necessary characteristics to justify calling itself a racing thoroughbred. It’s a slightly quirky material that, in my experience, has struggled to really define itself at the racing end of the spectrum. Too light a frame and it gets whippy. To sturdy a frame and it’s frankly often quite heavy, with a tendency to feel dead. Finding a line between these two is no easy feat, but IF has apparently cracked it with the Ti Factory Lightweight. So I stand corrected. It can be done. And it can be done well. It absolutely delivers on its promise of being “engineered for sprinting, climbing and fast criteriums”.

Straight off the bat, the IF makes you aware it’s ‘ready when you are’. It’s like walking an over-excited terrier, constantly tugging on the lead, willing you to move faster. It’s certainly not a bike that’s keen on settling for lack-lustre pedalling.

The IF’s ability to accelerate is mightily impressive, in part due to Mavic’s R-Sys SLR wheels, which help the initial pick-up thanks to their low mass and super-stiff build. The ride quality is as bold and in your face as the bright green that adorns this shining example.

It’s a bike that encourages you to smash it. In fact if it had a voice I’m certain that’s exactly what it would be shouting from beneath you as you rode. Be prepared to want to sprint away from traffic lights and race for road signs. It’s that type of bike to ride. The pedalling platform is far more reminiscent of high-end carbon levels of stiffness than I thought was possible in titanium. It’s solidity comes from a combination of the oversized theme and IF’s build quality and material choice. The SRAM Red BB30 chainset just serves to complement.

Not to be outdone, the front end also stands its ground firmly as you sprint and climb, offering a firmness that manifests into stable, predictable tracking through fast, swooping bends. Enve’s custom-built fork has got to be credited here too. It’s light and laterally very stiff – the perfect partner and an ally to this frame’s front end.

IF’s integrated carbon seat tube certainly adds a unique appearance to the frame design. My feeling is it’s as much a stylistic feature as it is a functional one, because if its inclusion was to dampen vibration and improve comfort then it’s not overly apparent – plus I’d argue it’s the titanium components of the mainframe that are dishing out the stiffness and performance I’ve been harping on about. The rider still gets to know about a lot of the road surface imperfections, but acceptably so. The custom ‘IFTop’ seat clamp is both beautifully crafted, proudly bearing a cut-out IF logo, and functionally spot on, making light work of tweaking saddle position with just a single bolt. We weren’t the first to test this particular bike, and its previous pilot had already taken a hacksaw to the seatmast, but thankfully there’s a fair amount of scope for adjustment with the IFTop clamp, so I was still able (just) to get my desired set-up.

IF’s additional touches, such as making the head badge from sterling silver and engraving the dropouts with its name, demonstrate the care and attention that has gone into this bike. All in, the Ti Factory Lightweight has single-handedly managed to turn around my opinions of titanium as a genuine contender in the race arena. 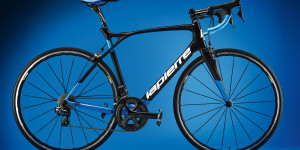 Lapierre has tinkered with the tube junctions on its latest Xelius frame to create a more ...