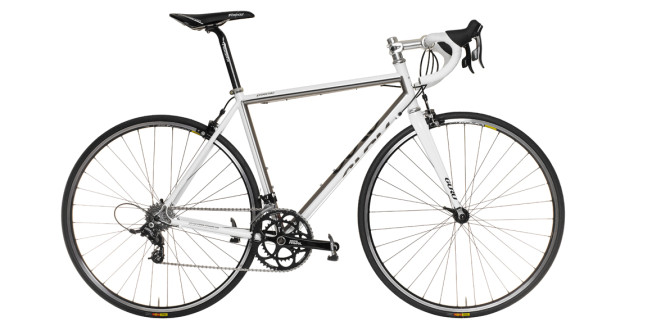 Beautiful to look at and luxurious to ride, the Praemio is a great frame with big potential

You’ve got to be pretty sure of your credentials if you’re going to call your company Guru. But the moniker is misleading. Founder and master frame-builder Tony Giannascoli named it, he claims intriguingly, not to be suggestive of his own knowledge and skillset, but instead to represent the capacity the bicycle itself has to empower, inspire and teach life lessons. So it’s more of a spiritual name than a self-aggrandising one.

Tony’s surname may be misleading, too. His ancestry might be Italian but he and Guru are Canadian, based just outside Montreal, Quebec. Conveniently this is also regarded as the global hub of the aerospace industry, and it’s pretty obvious from its bike portfolio that Guru likes to borrow more than a cup of sugar from its neighbours. The Praemio is a full titanium frame, claiming to be constructed from the finest grade 3Al-2.5V titanium (the kind used in aircraft and hydraulic engine systems) and comes with a full carbon own-brand fork.

Unlike a lot of titanium frames, our test Praemio gets a paint job too, which is entirely your choice. Personally, I’m not usually a fan of painting titanium frames because you’re effectively sacrificing one of the material’s most desirable attributes: its surface is extremely durable, scratch and chip-resistant. Yet this Praemio is undeniably beautiful in this livery. Yes, you’ll have to take greater care of it compared to an unpainted titanium frame, but you’ll also take great pleasure in this shining example’s contrast of brilliant white against gleaming metal, plus its clean lines and glimpses of the raw material showing through exquisite detailing such as around the bottom bracket and frame logos too.

Staying with the aesthetic pleasures a while longer, the Praemio sports the most ornate pair of rear dropouts I’ve encountered in a long while, including intricately machined, bolted alloy inserts. I had to ask the question, was there more to the tale than just visual appeal? It looked like there surely must be. “Well, it’s mostly aesthetic,” came the reply from Guru, “although one benefit is that the quick-release skewers tend to bite much better into the alloy surface, whereas titanium is so hard they need to be done up much tighter to hold the wheel firmly.” That makes a lot of sense, and it’s something I’d never really given much thought to. Because the inserts are replaceable it doesn’t matter if they get a little chewed up over time, and as the right hand side incorporates the mech hanger, that’s covered against accidental damage too.

A win-win feature then

Spec-wise you’d be right in thinking that it must be modest given the painted frame alone costs $4,800 (in a raw, burnished finish it’s $4,425), but supplier Pearson Cycles assures me the component choices were carefully considered, reflecting the kit that the shop is selling most of. There’s still a lot to be said for the upgrade potential that buying a bike this way round facilitates (as opposed to buying a similarly priced bike with a cheap frame and expensive components that will one day need replacing anyway). Investing in such a top-end titanium frame means it’s likely to survive many groupset revisions, and be continually upgraded throughout its long life.

That’s not to say that I think the kit that comes with this bike is poor quality. I’m not about to badmouth the SRAM Rival group and Hope wheels. In fact, although they don’t sit at the top of their respective ranges, both are highly capable and reliable components, which do the bike more justice than their price tags might suggest. Furthermore you’re getting a titanium bike with a sum of parts that keeps the overall price more realistic. With DuraAce or SRAM Red and some top-end deep sections, chances are you wouldn’t get much change from $12,000. This way you’re growing your investment from a smaller acorn, yet still enjoying it all the while.

Not just a pretty face

But enough of its showroom appeal, what of its performance? Frankly it’s as much a pleasure to ride as it is to look at. The front and back ends do feel somewhat different – the Praemio highlights some of the characteristics that separate titanium and carbon out on the road and it manages to get the best out of each.

The back end is solid enough, with ample lateral muscle for powerful steady-state, seated pedalling. This is, I think, aided by the sizeable girth of the chainstays (as an aside, watch out for those if, like me, your style is to ride with your heels ‘tucked in’ – I ruined a pair of overshoes catching and ripping them on the gear cable stop because the chainstays force it quite wide there).

Jumping around on the flat, or riding in a big gear over short steep rises, you can feel the back end flexing a little, but not with any great penalty to your speed. It’s still got a lively feel and, let’s be clear, the Praemio is not targeting the out-and-out racer. That’s a job for its muscle-bound sibling, Guru’s Praemio ‘R’, which should offer a bit more punch with oversized BB30 bottom bracket and 44mm headtube. Besides, the comfort aboard the Praemio quickly becomes a very endearing quality. It’s what I would have expected from a classy titanium build paired with standard spoked (32 hole/3x build) box-section wheels. Hit a pothole or a lump in the road and there’s no ‘rodeo bull’ action because the frame and Hope wheels combo deals with the impacts diligently.

Worthy of note too is Pearson’s own-brand carbon seatpost, which brings additional comfort by flexing to an almost visible extent on the bigger jolts. Indeed, it might be that the seatpost rescued me from a painful backside after I neglected to swap the saddle to my favoured test saddle and found myself doing a heap of miles on the San Marco Regale that came fitted, and which I generally don’t get on with (saddles are such a personal thing). However, I never experienced any comfort issues. After several long rides I was still unscathed in the nether regions and, while I can’t say categorically that it was the additional shock absorption offered by the frame and seatpost that helped, there’s a pretty strong case for it.

Up front, Guru’s own carbon fork, with its ‘fluted’ external shape, is easy on the eye and delivers excellent lateral stiffness, so whereas at the rear you might feel the occasional waver when stomping on the big gears, the front by contrast feels rock steady at all times. I’ve mentioned it in previous tests, but it’s always something I look for in a bike – that it should feel solid under you when riding out of the saddle, when your bodyweight is all the way up and forward. The Praemio delivered that for me.

Perhaps, just because it contrasts so noticeably with the plusher rear end, the front can appear harsh at times but, for my money, that’s exactly the right way round. You need to be constantly aware of what’s going on between the road surface and the front tyre in particular. If you’re not feeling any road buzz, the chances are you’re not sensing enough to confidently predict the handling either.

Finally, there’s one aspect about the Praemio that’s especially appealing: for an additional $300, you can go full custom, which for me seems like a very small price to pay for a complete one-off, made just to your liking. Keep an eye on this brand, because it’s growing in stature all the time. 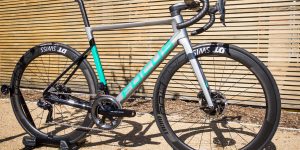 The Izalco Max has done more than enough to establish its place in the WorldTour but there...