If scientists at Brunel University are to be believed, beauty is nothing more than symmetry. Their theory of classical human beauty is that good-looking people have a left side of the face that is a mirror image of the right side. By this premise, bicycles are inherently ugly because they are asymmetric. The drivetrain runs down the right and, with the advent of discs, the braking system runs down the left. If the bike is to handle riding forces properly, certain tubes such as the chainstays need to be thicker on one side than the other. The modern bike is so irregular that it’s a wonder other vehicles don’t point and laugh at it in the playground.

Focus, however, is not willing to accept an ugly bike. It wanted to design a bike that was beautiful in the eyes of aesthetes as well as engineers, and it decided that each side of its frame should look identical from the outside. The only way to do this was to make it asymmetric on the inside, and so with the new Izalco Max, beauty quite literally only runs skin deep.

Focus currently sponsors pro team Ag2r La Mondial, and in September the team will be free to trial disc brakes in competition. Assuming all goes well, the UCI will then allow further testing in 2016 with a view to introducing them fully to the WorldTour in 2017. With this in mind, Focus took the existing Ag2r race bike and gave it an internal, disc-specific makeover. 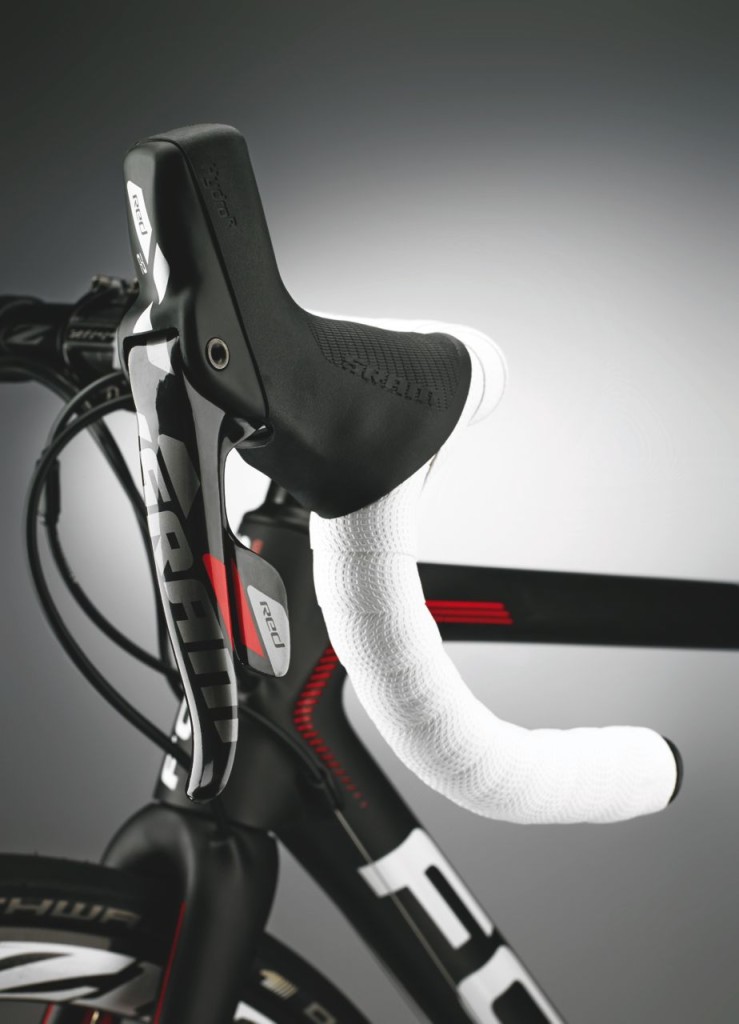 The fork is the most obvious place where this has taken place. The fork on the original Izalco Max was very skinny and lightweight, but it didn’t have the strength to support disc brakes. The new fork is visually very similar but the wall thicknesses have been increased significantly on the left leg while keeping the same external diameter. René Birkenfeld, carbon lay-up engineer at Focus for the Izalco Max Disc, was also very keen to have thru-axles. A bolt-through axle allows one continuous band of carbon fibres to run down the front of the fork and up the back, without being interrupted by the dropout.

This greatly increases the strength without much additional weight, so the disc fork only weighs 320g (just 27g more than the non-disc version). Birkenfeld says, ‘We did extensive research with our partners in Taiwan. By designing, simulating then testing different resins, fibres, lay-ups and wall thicknesses we think we’ve achieved a stiffness to comfort ratio that is way ahead of the calliper fork.’ 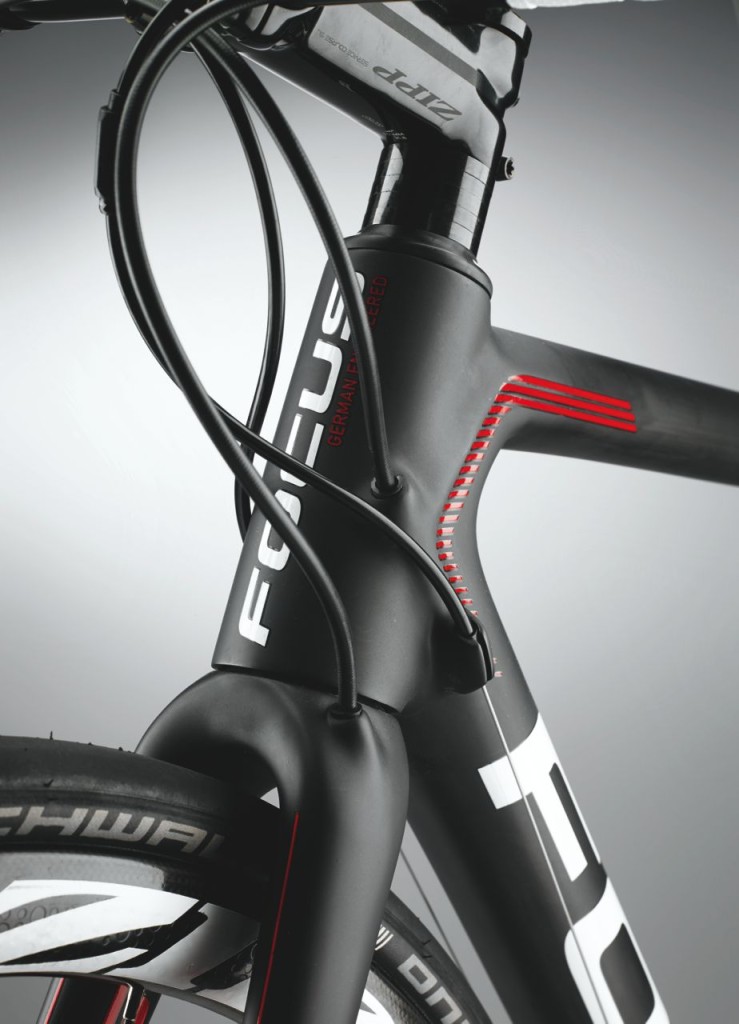 The frame too has added very little weight during its disc makeover – 40g to bump it up to 790g. The whole bike is only 6.81kg so Focus is claiming it to be the lightest production disc bike available. Despite the minimal additional weight, Focus has actually made quite a few changes to the frame. The top tube, for instance, is larger to increase stiffness and the chainstays have been elongated to 415mm for a couple of reasons. Focus opted for a 142mm thru-axle rear end, so the chainstays needed to be lengthened to prevent chain rub caused by pushing the cassette out further from the centre line of the bike. The manufacturer also says that the longer chainstays have the added benefit of increasing stability at high speed. 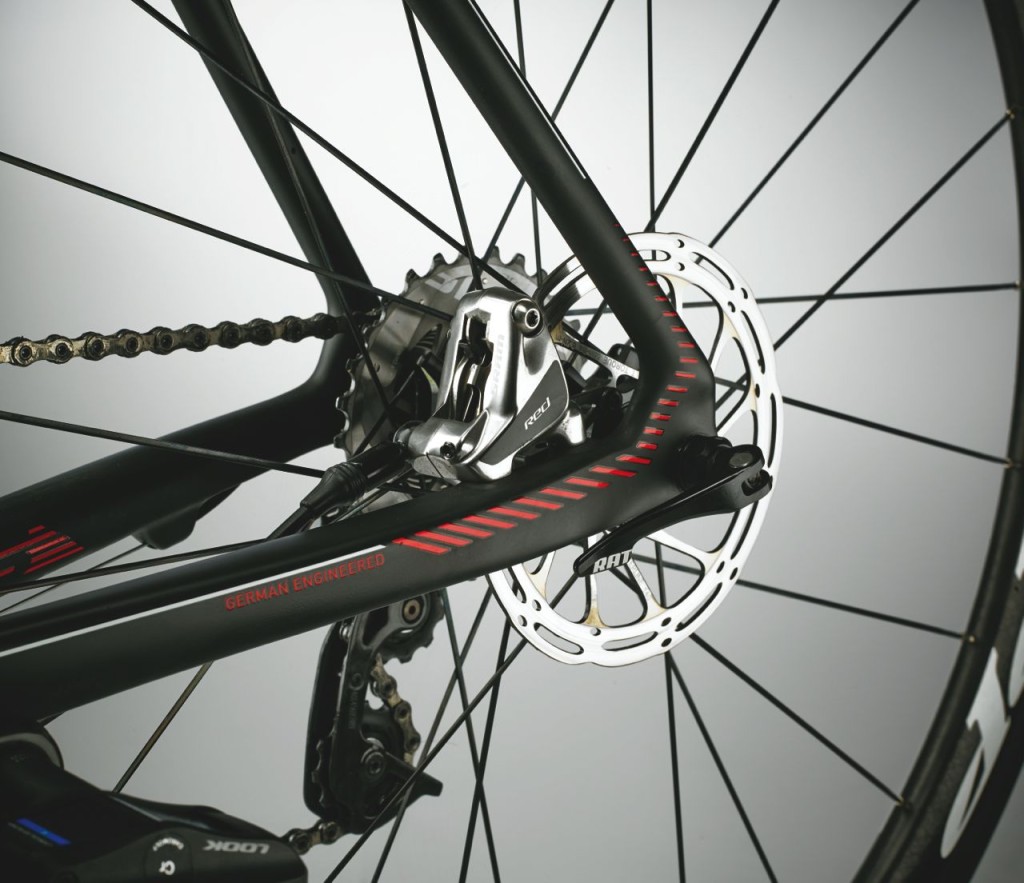 Put to the test

At the launch in Italy, I took the bike down a few long, fast descents and things certainly remained calm and composed while carving through the corners. Once the road turned back uphill it was clear that Izalco Max hadn’t lost any of its race pedigree in the disc makeover. The new rear triangle was still plenty stiff enough to ensure acceleration remained lightning quick, and the low overall weight was a bonus when the gradients pushed above 10%. 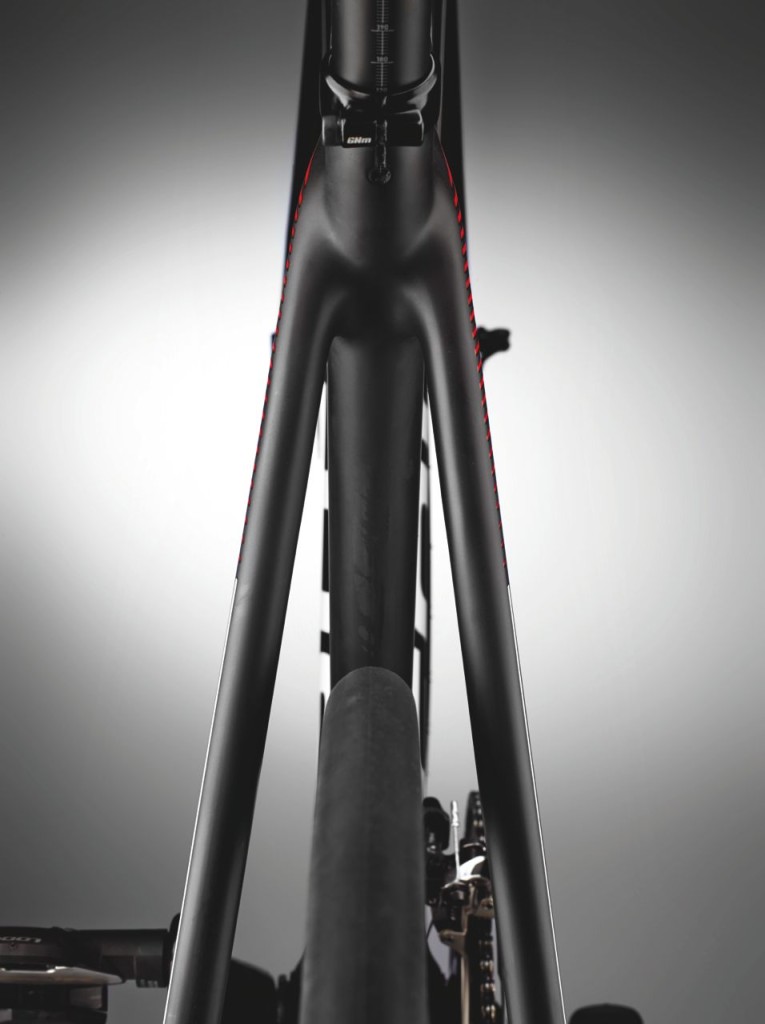 For me, however, the big surprise was the comfort levels on a supposedly beefed-up race bike. The worst of the road buzz is dampened to create a smooth ride, and Focus puts this effect down to the added flex from its CPX seatpost. While the post is a unique design, when I swapped it for my usual seatpost I couldn’t discern any noticeable decrease in vibration absorption. I suspect then, that the seatpost is only partly responsible for the comfortable ride, and as there is no inline option available with the CPX post, I wouldn’t give a second thought to swapping it out if correct fit requires it.

My latest ride on the bike was in some of the grimmest weather I’ve experienced for a long time. By the halfway point the temperature had dropped 11° and it was pouring with rain. I was pedalling along, completely sodden in my summer kit, but somehow I couldn’t help smiling.

I generally despise cycling in inclement conditions, but the one thing that kept me from searching for the nearest train station was the pleasure of tearing down the wet and gritty descents. The peril of descending in the wet with carbon wheels is well documented, but armed with Sram Red hydraulic disc brakes I found myself in complete control, which made the riding fun and fearless. 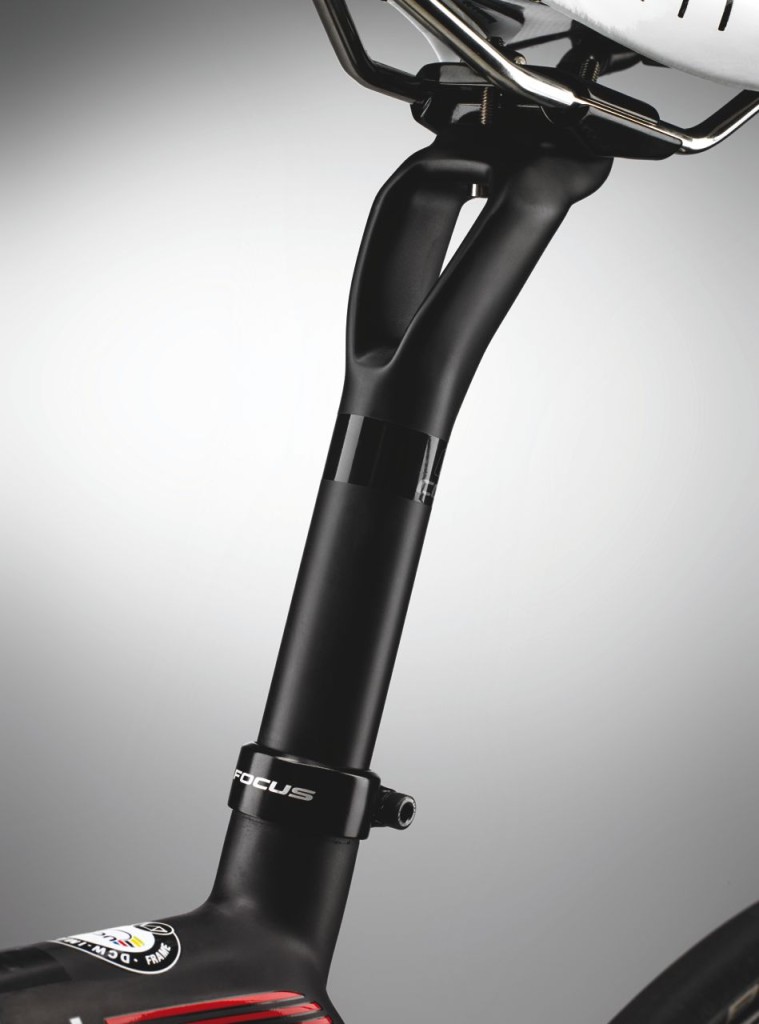 Actually the whole groupset was flawless. I’ve never been a huge fan of Sram Red previously as I’ve always thought the shift quality was lacking compared to the other top-tier groupsets, but it performed admirably in some of the worst possible conditions. As everything got a bit quick towards the end of the ride the fast gear changes were a small mercy during leg-burning surges.

Until recently disc brakes have been the sign of an endurance bike designed for long miles in relative comfort. Now Focus brings us disc brakes on a proper race bike that still delivers in the comfort stakes as well. I’m totally sold, and getting back on my regular-calliper bike felt like a backwards step. But the real test comes next year when the pros make their choice. 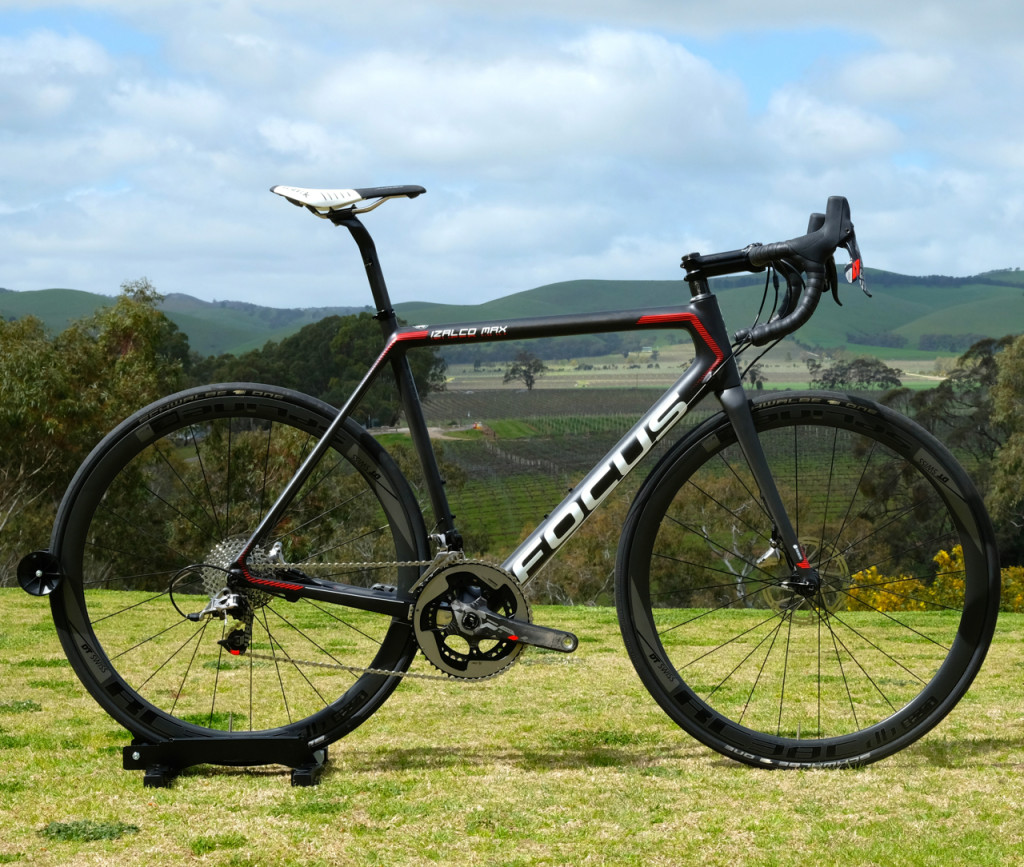 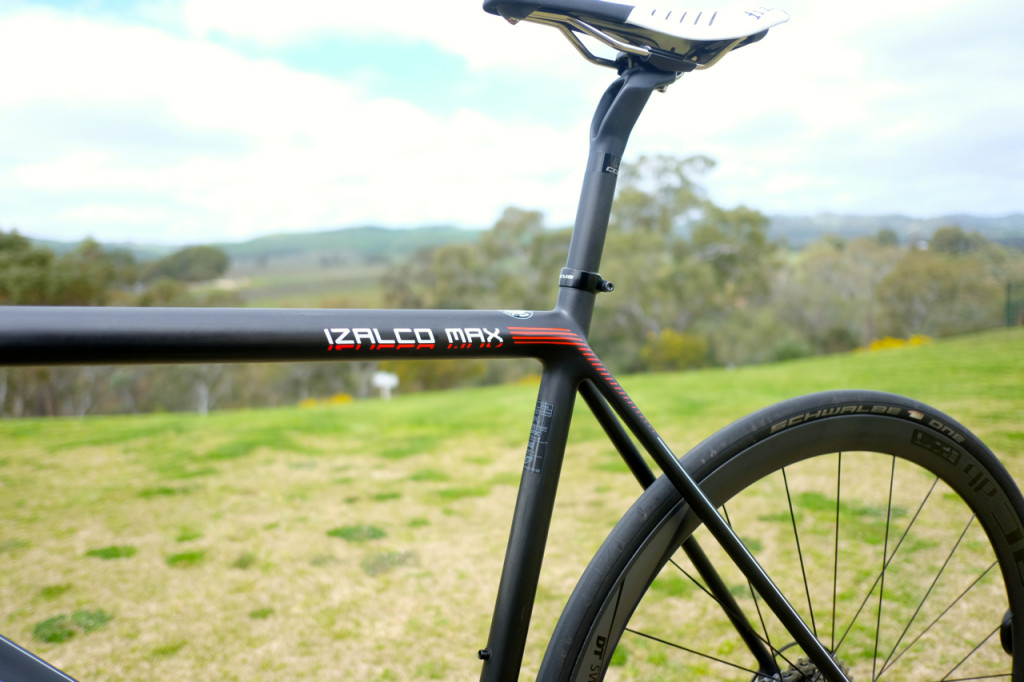 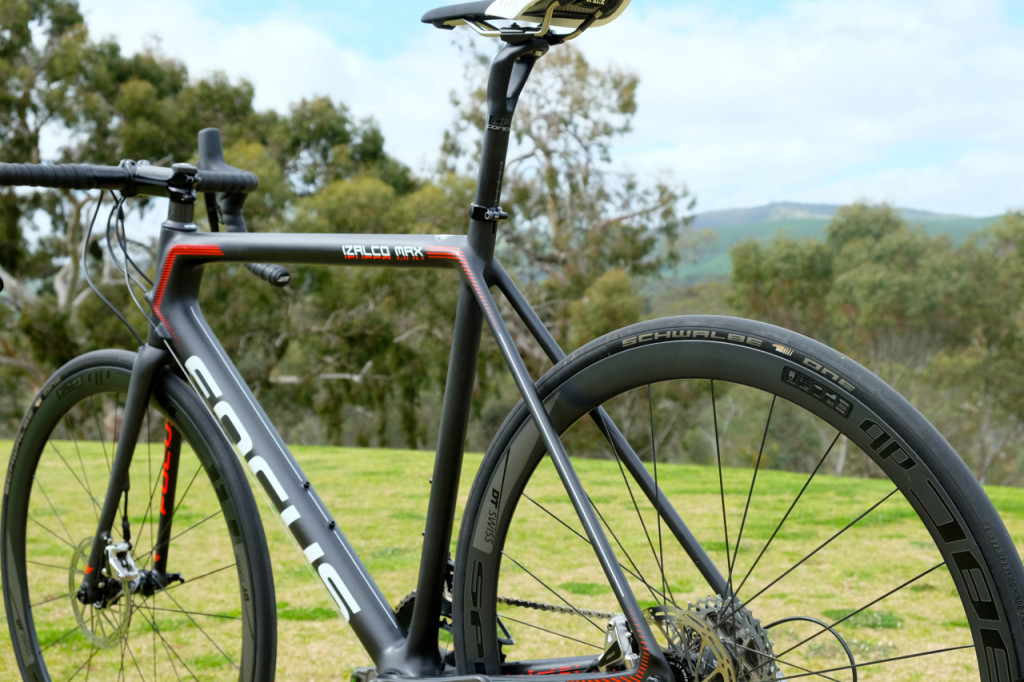 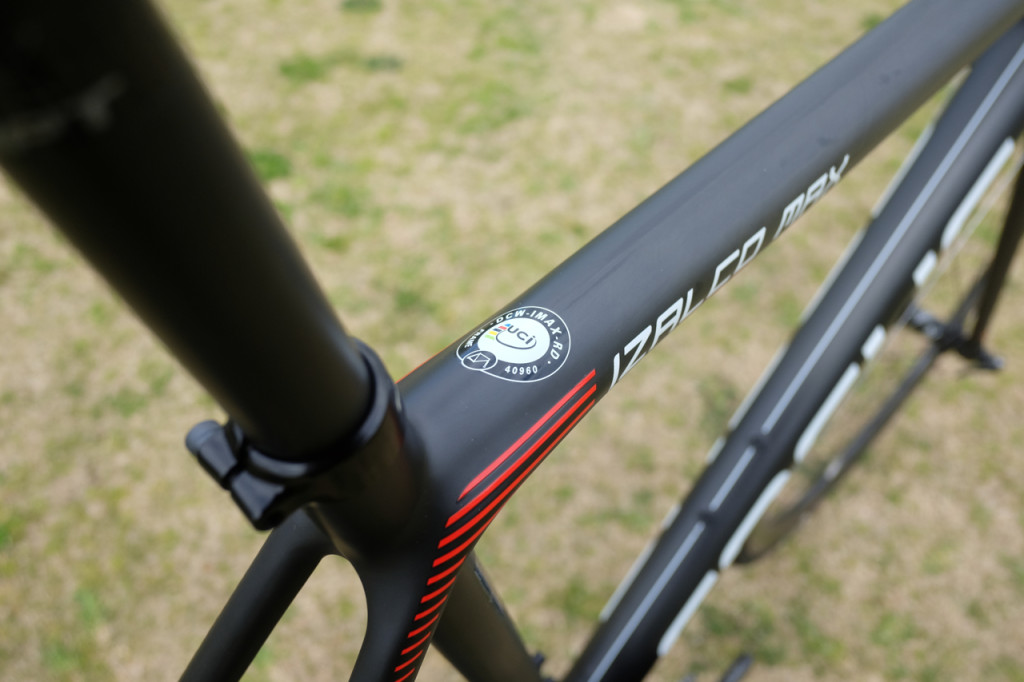 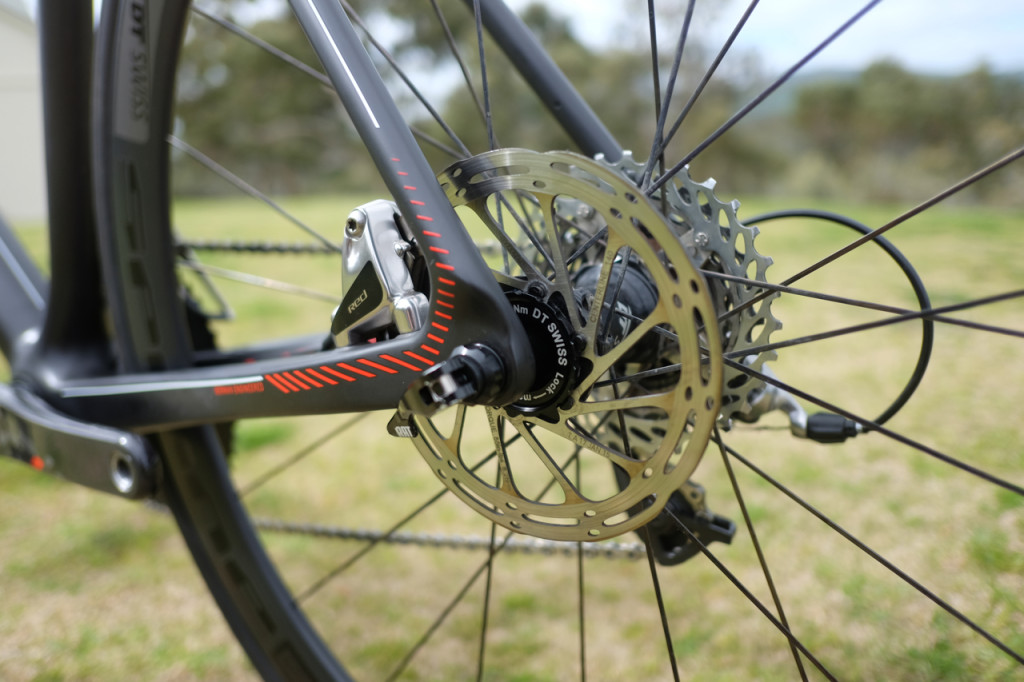 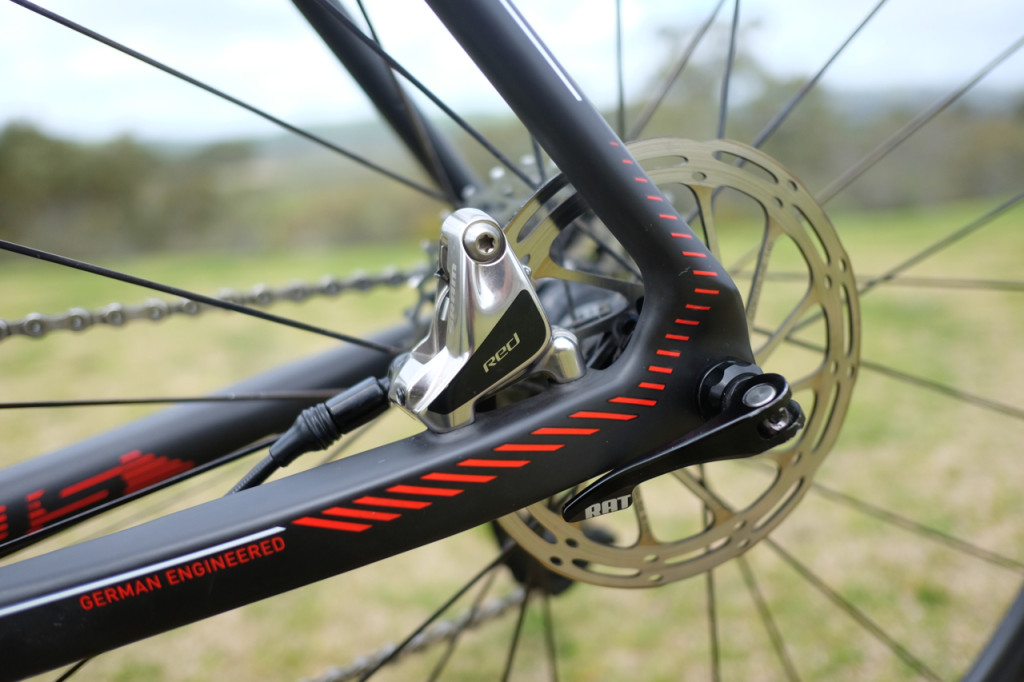 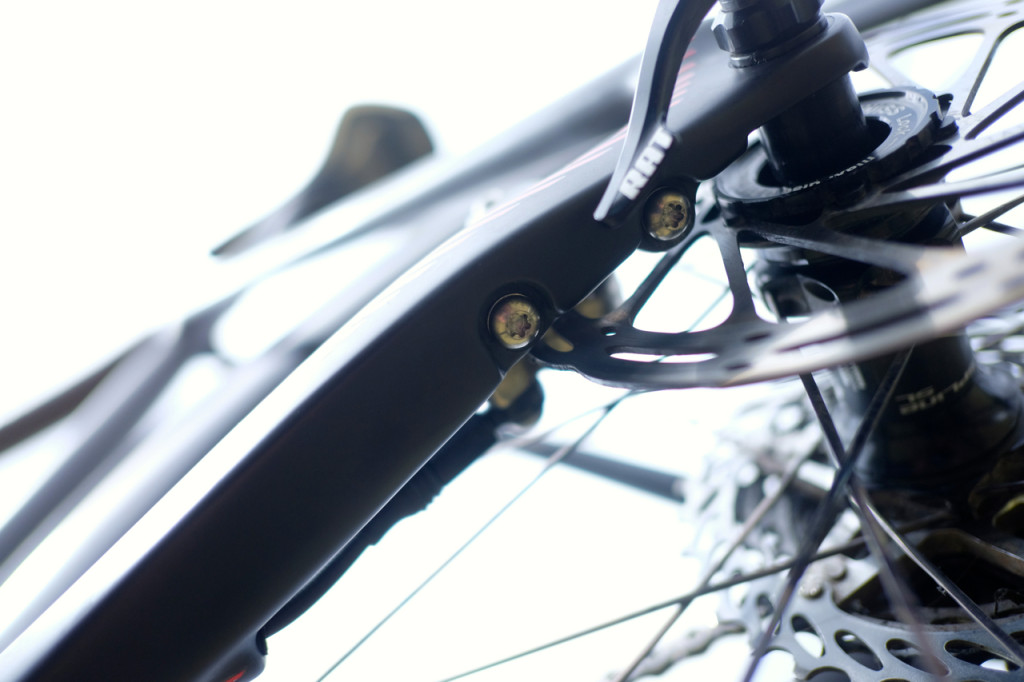 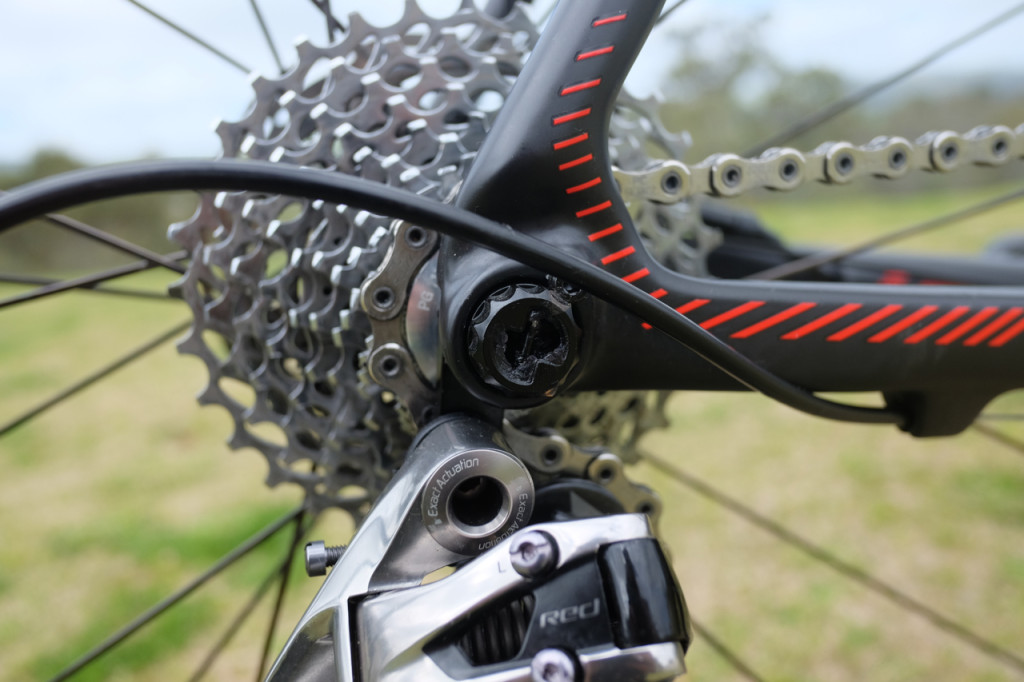 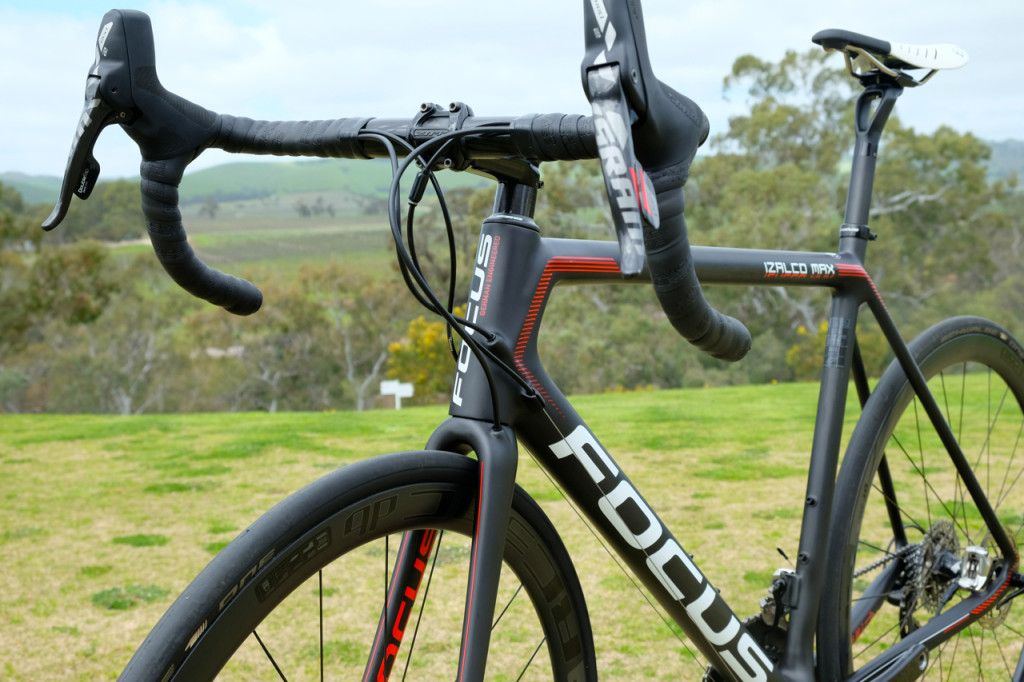 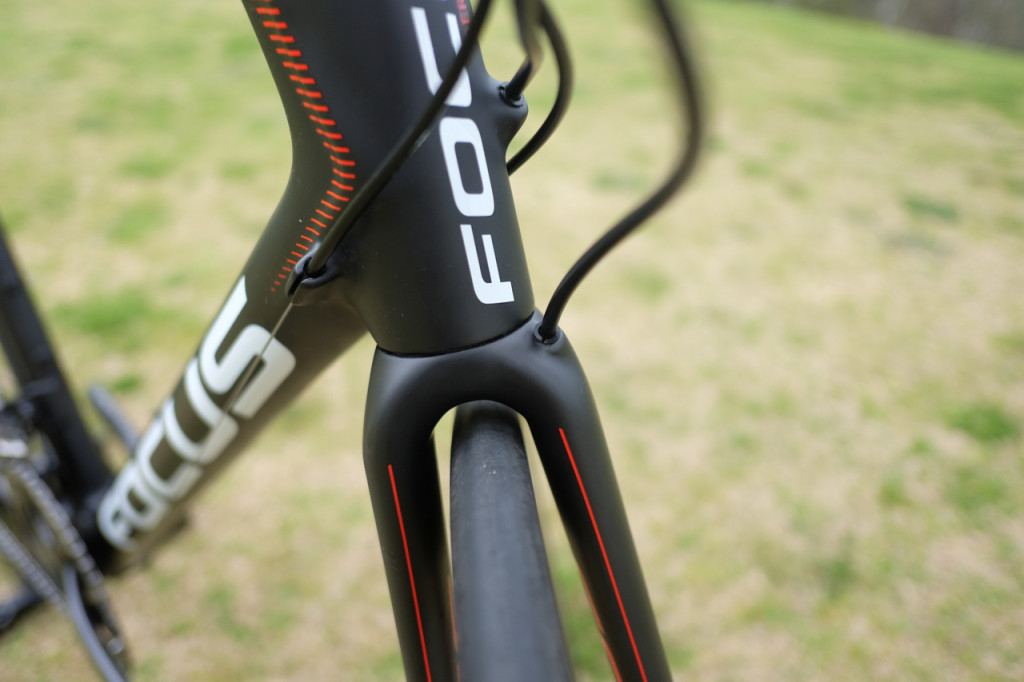 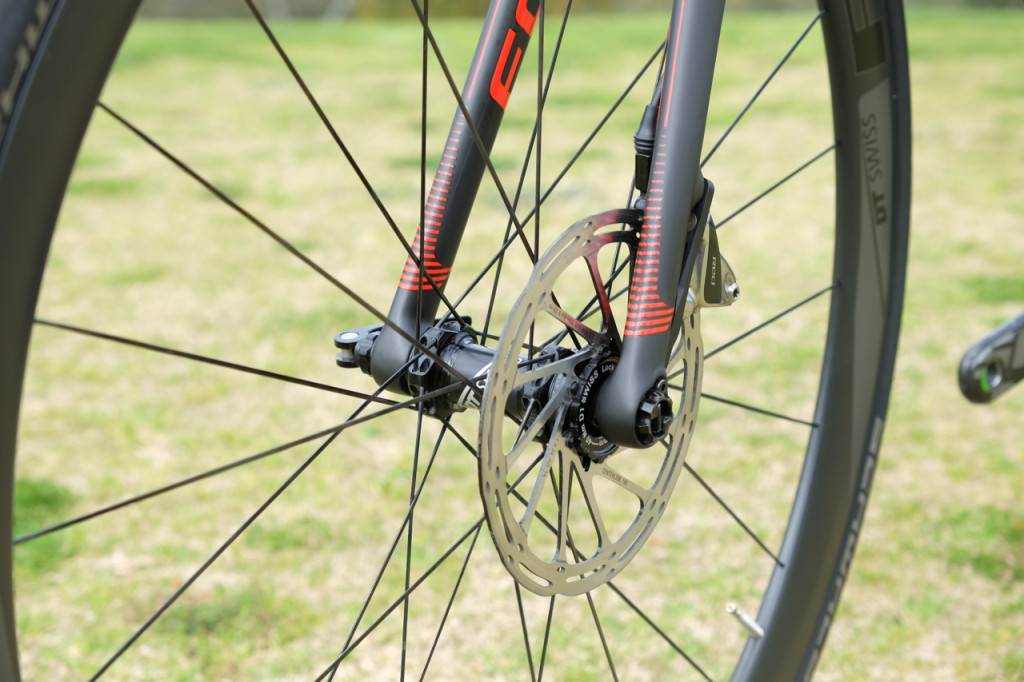 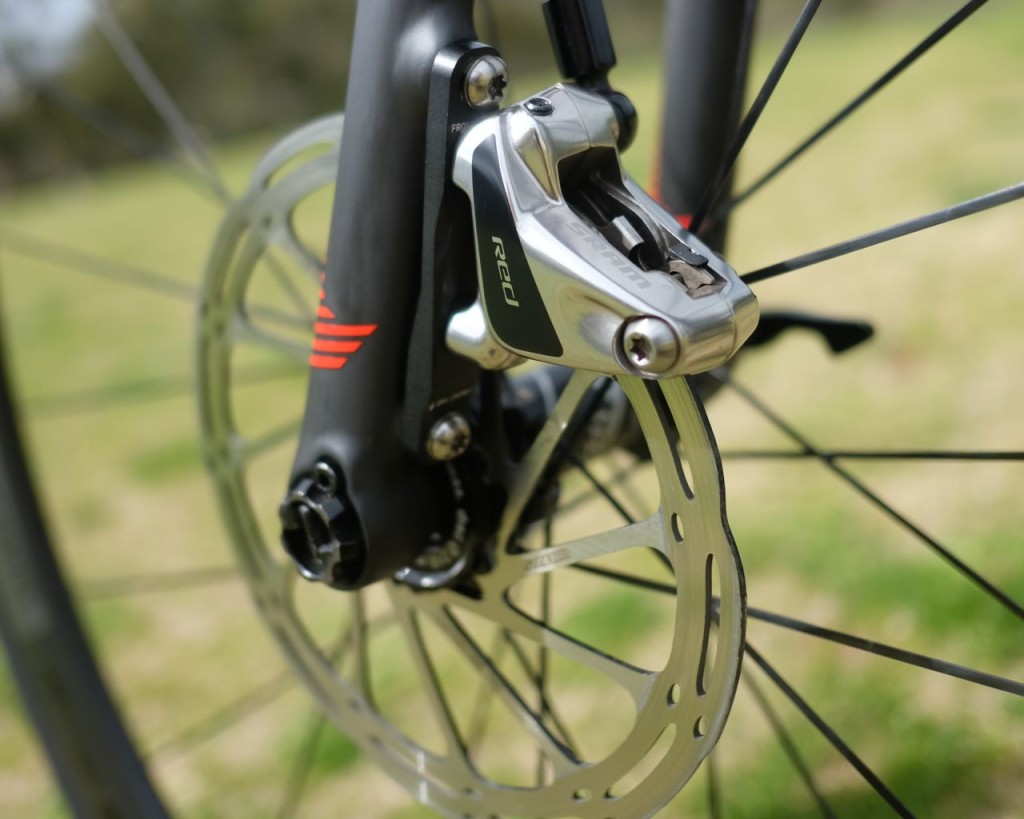 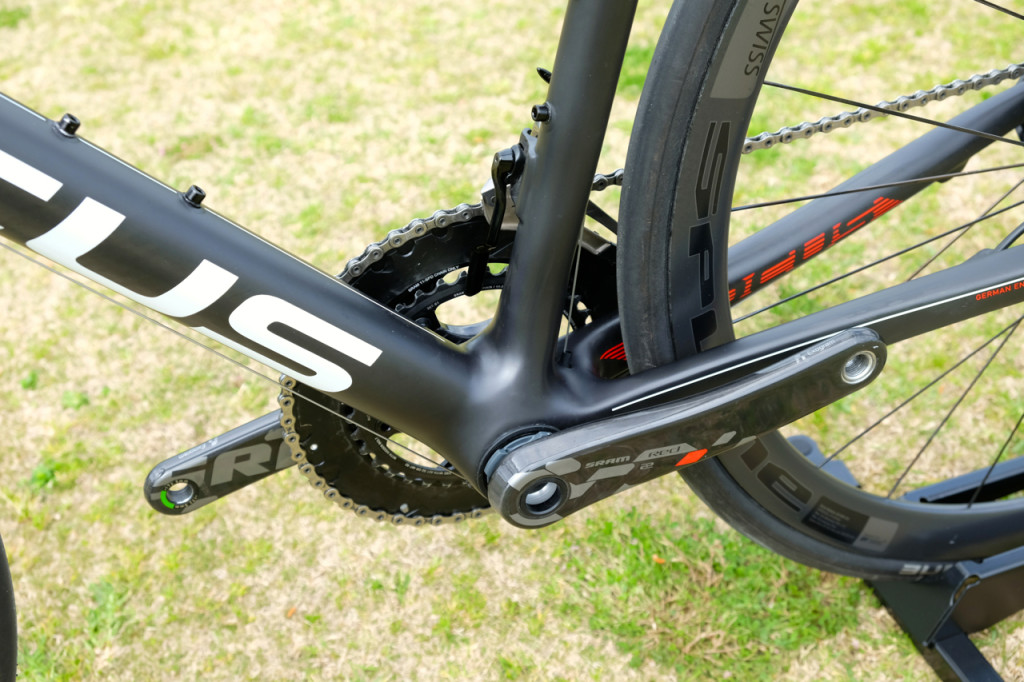 Looking for something a little less race-focused?

Check out the Focus Cayo 3.0 Disc 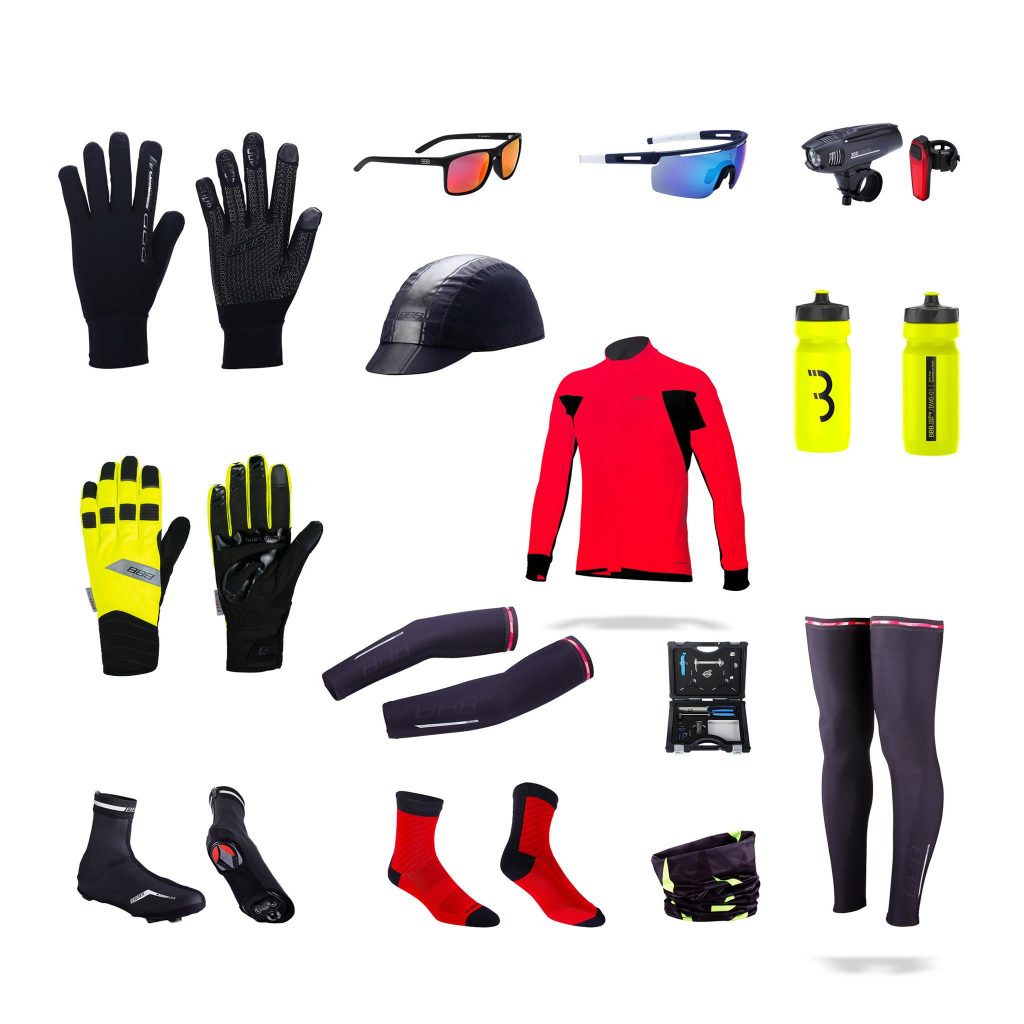 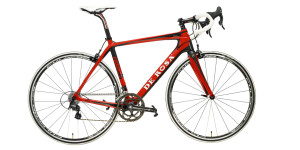