From the most fabled of Italian stables bolts the brand new C60, and it might just be the only bike you’ll need

In 1989, 35 years after Colnago was founded, it was the C35, its first production carbon fibre frameset designed in conjunction with Ferrari. In 1994 it was the C40, which claimed five Paris-Roubaix wins over the next seven years. In 2012 it was the turn of the C59 ‘Ottanta’ – or 80 in Italian – to celebrate Ernesto’s octogenarian year. Now, in 2014, it’s the time of the C60, which, you’ve guessed it, coincides with Colnago’s 60th year in the bicycle business. 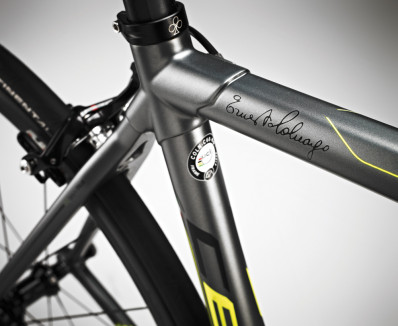 Tube lugs: Iconic and pretty darn pretty it may be, but the C60’s lugged construction isn’t just for show. ‘Working with lugs we can better control the position of the carbon and check the lamination and thickness, which gives us the opportunity to properly tune the characteristics of the frame and increase the strength and crash resistance,’ says designer Davide Fumagalli.

Of course eagle-eyed readers might well ask, ‘What of the C50?’ While it did replace the C40 it was actually officially released in 2003, so in the words of Colnago it ‘lost a chronological sequence in the name’.

In fact 2014 has been a bumper celebratory year for the Colnago stable, with the addition of the V1-r, its first bona fide aero-road bike once again made in conjunction with its old motoring pal Ferrari. (In case you’re wondering at the significance of the moniker, we’re reliably informed that V1 was the name for the folder in Colnago’s filing system that contained plans for the bike. And ‘r’ stands for racing.) But arguably it’s the C60 that’s been the most hotly anticipated of the new breed, and upon which Colnago now pins its flagship colours. In the words of designer Davide Fumagalli, ‘The C40, C50 and C59 were all designed to give the pro teams the best possible frames, and the C60 maintains the very same target: to be the best road bike.’ No pressure then.

Except for forays into aluminium with bikes such as the Dream, and ‘monocoque’ bikes such as the C35, Colnago has built its flagship frames in the tube-lug mode, and there’s no let up with the C60. As with its forebears, the C60 incorporates the company’s iconic crimped Master tubing. But unlike its C-series carbon predecessors, the ‘stellar ribs’ of the Master tubes extend the length of the top tube and down tube and part way up the seat tube (which must end in a round profile to accommodate the seatpost), meaning the lugs also get the crimped shape.

Colnago claims this adds stiffness beyond that of the C59 and, while it’s hard to contest this claim without saws and a degree in composite materials, I’m not going to argue with a man who has built bikes for Eddy Merckx. And if stiffness-obsessed armchair engineers need more convincing, they need only examine the tube diameters.

Where the C59 was packing a down tube that peaked at around 44mm in width, the C60 pushes those limits to 66mm at the point where it joins the bottom bracket lug, and 51.5mm at the end of the seat tube compared
to 34.9mm for the C59. 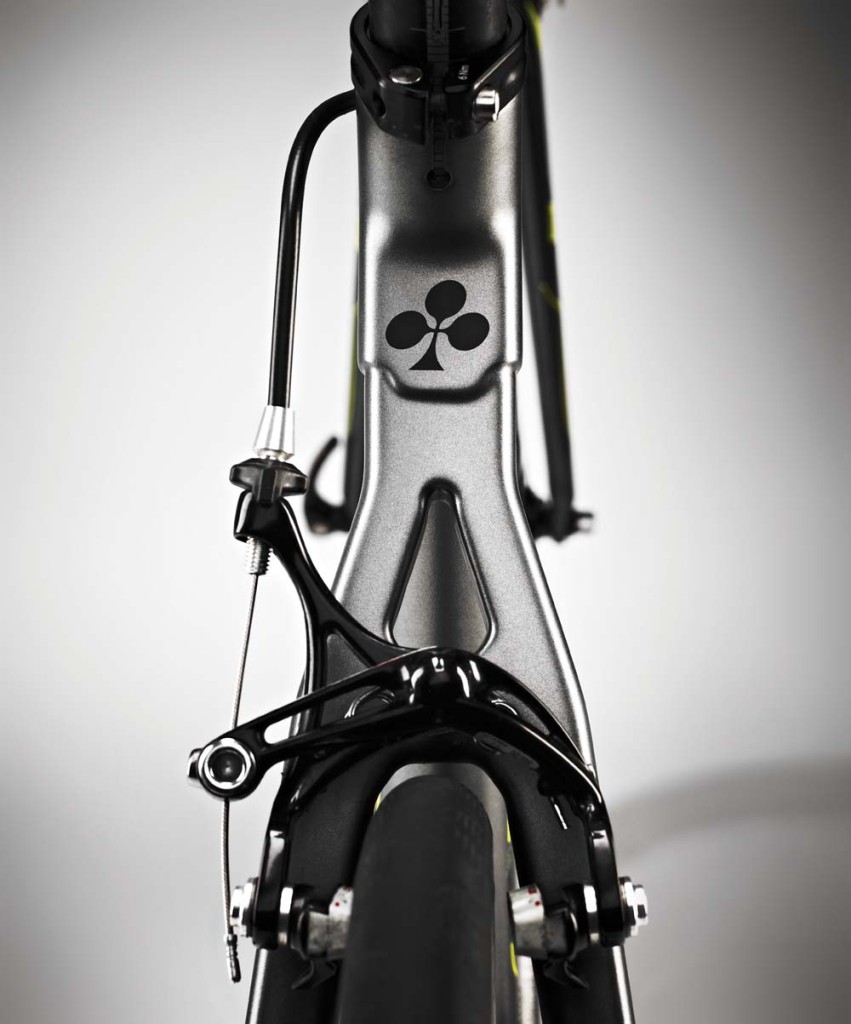 Chunky tubes: The C60’s wishbone seatstays buck the pencil thin trend, yet provide the frame with a surprising amount of compliance.

Oh no… not more BBs!

‘The bottom bracket is probably the heart of this project,’ explains Fumagalli. ‘Making it bigger was essential to being able to use wider tubes, but that meant we’d have to sacrifice our beloved and problem-free threaded BB [since standard threaded BB shells are not wide enough to support the extra tube width]. So we ended up inventing a new BB “standard”, our ThreadFit82.5.’

This leads to the objection that we don’t need yet another BB standard (currently there are eight), but Colnago insists it’s justified. As the company sees it, the problem with current press-fit BB options is that their tolerance fit makes them susceptible to wear that can lead to anything from annoying creaks to outright frame-binning. Replaceable cups are preferable, but up until now have meant external threaded items, which can’t provide structural support to tubes. By making its cups internal but threaded – in other words, replaceable – Colnago has achieved the BB shell width necessary to support the C60’s tubes while proofing the frame against longer-term failure. Which, when the C60 frameset is a dollar shy of $6,500, makes it worthwhile. 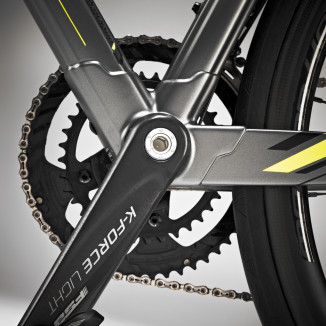 Bottom bracket: The engine room of the C60 is its bottom bracket lug. A feat of precision engineering, it lends the C60 a traditional grace so often absent in modern road bikes.

Can’t get much better

These days it’s hard to find a bad bike, especially in this price bracket, which means it’s actually incredibly difficult for manufacturers to make bikes that genuinely outstrip the opposition. Yet, with the C60, that’s exactly what Colnago has achieved.

For a top-level race rig the C60 is incredibly comfortable yet also very stiff. Undoubtedly the 25c Continental tyres helped mellow the ride a little, even if there’s barely room for a Rizla between the tyre and the rear stays. But regardless, the C60 has a tarmac-hugging, lively spring to it that I’ve rarely found in anything but the best steel racers, but without being in any way flexy. 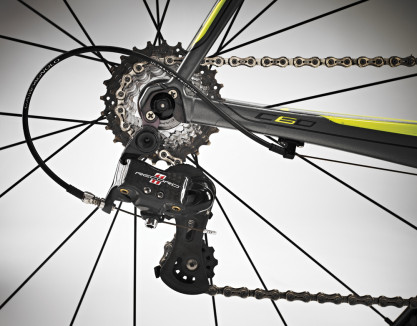 Family values: It’s a brave person who would spec a Colnago with anything but Campagnolo. This Record mech hangs from a CNC aluminium dropout that Colnago says is lighter yet stronger than full carbon.

As a result, handling is borderline sublime. The frame and fork function as if one entity, something particularly welcome through fast, tight corners. Ultimately a bike is only as fast as its rider, but when that bike relays as much detailed feedback through the pedals, bars and saddle as the C60 does, and punches out the power this efficiently through the bottom bracket, that rider can ride incredibly fast indeed. Yet this doesn’t mean the C60 is one of those machines that goads you into things you might not normally do. On the contrary, its handling characteristics are as if it’s asking you, ‘Do you want to go ahead with this?’, only with the caveat of ‘because we definitely can’.

At a claimed 1,050g for the frame in size 50s (and 7.1kg for this built up size 56cm), the C60 might be considered portly by its competitors, but I was hard pushed to notice, even during climbs. No, strike that, particularly during climbs. The initial out-the-saddle stomp doesn’t elicit quite the same reaction as on a lighter bike (the Focus Izalco Max springs to mind), but once the first few pedal strokes are done with the C60 settles easily into a comfortable, perfectly timed rhythm.

If there’s any criticism to level at the C60, I’ve yet to find it. That’s not to say it’s perfect: a bit of extra room to prevent the build-up of gunk between the brakes and the tyres when running 25c wouldn’t go amiss, and being a few bucks cheaper wouldn’t hurt either. But it’s a Colnago, handmade and hand-painted in Italy and with that most prestigious of logos, so really, whatdid you expect?

I’ve been mulling this over and have been afraid to say it for fear of going down the same route as our writer aboard the Trek Émonda this issue – but the C60 is up there with my all-time favourite bikes, alongside my first road bike (I still love you Eddy), the Swift Ultravox and the Storck Aernario Disc (the C60 will be offered as a disc version soon). I’d wager other bikes will one day top it, but for now the C60 stands as the ultimate rider’s ride, day in, day out, fast or slow, quick trips or long hauls. It simply is the only bike you’ll ever need to own. Until Ernesto has another birthday. 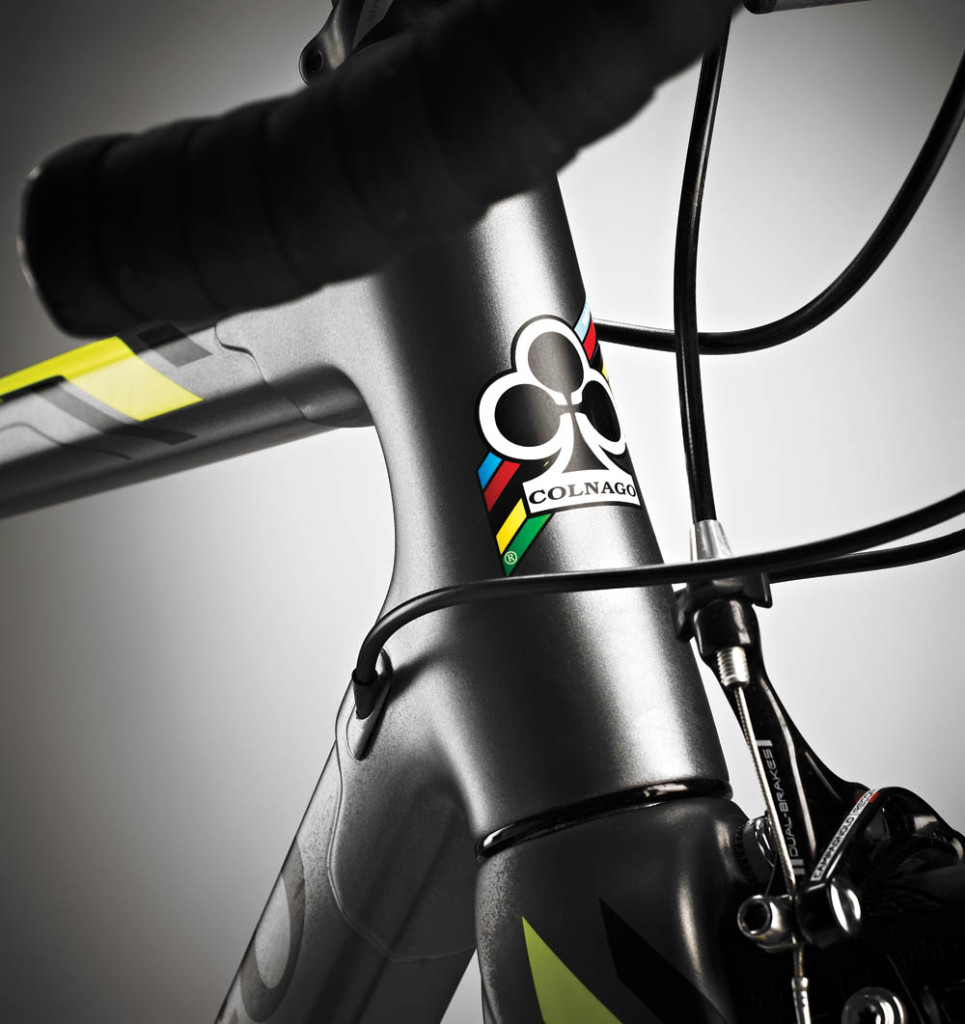 In the detail: A little Colnago trivia… have you ever wondered where the clover leaf logo – the Asso di Fiori, or Ace of Clubs – comes from?It was inspired by Michele Dancelli becoming the first Italian to win Milan-San Remo for 17 years, in 1970. At the time Italian journalist Bruno Raschi wrote in La Gazzetta dello Sport that Dancelli ‘won on a bicycle that was in bloom’, and later Colnago remarked that this was the reason behind the reinvention of his logo, which debuted in 1974 and remains to this day.‘San Remo is the city of flowers,’ said Colnago. ‘And Raschi had written that the bicycle was in bloom, and I was hoping in my heart that I would become an ace in the bike world. As soon as I got home I created the new logo, the Asso di Fiori.’

A bike claiming to be 1,000% more comfortable than its predecessor? That’s either a ...