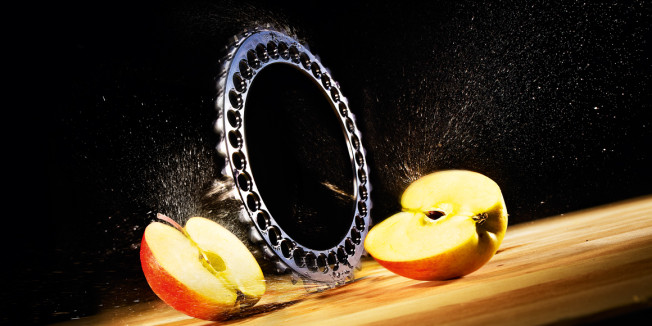 In a world or marginal gains, ovalised chainrings promise more power for less effort. So are they gimmick or game-changer?

Fee speed is the Holy Grail of bike design. Manufacturers pour millions into shaving weight from wheels and shaping tubes to make them more aerodynamic with the objective of making a bike move faster for no extra effort. Yet there is one innovation that has been around for more than 100 years that offers exactly the kind of gains that bike designers strive for, but which has never really taken off in a big way: ovalised chainrings.

We’ll use the term ‘ovalised’ loosely because not all of the offerings (past or present) are oval. They are simply ‘not round’. Instead, visualise the diameter of a circular chainring having been elongated, or stretched in one direction, while at the same time reducing the opposing diameter. Some take this shape to a greater extreme than others, have flatter edges, or are more egg-shaped, but in the main they are oval-like, oval-ish, ovalised.

Two notable British advocates are Bradley Wiggins, who used ovalised chainrings to win the Tour de France and Olympic time-trial, and David Millar. So why isn’t everybody riding around on them? First, let’s look at the theory behind them.

Regardless of the exact shape, all ovalised rings work by the same theory. Christie O’Hara, research specialist with Rotor, producer of ovalised Q-Rings, explains, ‘When you’re pushing down on your pedal stroke, that’s where you produce the most power. When you push down, the Q-Ring goes to its largest radius, so a regular 53-tooth effectively becomes the radius of a 56-tooth in the down stroke, and then when you go through the dead spot, where you don’t produce power at the bottom of the pedalling stroke, it goes to its smallest radius – down to a 51-tooth. The idea is that you’re pushing a bigger gear in the down stroke, when you are at your most powerful and your pedalling velocity slows down at that point, giving more time for your muscles to fully activate and thereby assisting in getting more power. In the dead spot you’re producing less “negative work”, pushing a smaller gear.’

Jean-Louis Talo, French inventor of the O.Symetric chainring, adds, ‘When you measure the force of the leg at the top dead centre when you’re pedalling, your strength is half the strength of your leg when the crank
is horizontal. That’s the reason cyclists are taught to pedal at a high cadence – to get past the dead spot. This is why a round chainring isn’t right for your legs.’

Rotor Q-Rings and O.Symetric are now the two main players in the ovalised market. Many will recall Shimano having dabbled with the concept, called
Biopace, in the 1980s and early 90s, but despite hailing from the stable of the Japanese groupset giant, the Biopace rings had fundamental flaws and riders frequently associated the design with knee pain. Rather than admit it had simply got it wrong and re-think the design, Shimano scrapped Biopace and returned to the traditional world of round chainrings.

O’Hara says, ‘With Biopace, the idea was there but the engineering wasn’t. They put the largest part of the chainring right behind the crank, but they didn’t really think it out. That was creating knee pain and pretty soon
it got taken off the market.’ Talo is less diplomatic in his assessment of Shimano’s attempt at an ovalised ring: ‘Biopace was the most stupid thing I have ever seen in my life in terms of biomechanics. With the crank set up along the biggest radius, you decrease the power, you decrease the speed and you increase the lactic acid. But Shimano had almost a monopoly on the market so it was easy for them to sell it in huge quantities.

O’Hara and Talo may agree on the basic biomechanical theory of ovalised rings, but their respective products are far from being the same.

The shape of rings to come

While Q-Rings are the closest to a basic oval shape, O.Symetric rings are longer than an oval with flatter sides, so more like a rounded oblong. Talo explains it like this: ‘O.Symetric is two symmetrical curves around
a precise point, relative to a central point. The oval is two symmetrical curves relative to the straight perpendiculars. The shape is a mathematical solution – either it’s completely right or it’s completely wrong.’

O’Hara responds by saying, ‘Rotor decided on the shape of Q-Rings based on shifting and racing performance – it’s a compromise between both of those. Ours is a more oval shape because we think it makes for smoother pedalling and easier shifting.’ However, Rotor has recently introduced a new design of ovalised ring that is a more extreme version of the Q-Ring, called the QXL, which was created with input from David Millar.

‘When he initially tried the Q-Ring, he didn’t feel much difference with it – it was like a round ring to him,’ says O’Hara, ‘so he was using O.Symetrics because he wanted the bigger oval, he wanted to feel the greater power. We developed the QXL, where the smallest point goes smaller than a Q-Ring, and the largest point goes larger than a Q-Ring and you get that extra kick that leads to a higher cadence. Millar got one of the first prototypes
and he loved it.’

Shape is only one part of the set-up. The angle of the crank to the ring is also vital to the way the system performs. With O.Symetric, the crank sits at almost 90° to the longest diameter of the ring, whereas with Rotor’s offerings the crank can be adjusted to various angles depending on the rider and the situation. The reason, says Rotor, is that different riders are most powerful at different points during the pedal rotation.

O’Hara says, ‘All riders are different. Some athletes’ muscles activate sooner than others, depending on their fast twitch and slow twitch muscle fibres. Most people will go for position 3, which sets the crank at 108° [to the longest diameter]. With time-trial athletes who are sitting further forward, with hip and knee angles rotated forward, you activate muscles later, so we recommend position 4 on a time-trial bike, which is 113°. For climbers who tend sit further back in the saddle we usually recommend position 2. Changing the position isn’t going to make you stronger or faster – it’s just a different feeling.’

So, do they work?

Unsurprisingly, both O’Hara and Talo claim performance benefits for their products, with O’Hara suggesting that the Q-Rings are also healthier for knees than round rings. ‘There is reduced knee pain with the Q-Ring because your knee is less bent going through the dead spot, thanks to
the reduced chainring diameter. So where your knee is most vulnerable, you’re pushing through the smaller gear. It makes as much sense for the weekend warrior as it does for the pros.’

In terms of improved power, Talo claims a significant 10% increase for O.Symetric compared with round, and says that it’s all down to the unique shape of the rings: ‘To get that 10% power increase you need exactly the
right curves; if you do something slightly different, at best you’ll get 2%.’

Rotor, meanwhile, responds that its new QXL rings, which are a step closer to the O.Symetric in terms of shape than the original Q-Rings, have produced some impressive stats of their own. O’Hara says, ‘We did a 1km time-trial, which was a sub-maximal test. This was pro-level cyclists – not top, but local pros – and they gained, on average, 27 watts more [than using
round rings] and were an average of 1.6 seconds faster, which worked out at a 6.2% increase in power.’

Independent data is hard to come by, so much of the benefit of ovalised rings comes down to personal preference. Mike Veal, owner of bike fitting specialist BikeDynamics, says of Q-Rings, ‘I was curious about them professionally. There’s not a lot of objective data to support them, but I was keen to try them. It took about a month to form an opinion – out on the road or on the turbo there are other factors that affect performance – but I came to like the feel and performance benefit. On the little ring, for example, it feels like a regular 34 but you get the speed of a 36.’

Are there any issues with the pedalling style that riders need to adjust to? Veal says, ‘When you’re climbing out of the saddle, there’s a little jerkiness at the bottom of the stroke as the foot accelerates through the dead spot. Other than that, there’s not a massive change.

‘If someone has a really even pedal stroke and has no problem pushing over the top of the stroke, then Q-Rings could be a waste of time. But if you have any problems pedalling through the dead zones then I might recommend them. But then, I would encourage people to develop their pedal stroke first. It’s not a sticking plaster.’

Is the future oval?

Of course, manufacturers of ovalised chainrings will always talk up the benefits of their products, but it seems that those benefits are genuine (if sometimes overstated), and it’s hard to find data that refutes the performance gains or even find people who just don’t like the experience of riding ovalised rings. So why aren’t we all using them on our bikes?

It could be that people are wary of change, or that there are concerns about shifting performance, but it could simply be that the big groupset suppliers haven’t bought into the concept, most likely because it’s a difficult product to mass produce for quite a specialised market, so it’s rare to see ovalised rings used by professional teams.

Talo says, ‘Members of Team Sky were cycling with O.Symetric, but Shimano was not happy because they were a sponsor of Sky and you can imagine that’s worth millions, so the pressure was massive for those Sky men to get rid of their chainrings. Me, I am not a sponsor. Bradley Wiggins and the other guys bought my rings. People assume I sponsor them but I’m the only one who got paid. It’s very difficult for those on a team to go against their team sponsor.’

Even in light of such notable successes the market remains somewhat divided on the concept. Veal believes the reluctance of riders to take up ovalised rings may be to do with the lack of conclusive data about them, but he also reckons that Shimano’s abortive Biopace project could be the reason why people are nervous about abandoning round rings: ‘Biopace probably set the trend back 20 years.

Ovalised chainrings have been around since 1890. Here are a few notable examples… 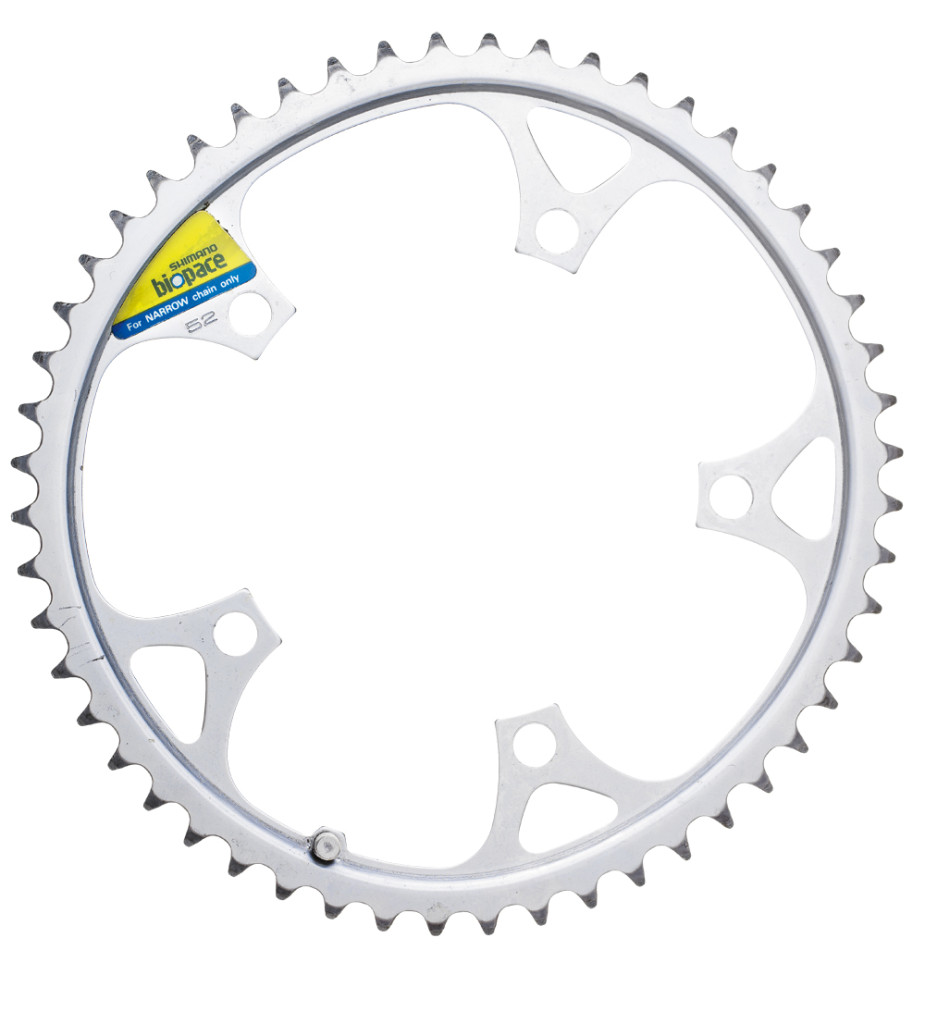 Hit the market in the 1980s, then left it in the 90s when people realised the biomechanical theory was a bit topsy-turvy. 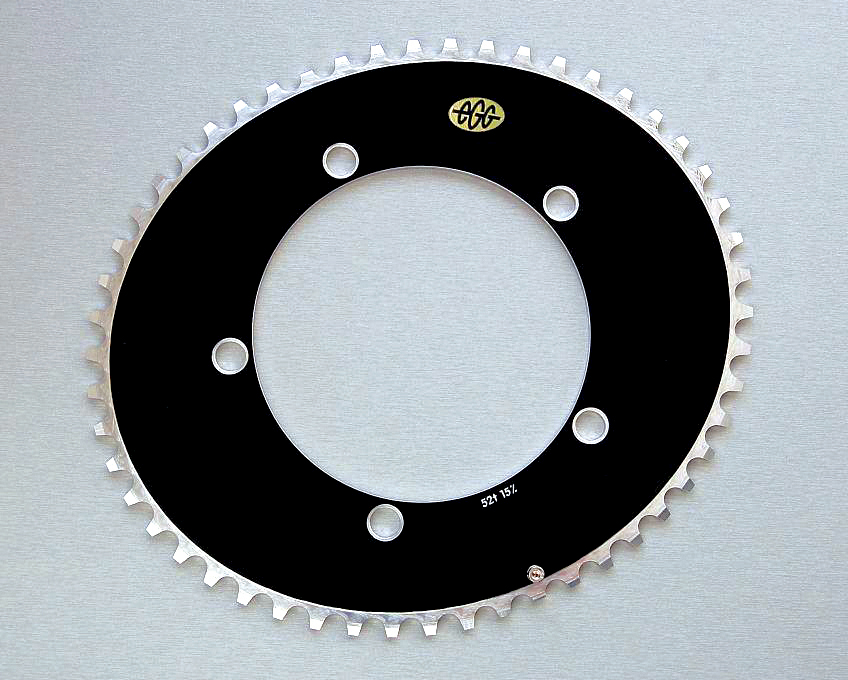 Produced by Highpath Engineering in Wales, Eggrings came in a range of oval shapes and one was included on Chris Boardman’s Olympic Lotus superbike. It seems Highpath has stopped making them. 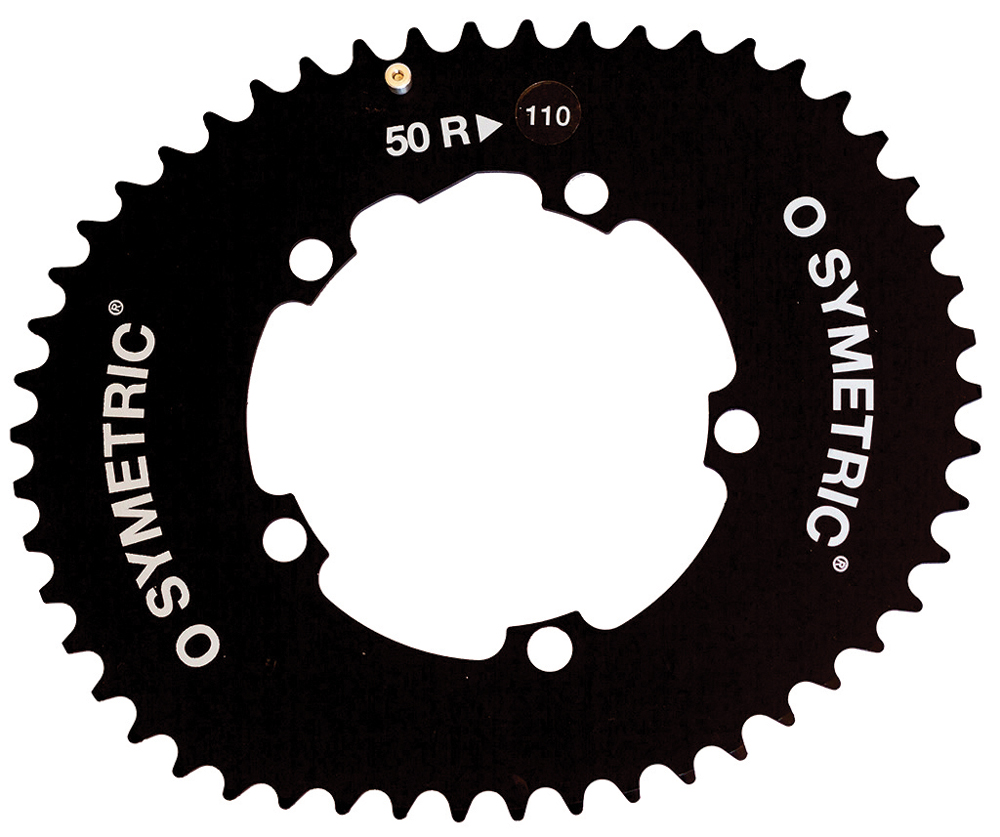 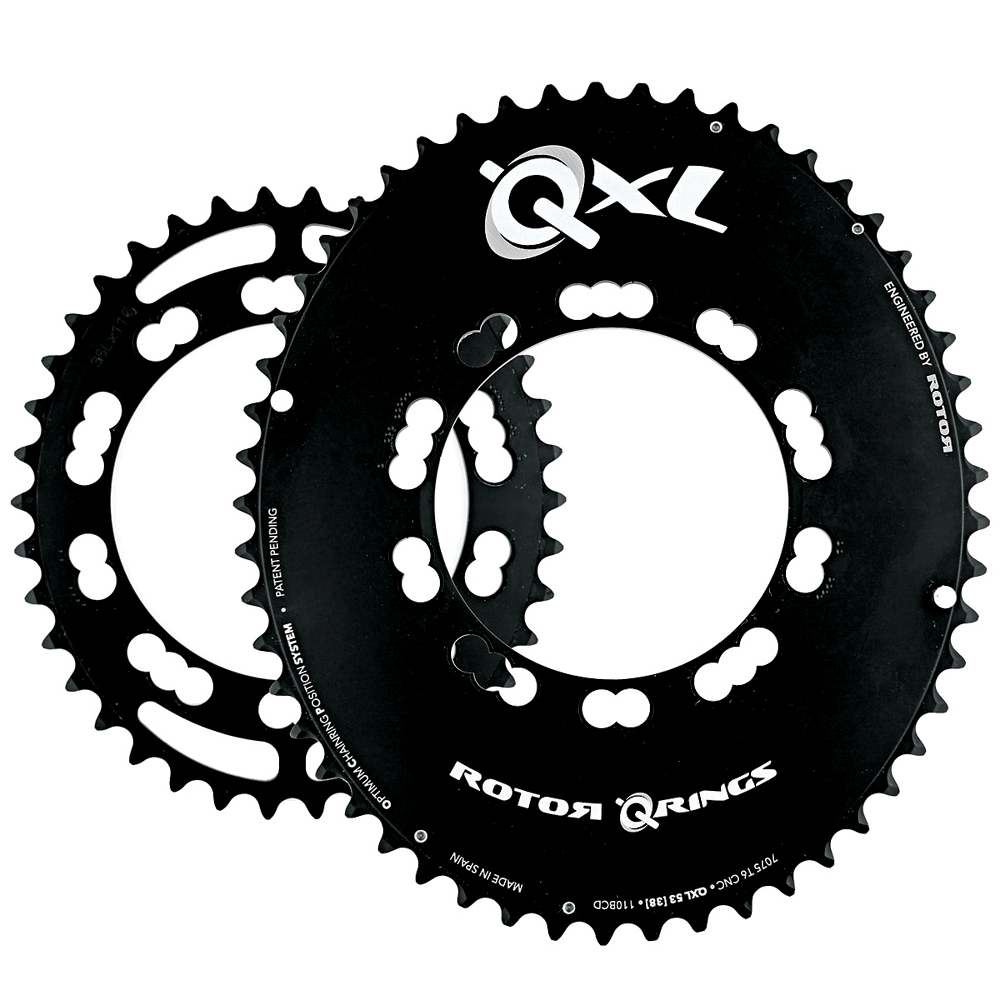 This bigger sibling to the original Q-Ring was launched this year with input from David Millar, who switched from using O.Symetrics. 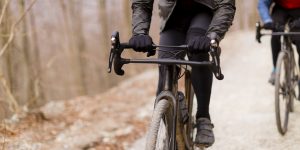 Pushing the limits of its category with a striking design and heightened level of integrat...