All eyes are on Le Tour, Canyon’s ears are too. Highly unexpected, extremely limited, and equally dedicated, Canyon release their homage to Kraftwerk.

The Tour is around the corner and it’s cycling Christmas, product launches are queued up and brands are fighting for presence, Canyon’s comes gift wrapped, an extremely limited edition Canyon x Kraftwerk Ultimate CF SLX. Uniquely this launch heralds no design improvements, it is exactly the same bike as before unlike anything seen before. Fans will recognise the design, a signature geometric pattern originating from the band Kraftwerk, it’s founder Ralf Hütter and Canyon founder and CEO, Roman Arnold’s memories of “partying in friends’ basements” to their music.

For those asking what all the fuss is about, it is understandable, krautrock and 1970’s German experimental electro isn’t for everyone. For those who know, this is unexpected but not implausible. Kraftwerk’s last studio album was released almost fourteen years ago in 2003, titled Tour de France Soundtracks, celebrating the 100th anniversary of Le Tour and recorded in Kraftwerk’s Kling Klang Studio in Düsseldorf, the location of this year’s Le Grand Départ. Is it starting to make sense now? 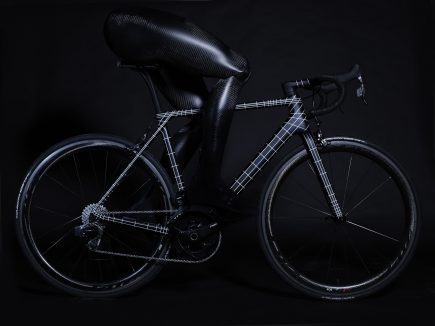 Kraftwerk’s passion for cycling is of legend, Hütter and original co-founder Florian Schneider would reportedly exit the tour bus early to ride between gigs. Their slow production was blamed on their pursuit of spending hours training instead of in the studio, a collision whilst training with his race team even left Hütter in a coma. The obsession didn’t end, they incorporated recordings of gear and componentry sounds into their 1983 single ‘Tour de France’, more recently performed inside Manchester Velodrome whilst Geraint Thomas and other members of Team GB cycled laps.

Geraint Thomas may reminisce, but cycling’s own Man-Machine Tony Martin will get the honour of the rainbow stripes and a Canyon x Kraftwerk Speedmax in Le Tour’s opening TT. Martin’s Speedmax will be a one-off, only the Ultimate CF SLX will be available to the public, almost as rare with 21 models produced. Each reflective geometric pattern is hand-laid and the most complex design Canyon have ever undertaken. The finishing kit includes SRAM eTap and Zipp 303 Firecrests, delivered with a unique Canyon Bike Guard and commemorative pack (Mannequin-Machine not included). 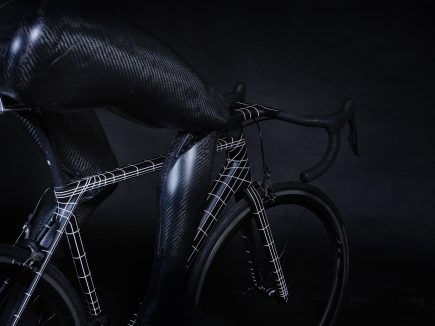 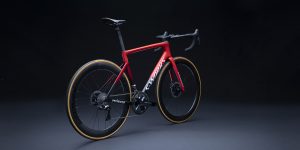