It’s fair to say that Chris Boardman knows a thing or two about aerodynamics. It is, after all, his knowledge of this precise science that helped him to many of his career highlights, such as Olympic pursuit gold medals and the world hour record. He’s spent more than his fair share of time scrutinising ways to minimise air resistance, so it’s not surprising it’s reflected in his bike range too.

The AiR platform is the result – Boardman’s range of slick, wind-cheating road bikes. Hot out of the mould for 2013 is the AiR/9.2S Di2, Boardman’s first model made specifically for Shimano’s Di2 electronic shifting components.

I’ve tested several Boardman bikes previously and I’ve not ridden a bad one yet. From entry level to top-end, the bikes have always faired well in tests, and without fail offer a spec that’s hard to beat at the given price points.

In the beginning, that was perhaps because Boardman needed to work hard to establish the brand, and bring the bikes to attention of the cycling world, so adding some extra value to the sale was a means to achieve a jump on the competition. But it’s well beyond that now.

The brand is now firmly established and, to Boardman’s credit, the range has not wavered from offering a really high spec and finishing kit. Certainly on the AiR/9.2S there’s no sign of any corner-cutting. Ritchey WCS bar and stem, FSA SLK BB30 carbon chainset and a titanium-railed Fizik Arione saddle are all desirable, functional and appealing – and all worthy companions to the Shimano Ultegra Di2 groupset. Boardman’s own branded carbon aero seatpost is pleasingly user-friendly too. Making adjustments and fine-tuning the saddle position is very easy.

I was also pleasantly surprised to see Vittoria’s Open Corsa CX 320tpi tyres fitted. This top-spec rubber is superb, and doesn’t come cheap, but it’s a much- appreciated investment because its suppleness compared to cheaper tyres brings a certain smoothness and grip in terms of the ride feel. It’s rare to get treated to this, even on bikes of this price. It all points to the Boardman, once again, being excellent value for money. Chapeau, Mr B.

Asked why it has taken until now – some time behind other manufacturers – to get on board with frames to work with electronic shifting, Boardman replies, “We were keen to ensure we could provide product for all of our customers, so we continued experimenting with designs until Shimano released their Ultegra level Di2.” That speaks volumes about Boardman’s attitude, and highlights that he is concerned with creating usable bikes, and not with rushing to follow trend.

During his pro career, Boardman is known for having used (probably more than any other pro at the time) the Mavic electronic shifting systems of the 90s. As such, he is well aware of the benefits and pitfalls of electronic gearing. Some 15 years on, Boardman’s view of the latest systems is that they are “a dream to use, now that reliability seems to have been vastly improved. And the addition of the front mech self-trimming is excellent.”

I wouldn’t disagree with him. The shifting quality and precision of the Ultegra Di2 is indisputably impressive. Shut your eyes and you’d be hard pushed to tell its functionality apart from the Dura-Ace level kit. Really only the bulk, both in terms of aesthetics and weight, stand the Ultegra apart. One aspect I particularly like is the shape of the lever hoods. It’s a personal thing, but the slimmer ergonomics – made possible by not having to house loads of mechanical shifter internals – and the softer, textured rubber hood improves the ride feel.

Boardman’s engineers have made a neat job of routing the electronic cabling. There’s just a small hole in the headtube for the cable to enter, then it’s unseen again until it reappears at the various exit points, which are equally small and as close as possible to the battery and front and rear derailleurs. All the cable entry/exit points are protected and sealed by neat rubber bungs – one of the tidiest examples I’ve seen to date.

What’s noteworthy here is that Boardman’s engineers, I’m informed, did not simply drill holes to make way for the cables. The holes are in-moulded to maintain the structural integrity of the carbon fibres. The battery is aesthetically and practically mounted on top of the left hand chainstay (out of harm’s way) with a very neat cable run, and the cable for the front mech is well located too. However the cable exit for the rear mech had to be positioned some way down the right hand chainstay, which while practical in terms of engineering by not giving rise to any problems with making holes in key load paths, it’s not as attractive as elsewhere on the frame.

Once you’ve experienced the Di2 groupset, chances are you won’t want to go back, but it’s worth noting that the option isn’t there with this frame. There are no interchangeable cable guides to enable a return to mechanical shifting – something we’ve seen on some frame models from other manufacturers.

How does it ride?

Our medium sized AiR/9.2S test bike weighed in at a shade over 16lbs (7.3kg), so hardly a heavyweight. It certainly doesn’t feel anything other than spritely and agile out on the road. Something I look for in a bike is front end rigidity when you transfer your bodyweight up and forwards, such as sprinting or climbing. I like a bike to feel solid beneath me, and the Boardman does a great job in this respect. This usually translates, assuming no geometry slip-ups, into responsive and predictable handling too, and again I was not disappointed.

The beefy chainstays, reaching rearward from an equally beefy BB30 bottom bracket, were never likely to budge much under my mass and power output, so you’ll be rewarded for stamping hard on the pedals too. From a personal standpoint the sizing and geometry of the AiR models is not perfectly compatible with my ‘best fit’. The medium size’s 55.5cm top tube is on the short side for me, plus I don’t feel Boardman’s been overly generous with head tube length, at 14cm, resulting in quite a low-slung front end. Meanwhile the large frame size’s 57cm top tube would have been too long.

I appreciate that this is by no means a reflection on the bike’s performance, as sizing is completely down to the individual, and to be fair, it’s an aero road bike, so more aggressive positioning could arguably be expected, but I felt my dilemma might sound familiar to others too. These are minor gripes. If I had to give Mr Boardman a dollar for every significant fault I could find with this bike, then he’d be very poor and I’d be dollars in. 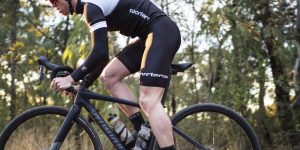 Build it and they will come. Specialized are not ones to shy away from a challenge, and th...