It’s known as the ‘City of Churches’, but Adelaide is also becoming renowned as the best city in Australia to ride your bike. It’s a big call. But the reality is that in late January every year, when the European-based professionals roll in for the Santos Tour Down Under, there is no better place to be a bike rider than in Adelaide. Where else can you head out for a ride in the hills with world champion Philippe Gilbert, or spin the legs along the coast with Simon Gerrans or Matt Goss? Where else will you ever see legs the size of Andre Greipel’s?

A lot of credit has to be given to race organisers for building the Tour Down Under into a world-class bike race that most professionals actually look forward to attending (believe it or not, pros actually dislike a lot of races). Its location, nestled in between the beach and hills, simply makes Adelaide the Mecca of Australian cycling. 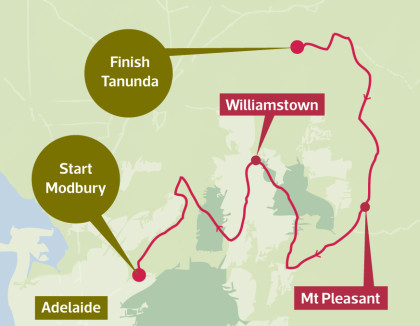 When: January 2014, Stage 4. As yet, there is no date or course published for next year’s event, so keep checking the website for information.

Sign up: All ride information, including how to enter, can be found on the Tour Down Under website. As with all of these events, sign up early as they sell out fast.

The best climb is up to Mt Lofty along Greenhill Rd. It’s 10 kilometres long at an average pitch of just over five per cent, and the longest climb you’ll find in the Adelaide hills, followed by a fast and thrilling descent.

Two special short climbs are in and around Basket Range and Marble Hill. The descent, and then a short climb out of Basket Range along Adelaide-Lobethal Rd in particular, is amazing. The twisty, tree-lined road with very little traffic is a joy to ride, and definitely one of the best roads anywhere.

But for die-hards, Old Willunga Hill is simply one of those iconic climbs that you need to do just so you can tell people you’ve done it. At just three kilometres in length and 7.4 per cent gradient, you may just want to do it twice (pros do it thrice)… but our bet is that you won’t.

As the official event partner and headquarters, the Hilton Adelaide, located in the CBD, is most certainly the heart and soul of the TDU. For sheer convience, it’s hard to beat. From there, you don’t have to go further than five kilometres before you’re climbing. The beach is only around five kilometres from the other side of the city, so if you want to relax after a hard day’s riding and look out over the water, Henley Beach or Brighton are great places to stay.

Cyclist’s top pick is Mount Lofty House. Located just 15 minutes from the CBD  in Crafers, the award-winning hotel features breathtaking views of the Adelaide Hills, it is considered a year-round playground for cyclists – but with only 33 rooms, you better book early!

Europa at the Bay, situated in busy Moseley Square, is considered Glenelg’s premier dining destination and is very popular with cyclists. Just a stone’s throw from the Adelaide CBD, the restaurant caters for those needing a quick espresso hit or a gourmet breakfast, or those who prefer a contemporary European dining experience. Cyclist tip: try the Linguine al Granchio!

Read more in Cyclist, full feature article in issue one 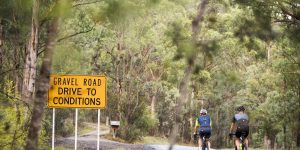 Rugged, rocky and remote – that was the description given by NSW National Parks. What w...