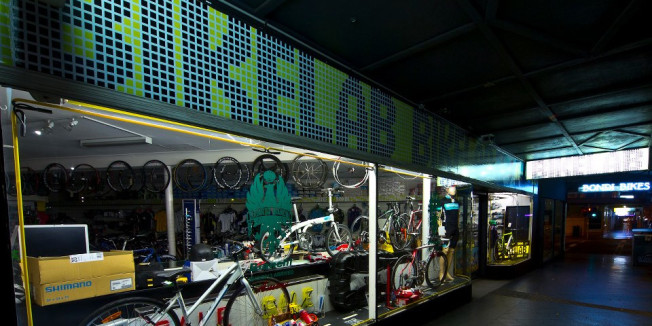 BikeLab’s Liam Kelly on drugs in cycling, being cool and Orlando Bloom

We opened in September 2007. Good timing, huh! Then the bottom fell out of the retail industry and global financial climate took a nosedive. I was importing Colnago and Kuota at the time and decided to retail, rather than wholesale because no one was operating a “pro” shop with a sports science approach to fitting, testing and training. I wanted to setup a culture of excellence and performance and to showcase bikes that you couldn’t find in the big four-branded shops. Apart from an obnoxious owner (wink), we are a great choice.

Can’t really mention too many names, but let’s just say I know people [Orlando Bloom]…Basically our stores are located in St. Kilda in Melbourne and the eastern suburbs of Sydney so we deal with people that can be famous for being – demanding.

In one word, BondiBikes is just ‘cool’. Basically, I’m cool and I want to export our style to the world.

In my opinion, the Sydney or Melbourne cycling scene is dominated by a few major factors: oversupply, discounting, s**t roads (thanks AusGrid), overcrowding of certain bike routes (like the madness that is Centennial Park between 6am and 7am in Sydney and Beach Road in Melbourne on a Saturday), not to mention all the horrible bike fits I see 98 per cent of people suffering from. I also find the current trend of paying to ride in squads utter madness, but I understand one has to start somewhere so it serves a purpose, I guess. I could talk for hours on each subject, but my real gripe is that sports science is ignored but critical to performance.

Drugs in pro cycling is giving every person who rides a bad name and categorising supplements as banned substances is unhealthy for non-pros. That’s the unintended consequence of a paranoid and zero tolerance approach to sports science in pro sports.

As a society we vaccinate, we employ fluoridation, we take antibiotics, we are amazed and in awe of stem cell research and gene manipulation, we research longevity and promote supplements to make you feel better and live longer and stay mentally healthy. And then we tell athletes that there may be a performance effect so you can’t use any of them. You can’t have vitamin supplements delivered by needle and you can’t compete on anything even if you’re not a pro or you will be shamed and banned and called a cheat.

Lance Armstrong is a d**khead. He’s an idol for d**kheads. The problem with our society is idolising anyone, let alone someone like him. He lost me when he gave ‘The Look’ to Jan Ulrich on L’Alpe-d’Huez at the 2001 Tour de France. Did I mention that he is a …

On the upside, I see fantastic growth of women in cycling, especially good looking ones. Oh, and kids are getting off the scooters and back on bikes. Did I mention the women?

The local racing scene is good and looking better, but racing in winter is stupid. Which idiot thought of that? Get racing back into summer and let’s go skiing in winter please!

I don’t ride a bike for transport. It’s only for racing. It’s a competitor’s sport. I’m a competitor and an athlete. I see myself always competing in sport and racing till I die.

I don’t think many bike shops will be around, at least I don’t think we will. It’s changing rapidly. We will only survive if we have margin, and to retail and offer ‘service’, you either need to charge for service or have margin to cover the service charge. As we unbundle service from product, that will fundamentally change the retail offering.

I hate when customers have the approach that we are ripping them off. Nothing could be further from the truth, but if you screw me, then…

The most common question I get is ‘what size bike am I?’ First thing you do is visit a good bike shop. There are heaps now. A bike that fits you perfectly is a cheaper bike to own than an ill-fitting cheap bike.

Colin Levitch sat down with Jeremy Peterson the owner of Venture Cycles to chat about moun...