Posted on September 18, 2015 by Cyclist Australia/NZ

It’s the favourite pick-me-up for pro riders and amateurs alike, but how much coffee should you drink, and when’s the ideal time for a hit?

It was Mark Twain who said, ‘Golf is a good walk spoiled.’ And although you might not agree that ‘cycling is a good coffee stop spoiled’, that little brown bean is so beloved of many riders that you can see where we’re coming from.

‘Coffee is endemic in the culture of cycling,’ says Nigel Mitchell, head of nutrition at Team Sky. But the good news is that, unlike cakes, pastries and full English breakfasts, it’s a treat that won’t negate all your hard work in the saddle. In fact, coffee is going to help it.

‘In nutritional terms, it’s popular because it’s a great source of caffeine, which has multiple benefits,’ Mitchell says. ‘It helps mobilise fatty acids, has a direct effect on the central nervous system and it helps release calcium, which aids muscle contraction.’

Nutritionist Sarah Schenker says, ‘Fatty acids in the bloodstream give you fuel at high intensity because they increase fat oxidation and spare the muscle glycogen that would otherwise be used for energy. Caffeine also boosts concentration levels and lessens your perception of effort. It won’t make you fitter, but up a big hill it can diminish the feeling of effort.’

Caffeine gives you a mental boost by blocking the body’s uptake of adenosine, a chemical present in the central nervous system that, the longer you’re awake, causes tiredness. Technically, caffeine is classed as the world’s most popular psychoactive drug. That doesn’t mean your saddle will turn into a marshmallow and your handlebars into snakes if you have too much of it – although it is possible to take on too much.

One cup or two?

‘There’s a lot of mixed information on caffeine,’ says Mayur Ranchordas, senior lecturer in sport and exercise nutrition and physiology at Sheffield Hallam University. ‘The problem today is that there are so many variables in health. Coffee is fantastic, but many cyclists do over-consume it.’

The diuretic effect of caffeine (its tendency to promote the production of urine) is widely known. There are different kinds of diuretic however, and caffeine is a type known as xanthine, which inhibits the absorption of sodium and interferes with hormones that regulate urine production by the kidneys.

‘Caffeine can decrease the time water takes to leave the body,’ says Schenker, but this is not necessarily a problem if you cycle a lot. ‘The need to urinate is diminished when you exercise because adrenaline turns down the signals to your bladder, but you may find that you need the loo if you don’t time it right. As with any type of sports nutrition, you have to experiment to see what works for you.’

‘Studies have shown that standard coffee contains enough fluid – water and/or milk – to negate the diuretic effect,’ says Ranchordas. ‘But that can change if the fluid content is lower. If you have too many espressos it could have a diuretic effect.’ Essentially, it comes down to the volume of fluid.

‘If you’re having a large and relatively weak coffee, you’re balancing the fluid lost because of the caffeine by taking on more fluid,’ says sports nutritionist Drew Price. ‘What you leave behind the tree doesn’t necessarily tell you
about your hydration levels. Compare a two-shot Americano with a double espresso. Having the espressos might not actually make you pee more but when you do you’ll be more dehydrated as you’ll not benefit from the extra water in the Americano. Caffeine isn’t as diuretic as originally thought, because in earlier research they often didn’t take into account the amount of fluid in the coffee. Taking on board plain water will cause you to pee.’

As Schenker says, there’s a degree of trial and error, but there’s another good reason not to have too much of it. ‘Athletes adapt to caffeine,’ says Ranchordas. ‘The more you have, the less the benefit. One way round that is to stop having it four or five days before a race, then reintroduce it on race day. You’ll get a greater benefit when you need it.’

‘My advice is to save it for when you need it,’ Price says. ‘A cup or two a day is fine and probably of benefit health-wise. Performance-wise 6-9mg caffeine per kilogram of bodyweight is best for most of us but after that problems can start. Too much caffeine can cause loss of coordination and concentration, the shakes and heart palpitations.’ None of which are ideal when negotiating traffic or other riders.

There are, of course, many different types of coffee, which all have a different concentration of caffeine. ‘If you’re going for a leisurely ride it doesn’t really matter what coffee you have,’ says Schenker. ‘But if you’re about to start a race or hard session it’s worth having espresso for the concentrated caffeine.’

That’s not the only option though. Precise amounts can vary hugely depending on the bean and the barista, but a double espresso averages around 120mg of caffeine. A standard Americano is roughly the same but has more fluid. ‘Instant coffee contains around 30-50mg per cup,’ Price adds, which makes it less beneficial once you’re on the bike.

‘Pre-ride, you want to boost your plasma caffeine levels around 30-45 minutes before you start,’ says Ranchordas. Plasma caffeine is, quite simply, a way of measuring how much your body has absorbed. ‘Have coffee 45 minutes before if the event is short, but if you’re about to start a long, six-hour race have it closer to the start. You never know when a breakaway might form and you’ll want to be as sharp as possible for as long as possible. 300mg of caffeine – around two and a half double espressos – stays in your blood for between 90 minutes and two hours.’

Caffeine, incidentally, doesn’t just come in coffee and can be taken on board when you’re riding in the form of tabs such as Vibe Gum, which contain a mix of vitamins, mint and caffeine in gum form, which makes for fast absorption. ‘Halfway through a two-hour ride it’s worth having a caffeine boost,’ says Schenker. ‘Also, sports drinks are starting to include caffeine in them for this reason.’

Yet cyclists don’t just want caffeine. We drink coffee because it tastes good and it’s part of the culture of our sport. As Team Sky’s Mitchell says, ‘If we tried to get rid of it there would be a riot.’ 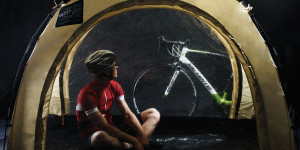 The pros have a long history of training at altitude, but can the ordinary rider benefit f...