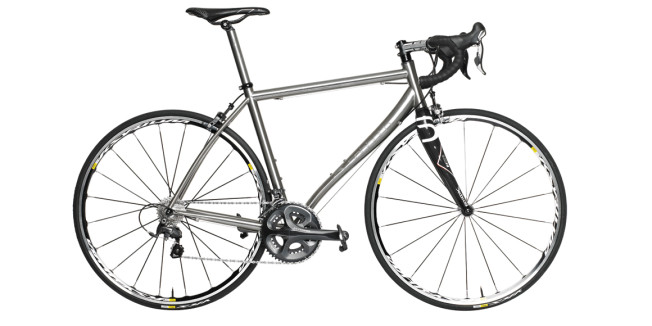 Argue all you want about the missing apostrophe, but one thing’s for sure: Mondays Child is fair of face

‘We wanted to have a titanium bike that’s designed to be ridden, and that can blow away the myth that ti is for old buggers like me’

Taking its name from the mythical Titans, titanium has always been famed for its strength and endurance, just like its deity namesakes. So the club elders would say buy a titanium bike and you had a comfortable, robust ride that would outlive even your grandchildren. But the world is a cruel place, and where once titanium was considered ‘exotic’, the stuff of jet engines and Mars rovers, developments in carbon have seen its lustre fade. Of course it still appears regularly on spec sheets for derailleurs or cassettes, but as a choice for a top racing machine, are you serious? If your name’s Sabbath, yes.

‘Mondays Child is targeted at the performance end of the market,’ explains Sabbath’s owner, Andrew Rink.‘We wanted to have a titanium bike that’s designed to be ridden, and that can blow away the myth that ti is for old buggers like me.’If that was the brief, the blueprint certainly has the potential to deliver. The first thing you’ll notice when clapping eyes on the Mondays Child is the wavy down tube and convex seatstays. Although tube manipulation beyond mere extrusion has been around for a number of years – the use of ‘bendy’ concave seatstays being something of a staple among the likes of Serotta and Litespeed – employing convex seatstays is more radical.

The very nature of a curve positioned like this means the rear of the bike naturally wants to stay planted on the floor – something totally at odds with concave seatstays, which operate like a leaf-spring. But being made from 3Al2.5V titanium (or grade 9 – a medium-strength titanium alloy), I had my reservations as to how well this design would play out, given the metal’s propensity to flex. As it turned out these reservations were unfounded.

The Mondays Child stated its case when being ridden over one particularly scarred road. Ignoring my cycling partner up ahead, who was pointing out potholes with the verve of a semaphore operator, I took the opportunity to test the Mondays Child’s mettle and pedalled a straight line through the rough stretch. Instead of the bike feeling sluggish, as with overly compliant bikes, or skipping about, as with those more rigid, the Mondays Child managed to tread a welcome middle ground. In such instances I would tend to expect more comfort from a titanium bike over carbon or aluminium anyway, but the way in which the rear end managed to track the road’s undulations was impressive, the material itself seeming to control the rebound, like the dampening of a shock absorber.

Of course all this springiness might be problematic elsewhere in terms of responsiveness and handling, particularly in a bike with a traditional 68mm bottom bracket shell, which has little real estate upon which to build the boxy tube junctions associated with lateral stiffness. However the Mondays Child has another trick up its sleeve: the excessively ovalised ends of the down tube. While I’m still dubious as to the whether the twists and bends at its middle add anything beyond aesthetics (without a saw and a microscope I’m unable to confirm Rink’s assertion that this contortion ‘compresses or expands the molecular structure of the alloy and thereby stiffens it’), it’s true that an ovalised profile will have a greater contact area, since it intersects along the whole width and height of the bottom bracket shell and head tube, instead of just at the centre, as a round tube would.

The result was that big efforts fed into the frame without the feeling of power loss that plagues some titanium bikes. I would be reluctant to describe the Mondays Child as stand-out stiff, but with the high-tensioned Mavic Ksyrium Elites between the dropouts it fought its corner well when being made to kick hard up inclines or accelerate quickly out of corners. It also descended in a lively yet predictable fashion, with just the right amount of feedback; that is, enough to know what the road’s trying to tell you, but not so much that you’re left wishing you’d wrapped an extra layer of

tape over the bars and worn two pairs of bib-shorts. Like the Ksyriums, there are other aspects of this build that really help the Mondays Child’s cause. Although soon to be out-dated with the advent of the 6800 series, Shimano’s Ultegra 6700 chainset still does an excellent job of shifting power through the drivetrain and into the wheels (though it’s worth noting that when the new groupsets land, Sabbath will offer the Mondays Child with the latest iteration, at a to-be-confirmed price). Similarly the aluminium Pro PLT cockpit is superbly rigid, while Deda’s Black Fin fork tracks with a smooth precision through the corners, aided by the super stiff head tube that Sabbath machines from a single piece of much harder 6Al4V(grade 5) billet.

If I did have a couple of issues it was with the USE seatpost and Pro stem. Beautifully finished the seatpost may be, but it was a pain to set up and allowed the saddle rails to slip during my first outing. The issue was resolved by slightly over-torquing the bolt, but nevertheless I’d rather not have to stop mid-ride to readjust a saddle. Similarly the Pro PLT stem has an overly finicky split clamping mechanism where the four-bolt face plate comes apart in two halves. It’s not the end of the world, but did cause some first-install cursing.

In fairness those are very minor gripes, and don’t detract from all the reasons why Sabbath should be immensely proud of its offspring. There will still be
those who will remain unconvinced about titanium’s relevance in the midst of so many fantastic carbon bikes, but to those I’d say go and test a Mondays Child. You might just be converted.

For more of the latest bike previews subscribe to Cyclist at: magshop.com.au/Cyclist or via iTunes https://itunes.apple.com/au/app/cyclist-australia/id602436026?mt=8. 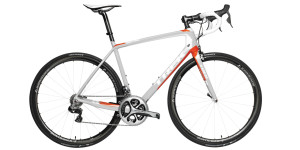 Since its launch a year ago, the 7 Series has had a few tweaks. The question is: is the re...