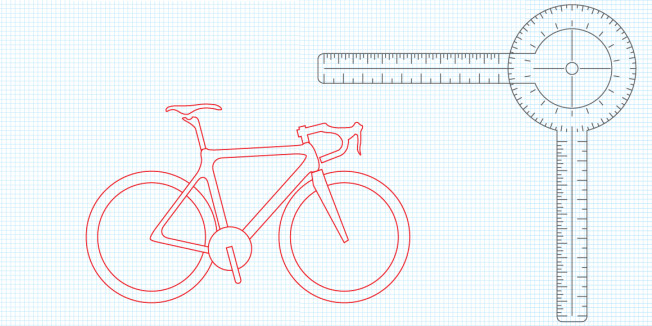 The long and short

Getting your bike to fit you perfectly is vital for performance, comfort and injury prevention. So how come most people are getting it wrong?

Since the 1990s, fitting a bike to its rider has been a matter of arithmetic. You take your leg measurement, add your shoulder width, subtract the length of your ear lobes, divide by your age and – hey presto – you’ve got your saddle height. Or something like that.

Every bike shop, website and manual has its favoured method for finding the correct set-up. Want to know your frame size? It’s your inside leg multiplied by 0.685. Want to know your reach? Add your torso length to your arm length, divide by two and add ten centimetres.

It’s the way most cyclists will still set up their bikes, but there’s a problem. As Scherrit Knoesen of The Bike Whisperer says, ‘Reality is slightly more complicated than we’d like.’

That’s why hi-tech bike-fitting services are popping up like mushrooms after rain. They include systems such as Retül, which uses infrared markers on the rider’s joints to capture movements in 3D. Or there’s SICI, a system from American bike guru Ben Serotta, which includes a sophisticated stationary bike that can be  micro-adjusted with a rider in the saddle, as well as motion-capture video software and pedalling analysis.

When a bike fit is going to set you back up to £200, it’s nice to have lots of computer screens and video cameras, but is it really the case that a machine can tell you the perfect fit for you and your bike?

The simple answer is no. All the technology is there to make the fitter’s job easier but, as physiotherapist Phil Burt says, a system such as Retül ‘doesn’t tell you your position. It’s just a measuring tape.’ The skill and experience of the fitter is paramount.

What’s the secret of a good fit?

‘I don’t think you can get a brilliant fit until the fitter has worked for at least a year,’ says Knoesen. It’s an opinion echoed by all the fitters we spoke to. The process is part science, part art, but mainly it’s about experience. There is no simple formula to suit everyone for every situation.

‘The more people you’ve seen, the more problems you’ve solved,’ says Burt. If you want to know whether you’ll get a good service, Burt says the question you
have to ask is, ‘How many people have you fitted?’

And it’s not just experience that counts, but relevant experience. ‘If you’re setting up a time trial bike, you want to be aerodynamic, so you want a fitter who’s spent a lot of time in a wind tunnel,’ Burt says. ‘But if you’re getting frustrated because you can’t get beyond 50 miles at the weekend before your knee pain comes on, you want to see a physio with bike-fitting experience.’

Phil Cavell, director of CycleFit  and a pioneer in the field of bike fitting, agrees. ‘It goes wrong when a fitter tries to be the sole guru and takes on too much,’ he says. ‘We take a collegiate approach, working with osteopaths and physiologists. That’s how we’ve learned what we know.’

Knoesen adds, ‘I have loose associations with a lot of health professionals. You may find as early as the first hour of a consultation that your bike fit is going to be a Band-Aid and you need to sort out underlying problems.’

So how do fitters find out what their clients need? ‘It’s all about the conversation,’ says Mark Murphy, who runs the Specialized BG Fit programme. There’s an initial discussion of the rider’s cycling, medical and injury history, goals and aspirations and any problems they are trying to solve. ‘The first 15 minutes of my fit process is talking and I’m always asking questions,’ says Knoesen. From there, some fitters take body measurements, fit shoe insoles or test flexibility to build up a picture of the rider’s body and how a bike will best fit them.

Then it’s time to ride, on a turbo or an adjustable fitting jig, at a range of intensities. That’s where issues surface. ‘A lot of people are beautiful at low loads, when they are pootling along,’ says Knoesen. ‘But as soon as you load them up, their dysfunctional patterns come to the fore.’

The bike is then adjusted to the rider. This may involve a simple process of adjusting fit aspects in sequence or may require tweaking the same aspects several times because of what Burt calls the ‘multi-factorial’ nature of bike fit: changing one thing can affect others. ‘In a few cases you can find you’re making tiny changes, balancing, say, knee pain against back pain,’ says Cavell.

Finally, you should come out with your bike set up correctly or clutching a set of measurements that will allow you to adjust it yourself. You will also be up to $300 lighter if you go for one of the video-based systems and get a three-hour fitting. If that seems like a lot, think of it as the price of the three or four high-quality tyres you get through in a season, but the benefits are more lasting.

Who needs a fitter anyway?

‘A proper fitting is essential for most people and vital for some,’ says Cavell at CycleFit. ‘Most people will feel benefits in power or comfort. For some it will
allow them to ride when they previously couldn’t.’

Burt believes that there’s a spectrum of rider types from ‘macro-absorbers’ who can cope with pretty much any sensible position on the bike, to ‘micro-adjusters’ who are very sensitive to the nuances of bike fit.

There’s broad consensus in the bike fit community that you’re more likely to be one of those people in the latter category as you get older because of natural ageing and also because we’re less active. ‘If you spend 80 per cent of your life behind a desk and only 20 per cent going hard at the weekend on a bike, the 80 per cent probably has more of a toll on your body,’ says Burt.

Rapha Condor Sharp rider Dean Downing is an advocate for bike fit after having his injury problems alleviated by former pro rider-turned-fitter Adrian
Timmis, owner of Cadence Sport in Staffordshire. ‘I’ve had back pain since a crash about 15 years ago,’ says Downing. ‘It shows up after a big block of hard
training or racing. Having a bike fit combated that – I don’t get the problem as often now.’

It’s not just about fixing injuries though. Ben Hallam of the Bespoke Performance Lab in London says all types of riders can benefit from being properly fitted. ‘Whether you’re a racer or someone who just wants to ride at the weekend, both will get more out of their riding if they are more efficient and powerful. The racer wins more races, the leisure rider feels better going up hills and is able to achieve goals easier. Both of them need to have a level
of comfort, especially on the racing side of things.’

Should you go it alone?

CycleFit’s Phil Cavell is unequivocal. ‘It can’t be done. The worst thing you can do is go on “feel” because much of it is counter-intuitive. You need a referee and that’s our role,’ he says. Other fit experts believe there are things you can do to tune your own bike position.

‘I think the Italian “pedal back” method to set saddle height is a good starting point,’ says Murphy. ‘Set the height based on your straight leg extension when your heel is on the pedal. Pedal on a trainer so your heel is just in contact with the pedal and you can backpedal without rocking your hips. That should give you a starting point for saddle height that’s 80 per cent sure of being right.’

Jez Loftus, who oversees Trek’s bike fit training, thinks riders can help themselves by working on flexibility and core strength. ‘If you want to get into a high-performance position, do some stretching and core work.’

If you’re getting saddle sores, it could be a sign that you need to adjust your fit. Burt says, ‘People who are twisted on the bike nearly always have saddle sores
on one side. That’s a clue you might have a leg-length discrepancy and, if so, it’s worth investigating further.’

One aspect of fit you can probably take care of yourself is handlebar width. Ben Hallam suggests you ‘measure from the acromion process straight across to the other acromion process. That’s the part of your shoulder where you push on the bony part and it drops off to the outside to the soft part. Your bars should be roughly that width.’

Whatever changes you make to your own position, it’s important to track them so you can see their effects. ‘Keep good records, change one thing at a time and
give each change time to settle in before you accept
or reject each change,’ says Knoesen.

Bike lore is stuffed to bursting with rules and ideas for how you should set up your bike. Some of them have a grain of truth, but others are useless – even
dangerous. ‘The number one myth we struggle with is the myth of the upstroke,’ says Cavell. Pulling up uses ‘a very small and rather fragile muscle group, and trying to train this motion leads to lots of problems’.

Research shows that trying to pull up is hazardous, and studies have shown that top riders don’t pull up. ‘The dominant force is the leg going down the other side,’ says Burt, adding that he believes you can’t influence pedalling stroke. ‘It’s like walking – it’s parked away in a part of your brain you can’t reach.’

The idea that comfort and performance are mutually exclusive grates on fit experts. Pro riders cover 3,000 miles in a three-week grand tour, which wouldn’t be possible if they were in constant discomfort. ‘The end goal of any bike fit is comfort, power and efficiency,’ says Hallam. If you don’t have all three, something is wrong.

However, Burt does point out that he’s not necessarily trying to achieve armchair levels of comfort when it comes to fitting the very top riders. ‘We talk about sustainability – can they do it all again the next day?’ he says. ‘[Team Sky race coach] Rod Ellingworth once said, “We pay Wiggins far too much money to worry about whether he’s comfortable.”’

One of the biggest controversies in bike fitting centres on the idea that your knee should be over the pedal axle when the cranks are horizontal – the ‘Knee Over Pedal Spindle’ rule, or KOPS for short. Many years ago, bike-building guru Keith Bontrager set it all off with a long article in which he claimed ‘KOPS is only an accidental relationship… the KOPS method has no basis in physics or physiology.’

Today’s fit specialists tend to see KOPS as a guideline or foundation on which to build, rather than as an end in itself. ‘It gives you a reference point,’ says Burt. ‘The Retül number I look at straight away is knee forward of foot and, believe me, you don’t want that to be positive.’

He believes problems arise from fitters elevating guidelines to the status of golden rules. ‘How can one work for everyone? Everyone is so different. Look at Chris Boardman. The reason why he was so aero is that he’s got such short legs and such a long back that he found it easy to get into those very aerodynamic positions.’

There is no one-equation-fits-all solution to bike fitting. So the next time a shop assistant takes your inside leg measurement, taps on a calculator and declares that he now knows your perfect set up, listen to those alarm bells and take your business elsewhere. 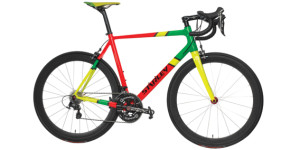 Subtle it’s not, but the reaction to Starley’s eye-catching bike took us by surprise